Here is a redstone map which demonstrates eight advanced and extremely useful redstone creations. Some of the structures include a lock door combination system with a built-in defense mechanism. I’m sure you will be able to use many of these machines to drastically increase the safety and efficiency for your own bases.

Use the keypad to enter a 4-digit code. If you use the correct keycode the door will open. But if you for some reason get it wrong then zombies will fall down in front of you. It’s a really awesome intruder defence system. 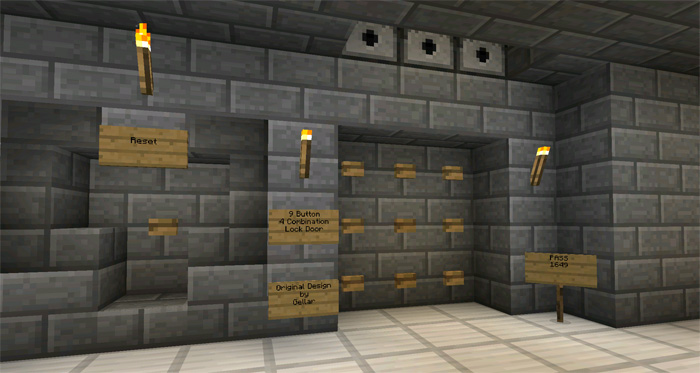 This is a bridge which can be set to two different states. The first (and default) state is no lava. This means you can walk on the bridge without any risk of death. However, if you press on the button you will activate the lava state. This means lava will appear which makes it impossible for anyone to cross the bridge.

On the opposite side of the first Dispenser Bridge there is another looking just the same. The difference here is that it uses water instead of lava.

This elevator comes very handy when building houses and similar. It’s like a smarter version of a ladder because it can be turned and off at your will.

Use the lever on the top of the structure to turn it on and off. It will never run out of water.

This is your perfect weapon against intruders such as skeletons. The machine have one button and one lever. The button controls whether you want to use flaming arrows or normal ones. The lever is used to turning on and off the arrow firing mechanism.

The dispensers will eventually run out of arrows. So you will have to refill it from time to time.

This machine detects if rain is active. If it is, then a redstone signal will ignite a TNT block which will cause an explosion.

Place your items in the bottom chest. Use the lever to turn on the machine. All items will then be sent to the top chest automatically. This process might take a little while. Don’t forget to turn off the lever when you are done.

This is a handy machine to use between your mine and base. For example, you could place one chest deep down in your mine and then another at the top of your base.