Hello there! It’s Rorny, and I have been working on my Minecraft TARDIS for a long time. Now, I have decided to share it with the MCPEDL community for you all to enjoy!

The TARDIS is a fictional spaceship and time machine originating from the British TV show Doctor Who. It is disguised as a small, blue police box but is actually bigger on the inside and can travel in time and space. This Minecraft map is an accurate recreation of the 11th Doctor’s second TARDIS and features its main console room (sometimes known as the Toyota or Neon console). On top of that, this TARDIS recreation actually works! It has many features such as coordinate travel and time manipulation! 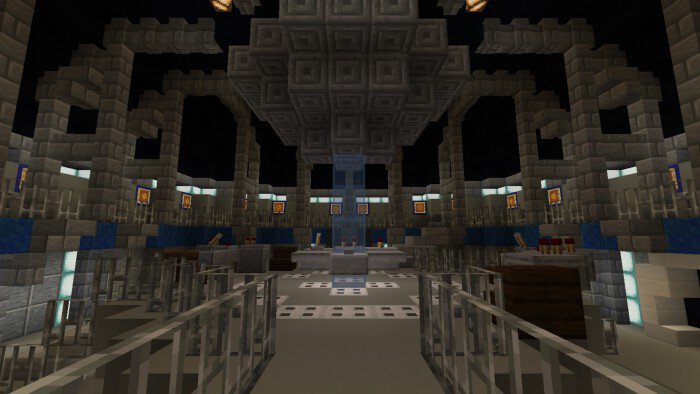 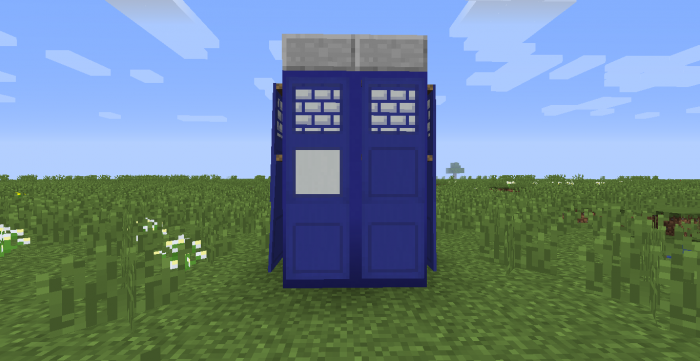 This is a guide on how to fly the Bedrock Edition TARDIS and how to deal with different problems you might encounter while using it. Read it carefully and follow all of the instructions given.

When you open the map, you will spawn inside of the TARDIS. Behind you, there is an iron door as well as a button on the side to open it. To exit the TARDIS, one must push the button and then walk out of the iron door until they are teleported outside. Once outside, it may take up to 3 seconds for the TARDIS to appear behind the player. In the very rare case that it does not (as a result of unlikely amounts of lag), the player may use one of the 64 Stattenheim Remotes in their inventory. The remote, when placed on the ground, summons a new TARDIS at your location. Note that the remote should only be used if the TARDIS does not appear behind you after you exit it!

The TARDIS can be entered by getting as close as possible to the repeating command block located on the back of the TARDIS exterior.

To access the TARDIS GUI, you must go to the underconsole of the TARDIS and locate the spruce-wooden-plank structure in the bottom-center. This structure should have 4 oak-wood buttons on it. Click on the wooden button facing the entrance/exit to get sent to the GUI.

The GUI, in this map, is actually a room containing various buttons and command blocks. The first thing you’ll notice in the “GUI” is an acacia-wood-button with a sign next to it that reads “Go To Page 2.” This button can be pushed to go to page 2 of the TARDIS GUI, which is used to save and load locations (I’ll come back to that later).

To the right of the acacia button, you will find two green command blocks with a sign between them that reads “Insert Coordinates.” As you might expect, these two command blocks are used to insert the coordinates that you want the TARDIS to travel to. To insert the coordinates you want to travel to, first click on the command block at the top. You will be met with the command: “/tickingarea add circle 690 63 690 1.” The first number (690) stands for the X axis, the second number (63) stands for the Y axis, the third number (690 again) stands for the Z axis, and the last number (1) doesn’t stand for anything. It’s just there, and its being there is of the utmost importance. What this all means is that the first 3 numbers stand for coordinates and can be changed to whatever coordinates you want to travel to. After you insert your desired coordinates, you MUST add a number “1” after them (if you don’t, the TARDIS will not land.).

The coordinates you wish to travel to must be inserted into both the top AND the bottom command block, and they must be identical (unless you want the TARDIS not to work).

Next to this acacia button, you will see 4 signs that all read “Save” and “Load.” There is a stone button below and above each of these signs. Each column of buttons and a sign is a “Save/Load” slot. If you push the button on the top of a column you will save the current set location to that slot, and if you push the button at the bottom of the column you will load the location already stored within that slot.

There are two ways to recharge the TARDIS. One is to place redstone blocks at the coordinates 24, 73, -6 (this is a location inside of the TARDIS). Each redstone block will increase the amount of Artron Energy by 50 (meaning one flight costs 4 redstone blocks).

Another way to recharge the TARDIS is to try to blow up TNT inside of it; the energy belonging to the explosives will be safely directed into the Artron capacitor. Each piece of TNT increases the amount of Artron Energy by 10.

If you like what you see, then you can go ahead and download this map to try it out for yourself. It would also be greatly appreciated if you shared this project, gave it an appropriate rating, and gave me some feedback about it. If you have any suggestions for additions/features, please leave a comment addressing those. Remember to credit me and leave a link to this post if you ever use this TARDIS publicly (for example in a server or YouTube video), and please refrain from reposting the map on other platforms. Thank you for your time!

- TARDIS can no longer be charged using coal blocks

Toyota interior has been massively improved:

- More pillars have been added

- Lights are no longer a full block tall

- The block palette of the build has been tweaked

- 3 missing corridor-doorways have been added

- A pattern has been added to overconsole walls

- More light strips have been added on underconsole walls

- Blue has been added to the sides of the upper platform!

Also fixed a bug where dropping the Stattenheim Remote item(s) would spawn in a new TARDIS!

- Stattenheim Remote no longer requires artron energy to be used. Note that the remote is only supposed to be used when the TARDIS does not appear behind you like it is supposed to!

- Changed both download links as they were incorrect. The .mcworld file should now work again!

- Added new feature: the Stattenheim Remote! The remote, when placed on the ground, summons a new TARDIS at your location at the cost of 1000 artron energy (5 times as much as a normal flight would cost you). The remote should only be used in case the game lags and the TARDIS does not appear behind you like it should after you exit it!

- Made some minor changes to the description because there were some small mistakes that really, really annoyed me

- Significantly improved the ending of the description

Mcworld File: Open the Mcworld file obtained from the download link using the Minecraft application. A world called "TARDIS" should appear in your world list in-game.

ZIP File: Extract the ZIP file obtained from the download link and move the resulting folder into this location on your phone: 0/games/com.mojang/minecraftWorlds . Once this is done, a world called "TARDIS" should appear in your world list in-game.