Adventure Expansion is an addon that plans to add more adventure and exploration into the game! As well as fun bosses, cool and powerful weapons and overall a nice experience. The addon is currently in beta and a LOT of the stuff you see here may change or be removed!

The goblin raid is a challenging event where you face hordes of goblins and there are multiple types of goblins. The warrior which uses a sword, the ranger which uses a crossbow, the grunt which uses a poison dagger and a summoner which summons mobs to fight you.

Once the event is over, a miniboss known as the Goblin Beast will summon, defeating it gives you the Goblin Club and a Castle Key Mold. 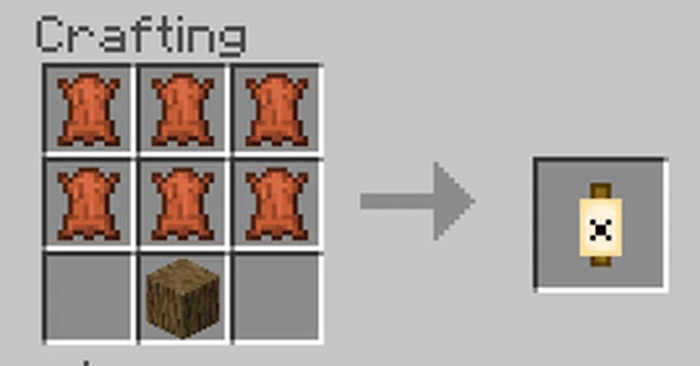 To summon the event, now you must place down the banner (recipe above) and then interact with the banner once you are ready.

The Goblins drop a new currency called Orange Sapphires, these can be used to trade with a friendly goblin! You can find them in their home after this section! 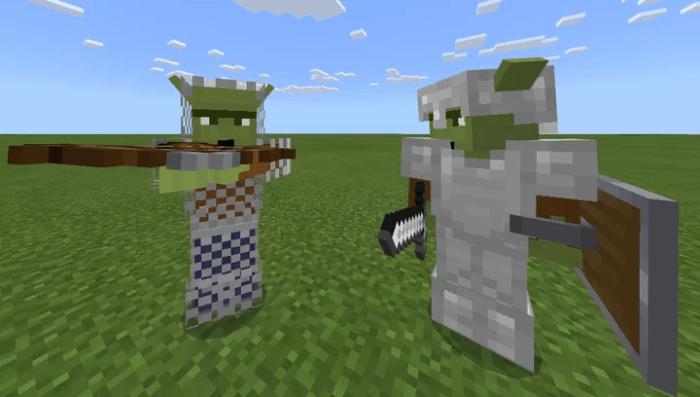 For those wanting a challenge or people who have advanced through the addon, there is a new (Beta 1.4) mode of the Goblin Raid known as the Hardmode Goblin Raid, you must craft a new item known as the Totem of Enraging (recipe below)

Now you simply place down a banner and interact with this totem to activate Hardmode. In this mode there are changes such as:
All Goblins have increased damage and health

Goblin Grunt Poison is now 4 seconds instead of 2

Goblin Summoners can now spawn up to 6 Blocklings

Once the goblin raid is completed and you have some orange sapphires, you can go trade with the passive goblin for some good loot! You can get some enhanced steak, mini cake balls, a goblin dagger and the most valuable of all, the friendly blocking pet summon! A pet that gets stronger the longer you have it on your side. (Tame it with a diamond) 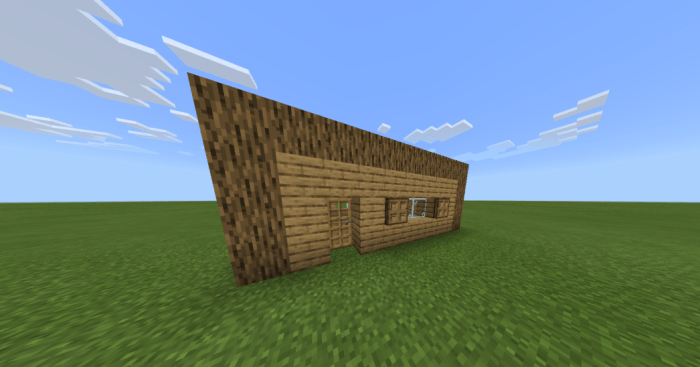 The Dragon’s Den is a new structure that is found underground, it contains a mysterious egg that can be hatched by breaking it and placing back down and waiting 4-5 minutes. Once this dragon hatches, you can either wait until it grows up or feed it steak or cooked porkchops, once it is grown you can tame it with steak or pork. After the dragon is tamed, you can ride it and take to the skies! 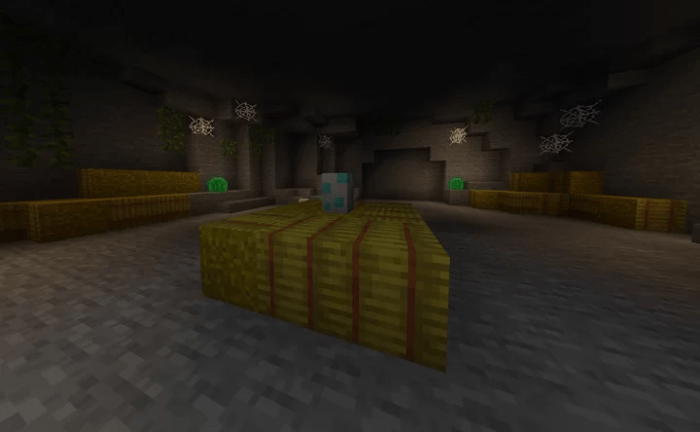 The Battle Tower is a new structure that is commonly found in the overworld, you need a tower key to enter it. To obtain a key, you must go through dungeons and mineshafts to find a key mold, surround the mold with 8 gold to get a tower key! 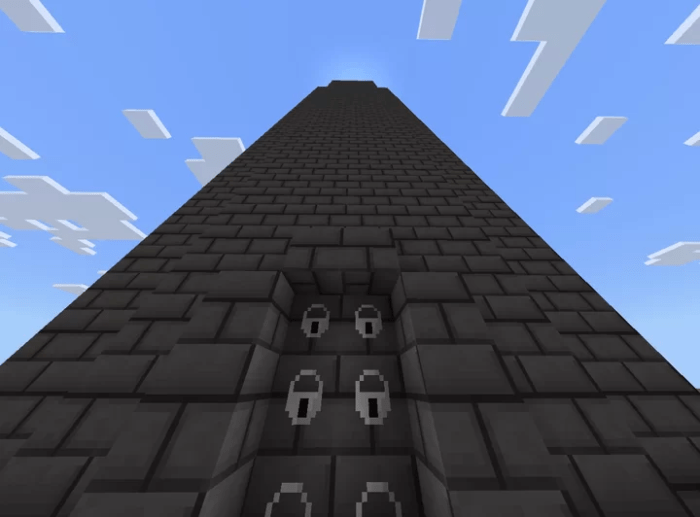 Inferno is a stronger variant of the blaze and has a appearance similar to the cancelled “Hovering Inferno” from Minecon 2017, this mob shoots out stronger fireballs that do more damage. It’s melee attack is also much stronger. They drop “Inferno Fragments” which can be used for a Flame Staff. 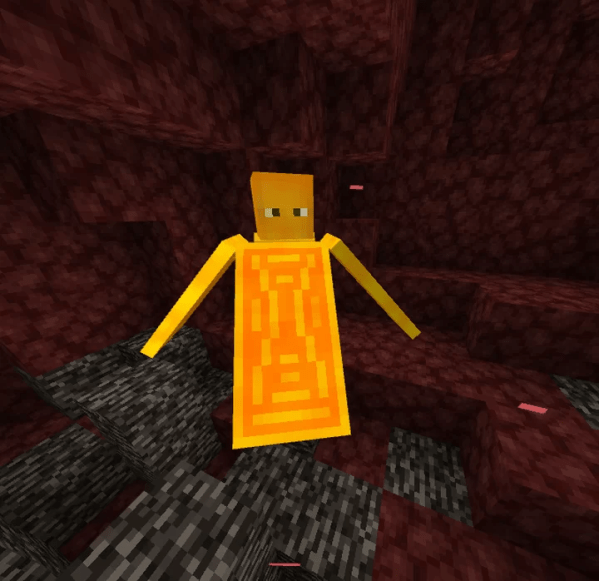 Magic is a new mechanic found in this addon! To get started with magic you’ll need to cure a Zombie Wizard, these spawn commonly and are cured the same way as Zombie Villagers. (Weakness and Golden Apples). Once cured, you can trade with the wizard for some basic magic stuff. Such as the Mana Brewing Station, which requires three levels and you have to hold lapis. Then you interact with it and it will fill up with a blue liquid, interact once more to recieve mana.

All magic weapons use this mana as a ammo system, just put the mana in your offhand whenever you wanna use it!

Storing XP is now possible! You can obtain it from a wizard for some orange sapphires! 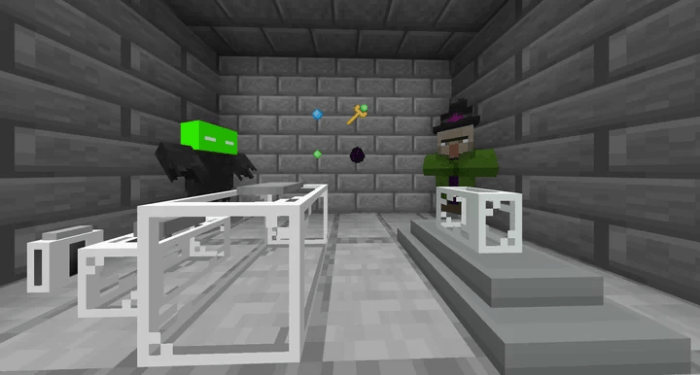 Platinum, a new resource that’s between iron and diamond, you can make Platinum Armor with it and also create a Castle Key with a castle key mold. 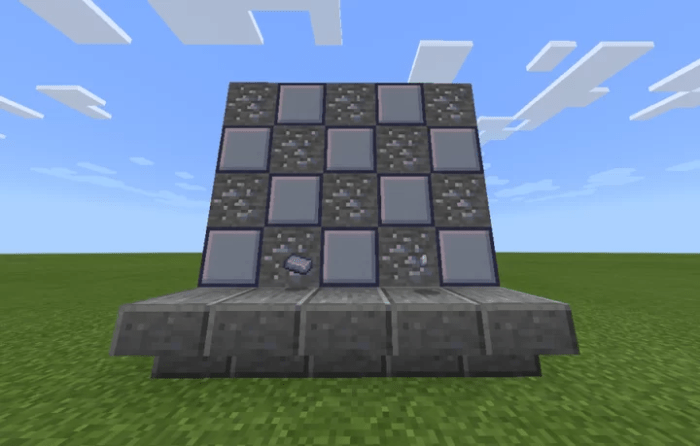 Once a Castle Key is obtained, you’ll be able to place down the key and summon the castle! There is a mysterious egg that needs to be interacted to summon the Blue Dragon boss. This boss once killed will drop its scales and bones, which can be used for the Blue Dragon Armor.

There was a workaround for this bug, what you need to do is to edit the world and take out the packs, then you save that change and on the world select screen, edit the world again and put the packs back in. This should make structures spawn in new chunks. Reminder that you’ll need to do this everytime you wanna load up the world.

Updated the discord server invite since someone told me it expired.

Updated description to be unique.