Hear that? That is the sound of mobs all over your world fleeing their caves and their Woodland Mansions and their Ocean Monuments for anywhere on the planet that has no Apache Gunships. They know they have no chance. If you can afford one! Save up those emeralds! You’re gonna need ’em….

Alrighty, this gets complicated, I better pay attention. You should too.

You’ll need to find yourself a Bronson (look for shady dudes with a camel); deserts are your best bet but they do hangout in savanna biomes as well. The price? The tidy sum of twenty (20) emerald blocks.

2. Fuel up that Apache

Just like in real life, they run on netherite ingots. I could be wrong about the real life thing. It should only take one, maybe two ingots, and they never run out. You’ll know it’s fueled up when you see love hearts appear around it in the air. Uh, nothing like taming, not a bit. Ok, this is just like taming. At this point you can hop in and fly around. But you’re gonna want some guns, ain’t ya.

Ok, if that Bronson’s still around, see if he’ll sell you a minigun or multi-barrel rocket launcher, fun times. One will cost you four emerald blocks! Expensive. The Apache can carry four of them, but he’ll only sell you two, tops. You’ll need to find multiple Bronsons to truly unleash the beast.

Bronson is looking to expand his weaponry range, so stay tuned for more ordnance.

Ok, this is the complicated bit. To load the weapons on to the Apache you need to put the Apache in ‘loading mode’. To do this, ‘sit’ the Apache – like you’d sit a tamed wolf (note you can’t load miniguns onto wolves, could be a fun addon though). The rotors will slow right down, this means it’s in loading mode. Then put the weapon down in front of one of the wheels. Right here: 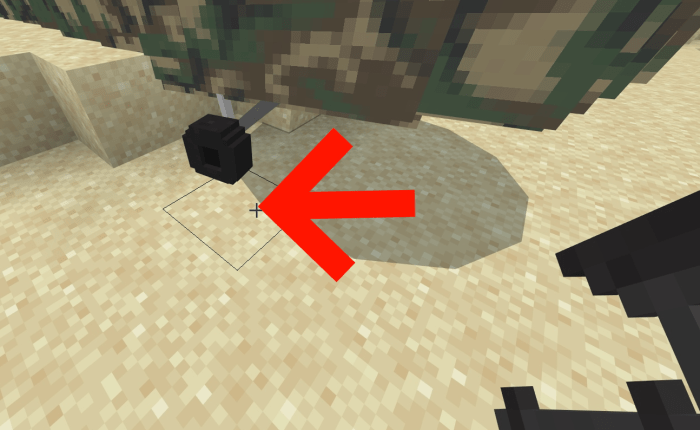 Practice, practice, practice. If the gun doesn’t attach, chop it up and try again. (They drop a spawn egg when you ‘kill’ them, so don’t worry, your investment is safe.) Yes, this is way too complicated, agreed. You could try watching the video, but those guys never show anything useful.

The final step is to blast everything. So, ‘unsit’ the Apache (the rotors will speed up, ready for flight), hop in and go for it. Especially satisfying shooting down hawks. (I knew their time would come!!!) The weapons will shoot ‘monsters’ automatically. Not endermen and probably not ghasts. I don’t know what it is with ghasts.

Oh I just had a crazy thought – take on an Ender Dragon. I must do this. 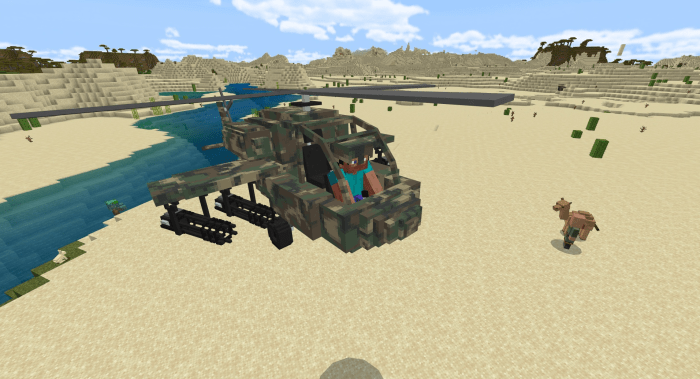 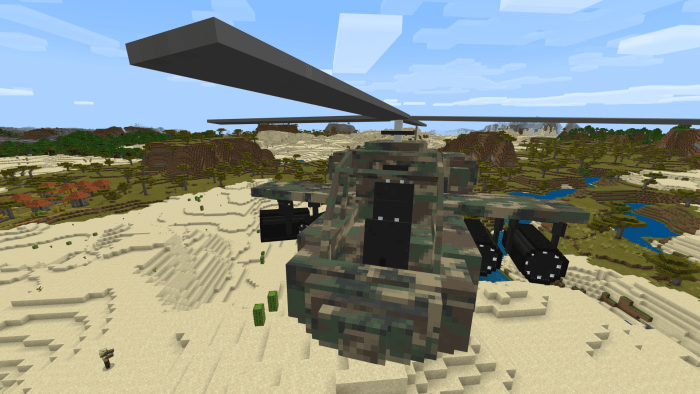 All of our packs here!
Our Youtube channel here!