This is a map and addon which lets you try modern hunting in Minecraft. The bow has been replaced by a rifle both by textures and sound. And most of the mobs have been replaced and now include everything from bears, deer and buffalo. You can also wear camouflaged hunting gear. It’s a well rounded hunting map which is actually really fun to play!

The spawn is in a small hunting cabin located in an open plains biome. It’s great to have somewhere to return to after a long day of hunting. Anyways, once you feel ready it’s time to head out and start hunting!

You don’t necessary just have to hunt. It can get tiring after a while and then it is nice to relax with some fishing. 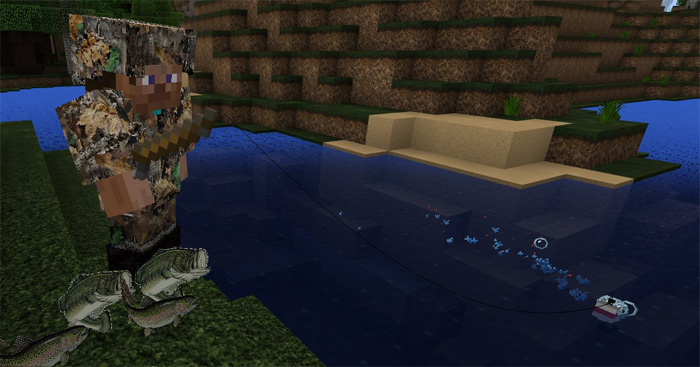 You’ve got to be careful. There are many different animals which can be found in the forests. Black bears are just one of many.

You can also spend your days doing some buffalo hunting.

Some of the mobs included here are not really ones which exist in real life. Unless, of course, there is some secret lab which I don’t know about which has been mutating cows.