Big Machines is a mod which adds three new machines to the game. The machines aren’t just one block. Instead you have to build a large structure consisting of several blocks. Each machine is powered by a new type of fuel known as coke coal and it can only be obtained by using a coke oven. This means the machines aren’t overpowered. Instead they are nicely balanced while offering amazingly efficient ways to produce certain things.

The first thing you want to do is to build a Coke Oven. It can produce Coal Coke which is refined and more efficient version of coal. This is a type of fuel which is used for powering all the machines.

For this structure you will need the following blocks:

Now place two blocks of coal on the inside of the oven. Then use a flint & steel on the Oven Controller to light it up.

After a few seconds the coal blocks will be turned into Blocks of Coal Coke (ID: 233). Use a pickaxe to mine the blocks. Then use a crafting table to craft the blocks into Coal Coke (ID: 1605).

After you’ve produced a good amount of Coke Coal it’s time to build your first machine. The Blast Furnace can triple the amount of gold or iron ores which are placed in the machine.

Then continue by building a structure which looks as seen on the images down below.

Place a Blast Furnace Controller in the top-center of the structure. 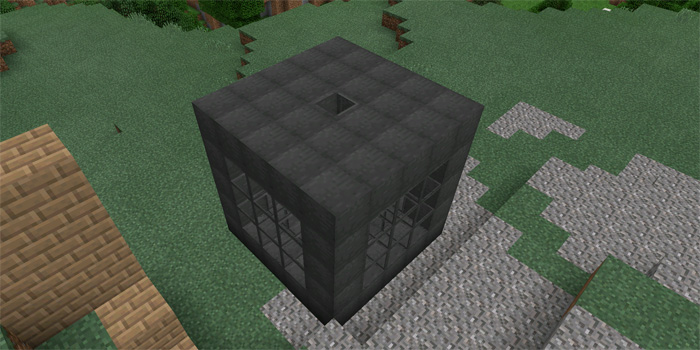 To use the machine you will need 27 iron or gold ores and 16 Coke Coal.

Tap on the the Blast Furnace Controller with the ores and then tap on it with the Coke Coal to fuel it.

After 2 minutes or so the ores will be replaced with the blocks. In our case, gold blocks. Tap on the Blast Furnace Controller to retrieve the blocks.

The greenhouse can be used to farm more more efficiently.

Build a structure which looks like the one as seen in the images down below.

Make sure the chest is located just as seen on the image down below.

You can grow four types of vegetables: wheat, carrots, potatoes and beet. Place the seeds in the chest. In this case I put 8 carrots in the chest. Simply tap on the Greenhouse Controller with 6 Coke Coal to activate the greenhouse machine.

Every 20 seconds 8 new vegetables will be added to the chest. You can also see the growth in the greenhouse itself. But to collect the harvest simply grab the vegetables from the chest.