The Command Block is incredibly useful because it can be used for executing text commands in Minecraft. And it’s only triggered when there’s a redstone signal active. The block can process javascript and custom commands found in other mods.

It’s one of those features which the PC version of Minecraft has by default but is not likely to be an official part of Pocket Edition for a long time.

The Command Block (ID 137) can be obtained by using the creative inventory. It’s a block which when triggered by a redstone signal can execute both javascript and custom mod commands.

In this example we will be using the commands available in the X-Commands mod to explain how you can use redstone and the Command Block to switch time between day and night.

Begin by placing down the first Command Block which will be used for activating night-time. Tap on the block to set the command to use. Here you can also enter JavaScript, e.g.: javascript: Level.setRainLevel(1); – this would turn on rain

Then place down the second Command Block and let’s set it to execute the day command. 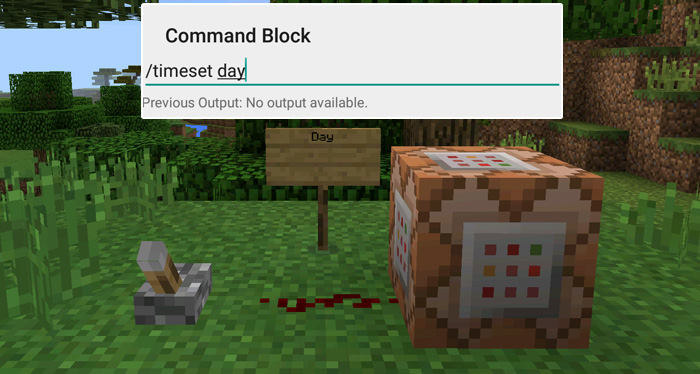