DireCraft is an addon which aims to provide an intense survival challenge for the player. Most of the mobs have had their behaviors changed to make them very dangerous. There is really no time for being idle because everything really comes down to the survival of the fittest. Give it a try and see how many nights you can survive.

Most of the changes aims to make the mobs more dangerous and more difficult for the player to defeat. Two things most of them have in common are that they drop better items and also remain hostile for a longer amount of time.

Spider: It has more health, runs faster, stronger attacking, stays hostile for a longer period of time and inflicts a venomous weakness effect on its attacker.

Cave Spider: It has more health, runs much faster and stays hostile for a longer time. Be careful with these as they inflict a poison effect.

Creeper: It’s not faster, about the same speed as the player, it also has more health and causes a small fire if it explodes.

Silverfish: Even though it’s one of the smallest mobs it is stronger, faster and has more health than before. Inflicts mining fatigue on its attacker. Sometimes it drops iron ingots.

Wolf: Wild wolves, as those two seen in the image, are hostile by default. If you tame one it will be friendly. They have a more powerful attack, more health and drop bones if they die. 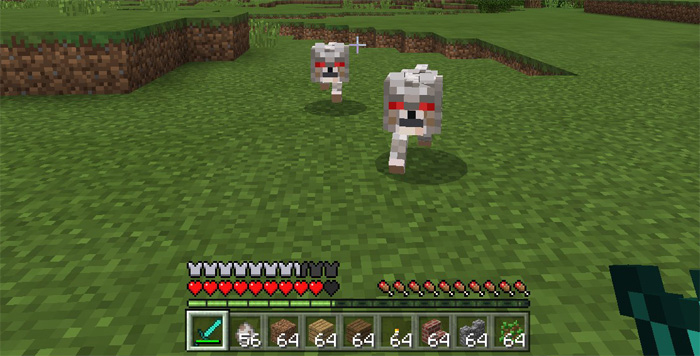 Zombie: It has more health, runs faster and attacks stronger. Sometimes it inflicts hunger on its enemy.

Skeleton: It has more health, runs and shoots arrows faster. It can also shoot from a longer range.

Enderman: Teleporting works a little bit different to make it more difficult to get to and kill. It has more health, it’s faster and stronger and inflicts blindness effect on its enemies. It stays hostile for a longer amount of time.

Guardian: This mob swims faster in water, it has more health and also stronger attacks.

Elder Guardian: It’s even stronger, faster and has even more health than the guardian.

Magma Cube: The Magma Cube does more damage, it’s faster, has more health and has the chance of dropping nether wart.

Wither: This boss is much more dangerous than before. It has more health, it is faster and causes bigger explosions. It shoots skulls faster and more accurate and now they also cause fire.

All of the mobs down below are friendly.

Important: Turn fancy graphics off while in the Nether to prevent crashes.