The DiseaseCraft PE mod adds diseases to the game which will increase the difficulty of the survival aspect. Two of the three diseases can be cured with medicine while the third one can be deadly if you are unlucky.

Currently there are three different diseases which you as a player can get. If you get one you’ll slowly notice symptoms which will determine the disease and cure.

The Medical Journal is a craftable item (recipe found in the item list further up). Tap on the ground with the journal item to read it. It will give you access to most of the information you will find below.

The world around you will start looking weird and confusing. In other words, your field of view settings will be changed which will cause a scary experience.

Your speed when running in-game will drastically decrease. If you try to swim in water you’ll get hurt.

This disease is the most deadly one as it got no cure as of yet. To begin with it will slow you down when you try to move and the death rate is set at 50%.

The disease is spread by black rats which is a new mob in the game. Acutally it’s not an entirely new mob as it’s silverfishes which have got their textures remodelled and name changed.

For influenza and rabies there is a cure. It can be crafted with 1 bucket, 2 sugar and 1 redstone.

The cure item is called Medicine [acetaminophen] (ID: 502). Each cure got four uses. To use it, simply tap on the ground. 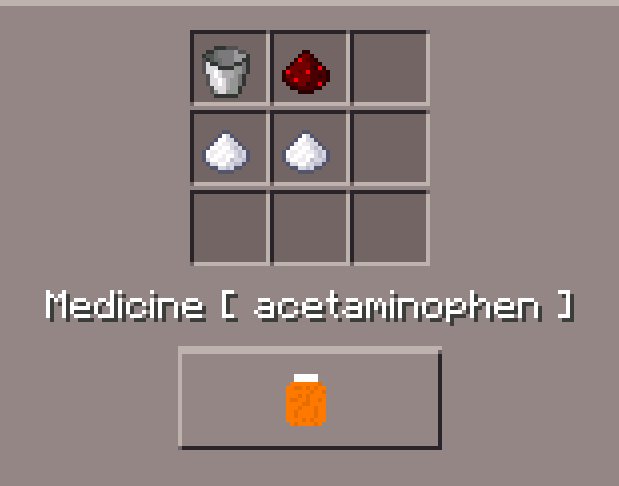