This is to date one of the most advanced TARDIS creations for Minecraft: Bedrock Edition. The TARDIS is fully functional and can be used for traveling to several different planets which exist in the Doctor Who universe. The planets include locations like Skaro, Gallifrey and others. But that’s not all, it also adds 10 new mobs to the game such as the Dalek and the Time Lords!

The TARDIS (Time And Relative Dimension In Space) is a time machine and spacecraft which you can use to travel to a whole hoop of different planets and locations. You can swap between 17 different control rooms which each got different functionalities. It’s recommended to spend some time inside the TARDIS before heading out there to explore the rest of the universe.

Gallifrey: This location includes a big terrain but the main attraction here is the Citadel. At the Citadel you will find hostile Time Lords and the Sisters of Karn, so be careful. At the lower level there will spawn villagers and if you are lucky a robot dog will spawn. 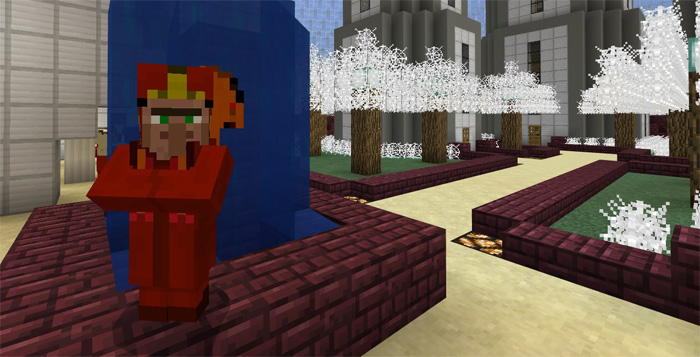 Skaro: This place is perfect if you are in need of mining Dalekanium. There are a lot of spawners around the Daley City so be careful.

Mondas: A frozen waste land with abandoned villagers and a large factory which you can explore. The Cybermen are hiding a secret beneath the factory. A lot of spawners here so make sure you don’t go here unarmed.

Trenzalore: Go and visit the Trenzalore Graveyard and pay your respects to fallen friends. This is an imported Nether biome. 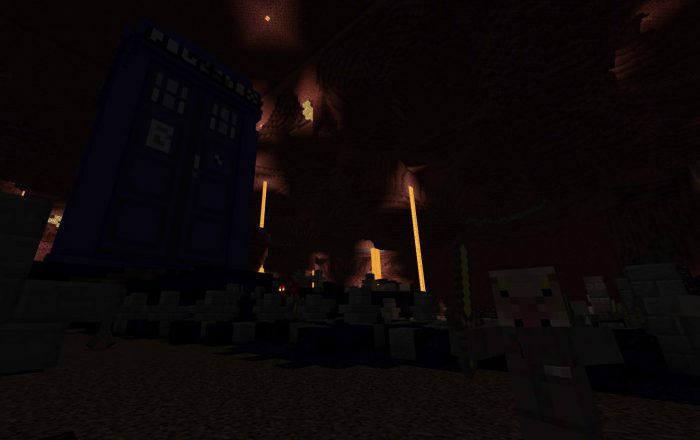 Mars: Visit a copy of the Bowie Base One, complete with a crew, but minus the killer water. Go out on an adventure and explore the deserted landscapes to see what Mars has to offer. 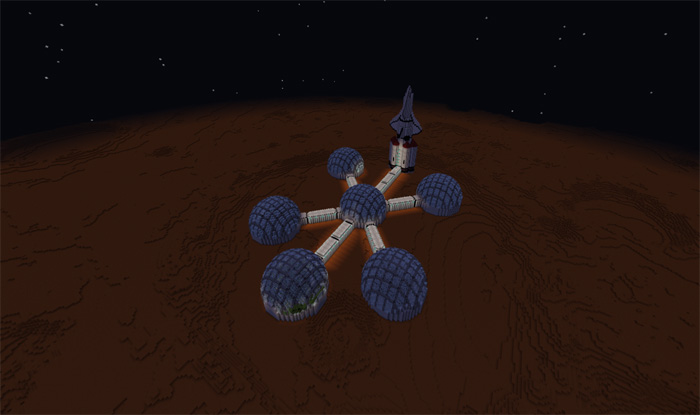 The Moon: Go to a small lunar base. There are some minerals, but be careful and watch out for the local pests.

Important Notes: Mondas and the Moon are setup so that there will always be night when you travel there by the Tardis. It won’t rain on Mars or the Moon. The haze in the far distance in the sky is a layer of glass to keep out the rain.

Most of the maps are imported from Java Edition. Here’s a full list of credits.

Just reuploaded the files for the Sonics, Tardis block textures, and the Tardis exteriors. Map file is greater than the 50mb limit.

Removed the custom stonecutter texture as it is being re-purposed in an upcoming update to the game.

Added a new block. Utilizing an unused stone ID to re-add the custom texture that was previously used for the stonecutter in the 13th Doctor's console room. A full stack of the block is available in the Super Secret Stuff room. It can also be acquired by using one of two commands. Command 1: /give @p stone n 7 (n equals the number of blocks you wish to received). Command 2: /setblock X Y Z stone 7. The block is in the texture file and named stone_white. The Tardis Block Textures zip has been updated to include the new block.