The Dungeon Pack Mod adds 16 randomly generated dungeons to the game. Most of them feature some type of mob spawner and usually a chest filled with treasures. It’s a great addition for exploration in Minecraft as it expands on things which you can discover. It’s also a great challenge as each structure will be guarded by hostile mobs.

All different types of dungeon will generate at random in your worlds. The generation frequency is quite high which causes the structures to be spawned very often. However, some structures only spawn in certain biomes, e.g. the igloo in snow biomes and so on.

Here is a floating village and a floating island. They are part of two separate structures.

This big structure spawns in the overworld. It’s like a giant portal to the Nether.

Here’s an ice fort which has one chest and a skeleton spawner in its center.

This igloo isn’t really a dungeon. It’s much rather a shelter since it doesn’t have any monster spawners.

Press the back button to open the game menu. Then press the Dungeon button in the bottom left corner of the screen to open the dungeon settings tab. Here you can disable spawning for certain structures. You’ll notice quickly that some structures spawn quite frequently. That’s why this option is really useful.

These settings are global. This means they will save even when entering a new world. 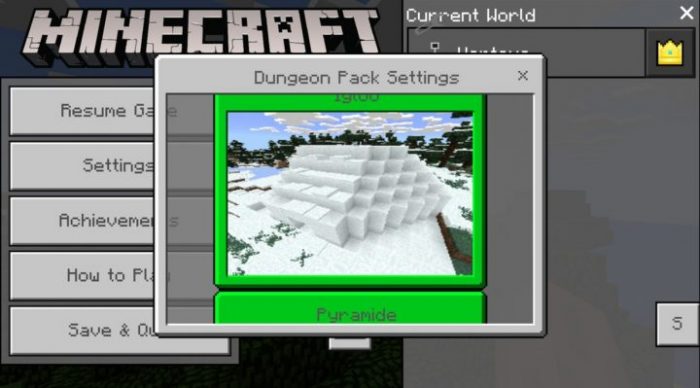 There are more dungeons to be found than the ones mentioned in this post. But since it’s quite difficult to find all of them and you might want to explore some for yourself we won’t post them all.