Time for some big ol’ elephants, Elefantes grandes! And they can be all yours. Well, not the ones I’ve already tamed. They’re mine. If I can remember where I put them. A room somewhere….

Find these majestic beasts in Savanna Plateaus (such a hard word to spell) and Desert Oases (lake in a desert, basically). Tame them like you would horses, sit on them. Except all elephants (well, all of these elephants) don’t like players! Yes, that includes you. They don’t like you. Don’t worry, they don’t like me either, I learned to get over it though. Just give it some time and you’ll be fine. Time heals everything and all that jazz….

Where was I… Oh! They don’t like you, so they’ll attack you. If you get knocked off, they’ll attack you. You can’t tame the smaller guys, so, watch out for them. Once tamed, put a saddle on them (funny how horse saddles fit other animals) and if you have gold horse armor, that’ll fit just fine. It will also reduce fall damage and prevent most melee-type damage. Projectile and magic are still threats.

They jump like elephants! Which is to say, they don’t really jump much at all, you’ll see.

You can heal them with wheat, melons, apples (maybe?).

The forgotten beasts of the ‘Elephant’ addon, we have the Hippopotamus. And if you think I had to look up how to spell that, you’re exactly correct. Spotted, hunted down and tagged by a keen-eyed odarmamx (check out his channel here), even though they were invisible.

Not any more! Find them in any river system except cold/frozen. Not tameable but you can breed them with carrot, beetroot or potato. Not hostile except when confronted with a drowned. (Just like real life.) 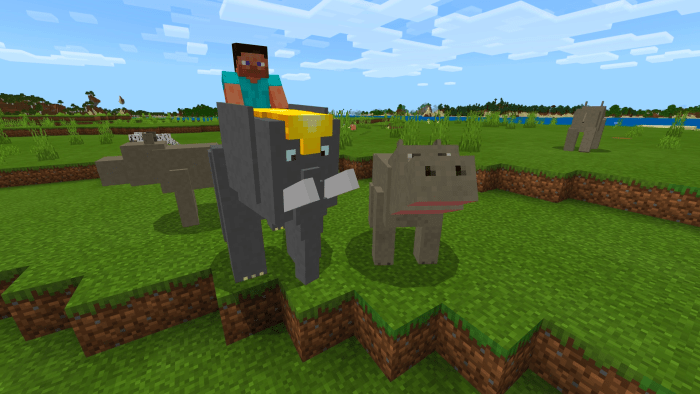 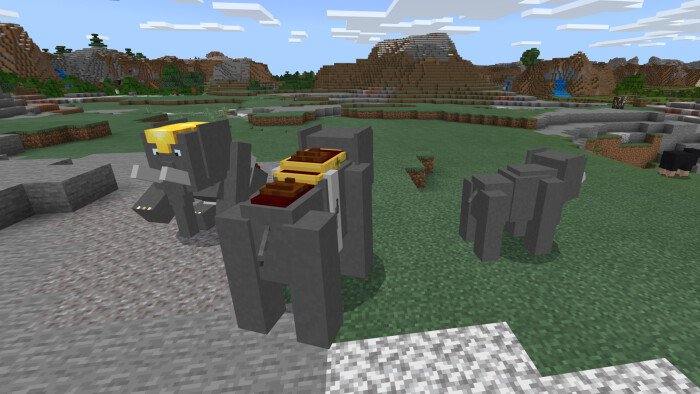 Turned on those hippos! Thanks, again, to odarmamx - who noticed these invisible beasts were actually spawning.

Increased elephant health (thanks to Sse for the suggestion!) and made them eat baked potatoes. I bet they do in real life. Who wouldn't..???

A number of minor changes; tried to make the elephants less aggressive after taming, only partially successful. Slight changes to spawn rate (down slightly) and speed (up slightly).