The Ender Chest is a useful block in the PC version of Minecraft which yet haven’t been implemented in Minecraft Pocket Edition. Unless of course, you choose to install the Ender Chest mod which give you access to two new items which can be used to craft the chest.

The Ender Chest is much more useful than an ordinary chest as it’s magically linked and synced with any other Ender Chest you place down. This means you can have the same items and blocks stored in the same storage on multiple locations. 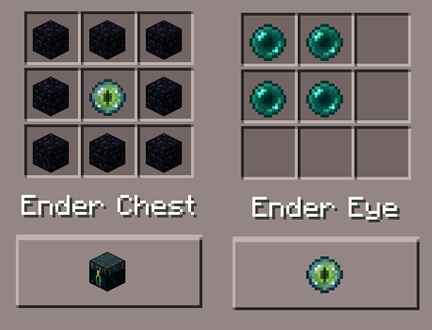 What is it good for?

To find use of this mod you will need to have at least two Ender Chests. Place down each Ender Chest at two different locations. Whenever you load anything into one of the chests the other will be linked and synced and store the same items.

Here is us testing it out. The first chest is placed down at the beach and in it we store 56 obsidian and 63 crafting tables.

The second chest we place on top of a hill far away from the first chest. When we open it to have a peek inside the same items are stored in that chest.

You can craft how many Ender Chests you want and have them placed out on multiple locations. It’s really handy if you don’t want to carry a lot of items in your inventory while mining or out adventuring. Instead just keep a couple of chests in your inventory and place them when you need something.