Evil Night is an add-on suitable in particular for Halloween. It adds (or rather changes) 12 different mobs in Minecraft Pocket Edition to make them look very scary and also behave more dangerously. Try one of the horror maps on our website to use with this add-on or use it for one of your survival worlds. It’s a great way to add some horror to your game!

All of the mobs are hostile and most of them have got new behaviors to make them even more frightening and dangerous than before. If you kill one they will drop some candy.

The Killer (replaces zombie pigmen) is a bloodthirsty psycho. He carries an iron axe and is quite strong.

The Mad Scientist (replaces skeletons) is a short guy wearing a lab coat and safety goggles. He’s hostile and shoots large fireballs at his enemies.

The Mummy (replaces husks) has evil red eyes and is wrapped in something which looks like bandages. It is very strong but also very slow.

The Zombie is much stronger and holds a shovel in his hand. If a zombie horse is spawned it will ride the horse.

The Witch has a complete new suit and on his left should he has got a small spider pet.

The Demon (replaces strays) is strong and shoots fireballs.

The Cave Spiders are much smaller and more realistic looking.

The Slenderman (replaces endermen) is a tall man in a black suit usually depicted with no face features.

Dracula (replaces wither skeleton) is a vampire who’s very fast but quite weak.

Frankenstein is spawned the same way as an iron golem. Build a structure as seen down below with iron blocks and place a pumpkin on the top center block.

The Frankenstein boss (replaces iron golems) is very strong and usually there’s a Mad Scientist sitting on his shoulders. 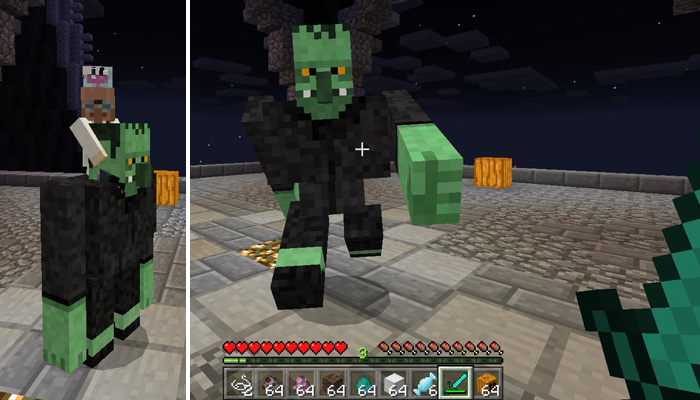