Feed the Structure - Unique Survival Game With A Unique Goal

Are you bored of playing casual survival maps? Then maybe you want to play some crazy survival with a unique goal? Then this map is for you.

Feed the Structure is an adventure survival map where you have to collect blocks to feed a certain bedrock structure and save your world from absolute destruction.

The structure spawns mobs and generates structures that can:

- distract you while playing

- pose a problem to fight them off

- provide you with infinite amount of food, which you don't need to worry about

Meanwhile, it gives you extra effects and enchants such as:

Go - through, elements of the game

Those are the blocks that you will normally aim at to finish the map quickly. As you see, there are many possible strategies and go-throughs on the way to finish the map. Choose your own playstyle and have fun.

Here are some screenshots from the game(no big spoilers):

This is the starting spawn: it's a capsule as the adventure part of this map contains context of a map that I might submit in the future - You come back to Earth after you had left it, because there were numerous wars on the planet that put it into crisis. Now you land on Earth hoping to watch its beauty again, but it turns out that you will watch it being massacred by a strange bedrock structure.

Notice that the capsule is made out of wool that you can later use to make e.g. beds. 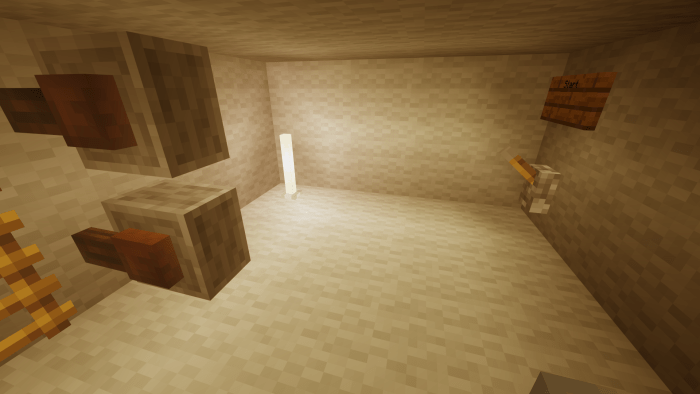 Terrain around the capsule: 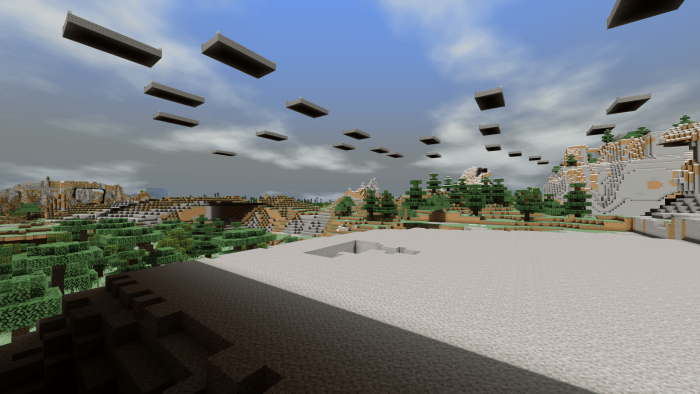 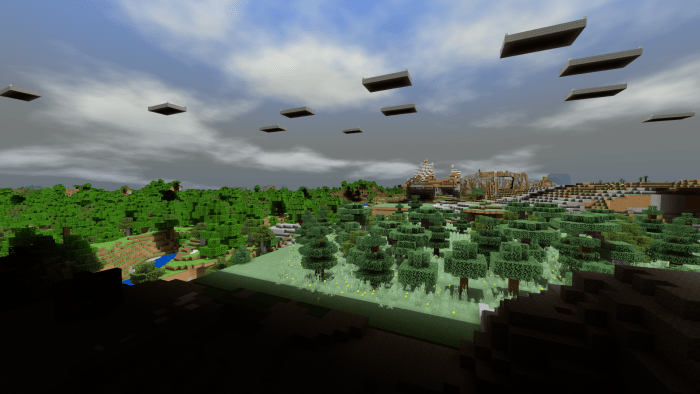 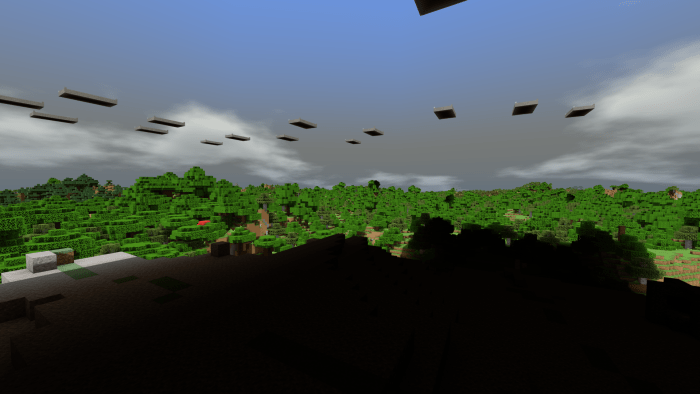 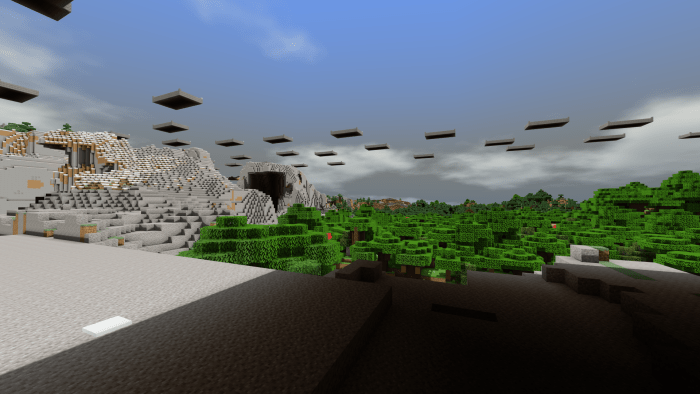 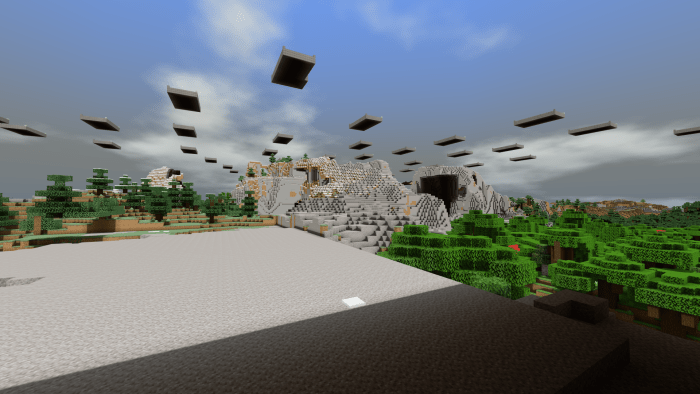 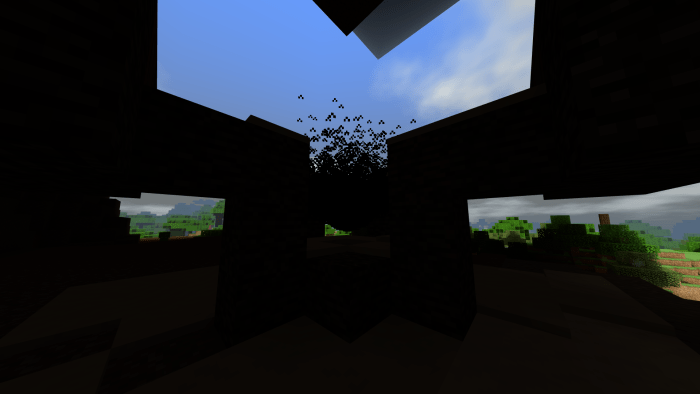 - spawning chickens over you 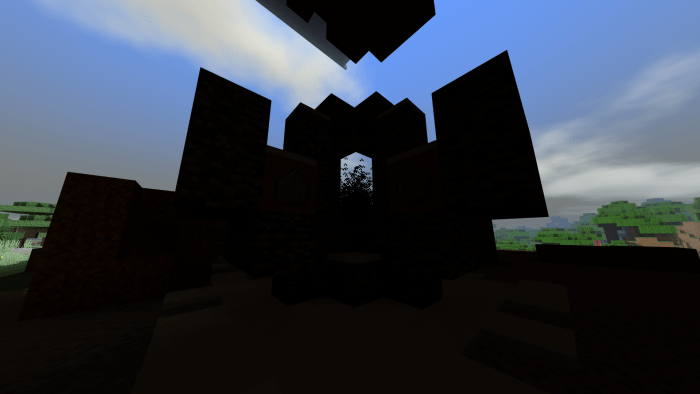 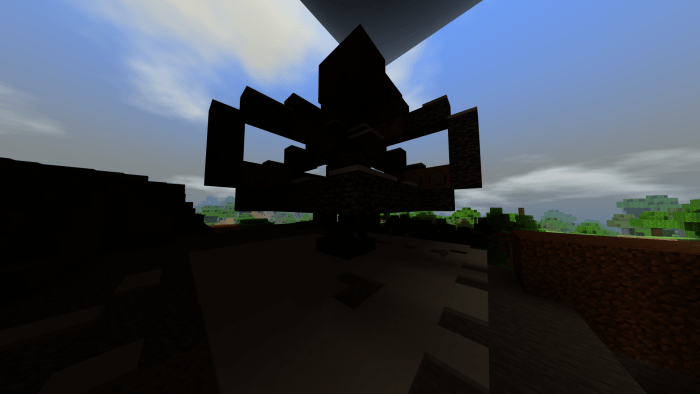 - generating structures out of dirt and lava in ocelots' positions

- generating structures out of logs and bee nests in bees' positions 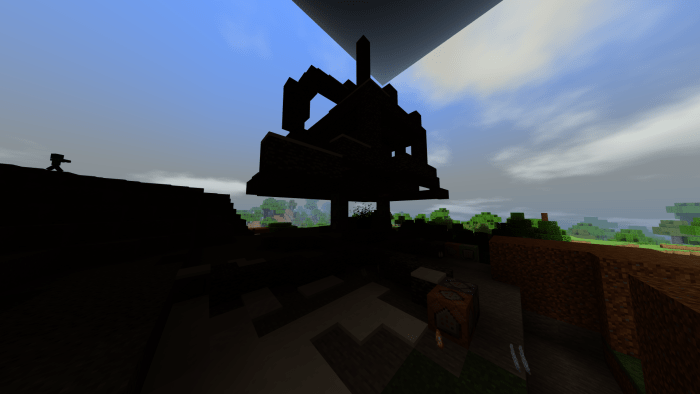 - generating structures out of tnt, leaves and dirt in creepers' positions 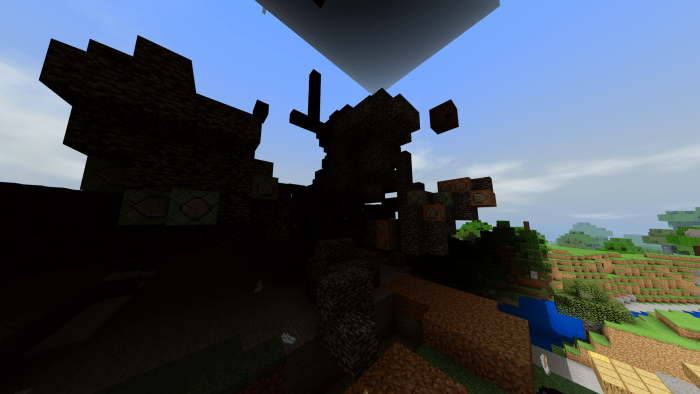 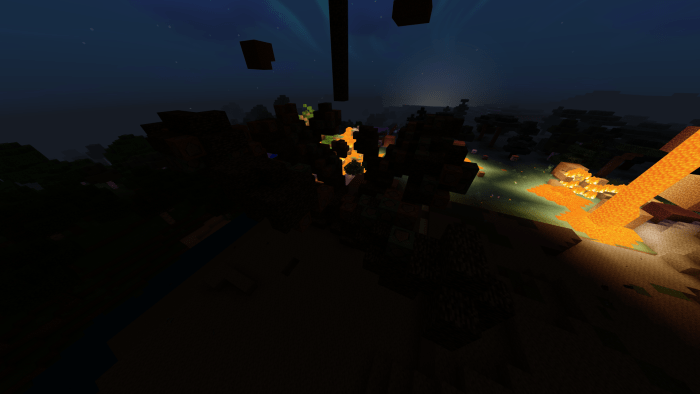 Destruction caused by the structure:

Here are some photos of the world haunted by this structure: 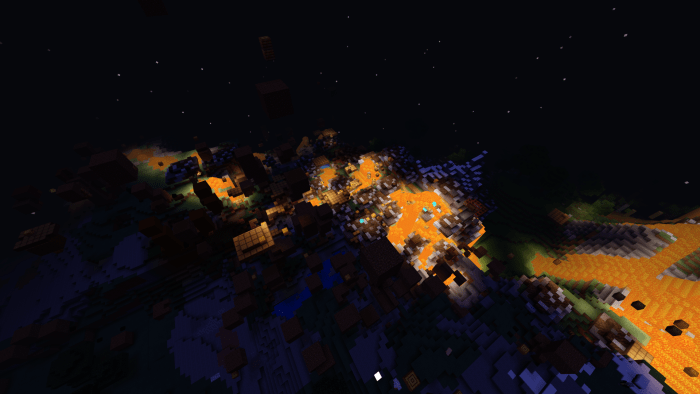 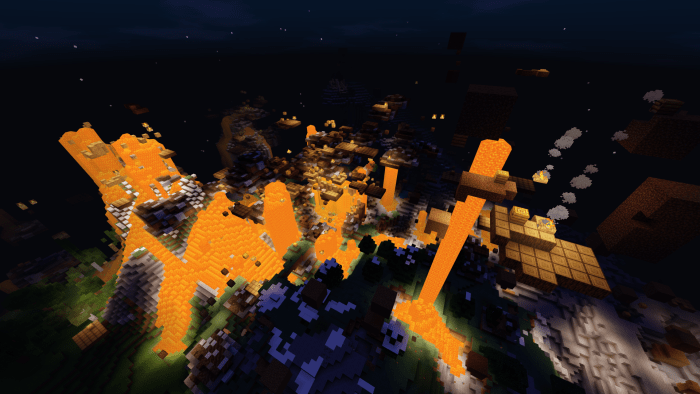 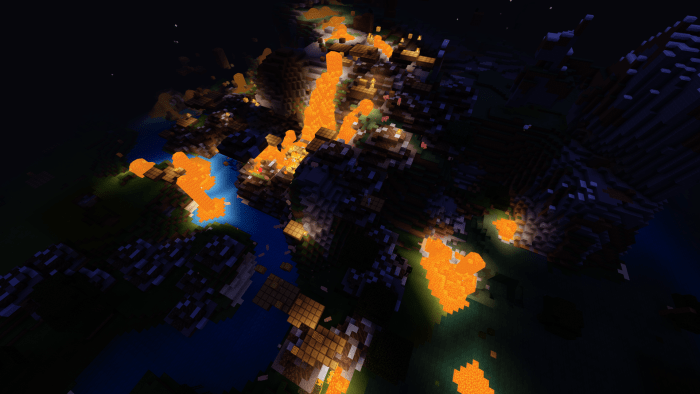 A few screenshots from the game: 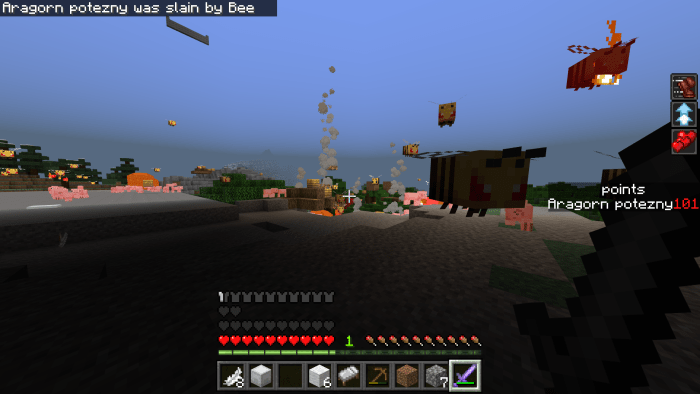 So many pigs and bees 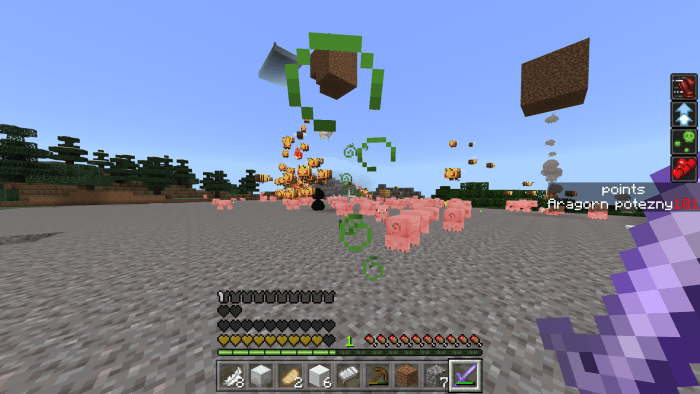 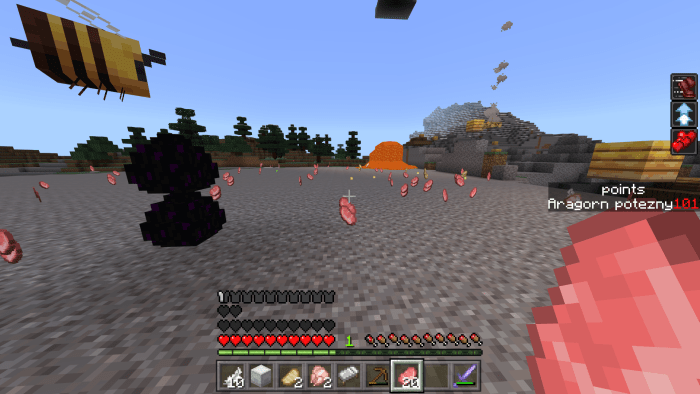 No need to worry about food 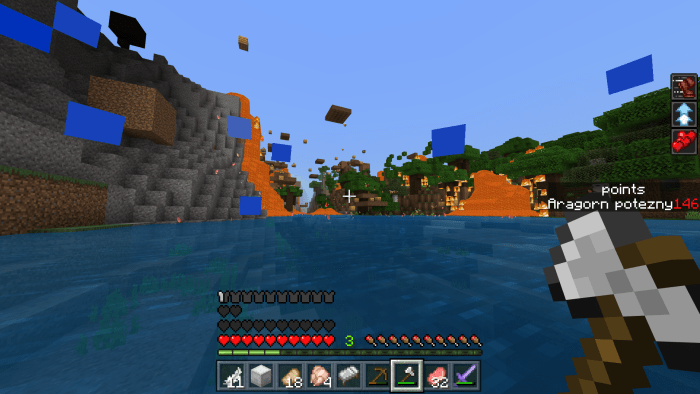 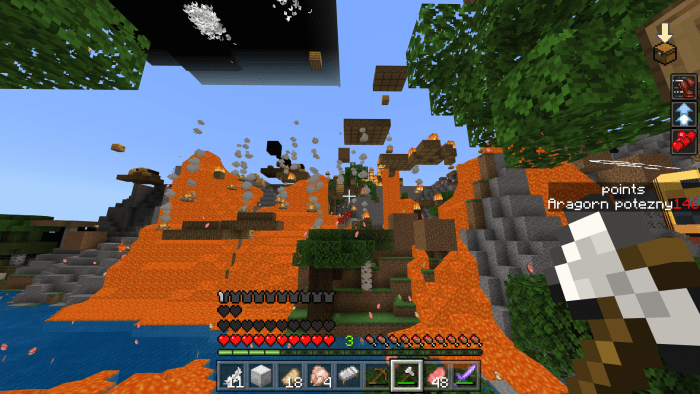 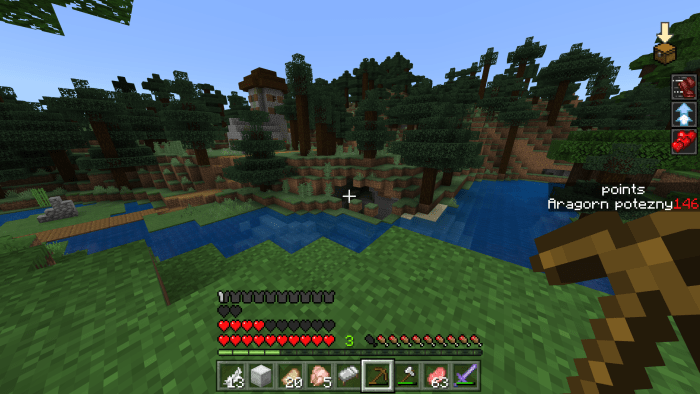 If you find this cave, this is a cave where I found 17 diamonds and much more... 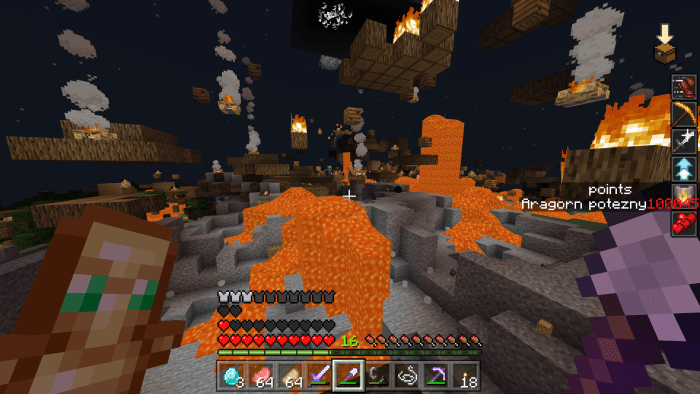 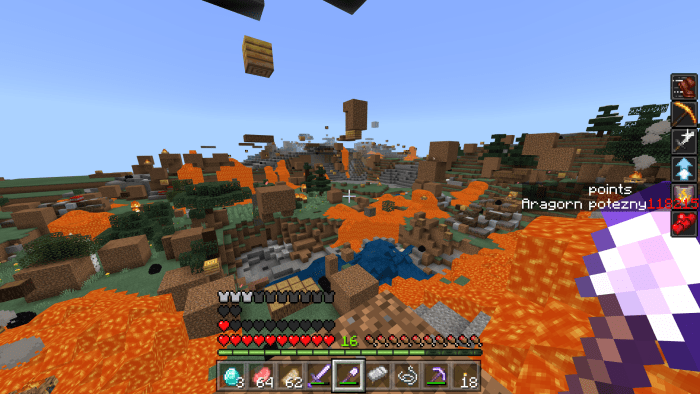 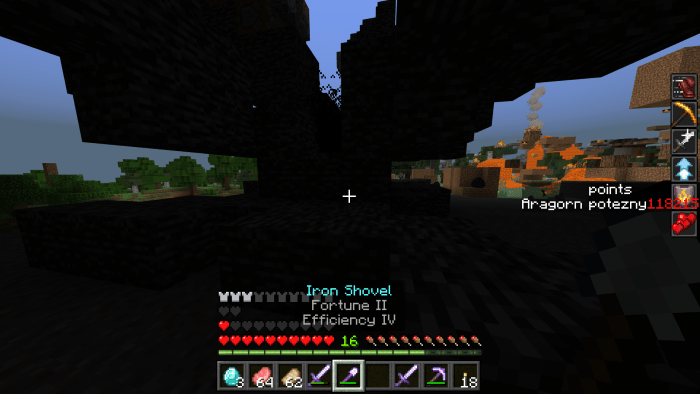 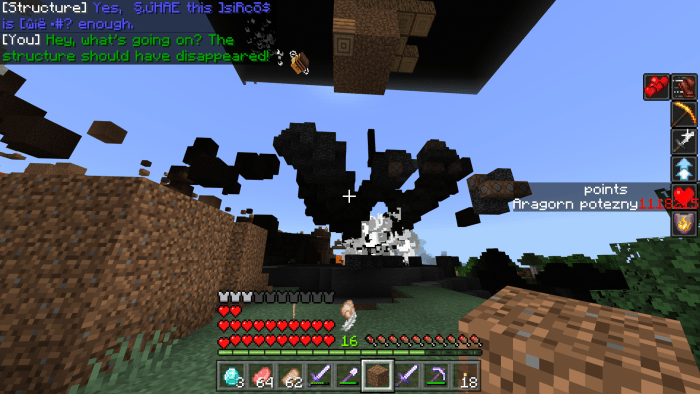 A clip from the game

Gamerules set themselves automatically throughout the game, but you can only choose manually the status of gamerules keepinventory and doweathercycle. By default, both are set to true.

All mods and addons used by this map belong to its rightful owners. Credits are displayed at the end of the map to avoid spoilers.

You can play on this map with most addons adding some survival features such as Arkcraft 8.1, Prehistorical weapons addon, etc.

More detailed information and download link to the map on my blogger.com page (click the link below to go to that page):

- added redstone block as a consumable

- placed some concrete in the swamp

- spawned more villagers in the villages

- changed the enchant knockback to depth strider on structure level 3

- placed some wheat blocks near the main bedrock structure

- increased the pointal value of bone blocks to 5.000 points

I spent tens of hours making this map also to make it errorless; please put it on the front page of mcpe dl

You can both use the direct download links that use adf.ly to get the .mcworld or .zip file or you can go to my blogger.com page and download the map there (there will be more detailed information about the map on my blog).

2) Reach the adf.ly page (microsoft edge might not support adf.ly, so you might need to use other browser)

6) Open the file to import the map to minecraft

November 09, 2020 at 5:40 am
Did you use any additional addons while playing this map? Tell me about them. I also want to inform that I might be willing to use Arkcraft 8.1 addon for a longer version of this map where you would have to collect 10mln points instead of 1mln. Would you be willing to play such a longer version of this map - with 3-6 players? Do you have any concrete suggestions how to improve this map or want to report bugs? Feel free to express your thoughts openly.
Log in to Reply

November 09, 2020 at 5:36 am
Tell me here if you managed to complete the map or you were unable to, you ran out of patience? Did you have fun playing the map or were rather irritated? Precise if you enjoyed it. Did you play this map with your friend/were you willing to do it? Did you have fun playing together?
Are you willing to try out new strategies/playstyles/go-throughs or is one-time game enough for you? Is it one of your favourite adventure/survival/game maps on mcpe dl? Do you believe it has a bright future and I should work on other versions of this map/upgrading this primary version?
Log in to Reply

November 09, 2020 at 5:32 am
Also the film has been deleted, here is the link to the working one:
https://www.youtube.com/watch?v=FiW_bbjxKyE
Log in to Reply

November 09, 2020 at 5:25 am
Sorry I accidentally set the .zip download link as unaccessable. The .mcworld file is accessable as well as the link on the blog should be. You can send me a request to give you access to the .zip file and I'll give you the permission.
Log in to Reply

November 09, 2020 at 5:26 am
First click on the link and reach the target page, there you will be questioned to ask for permission.
Log in to Reply

September 28, 2020 at 12:27 pm
Map idea is very interesting, at first I thought this was one of CTM kind but it just similar to. But in the last level or many other level. You seem lacking of level build though. It seem like that you do wanna try this idea out as fast as possible. So the map level design is pretty like not finish look like a quick work. So if you found it good or wanna improve any I do say that fixed your map level might be a good idea.
Log in to Reply

September 15, 2020 at 2:34 pm
The only way to keep your content on the front page is to constantly update it. All new content appears first. While you may have spent 10 hours on this, some addons/maps take multiple days to make. It is a great idea for a map though.
Log in to Reply
Report Comment
Follow:
Login Sign Up Submission
Tweets by MCPEDL
Tweets by MCPEDL