The Hulk Addon introduces two new mobs to Minecraft. The first and most known one is the Hulk. He’s a fictional superhero with an extreme physical strength. The second mob is the Hulk Buster. He’s basically the enemy of the Hulk and it’s actually quite exciting watching the two fight it out in a battle. Both of the mobs can be ridden and controlled (to some extent) by players.

Build a structure as seen below with four iron blocks. Then place a pumpkin on top of the structure as a head to spawn the Hulk.

The Hulk is a neutral mob which will only attack you if you provoke it. You can mount the Hulk and then ride it similarly to a horse. The Hulk main purpose on this world is to defeat evil and this include hostile monsters. He is also hostile towards the Hulk Buster which is another mob this addon implements. 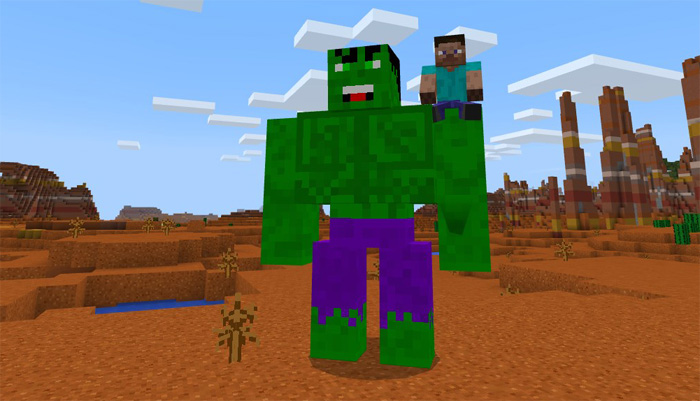 Spiders, zombies and any other hostile mobs can expect to get beaten up by the Hulk! He’s merciless. 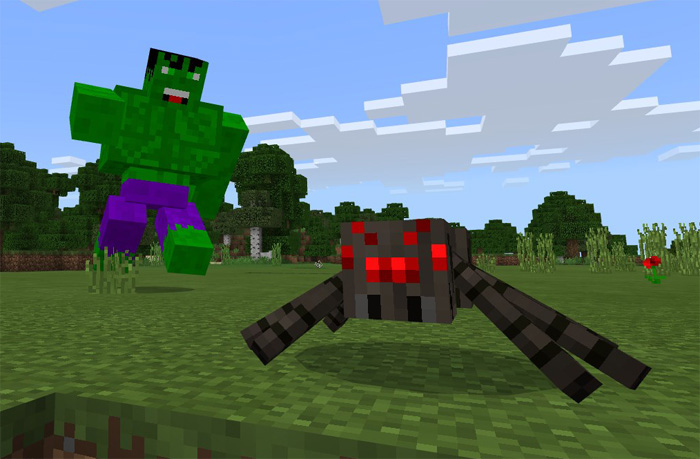 Most of the mobs in Minecraft have no chance against the Hulk. However, there’s one exception and that is the Hulk Buster. It’s basically a robot which looks quite similar to Iron Man. Players can ride the robot and use it for either just walking around, flying or to attack other monsters.

The Hulk Buster has been engineered to be able to fight the Hulk. It is its sole purpose in this world. Just remember to use the activation items as mentioned above or else it won’t do much. Also.. you might want to stay out of their fight — it gets very dangerous quickly!