The Illusioner is a mob first introduced in a 1.12 snapshot on the java edition of Minecraft but was never completed. He was later re-added and retextured in the new Minecraft Dungeons DLC: Creeping Winter. So now, this add-on finally brings him officially into the game. The mob is an illager type and spawns in little campsites in the ice plains biome kind of like how it does in Minecraft dungeons. It will attack you as well as villagers and iron golems by creating cloned versions of itself. Not only that but he has a lot more health than the average pillager making him a mini boss like the elder guardian. 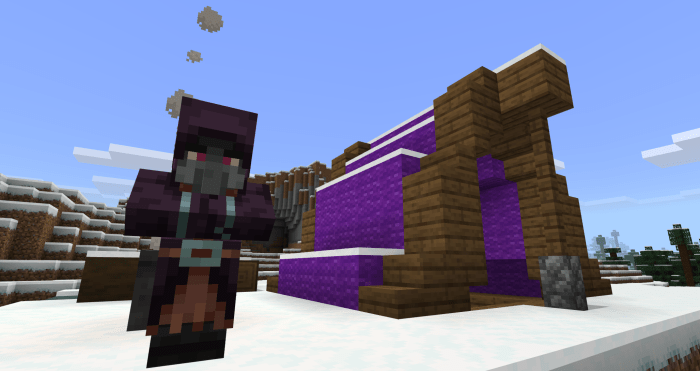 When you first encounter the Illusioner he first starts by turning himself invisible and reappearing with multiple versions of himself. The Illusioner and the illusioner clones all wield a crossbow (Was originally a bow in the other games but I had to change to meet certain requirements with the addon) The clones shoot regular arrows while the original Illusioner shoots fireworks arrows.

The Illusioner will spawn in campsites that can only be found in the ice plains biome and taiga biomes (Mainly to reduce frequent spawning) From there you will see a tent, a campfire, and a cauldron with a potion of invisibility inside enough for 3 bottles!

Illusioner will drop his crossbow, the “Illusioner Crossbow” with multishot and quick-charge 3 on it. I thought when finding the perfect drop for him that this would suit well since it does seem like the arrow is creating clones of itself. The Illusioner also drops up to 4 “Potions of Illusion” and when drunken will inflict the player with invisibility and teleport them away. Fireworks and up to 6 emeralds are included. I wanted to make it seem worthwhile since he is so rare and has lots of health. 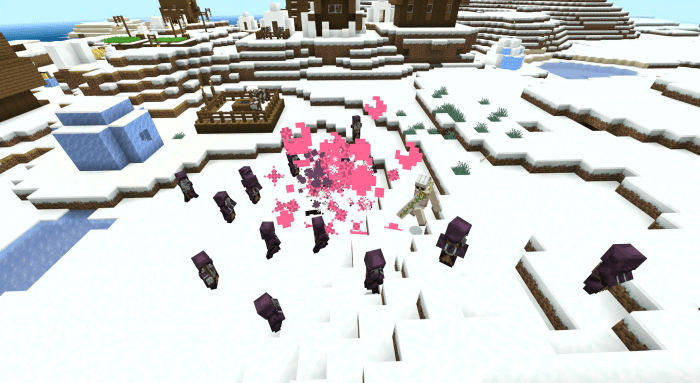 The Illusioner attacking an iron golem with his clones.

Please do not steal and publish this add-on, thank you 🙂

Vanish particle was changed to a greyer texture