Do you want to eat Indonesian food? Now you can. By using this addon. These addons add to Indonesian specialties such as rendang, soto, fried noodles, and many more. Even the ghost 👻 Indonesia, and the weapon

Meatballs are generally made from a mixture of ground meat and tapioca flour, but there are also meatballs made from chicken, fish, or shrimp and even buffalo meat.
A. Crafting: 1. Cooked beef 2. Egg 3. Kelp 4. Bowl 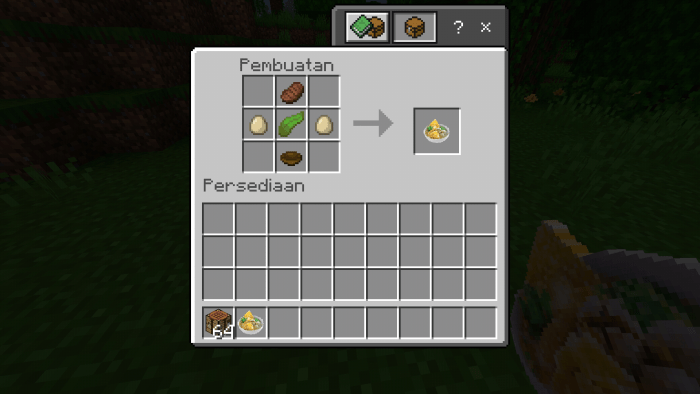 Another food from Indonesia is Gado-gado, which is vegetables that are boiled and mixed together, with peanut sauce or peanut sauce and mashed accompanied by egg slices.
A. Crafting: 1. Egg 2. Kelp 3. Bowl
B. Effect: Haste 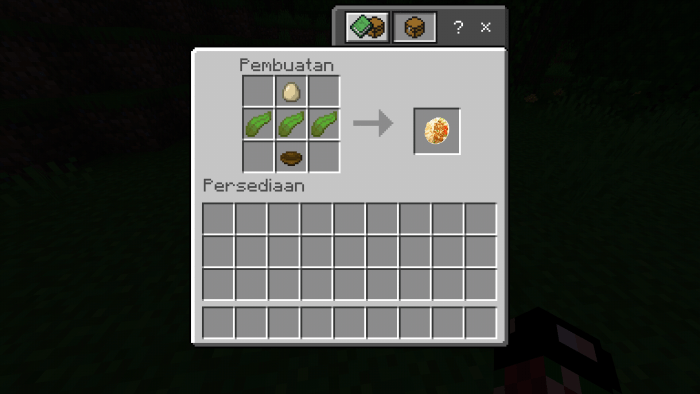 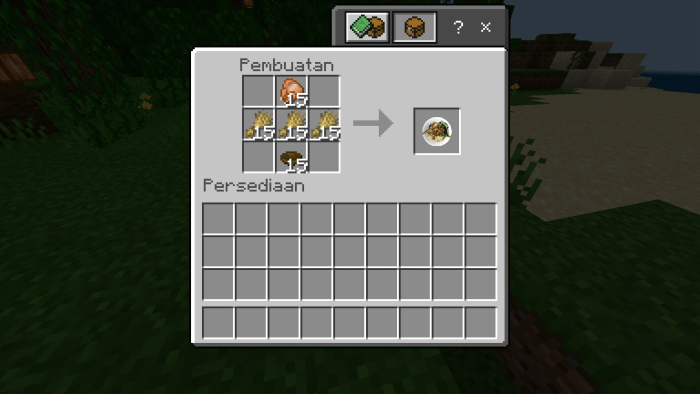 Fried rice is a food in the form of rice that is fried and stirred in cooking oil, margarine or butter, usually added with sweet soy sauce, shallots, garlic, tamarind, pepper and other spices, such as eggs, chicken, and crackers. 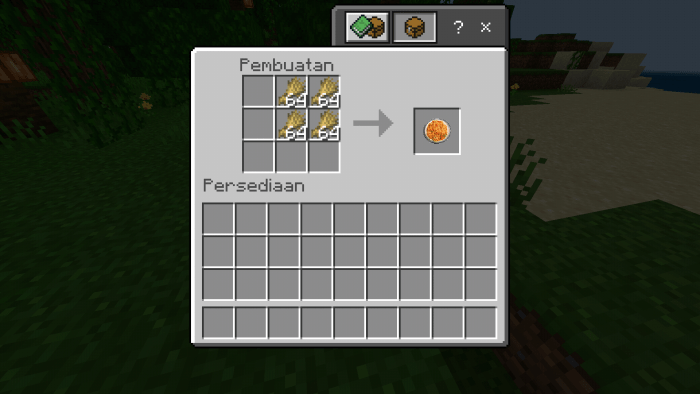 Rawon is a black soup with a mixture of special spices using kluwek. 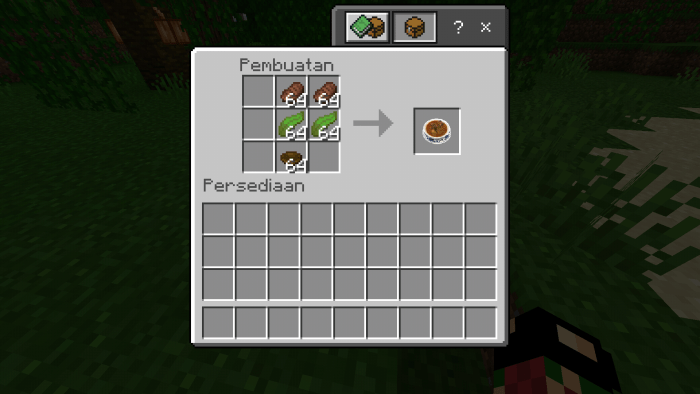 Another typical Indonesian food, namely Rendang. This dish is produced from a long low temperature cooking process using various spices and coconut milk. The cooking process took hours until all that was left were the dark black cuts of meat and bran.
A. Crafting: 1. Cooked beef 2. Kelp 3. Bowl
B. Effect: Strength 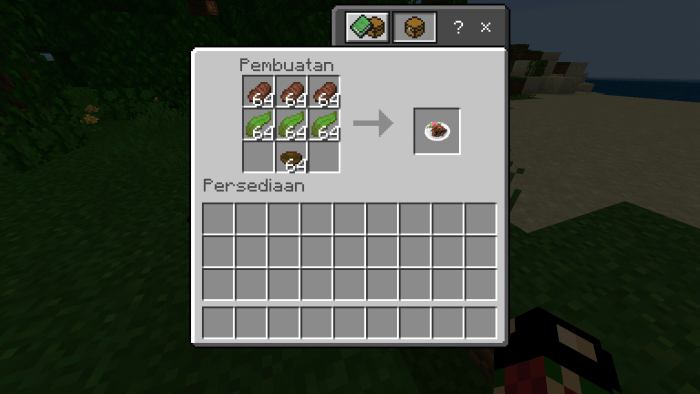 Sate or satai is food made of meat that is cut into small pieces and skewered in such a way with a stick of bone, coconut or bamboo leaves and then grilled using wood charcoal coals. 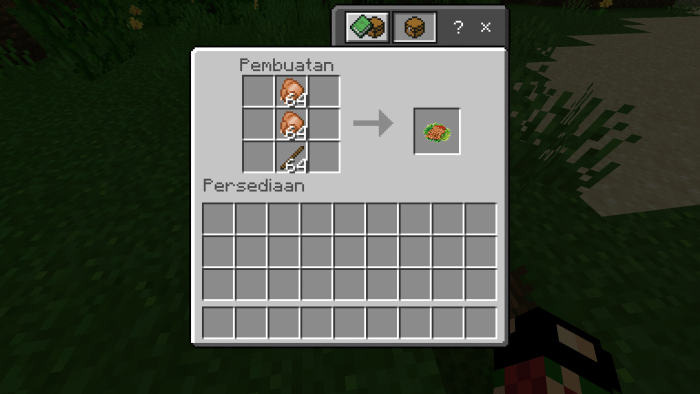 Soup made from meat and vegetable broth 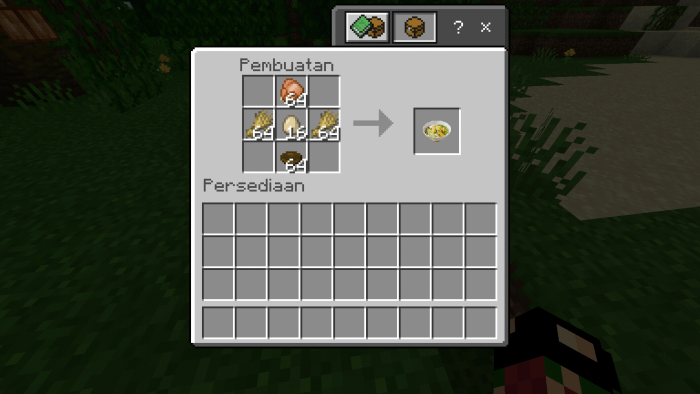 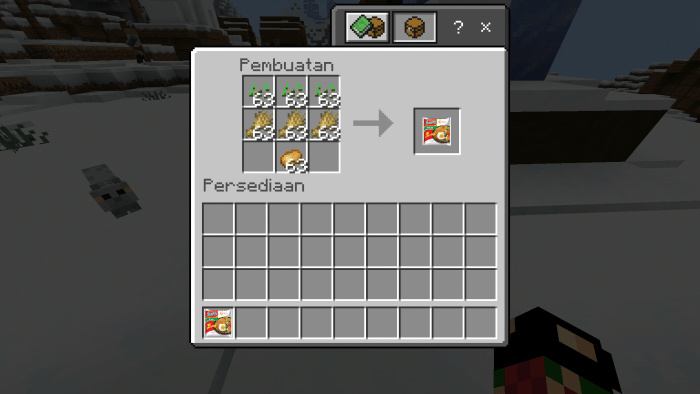 A. Crafting: Cook fried indomie, can use furnace, campfire, and smoker 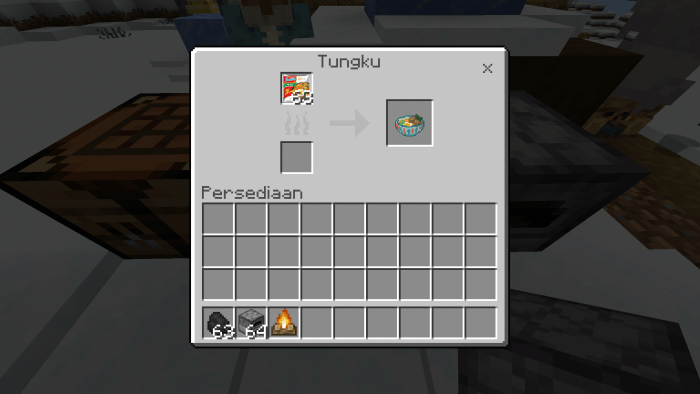 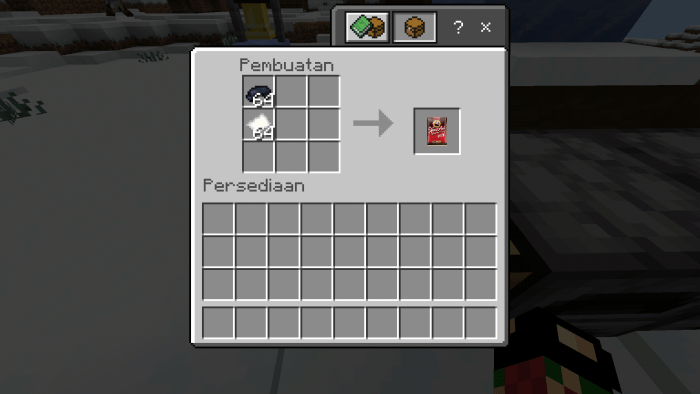 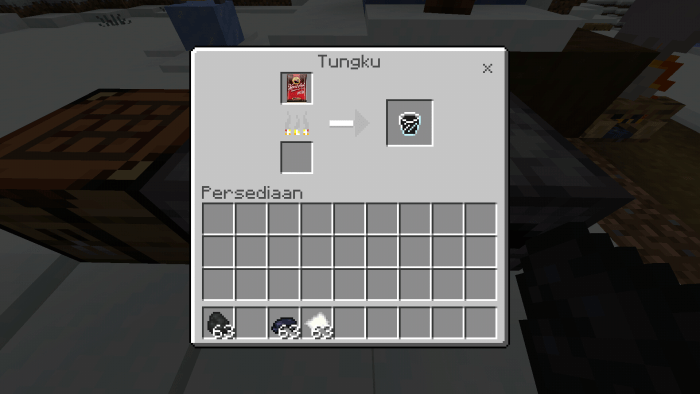 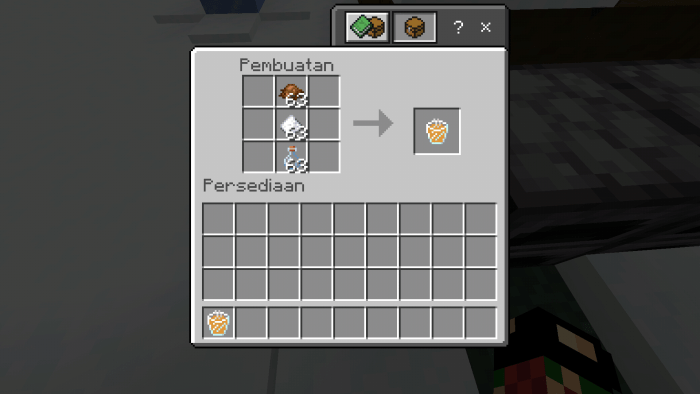 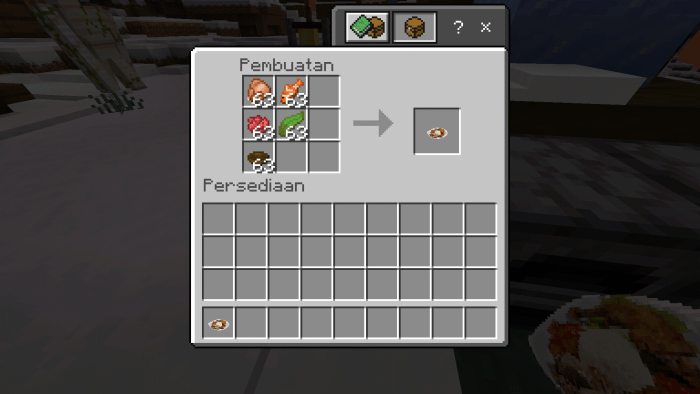 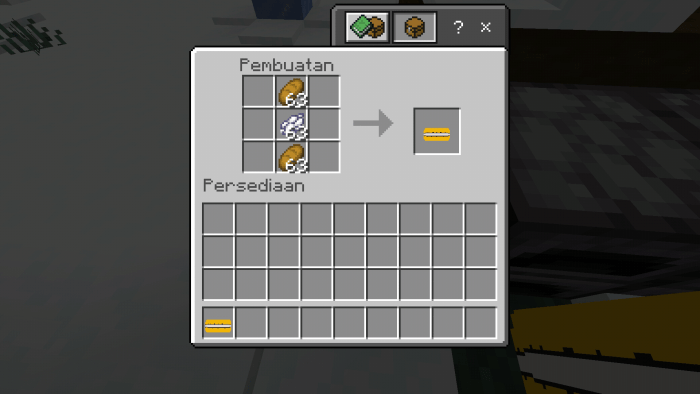 Nasi Uduk is a food made from the basic ingredients of roasted white rice and steamed with coconut milk, and seasoned with nutmeg, cinnamon, ginger, lemongrass and pepper. 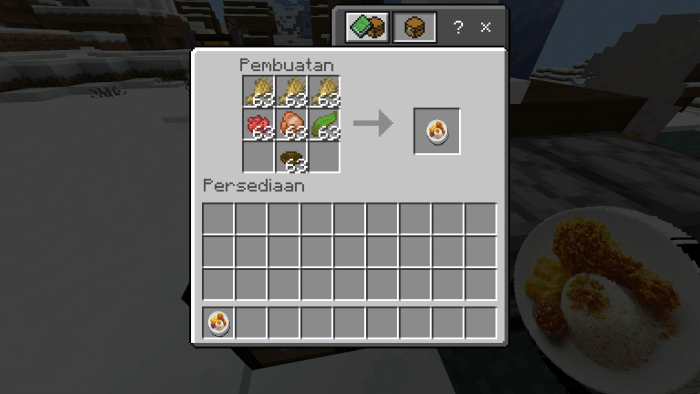 Egg crust is a food made from glutinous white rice, chicken or duck eggs, dry roasted dried shrimp plus fried shallots, then given spices that are mashed in the form of roasted coconut, red chilies, kencur, ginger, pepper, salt and granulated sugar. 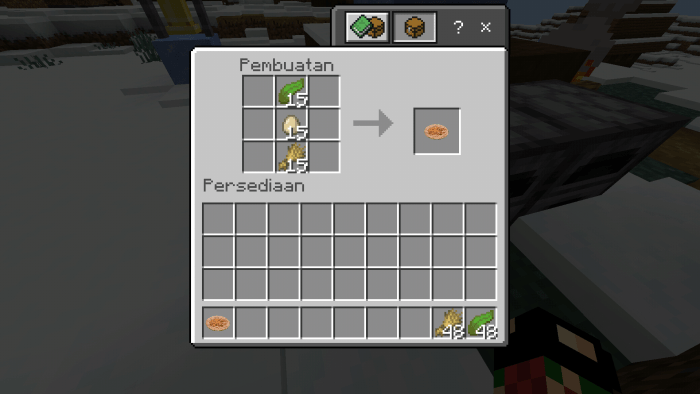 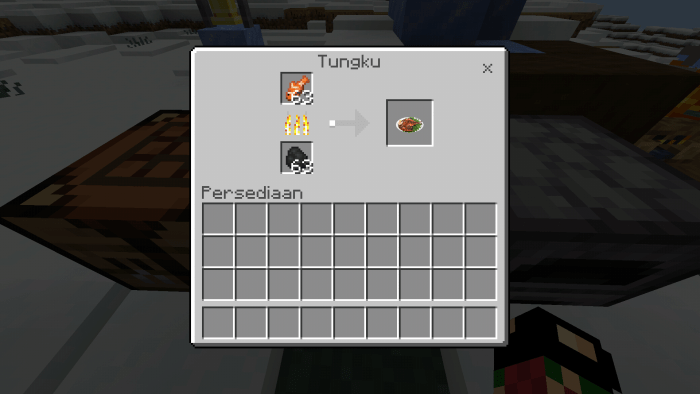 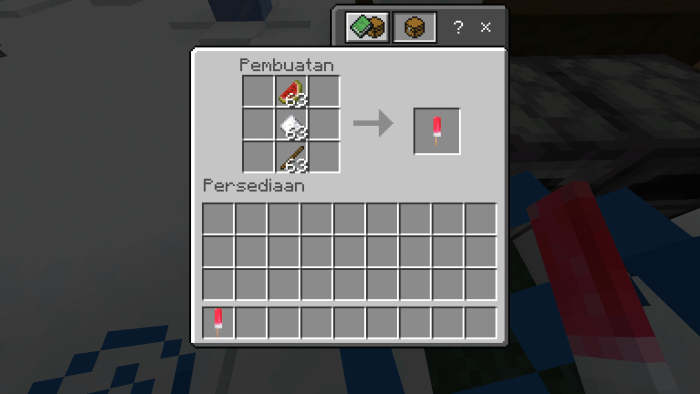 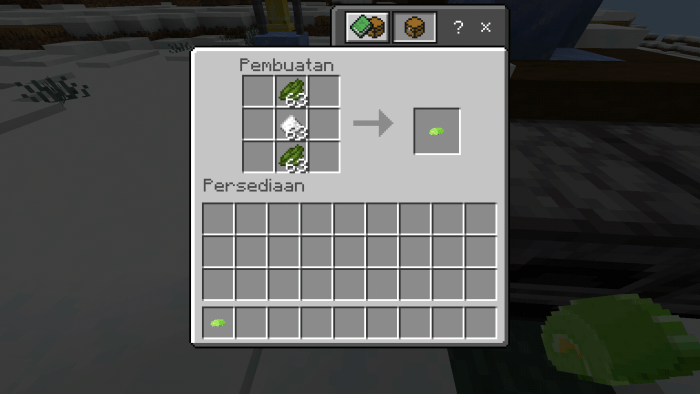 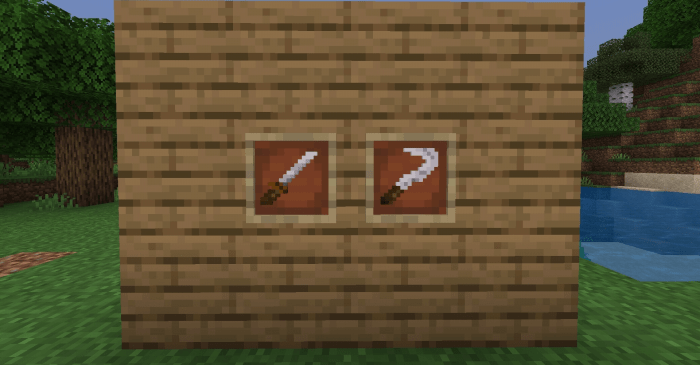 Keris has 25 damage and great durability. You can get it after killing kuntilanak

Sickle has little damage and durability. You can get it after killing Tuyul

sharp bamboo has 8 damage and replaces the trident 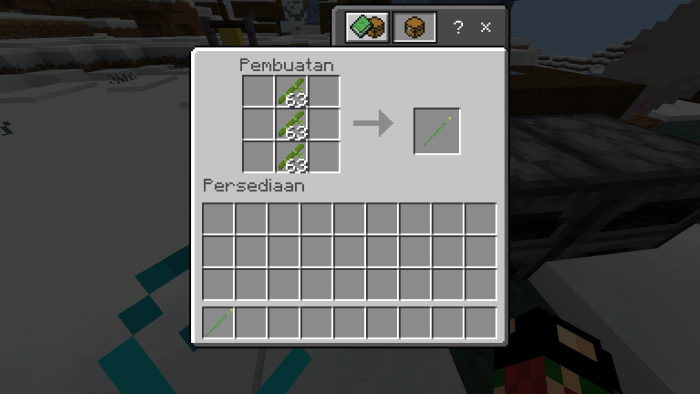 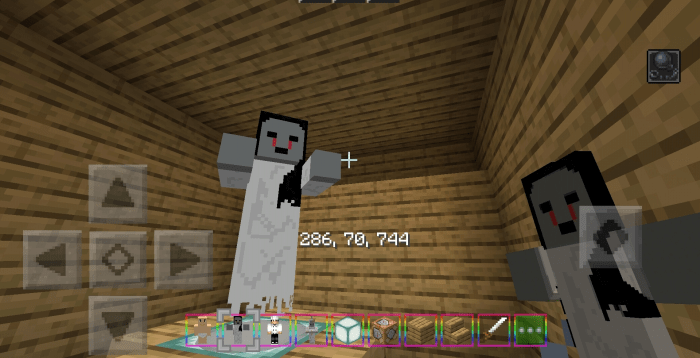 Kuntilanak can make you get a slowness effect, but if you kill it you can get a keris. Which is where the keris can only be obtained after you kill the kuntilanak. You can find it in the savanna biomes, plains, forest, and beach 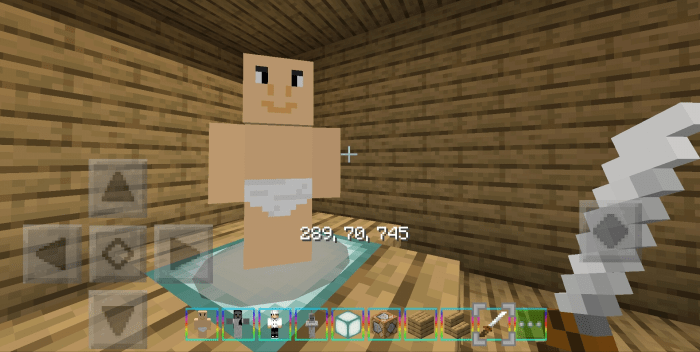 Tuyul has 6 damage! So be careful! And if you kill him, you will get a scythe. Which sickle can only be obtained after you kill Tuyul. You can find them in the birch_forest_hills_mutated, forest_hills, river, and the_end biomes. 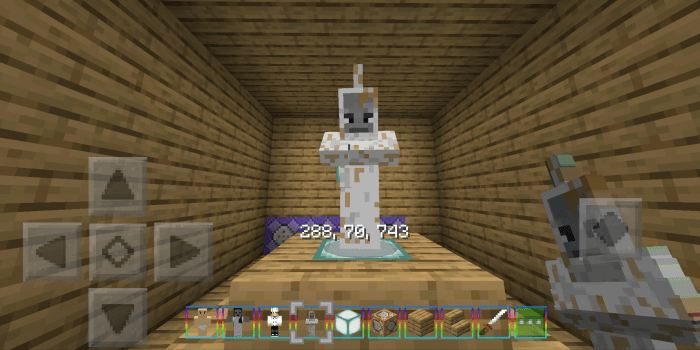 Be careful with pocong! Because it can have a negative effect, namely nausea. You can find them in the jungle, extreme_hills, and desert biomes. 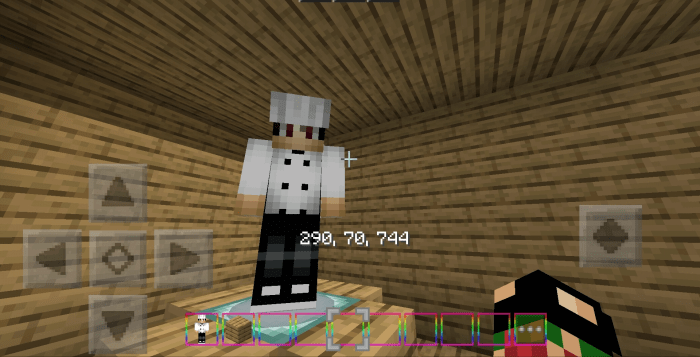 Chef Village is only to make it easier for you to buy the food in this addon. If you are short on items or don’t want to make crafts you can buy them from the Chef Village. You can find them in the plains, taiga, beach, birch_forest, savanna, and flower_forest biomes. 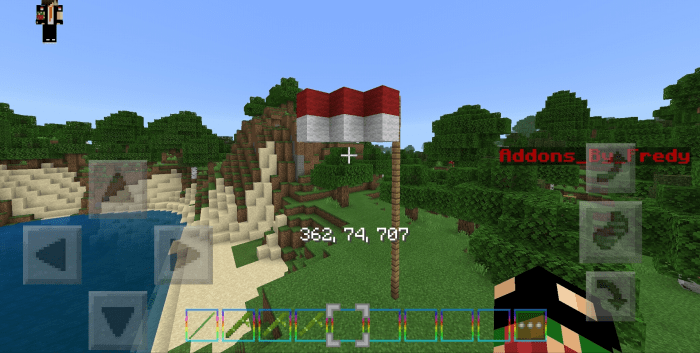 If you find anything that looks like it’s not working as it should, please leave a comment and I will look into it.

– And don’t forget to activate the experimental gameplay! Because if it is not activated, this addon will not work! Works but only partially.

You have to download one by one of these addons which are "Resource Pack" and "Behavior Pack" !. After that compress the file "Indonesian Addons - Resource Pack zip" then import it to 1.games 2.com.mojang 3.resource_pack and paste it.

For an easy way you download the two files earlier "Resource and Behavior" then change the file name from .zip to .mcpack after that press then you will immediately be directed to minecraft