Jurassic Craft is an incredible addon which includes 19 different dinosaurs in one pack. Each of them include a unique set of behaviors. For example, some of them you can tame and ride and others you have to be extra careful with since their aggressive behavior will make them want to kill and eat you. Also, make sure to try out the Jurassic Craft World map!

Raptors (or formally known as Velociraptors) are formidable dinosaurs which play a prominent role in the Jurassic Park universe.

To tame a raptor you will need any type of meat. It’s only possible to tame ones which are small. Once tamed you can feed them more meat to accelerate their growth process.

A tamed raptor will always follow its master and try to protect you against any harm, e.g. hostile monsters.

You can change the color of a tamed raptor by giving it a new name tag. Here’s a list of available raptor colors: Blue, Charlie, Echo, Delta, Red, Alpha, Tiger. 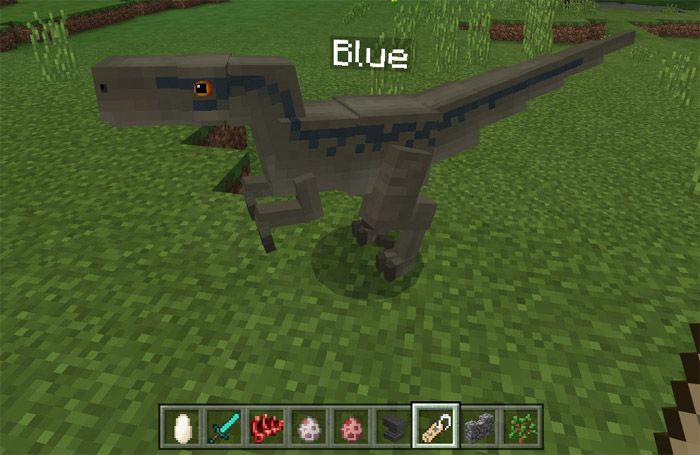 It takes 30 minutes for a baby raptor to grow into an adult. You can feed it any type of meat to accelerate this process.

The Carnotaurus is a large and vicious dinosaur which is hostile towards anything that moves, so that includes everything from mobs to players. However, if you find a baby Carnotaurus then you can befriend it with some meat and as a result it will then defend you against hostile threats and even let you ride it. 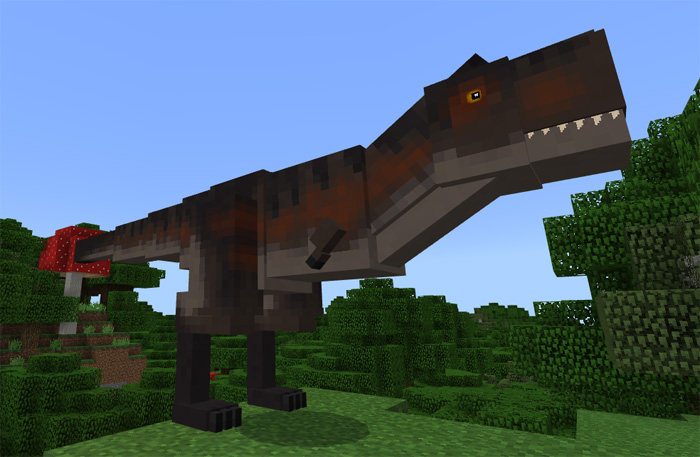 The Indoraptor is considered the perfect hybrid of two incredibly dangerous creatures. It was featured as the primary creature antagonist in the latest Jurassic World: Fallen Kingdom.

Feed Indoraptor’s Genes (Milk Bucket) to a normal raptor to transform it into a ferocious Indoraptor.

Tyrannosaurus Rex is believed to have been one of the largest carnivorous which lived during its time.

You can only tame babies. If you ever find yourself up against a big one then prepare to run or at least come well equipped to the fight.

It takes a long time for a baby to grow into an adult. If one isn’t tempted by your meat then it just means you can’t tame it and need to find another.

A tamed t-rex will follow you around and also protect you against most evils you come to face. You can also use it for riding.

You can also use it for storing your blocks and items. While sitting on it open the inventory to access the t-rex inventory (27 slots). 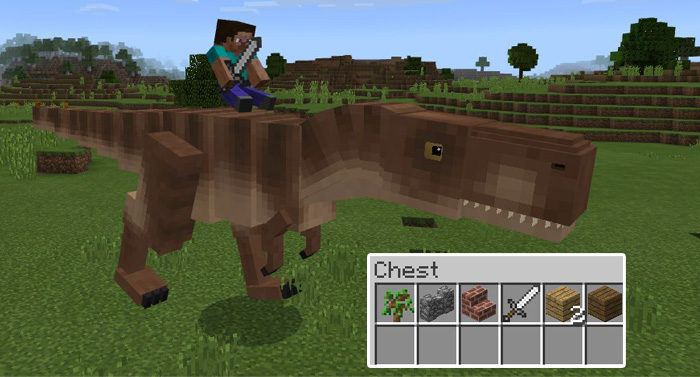 A wild t-rex is among the most dangerous mobs to come across. It loves the taste of human flesh and it eats any other mobs or animals.

Indominus Rex is a fictional dinosaur which played the role as the main antagonist in the latest Jurassic World movie.  Basic info: Extremely hostile, replaces iron golems, basically a boss.

To spawn it you will need to build an iron structure (just the same way as if you were to spawn an iron golem) and place a pumpkin on the top center of the structure.

As soon you’ve done that it will spawn so make sure to start running quickly!

This one is the most dangerous dinosaur of them all and will eat mostly anything it comes across. That includes larger dinosaurs too, such as the T-Rex.

This the smallest dinosaur included in this add-on. They are very dangerous if they get together as a group to chase their prey (e.g. the player).

Since they replace husks they can be found spawning in deserts. They are the smallest type of dinosaur (in this add-on) and while they do look cute don’t be fooled! They are very dangerous and especially so if they get together as a group to hunt!

But don’t worry, they are easily distracted. Take out any piece of meat and they will immediately lose their interest in your human flesh and instead stand still looking at the piece of meat.

The Ludodactylus is actually a flying reptile. Even though it looks as if it could eat you in just a few bites it is a non-hostile mob which will never do you any harm. It goes through 5 growth stages. 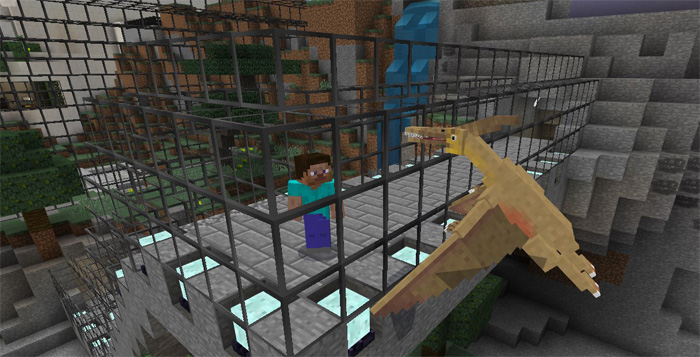 It hangs out in and around caves. You can capture one by tying a leash around its neck. And if you feel courageous then try to ride it! You can’t control it though.

Mosasaurus is the largest aquatic reptile living in the ocean in Minecraft. It loves the taste of human so make sure to stay out of the water if you hold your life dear.

Tylosaurus is another large aquatic reptile living in the ocean. It’s not as big as the Mosasaurus but it’s still very dangerous and can inflict some serious damage.

Both of the two aquatic sea creatures are hostile toward most mobs and players. They will not hesitate you or a pig!

You can attract the babies by holding a fish in your hand. If you feed them the fish you will accelerate their growth process.

This is probably the least dangerous dinosaur which you can come across in Minecraft. They are very easy to spot because of their long neck but this also makes them an easy prey for hostile dinosaurs such as Indominus Rex.

The largest Brachiosaurus is difficult to find as they can spawn as 10 different sizes. However, you can accelerate the growth process by feeding a baby Brachiosaurus some leaves. Leaves can be obtained from trees by using shears or a silk touch enchanted tool. 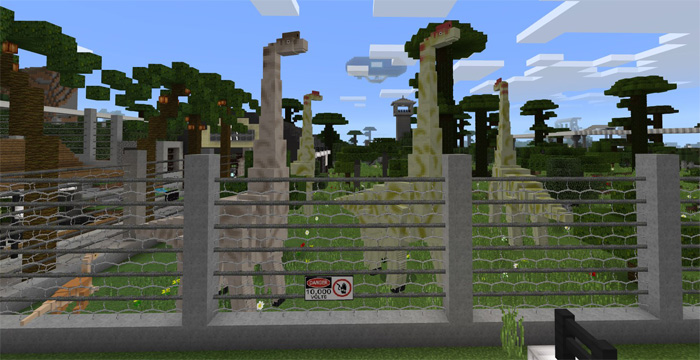 You can breed two adults (male = cow, female = mooshroom) by feeding them some leaves. 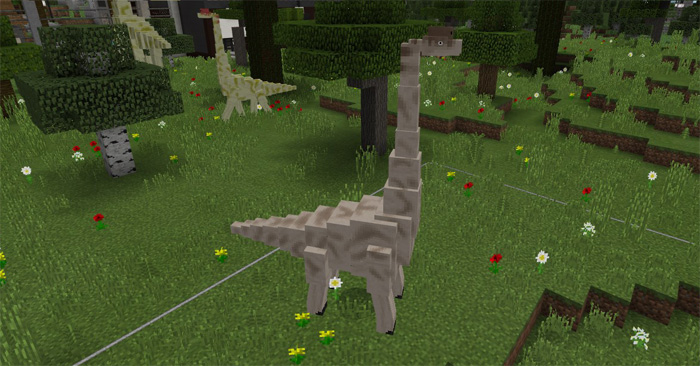 The Dilophosaurus in this add-on is based on the one as seen in Jurassic Park. However, the one which lived on Earth in real life is in no way similar to this one so keep that in mind. This one has the ability to spit poison.

It opens its crest when it is going to spit.

Don’t get too close! If you get close to them they will spit venom which blinds you. And if you get even closer they have a melee attack (5 attack damage)

The Oviraptor is a shy dinosaur which will try to avoid players at any cost. However, chickens they will gladly try to eat!

They show a natural dislike of chickens which they will kill. But they are very weak (1-3 attack damage)

This dinosaur was most likely larger than Tyrannosaurus Rex and you can bet that it’s hostile!

You can tame a Spinosaurus by feeding it some meat. A tamed one will automatically follow you around and protect you against hostile mobs.

A wild Spinosaurus is hostile towards players and other mobs.

You can access a storage container (27 slots) for the Spinosaurus and use it to store your blocks and items.

The dinosaur can also be used for riding.

The Gallimimus must be one of the least frightful dinosaurs included in this add-on. It is naturally afraid of players and will always try to run away. Basic info: tameable, rideable, replaces zombie pigmen.

Gallimimus is a very shy mob which will by default avoid players. You can attract it with some wheat, carrot, beetroot or potatoes.

Taming for this dinosaur works very similar to taming a horse. In order to tame it you need to keep trying to ride it until it accepts you as its master/rider.

You can increase the tame chance by feeding any of the following items before trying to ride it.

As soon as you’ve managed to tame one you can ride it and control it by holding an iron sword.

The small dinosaurs include four dinosaurs which main purpose is to act as prey for the larger dinosaurs such as T-Rex and Spinosaurus. They feel inferior to most living beings and that include players too which they will shy away from.

They can be found spawning mainly in jungles since they replace ocelots. But you can of course also use spawn eggs to spawn them. Most of them will try to avoid you but you can attract them with any of the following items.

Chilesaurus is largest of the four dinosaurs.

Leaellynasaura is smaller than the Chilesaurus and it shows no appetite for players or other beings, instead it will be afraid and try to run away.

Hypsilophodon runs is kind of difficult to get a good glimpse of since it will always try to run away and it’s quite fast!

Otniella is one of the smallest dinosaurs in this add-on and will always try to avoid players and dinosaurs.

The Dodo is a friendly and flightless bird. It’s slightly larger than a chicken (which it replaces) and it can be found spawning in most terrains.

The Ankylosaurus wears like a thick armor plate which is mostly constructed by bones. This increases both its strength and sturdiness. It’s a non-hostile dinosaur which will only attack if it’s being attacked first or if it sees any other Ankylosaurus being attacked. 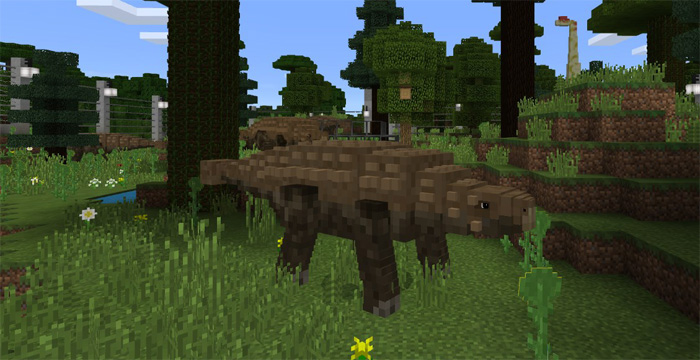 It takes 40 minutes (two full Minecraft days) for a baby to grow into an adult. Accelerate growth with carrots, beetroots, potatoes, leaves, wheat or hay blocks. You can also heal one with the same items.

The Triceratops is a stout, four-legged dinosaur. On its head it bears a bony frill and three white horns. It’s a neutral mob which will try to avoid larger dinosaurs but if provoked it will protect itself and its cubs against both ill-intended players and hostile dinosaurs.

A goat is like a garbage can on legs. If it sees an item on the ground then you can be sure that they will come running and try to eat it. That’s why goats can’t be trusted. If you die, you surely don’t want to be anywhere close to a goat because then it will swiftly eat your items while you’re gone.

The goats are similar to sheep in that sense that they appear in different colors. Gray, light gray, black, white and brown are the most common ones but on rare occasions (5% spawn rate) a red one might spawn.

Feed them to the dinosaurs!

The Baculites, also known as a “walking stick rock”, is a sea creature with a long and pointy shell. It’s not that different compared to a squid in terms of its behaviors. 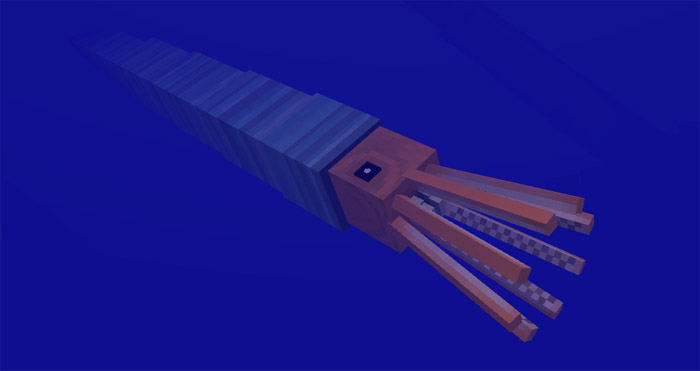 The Jeep Wrangler and Mercedes-Benz G550 are the best type of vehicles to use when going through rough terrains. 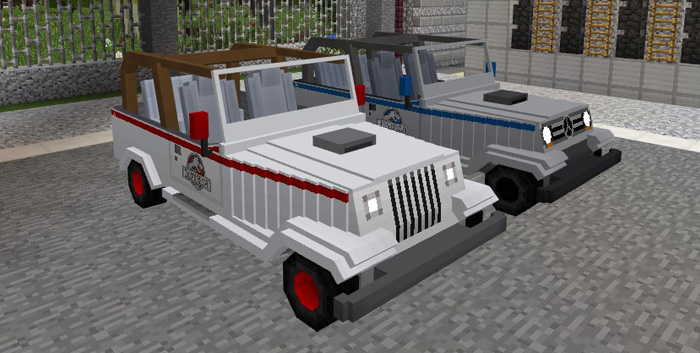 You can use a key (also known as a carrot on a stick) to control the direction of the vehicle.

These blocks are basically decorative blocks which can be used for decorating your worlds.

Problems getting it to work? Try setting the resource pack as a global resource pack: Settings > Global Resources and only load the behavior pack in-game.