Admin tools is designed to stop you from typing long commands such as /setblock ~ ~ ~ stone when your building in the air. Instead of typing /setblock ~ ~ ~ stone just type /function stone. Admin tools is also designed to stop you from need to spam commands or spawn eggs as seen in the newest update 0.1.3. Instead of spawning 20 cows manually you can just type /function ms_cow_20. Ms stands for multiple spawn, cow is what you want to spawn, you can replace this with pig, sheep or chicken (more coming soon). 20 is how many you want spawn, it only goes up in tens to make support for every mob easier (Coming soon) 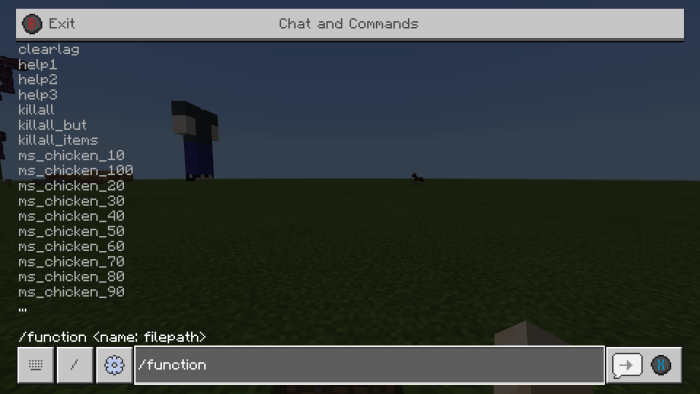 -Kill Mob: This command will kill a certain mob, it will look like this /function km_

-God mode: Inspired by the server command /godmode this command will make the people unbeatable and immortal. I just know this command is going to be abused.

–Anti-grief: This command clears tnt and lava buckets from players inventory. This command needs a command block to work.

-And more: I could list all day things i could add to make life easier.

Not a pack update but the fact that the (Number) and (Mob) was missing in the command section made me want to update it.

-MS LAG: want to annoy your friends by crashing their game and yours at the same time? Well your in luck with MS LAG you can make sure that your world will not be playable anymore! (Should i remove this) BTW: it spawns 1000 pigs.

-Up: The up command teleports you up that a mount blocks so if you want to be teleported 10 blocks up you type /function up10