The Lucky Block Infernal mod adds a block which when destroyed can cause one out of 35 different things to happen. Most of them are dangerous but nobody would willingly put themselves in danger unless there was an incentive. In this case the incentive is that on rare occassions loads of valuable items will appear. But you will probably have to deal with a lot of danger before that happens, unless you are lucky of course.

The Lucky Block Infernal can be obtained either by using the creative inventory, Toolbox or going in survival to craft it.

Place it down on the ground and then break it. In total there are 35 different things which can happen. There is no way to tell which of these 35 things which will happen when you break it because it’s all random.

We do recommend to come prepared with some diamond gear and a good weapon because a great possibility is that something dangerous will occure.

For example, one time when we destroyed the block a swarm of attacking villagers riding bats appeared out of nowhere.

In some cases you might be more lucky. Sometimes less harmful things will happen such as riding an ocelot or finding loads of valuable gear, ingots and even diamonds.

Here are some fun mobs which will spawn. Basically it’s like ten mobs spawning on top of each other. 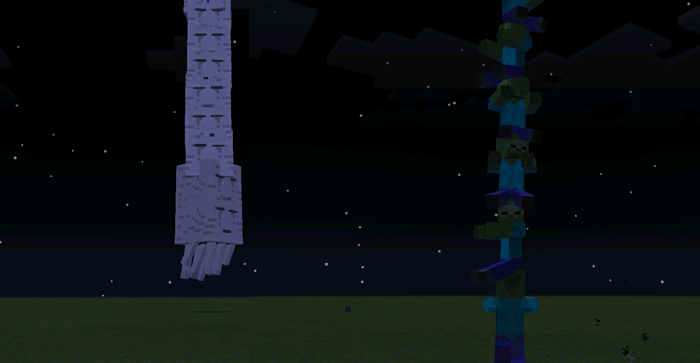