This addon gives the creeper an entire new (badass) look and also a couple of new abilities. Some of the features include the ability to shoot fire charges, punch players and also cause a much larger explosion. The first time I saw it in action it was hard to hold back my laughter!

The Mega Creeper is a beefed up version of the normal creeper. It’s as if the creepers have come up with a technology to make themselves cyborgs (half creeper, half robot).

They wear a red body armor and on their shoulders they carry a TNT block.

Their main attack is the rocket launcher. This allows them to shoot fire charges at players who try to get in their proximity. 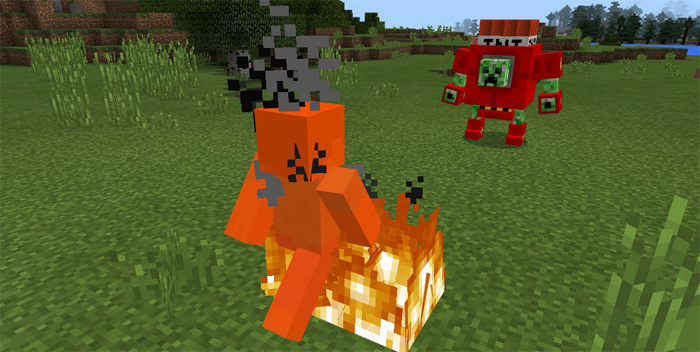 The last (and also most powerful) solution for eliminating their target is the explosion. If a player is within a few blocks radius they will start hitting the player (6 attack damage), blinking and then explode. It’s similar to that of a normal creeper except that it’s a much bigger explosion and it also causes some fire.