Mesozoic Biology is one of many other dino addons, but, this one is special, because Mesozoic Biology aims for Scientific accuracy! Many effort has been putted into it to make the most accurate models ever, with assesory by experts on the field, we hope you like it!

Mesozoic Biology as said before, is an addon that aims for Scientific accuracy, and, archieves it, so, if you want to see how dinosaurs really were, this is your addon! So, let’s get into it!

In this beta, we have 7 dinosaurs, Tyrannosaurus rex, Triceratops horridus, Spinosaurus aegyptiacus, Edmontosaurus annectens, Diplodocus hallorum, Ornithomimus velox, Concavenator corcovatus and a prehistoric fish, Mawsonia gigas, all of them are tameable, sittable, rideable, and saddleable (saddle is optional)

First of all, we have the fossils, they are the remains of the colossal creatures that lived on the past, they spawn in every biome and there’s one for each dino 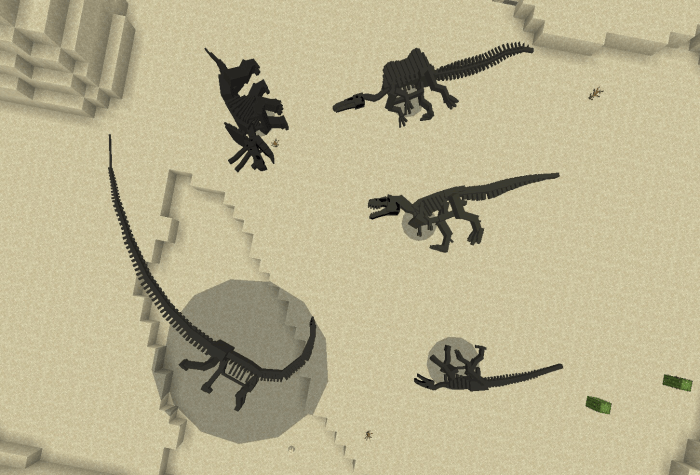 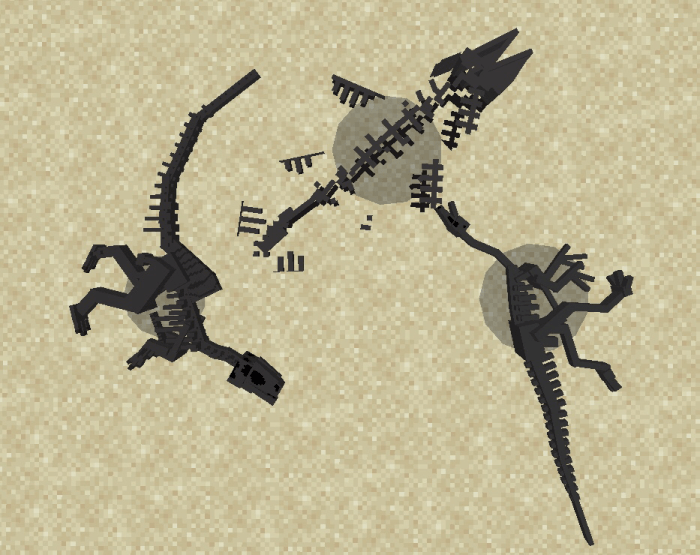 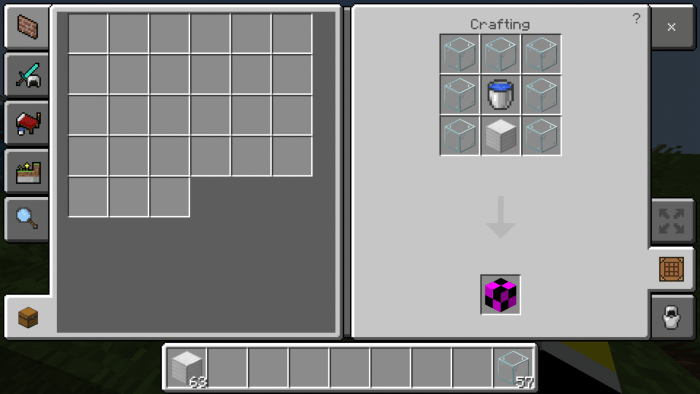 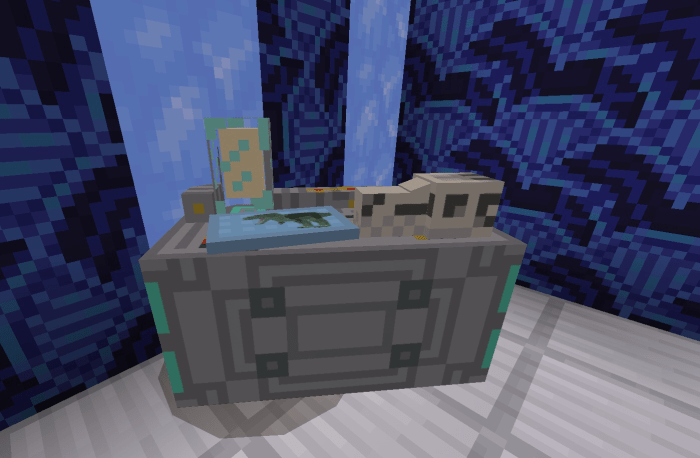 Then, we have the eggs, for now all of them are the same, but in the future they will have special models and textures for each of them! 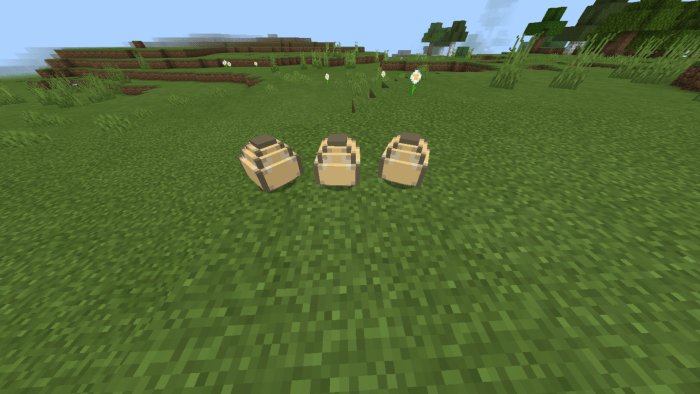 Now let’s go to the real focus of this addon, the dinosaurs!

Tyrannosaurus roamed north america in the late cretaceous, this guy has a big change during pubertry, tame one and watch him grow!

Sexual dimorfism: males are yellow with brown feathers and some other colors, while females are dark gray with a lighter gray on their feathers

Ageable with: most raw meat

Healable with: raw and cooked beef 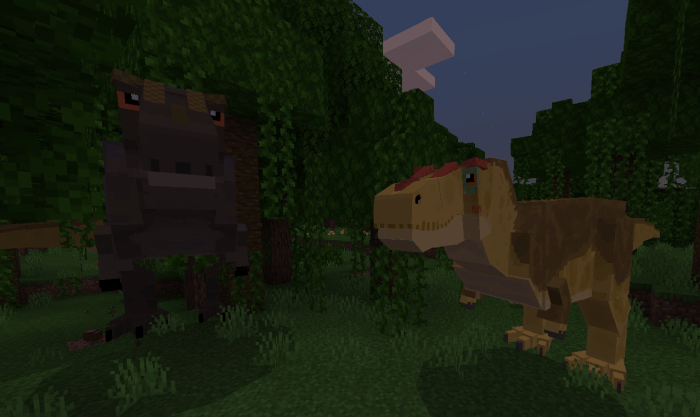 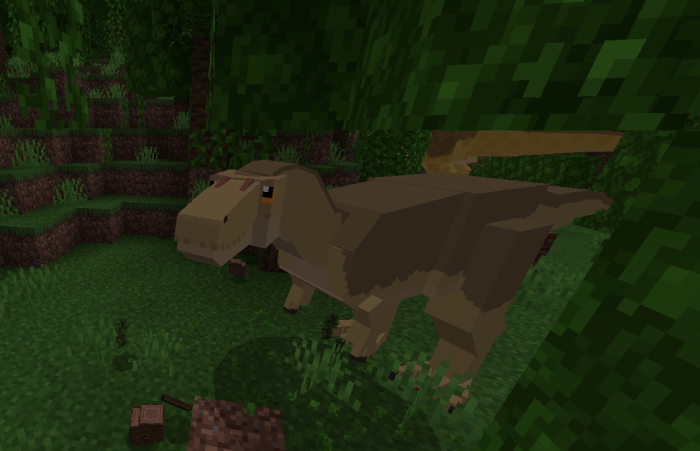 Triceratops lived alongside Tyrannosaurus in north america late cretaceous, this guy also has extreme changes during pubertry, is passive towards all neutral and passive mobs, except for chickens, rabbits, and bees 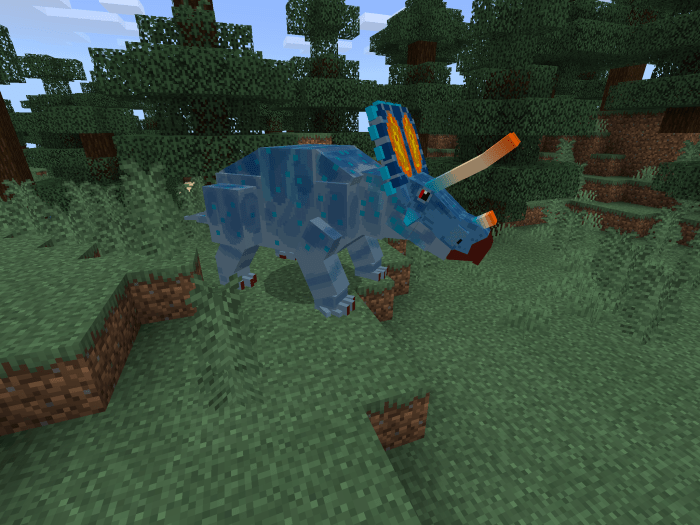 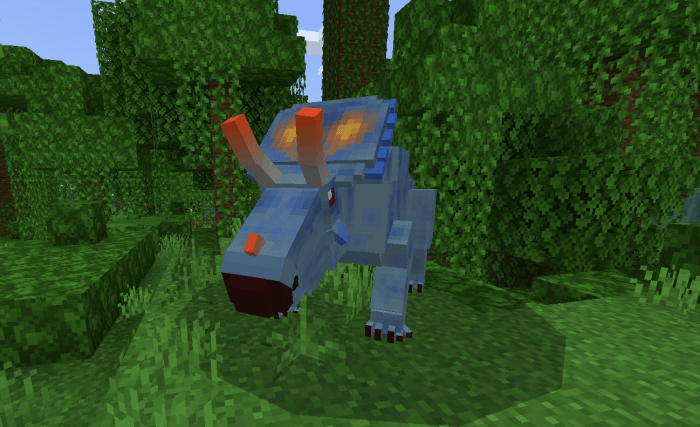 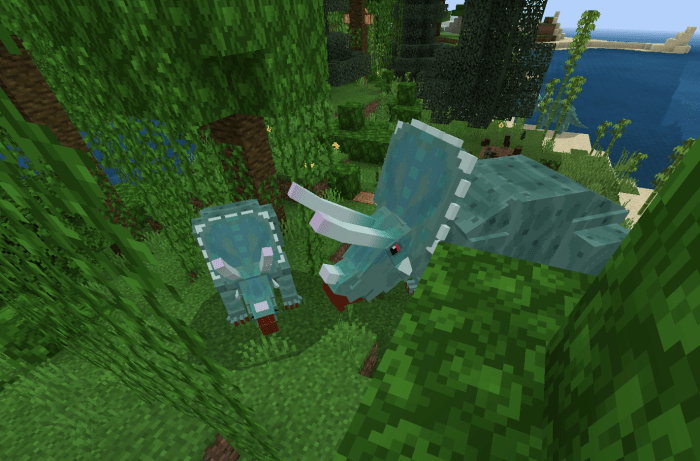 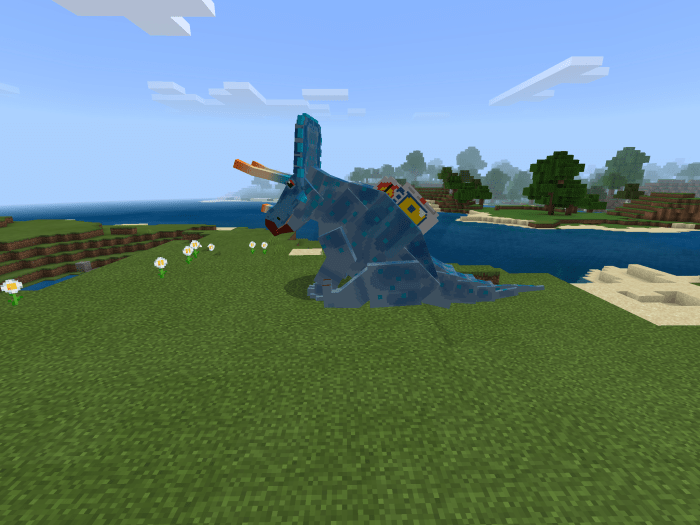 Spinosaurus roamed africa on the starts of the cretaceous, this one is the weakest of them all, but, it has a special ability, it swims super fast and with his own swim animation!

Sexual dimorfism: Males are blue with orange sail and red tail, while females are entirely brown

Ageable with: some raw meat and salmon

Healable with: raw and cooked salmon 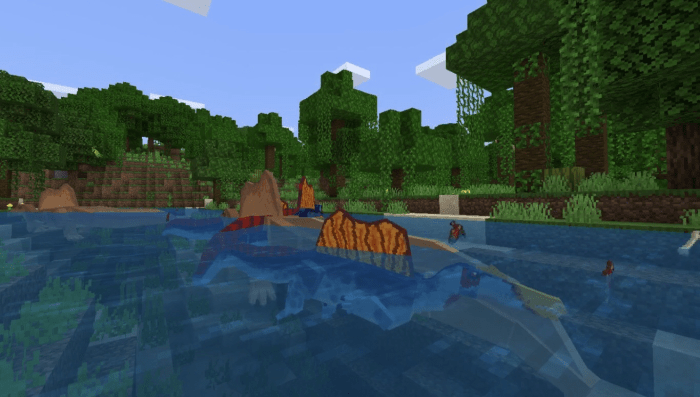 Edmontosaurus was the favorite prey of Tyrannosaurus, this guy is basically the most normal dinosaur of the addon, and it doesn’t even has a saddle :|, it attacks rabbits, chickens and bees

Sexual dimorfism: Both of them are green because they needed to avoid predators, but, the males have some red stripes here and there 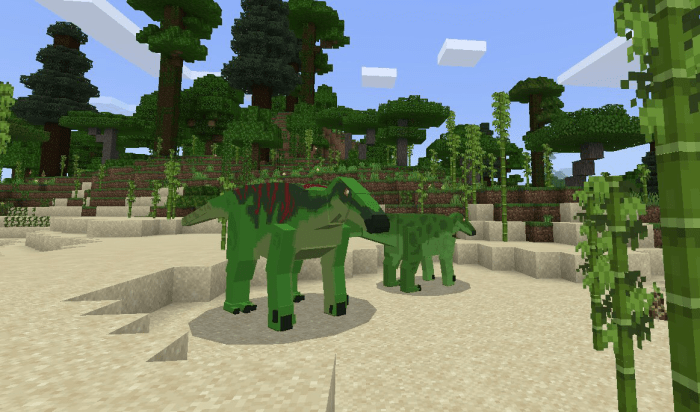 Diplodocus is the biggest and strongest dinosaur of this addon, this colossal creature is passive towards everything, except chickens, rabbits and bees, this guy can carry 11 players on his back!

Sexual dimorfism: Males are yellow with brown stripes, while females are entirely brown 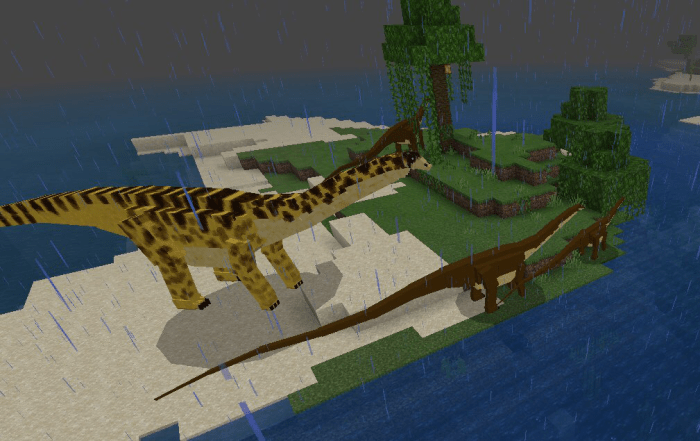 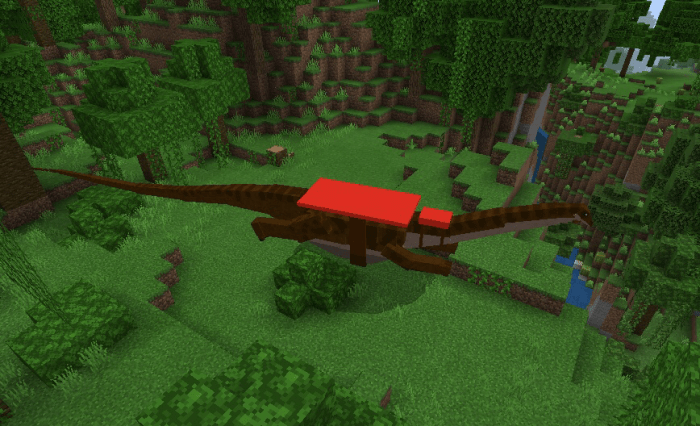 Ornithomimus is a small Ornithomimid from north america, this guy lived alongside Tyrannosaurus, Triceratops, and Edmontosaurus, this guy is passive unless you attack it 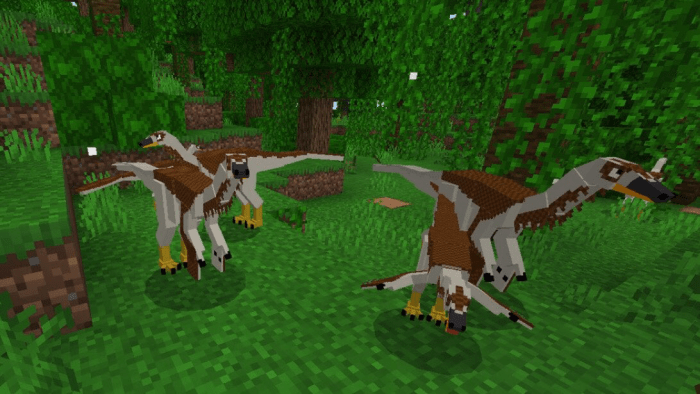 Concavenator is a small carcharodontosaurid from spain, this guy hunted Pelecanimimus (not added yet) so, when seeing a Ornithomimus, it will think that it’s a giant Pelecanimimus, and it will attack it

Sexual dimorfism: Males are yellow with a red back, and orange stripes, while females are gray with some darker gray stripes

Ageable with: all kinds of raw meat

Healable with: beef and cooked beef 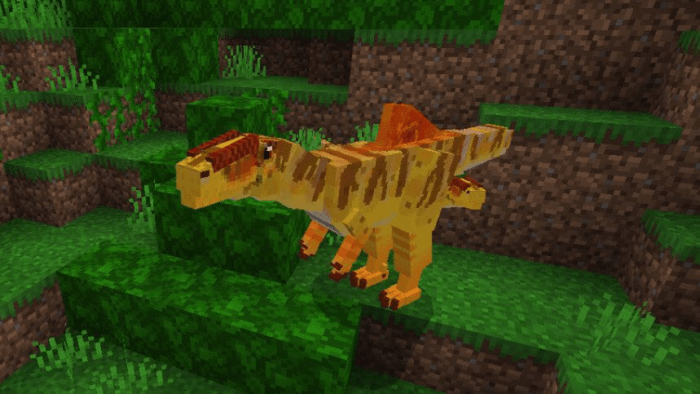 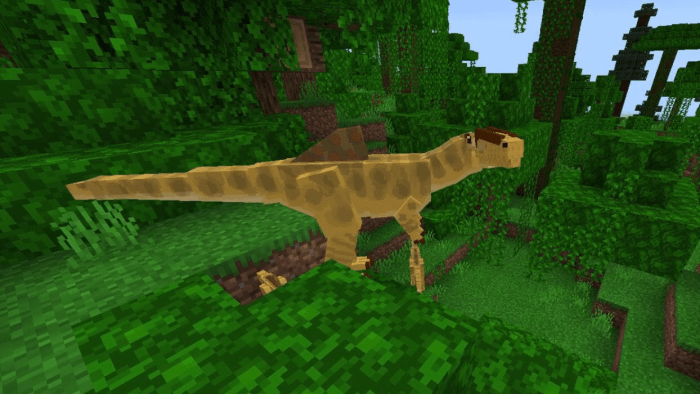 Mawsonia is a prehistoric fish that lived alongside Spinosaurus, this guy is big and friendly, you can ride them and controll them with a Fish on a stick, this fish on a stick is crafteable with a fishing rod and a raw cod at his right 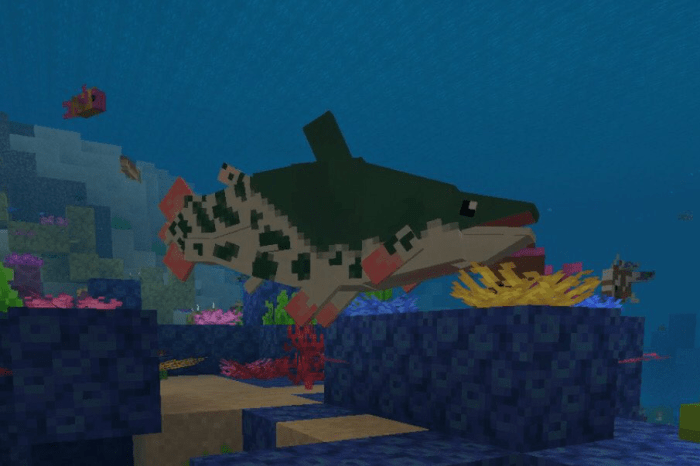 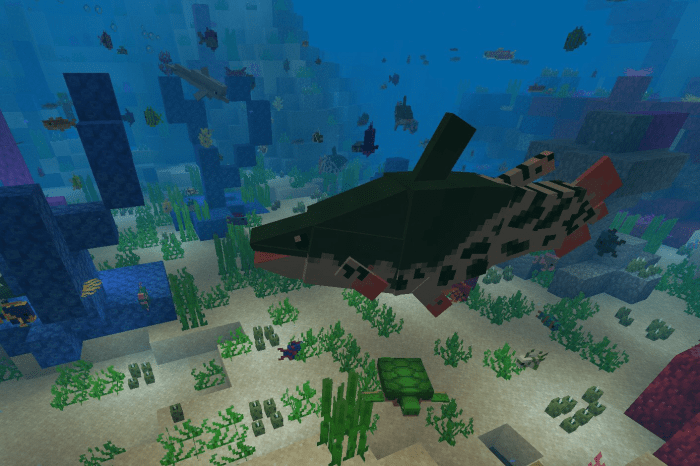 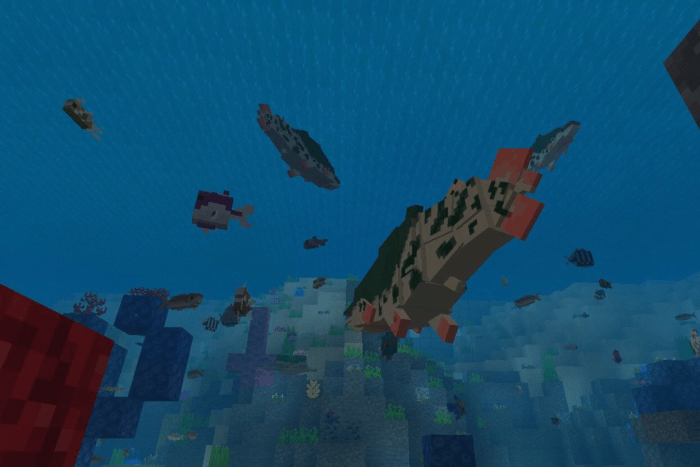 Concavenators when dying will drop their hump, you can cook this hump to eat it and get possitive effects like regen! 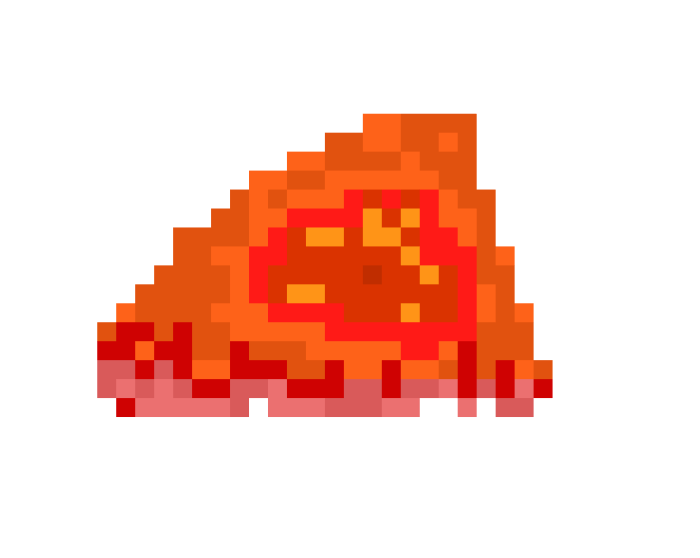 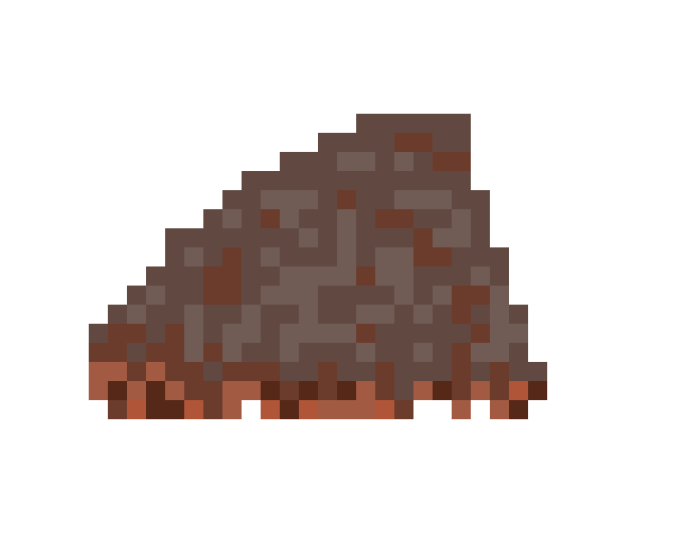 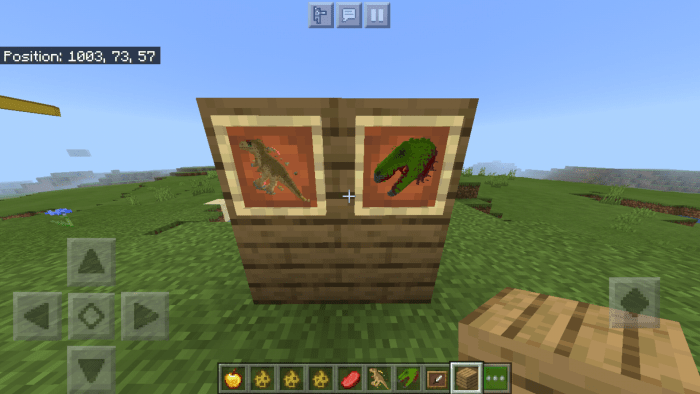 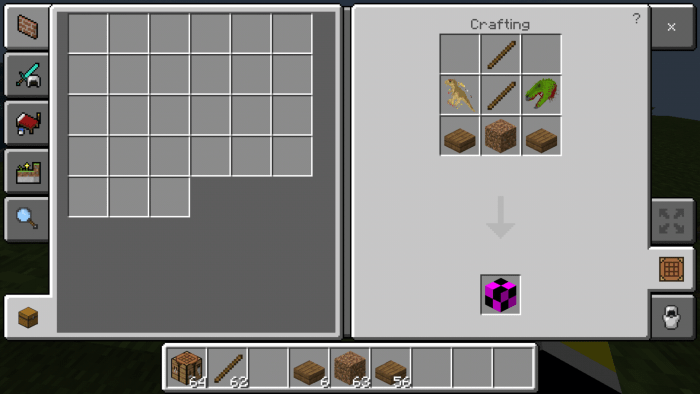 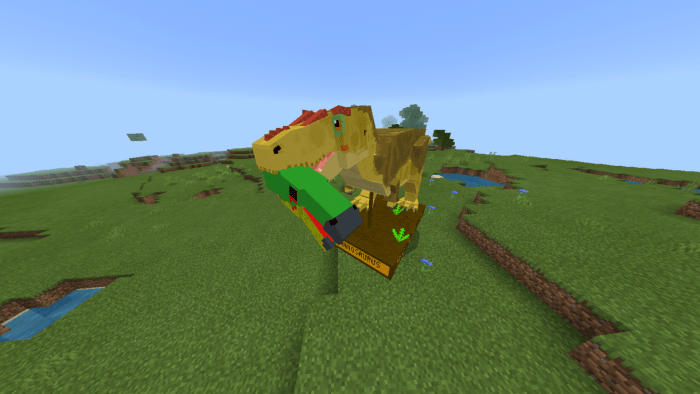 Video guide will eventually come, I’ll post the link to it on the comments

-Added Fish on a stick

-Added ontogeny to Tyrannosaurus and Triceratops