Brave Adventurer, I  must warn you before you venture into a cavern. Hidden in the dark, disguised as a container of riches, it sits silently and unmoving. It waits for you to get closer until it is too late. It’s jagged teeth sinks into your leg and disables you from escaping its hunger. The Mimic.

Hello there! Have you ever played one of those RPG Dungeon games and come across a chest that you think has loot in it but once you come close it opens its mouth and attacks? Yeah. That’s a mimic. 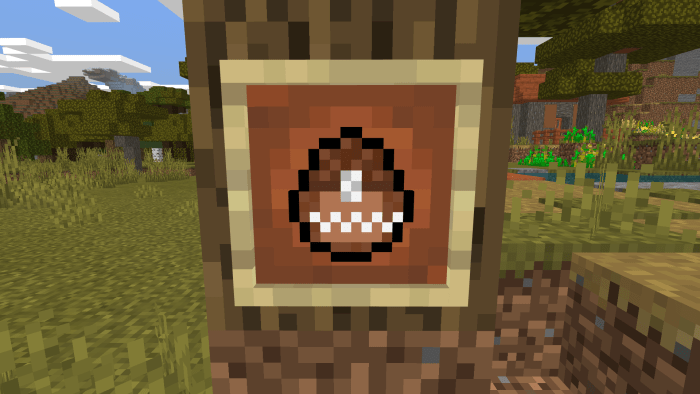 To spawn a Mimic simply look in the creative inventory or summon it using the command: /summon rpg:mimic

In survival they will naturally spawn in your world inside of dark caves. 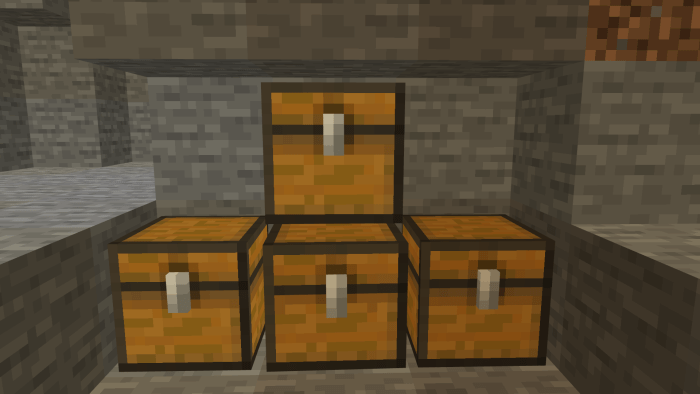 A mimic LOOKS like a regular chest but of course it isn’t. Incase you didn’t know. The Mimic is the one at the very centre of those chests and doesn’t merge with the others to create a large chest like a normal one would. 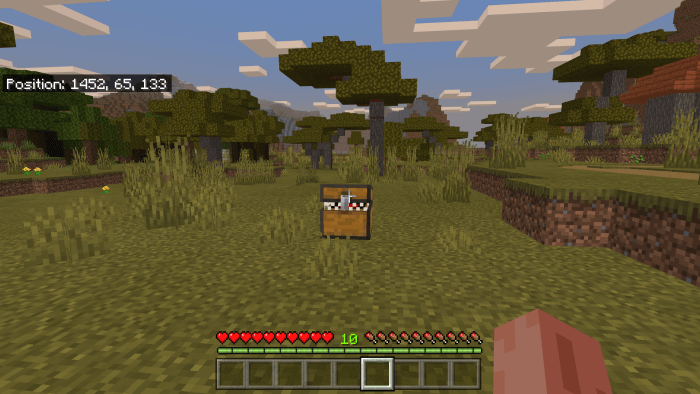 Once you get close enough. It will attack you and follow you. It’s bite causes slowness and deals 4 hearts! So be careful.

It has 30 health (15 hearts) and when killed, it might drop Emeralds, Iron Ingot, Gold and a few random items like Cobblestone and Gunpowder. 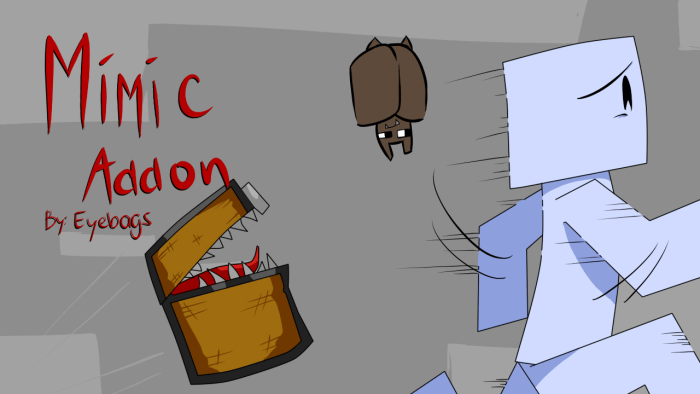 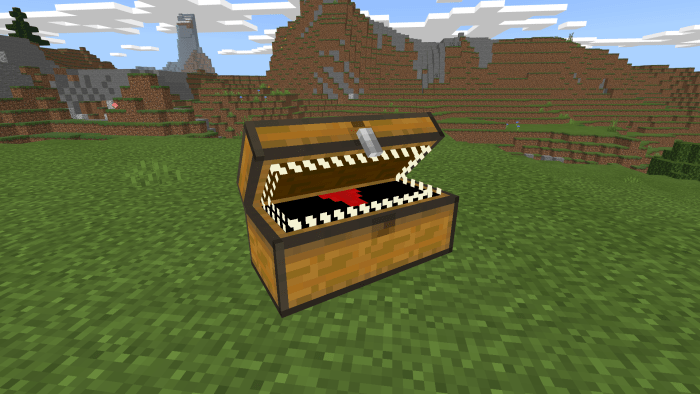 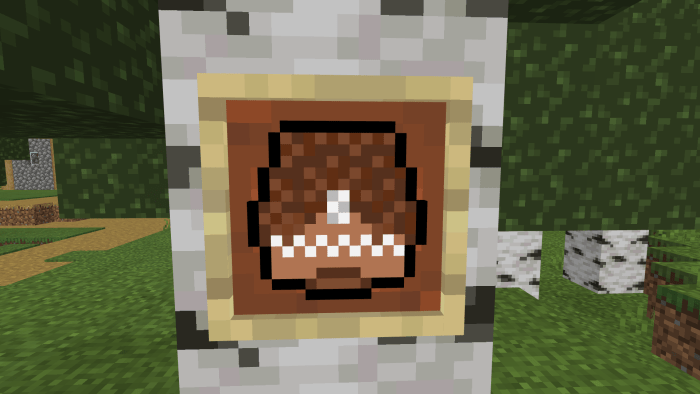 To spawn a Large Mimic simply look in the creative inventory or summon it using the command: /summon rpg:mimic _large

In survival they will naturally spawn in your world inside of dark caves. 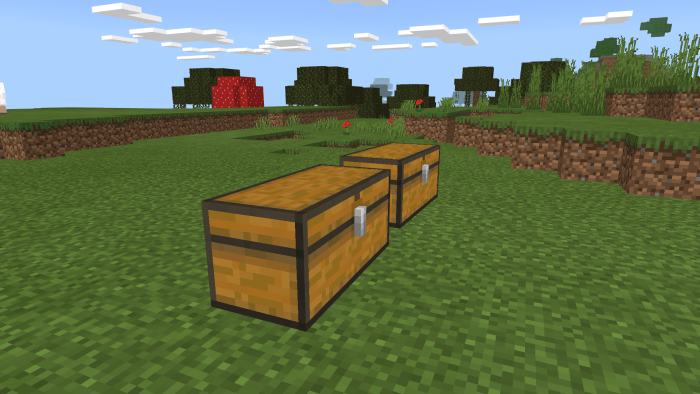 As usual. It looks EXACTLY like a large chest but again. IT BITES. 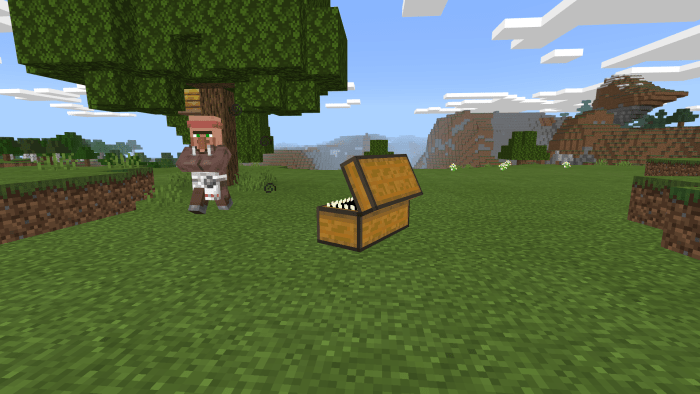 When bitten, it causes blindness and deals 6 hearts. of damage! It has 46 heatlh(23 hearts) so it is VERY BEEFY. The reward for killing is almost the same as the smaller mimic BUT it has Diamonds!! 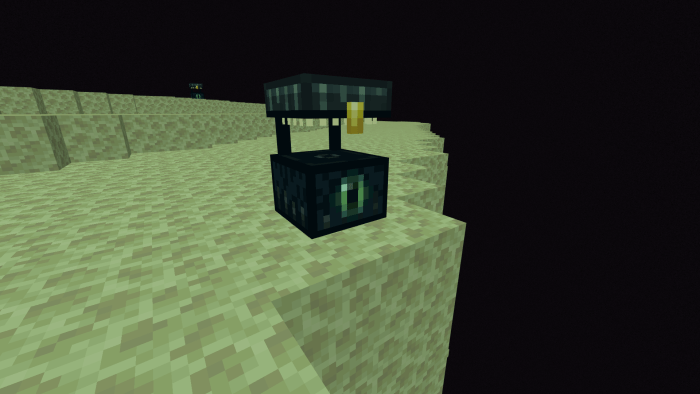 Resembles the Enderman when it attacks. Since you know. Ender Mimic. 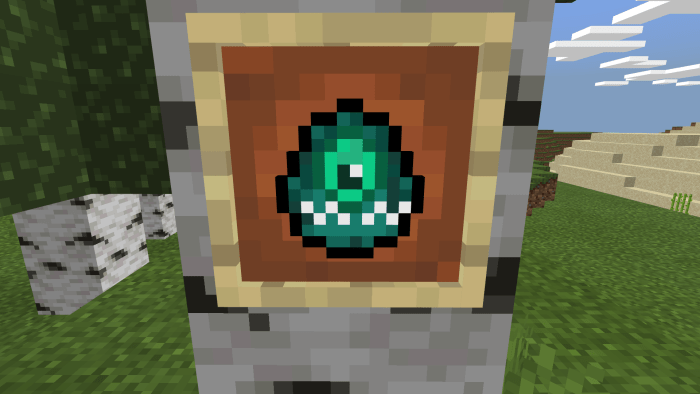 To spawn a Ender Mimic simply look in the creative inventory or summon it using the command: /summon rpg:mimic_ender

In survival they will naturally spawn in your world in The End. 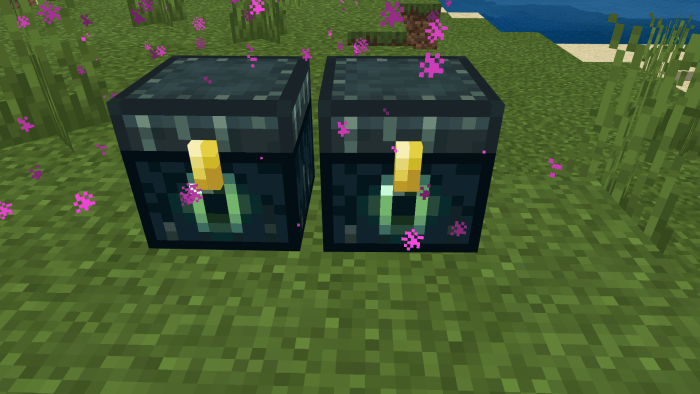 As per usual it LOOKS like a regular Ender Chest. It behaves like a regular Mimic and loves to bite villagers. Health is the same as the normal Mimic. This one drops Obsidian, Shulker Shells and of course Ender Pearls.

Also one commenter asked me to make ender mimic spawn in end cities. No idea how to do that yet but will try to figure it out soon.  Also also a user named Red Fan suggested I make it immune to explosions so….IT IS.

Almost forgot to mention. IT TELEPORTS. 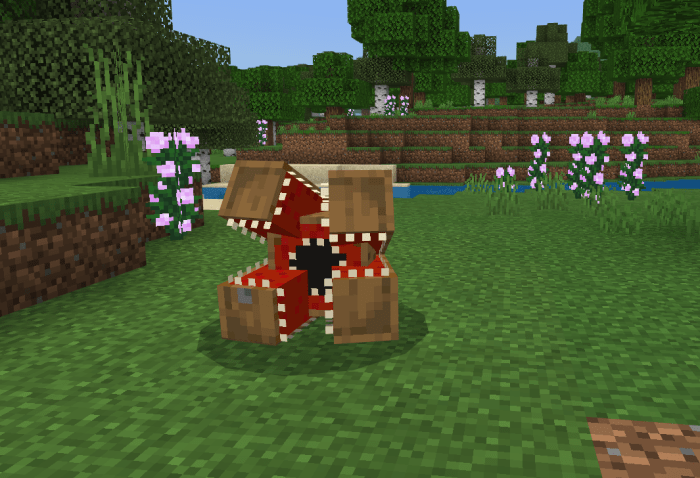 A mimic that slithers on land but swims in the water! 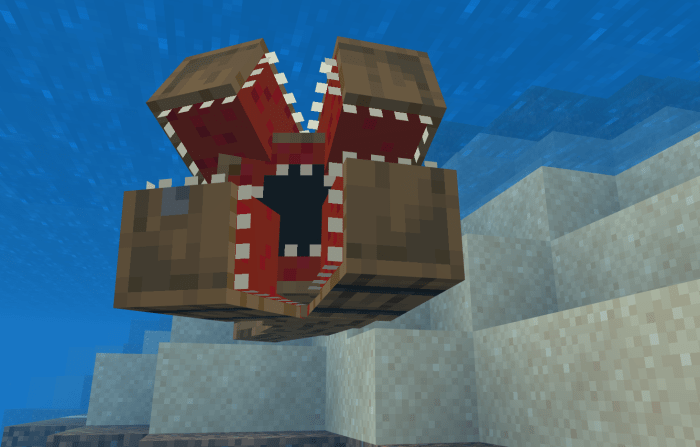 Do NOT go into water. It moves faster in water and when it bites you it causes poison! 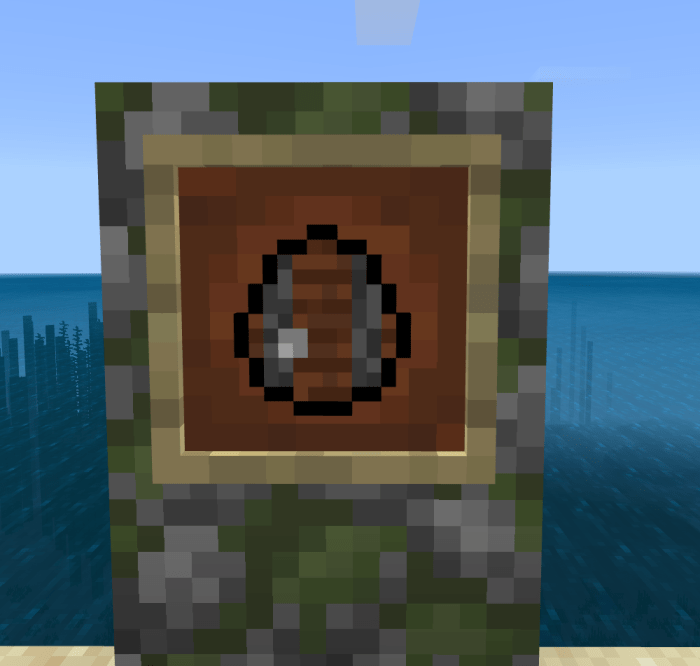 To spawn a Barrel Mimic simply look in the creative inventory or summon it using the command: /summon rpg:mimic_barrel 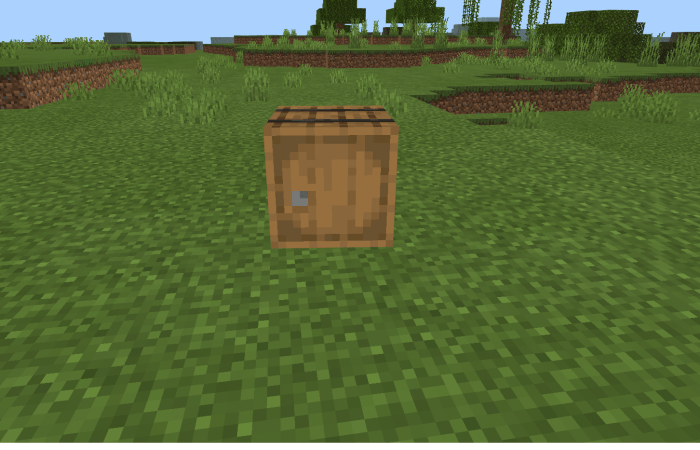 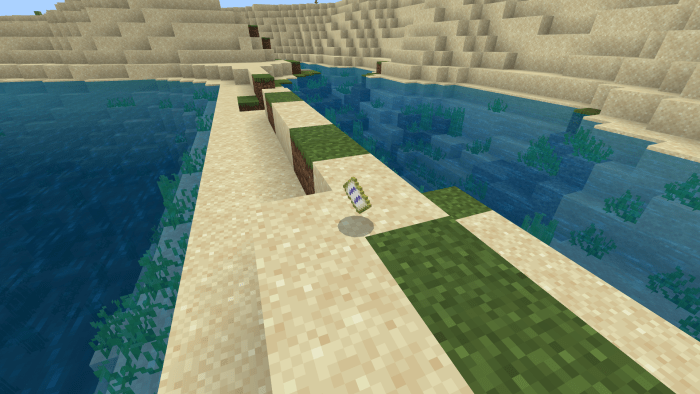 It spawns in beaches and when killed it drops sand, sea grass and on rare occasions maybe even an emerald or a TREASURE MAP!. Has the same health as the regular mimic and same attack damage

This was the first update that was completely from the commenters. Suggested by: Navneeth2007, Stick Boy. Thank you guys! 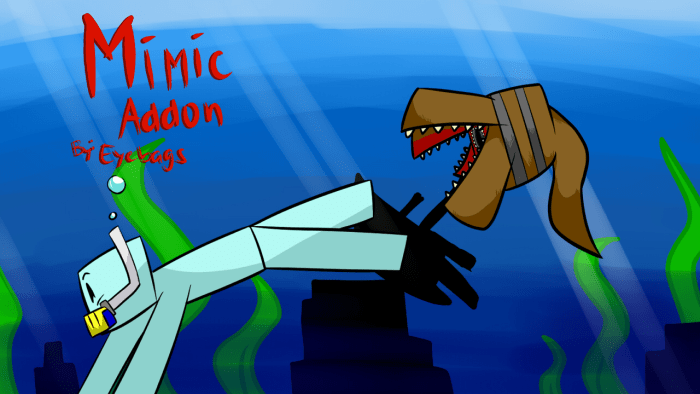 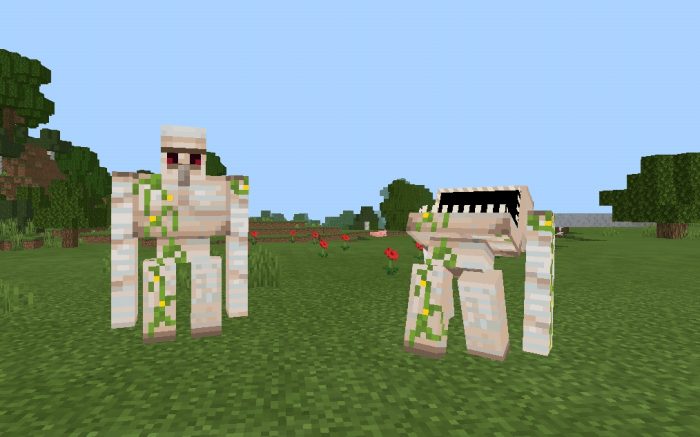 This  mimic type is the most dangerous so far! It has the power to take away HALF your hearts! Also this Mimic cannot be detected by the Iron Golem making it invisible to the only entity that you can run to for protection. It doesn’t attack villagers so it can easily blend into a village. It’s only food? YOU 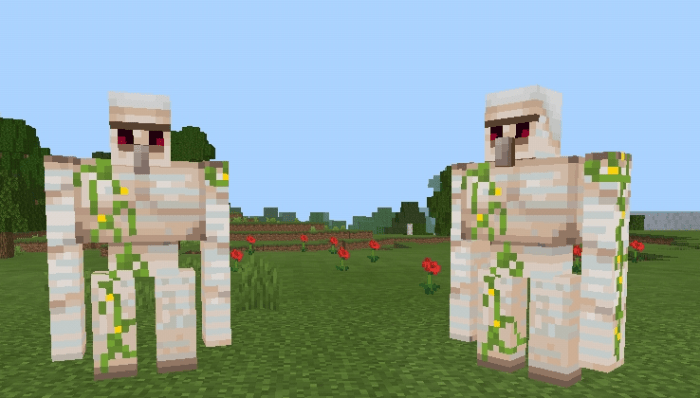 As you can see. There’s almost zero difference between the two. 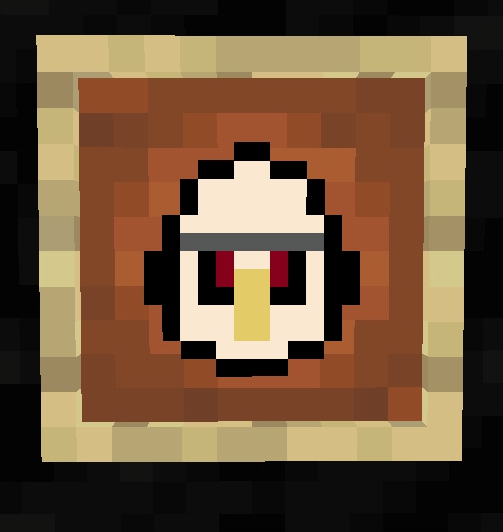 To spawn a Golem Mimic simply look in the creative inventory or summon it using the command: /summon rpg:mimic_golem 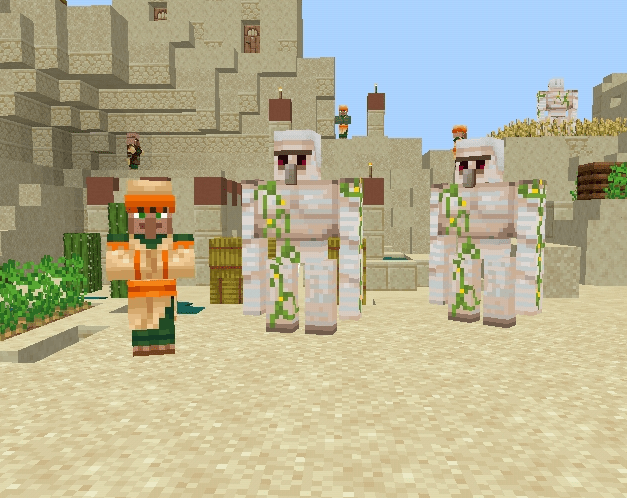 Undetectable. Powerful. Will swallow you whole. When killed it has the potential to drop Iron, Bones, some Diamonds and maybe a few Emeralds.

This is another update that was completely from the commenters. Suggested by: M.M.16 player. Thank you! 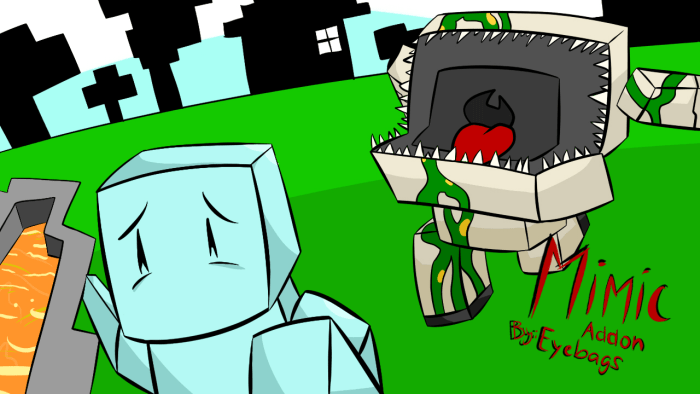 Future Plans For An Update:

(Suggested on Discord by: Cold72)

If you have any requests, questions or just want to chat  since I might not always check the comment section just talk to me through the following social media links.

I also made a YouTube channel for showcases, project updates, project trailers and some art related content.

HUGE thanks to the commenters for their ideas. If YOU want to suggest an idea just leave it in the comment section or contact me through my media links!

-So stay tuned for that. To see updates on that project follow me on Twitter link is up above and if you don’t then it’s fine. You’re gonna miss out tho.

1. Do not republish this addon as your own or modify it’s contents without my consent.

2. If you want to use this addon in other works including but not limited to videos and maps. Please give credit to the creator (me)

3. As said in rule 2 when giving credit. Please link to this MCPEDL page and not the direct mediafire link. Thanks.

-Lowered the damage of the Large mimic from 6 hearts to 4.5

-Lowered attack reach from 2 blocks to 0.5

-Reduced Blindness effect from 4 seconds to 3

-All Mimics (except the Golem) now attack cows, sheep, chickens and pigs.

-Decreased the spawn rate of Large, Ender and Regular Mimic

-ALL Mimics now have increased loot drops. Diamonds are now obtainable through

killing a mimic. The drop rate is higher the more difficult a Mimic type is to be killed.

-Made Ender Mimics immune to explosions (Thanks to Red Fan's comment!)

-Made Large Mimic unable to eat stone cuz he eats too much.

-Edited the other info on the Mimics

-Added the Furnace Mimic onto the planned update list

-Made Ender Mimics resistant to knockback

-Slowed Down the movement speed of Barrel Mimics on land

-Made Ender Mimics immune to explosions (Thanks to Red Fan's comment!)

-Made Large Mimic unable to eat stone cuz he eats too much.

-Added more color for some reason

-Added art because I just wanted to.

Modified the links again since I remember only adding 2 links but it shows 4 to 5.

Now  Added  the  Ender Mimic  to  the  addon will update it  again soon.

Removed Admin Verification Links From The Bottom Of The Page

Modified the behaviours of the Mimic so they attack villagers

Modified the Mimic model to better resemble a regular chest.

Changed the third sentence from "spawn Skeleton Creeper to Mimic"

Updated the first link and removed the requirement of activation of push notifications.

For Linkvertise simply wait 10 seconds and tap the black download button. Tap the view articles button and just wait for another 10 seconds before closing the window, after that. You're all set!

1. Unzip the zipped file. There should be two folders inside the main folder. "mimicB" and "mimicR"

2. "mimicB" is the Behaviour Pack while "mimicR" is the Resource Pack. Make sure to put them in their respectful folders inside Minecraft.

For a better guide on this, there is a guide for it in the "Installation Guides" tab on MCPEDL's home page for Android,Windows 10 and IOS.