Minecraft can surely get lonely at times. However, Minecraft Comes Alive PE aims to solve this problem by adding new types of villagers which you can interact with in a number of different ways.

In the future you will even be able to marry a villager and have kids with him or her. It’s a beautiful way to evolve in the world of Minecraft and it makes the game a whole lot more interesting. This is the first beta of the mod and as a result there’s many features missing, but for being the first release this is absolutely one of the best mods we’ve so far reviewed!

Create a new world and make sure to set it to survival mode. Once you’ve loaded the world there will be a Crystal Ball (ID: 4000) in your inventory. Tap on the ground with Crystal Ball to continue. 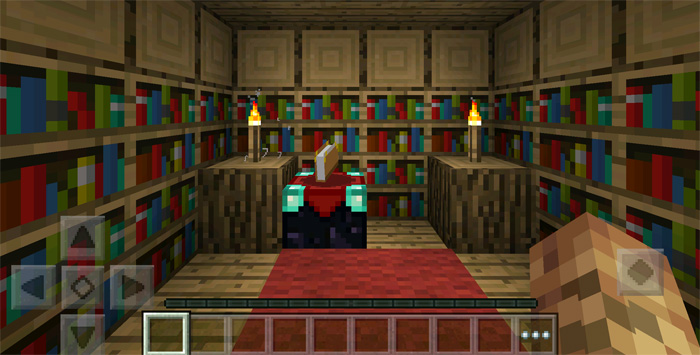 Next you will find yourself in a small room with some bookshelves and an enchantment table. Tap on the enchantment table to begin deciding your destiny. A GUI (graphical user interface) will pop up displaying two different options: Male or Female.

As I want to be a male I went ahead and selected Male. But if you rather be a female that’s totally fine!

The next question which will appear will ask which gender(s) you prefer, e.g. would like to marry. If you like both males and females you can select Either but in this case I selected Females.

The third question will ask your name. This is currently a work in progress so you can’t really do anything on this step, so for now just click Continue.

The fourth and final question asks you of your destiny. The option which you pick here will influence your life heavily, so be careful!

As of writing this only the None of these option worked. But in the future all of them will work obviously.

Now when you’ve selected your destiny it’s time to go out interacting with some people.

It’s really beneficial to pick a world seed which include a village at spawn. Here’s a bunch of different such seeds or just type in ibuild in the seed generator to find one quickly.

There are loads of different people to interact with but I decided to approach this girl. Long-tap on the screen to see the Interact button in the bottom center of the screen. 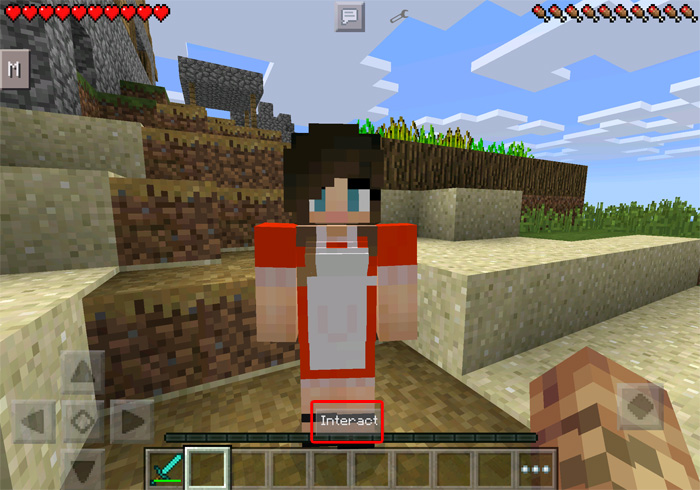 A GUI will open displaying all kinds of different information about the woman. Her name is Elly and she works as a baker. She is apparently a peaceful person but unhappy for some reason. She is not married so maybe I’ve got a chance to cheer her up and marry her.. who knows!? 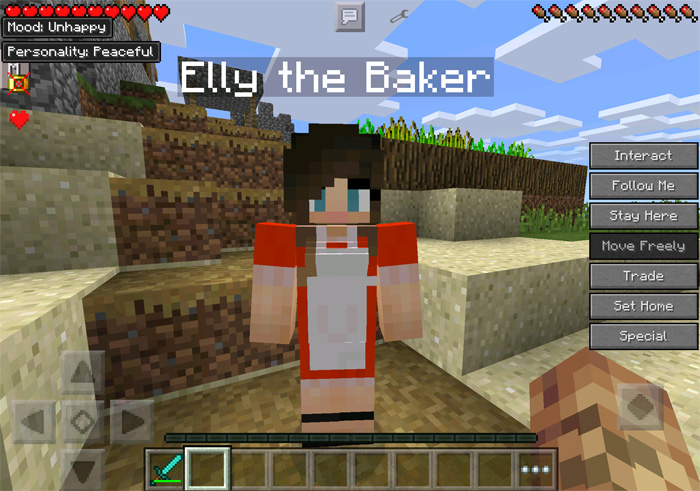 Currently most of the interaction buttons on the right are a work in progress so I can’t really talk with her yet so I suppose this will have to wait for now.

The only working interaction buttons are the Follow Me, Stay here and Move Freely buttons. All of them are self-explanatory, right?

I asked her to follow me and we went to the beach to have some cake. Nice, huh? 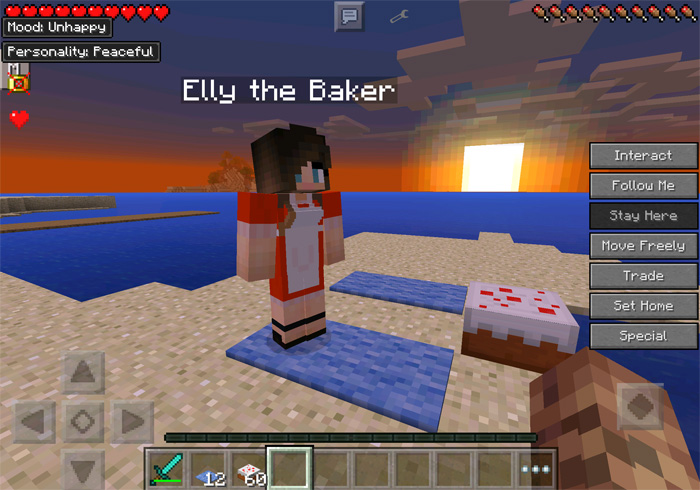 As mentioned previously, this is still an early beta version of the mod so many of the features are still not implemented. But by the looks of it, it has a lot of potential of becoming something amazing!

Most of the items so far implemented doesn’t work but they should be able to give you an indication on what kind of features you’ll be able to expect in the future.

Villagers Come Alive is an addon similar to this mod. Now available for 0.16, 0.17 and up! Click here!