Are you really satisfied with Minecraft Live 2020 Mob Vote result? Did you also vote for Iceologer or Moobloom? Of course, you did! The results are quite unfortunate this year, don’t you think so? It’s already decided that Glow Squid will be added to Minecraft. It looks like you have no way to change that. However, this is not entirely true, as with this addon you can add all these 3 mobs to the game.

Don’t you seek another challenge?

Imagine yourself exploring desolate mountains covered with snow. Nobody anywhere. You are completely alone, lost in the middle of pointed peaks. Oh, and it’s snowing! Suddenly a villager dressed in blue appears in your view (isn’t it a rhyme?).
What, the blue villager? He doesn’t really look like a wandering trader, this one is different. I’ve never seen him before! Your last chance for a rescue? Maybe, but what you know for sure is that you have to follow him to find out who he really is.
So, you are slowly approaching him. You are still looking at him from a far distance. You see his dark gray eyebrows and his red eyes.
Hmm, he doesn’t look as friendly as you first thought. In fact, he looks pretty scary.
Nevertheless, you will try to get even closer to him.
At the moment, he suddenly spot you. Silence. Just you and a strange blue little man in the middle of desolate mountains.
Suddenly, he begins to raise his hands, as if he is casting a spell. What is happening?
Above yourself, you see a huge cloud of ice.
You have no chance to get out from under the ice cloud. The ice cloud is falling on you. You lost two and a half hearts + another half a heart by falling.
What are you going to do now?
Wait, are you just dreaming?
No! With Minecraft Live 2020 you can make this adventure real. Download the add-on and complete your story!

Glow Squid won this year’s Mob Vote, so this shiny entity originally from Minecraft Earth will be added to Minecraft – probably in version 1.17. This addon gives you the chance to try this entity out today! Glow Squid is interesting mainly because of it’s shimmering texture. In all other cases, however, this entity is identical to the original Squid, which was added really long time ago – in Minecraft Pocket Edition 0.11.0. The positive thing is that in Minecraft 1.17 we get snowier snow and glowier oceans, but honestly I’m waiting for dirtier dirt! Haha, I’m just kidding, of course. If we don’t get new material and a render controller for animated textures with this entity, I’ll be seriously disappointed. 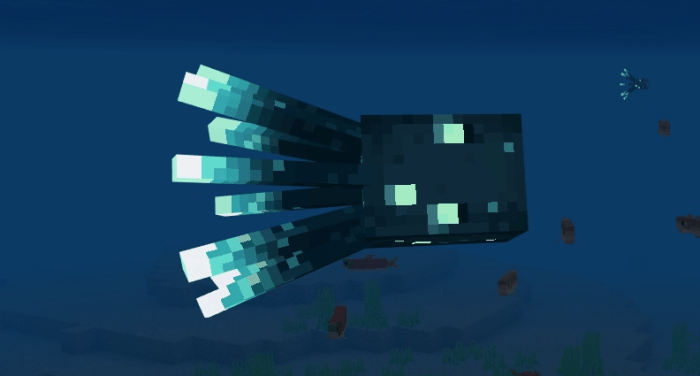 Iceologer is a brand new mob from Minecraft Dungeons. Yes, if you read the story at the beginning, you already know that it is a hostile entity. Iceologer would be a great specialty of the otherwise desolate snowy mountains that will come to us in the Minecraft 1.17 Update. It is an entity with a completely new attacking technique. Iceologer throws clouds of ice to players, snowgolems, iron golems, wandering traders and villagers. Glow Squid won by only 5.4 % in the final vote over Iceologer.
People were apparently affected due to the 2018 vote, when Phantom won. That’s pretty much why they didn’t vote for another hostile mob – Iceologer. 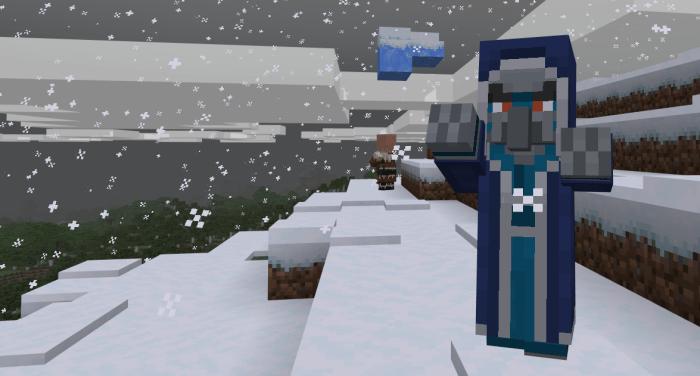 Moobloom is a new type of cow originally from Minecraft Earth. It is a peaceful mob living in flower fields. Like Mooshroom, you can shear this cow to get the flowers that grow on it. Like other types of cows, this one also gives milk. The developers also mentioned mysterious interaction with bees, unfortunately we didn’t receive further information. This entity was eliminated in the first round of voting, finishing 6.5 % behind Iceologer, who was only 2.1 % behind Glow Squid in the first round. 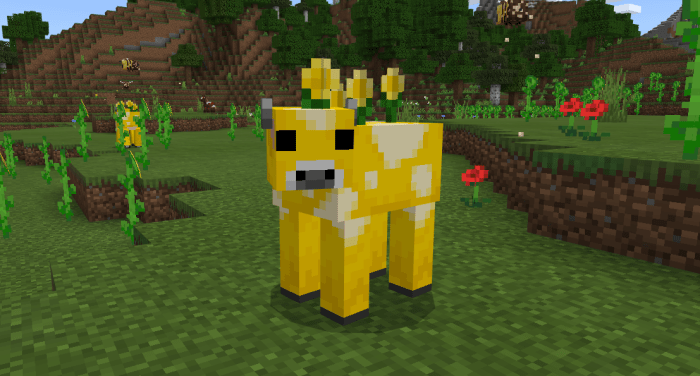 The addon contains all 3 already mentioned mobs. All these mobs have fully implemented functionality, animations, sounds, compatibility with all 29 Minecraft supported languages, custom particles, spawn rules, loot tables and much more!
The mobs design, textures and sounds used in the Minecraft Addon are the property of their respective owners. (Mojang) Please keep the official download link, when you share the addon. The Minecraft Live 2020 Addon is protected by copyright law.

Minecraft Live 2020 Addon trailer: https://youtu.be/XqYGnzei2tw
All important information can be found in the trailer!

Download Minecraft Live 2020 Addon.mcaddon, click on the file in a file explorer to import into Minecraft. Importing will occur automatically. Once it is finished, choose a world, go to Add-Ons section and enable resource and behavior pack for the world. When you import one of the packs, the second one should be enabled automatically, thanks to defined dependencies in manifest.json.