Mob Squad is one of the funniest animated Minecraft series which I’ve come across. It had for some reason slipped by my radar until today but I watched the first episode and boy it’s hilarious! This texture pack takes some of the characters from the series and brings them to life in Minecraft Pocket Edition. The creator claims to have designed them himself and they are obviously based on the characters in the animated series.

Before downloading the texture pack I highly recommend to watch some episodes. It’s brilliant – you will love it! It’s a quite old series so it’s entirely possible that you’ve already watched them.

Alright, so let’s have a look at the textures. Keep in mind that it’s only the mobs which have been changed – nothing else. 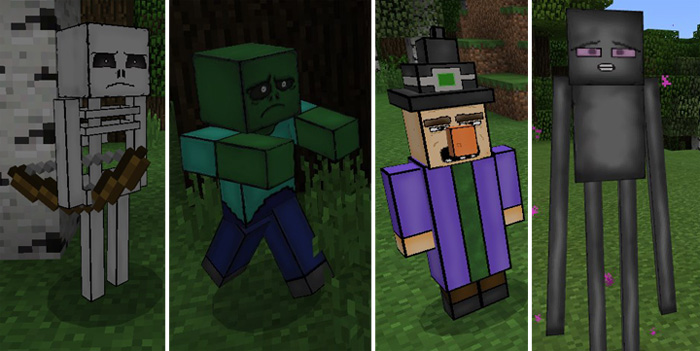 This texture pack also includes textures for the chicken and the cow. However, those textures are based on some of the creatures in Hay Day gaming app. It’s a preview for an upcoming texture pack.

There’s also an optional map which you can download and use with the resource pack. It includes Mob Squad’s headquarters and Steve’s house as featured in the animated series.