Bored of killing Zombies every night in minecraft or killing ender dragon or wither more than 10 times?, This is one of the many indicated places, Monster hunter craft Add new items to the game, AND 30 new mobs to the game! , The title may be familiar to you If you played on consoles like The Psp, 3DS or WII

Attention here, All items can be obtained through commands, or trade with The Seller mob, Item ID Code: mh:

Give you speed and jump effects

Regenerate all hearts and give you speed and jump effect 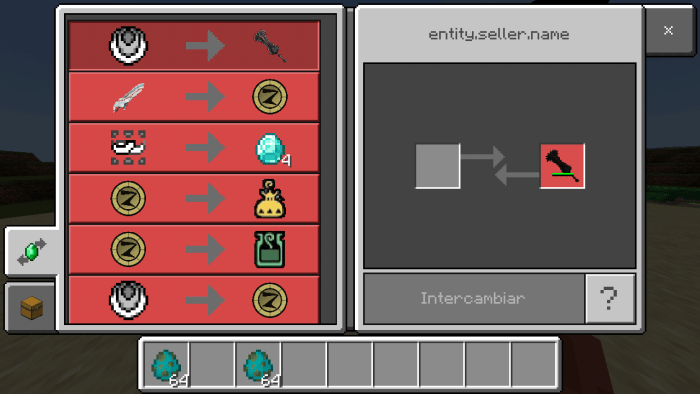 You find the seller in plains

With the You can do missions, Each monster drops an item called mission, With its name with that item you can exchange it for zenny to make trade with the seller 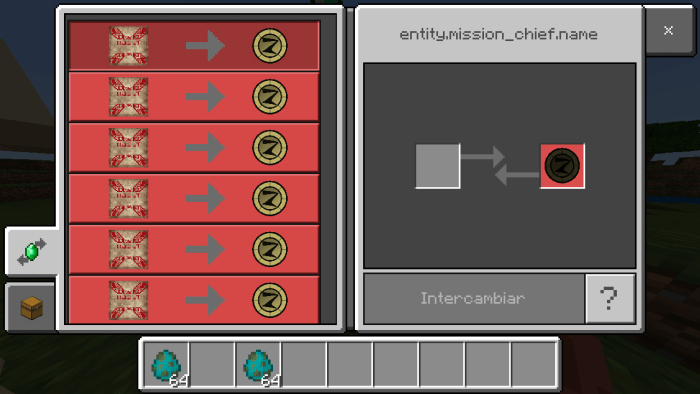 You find the mission chief in plains

Below you will see 30 new creatures added in this addon Code for commands: mh: 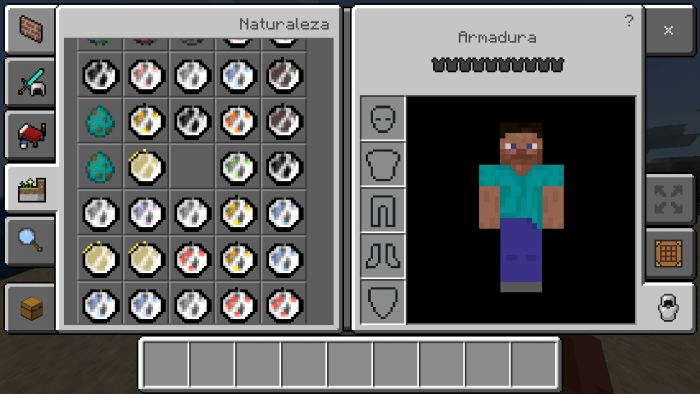 You will find it in green areas, such as plains

You will find it in snow areas

Velociprey are small carnivorous Wyverns Bird that hunt in groups

You find the velociprey in groups for 3 or 5 in Plains,Forest

The Giaprey are Wyverns Bird close to the Velociprey introduced in Monster Hunter 2, they live in cold areas

Attack all monsters and player.

You find the yian kut ku in green zones,Plains

You find the jagras In jungle biome

You find the great jagras in jungle biome

The odogaron is a quadruped monster with a shape similar to that of a wolf or a gorgonops, a group of prehistoric terapsids the odogaron has a red coloration and large and sharp claws, on its tail it has spikes it also has great speed and agility in combat

You find the odogaron in snow biomes

The barroth has the appearance of a dinosaur, The barroth is usually in deserted areas stirring up sand or mud to have that mud or sand on top of his body which expels him in combat causing the mud to catch his enemies and immobilize them

You find the barroth in Desert biome

The anjanath is a tyrannosaurus-like brute wyvern resembling the great deviljho, Anjanath has a pinkish-red coloration and black fur covering his back, Anjanath has large undeveloped wings and a crest on his head that he uses to sniff out prey

Have Radius 32 blocks For attack you with fireballs

You find the anjanath in plains

The deviljho is a brute wyvern with a large size, Its appearance is similar to that of a tyrannosaurus It has a green coloring, On its back and neck a red coloring, Also when it gets angry it releases a ray from its mouth that has dragon element

Deviljho has radius for 64 blocks to attack you with fireballs

The glavenus is a brute wyvern with a large size, It is based on a carnotaurus has a red color, Dark Blue And its tail is shaped like a sword which has a metallic blue color, which when heated with its mouth It turns a fiery color fiery being able to defend itself and drive away its attackers in few movements

Glavenus has 32 blocks radius for attack you with fireballs

You find glavenus in Nether

Rathalos is a flying wyvern, with red, white coloring and large developed wings, in addition to being the main monster of Monster hunter

Damage:40 And attack with fireballs

Rathalos has radius for 32 blocks to attack you with fireballs

Attack all monsters And player, except rathian

You find the rathalos in plains,Mountains

Sorry rathalos not fly :(,it coming soon in updates

The rathian is the female version of the rathalos, the rathian has a green coloration, with white, and large developed wings but rarely uses them, it is more terrestrial than aerial.

Attack all monsters and player,Except rathalos

Rathians has 32 blocks radius to attack you with fireballs

The tigrex is a flying wyvern, with yellowish and blue coloration, it has large wings that are not well developed, so it rarely flies

You find the tigrex in plains,desert and snow.

Nargacuga is a flying wyvern with a body similar to tigrex, Nargacuga has a black coloration and fur. Of this color, His head looks like that of a cougar but his jaw like that of a bird.

The diablos is a flying wyvern, with a large size and a large head with 2 large horns, the diablos has a sand colored coloration, since he spends it stuck in the sand. His wings instead of using them to fly, he uses them to dig on earth.

You find the diablos in desert biome.

The monoblos is a wyvern similar to the Devil, Because this is a relative of it, It has a brown coloration, And a thick skin This also usually gets into the ground to dig

You find the monoblos in desert biome.

The khezu is a worm-like flying wyvern, And white coloration, It does not have eyes, But it can find attackers through its sense of smell, This is usually in caves or swamps

You find the khezu in swamp biome.

The basarios is a flying wyvern, With a thick and rocky skin, With gray coloration, The basarios is the juvenile version of the gravios, this one usually hides in the ground and is confused with rocks

You find the basarios in nether.

The gravios is the adult version of the basarios, It has a great hard skin, And almost impenetrable, Its only vulnerable point is its chest, It has a large tail and rocks on its back it has large developed wings and a ray with which it drives away any attacker

You find the gravios in nether.

The cephalos is a wyvern piscine, With arenistic coloration, The cephalos by its head reminds of a hammerhead shark, This gets into the sand as if it were water

You find the cephalos in desert biome.

The plesioth is a wyvern piscine, that inhabits water areas, It has a large size, It has scales and Blue, Orange, Yellow and white coloration.

You find the plesioth in beach.

The agnaktor is a leviathan that appears in monster hunter 3 It inhabits hot places such as volcanoes The Agnaktor is a monster very similar to the lagiacrus unlike that it has one more aspect of prehistoric lava crocodile, The agnaktor usually uses lava as protection in the combat Since it has been seen that she is going to rivers of lava to Fill his body with her and create a warm layer on her body

You find the agnaktor in nether.

The lagiacrus is a large leviathan that dominates the seas, They have a reptilian body, And a dark blue with white color Its neck looks like that of a cobra, It has large scales with brown color on its back and neck

You find the lagiacrus in Beach.

The akura vashimu is a carapaceon introduced in monster hunter frontier, its appearance is that of a scorpion but it has some crystals on its body, tail and pincers, it has behaviors equal to those of a scorpion this is usually seen in deserts

You find the akura vashimu in plains and desert.

The Kirin is a very tough and tough Elder Dragon, its appearance is like that of a light blue Unicorn, its horn is a blue color, it has a quite remarkable and beautiful mane, and it has red eyes.  The Kirin is Electric, being able to invoke very dangerous Lightnings, in addition to trying to nail his usurpers with his horn, he is fast and agile.  The Kirin is very strange to see, making hunting difficult.  The Kirin can be seen mostly in desolate places like the mountains.

Kirin has 32 block radius to attack you with lightnings

You find the kirin in snow mountains,and extreme hills

The gogmazios is an old dragon with a large size It has a large scaly skin that releases a black oil which is sticky and slows down to catch its prey, Also from its mouth it releases a jet of hot oil, It has large wings Not very well developed but still able to fly.

Gogmazios has 64 blocks radius to attack you with fireballs

You find the gogmazios in extreme hills  and mountains

Lao shan lung It is a dragon With colossal size this is in 4 legs but it can also stand on 2 legs, Lao shan lung does not have great aggressiveness it ignores hunters, It only wanders looking for mineral areas to feed on them.

You find the lao shan lung in mountains and extreme hills.

Note:This addon is a version oficial for monster hunter addon Is not beta.