Personally, I think that the Nether Update was one of the best Minecraft updates to ever arrive! My only gripes with it were the lack of mobs, and that all biomes except for the Crimson Forest didn’t get any unique mobs and just use already existing mobs. This addon will try to fix that!

This addon will be introducing over 10 new mobs to the Nether. Most of them are fairly similar to overworld mobs, but with AI changes, model changes and more! There’s also a new boss coming! This boss is a work in progress but will be finished eventually! Hope you enjoy this addon. Remember to enable experimental gameplay or the new mobs will not spawn. Now, let’s take a look at these new mobs! 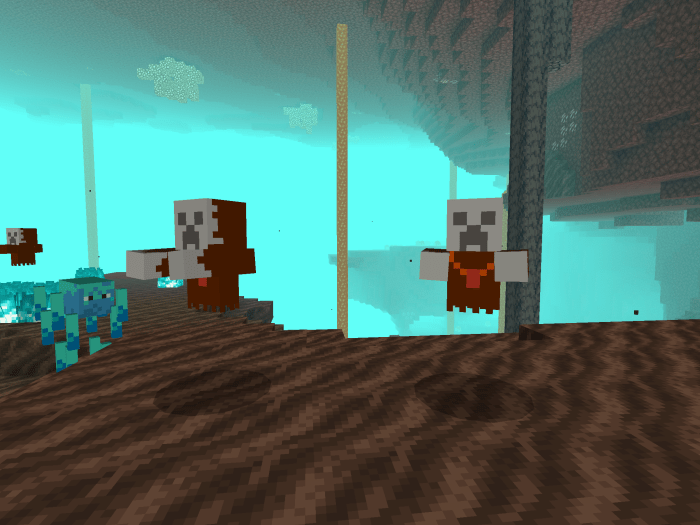 Our first mob to look at is the Nether Wraith! This is a mob, that I promise you, will make your time in the Nether a literal HELL. They are very annoying hostile enemies that will constantly pursue you and shall stop at nothing to avenge themselves and their other wraith friends. They constantly teleport around, are very fast, immune to fire, don’t make any sounds and are just plain annoying! They will attack you, all wither skeleton types and all Piglin types. However, strangely, they will stay away from zombified Piglins and blazes. Pro Tip: Stay near zombified Piglins or Piglins to keep nether wraiths off your tail. They have 16 health, deal 6 damage per attack and will drop bones if defeated. You will find these guys everywhere in the nether 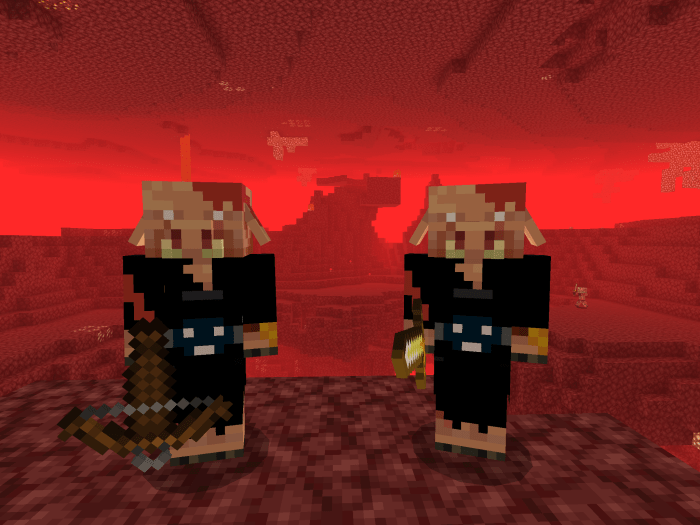 Next mob introduced is the Piglin Assassin. These are Piglins that scout all around the Nether, searching for anything they can take over or use for resources. They behave very similar to Piglins, they can wield  golden swords or crossbows and can be bartered with, but they are much more powerful then regular Piglins and won’t be scared by zombified Piglins! They are stronger then regular Piglins, but weaker then Piglin Brutes. They have 28 health points, deal 7 damage per attack and might drop arrows if killed. They will spawn anywhere in the nether. 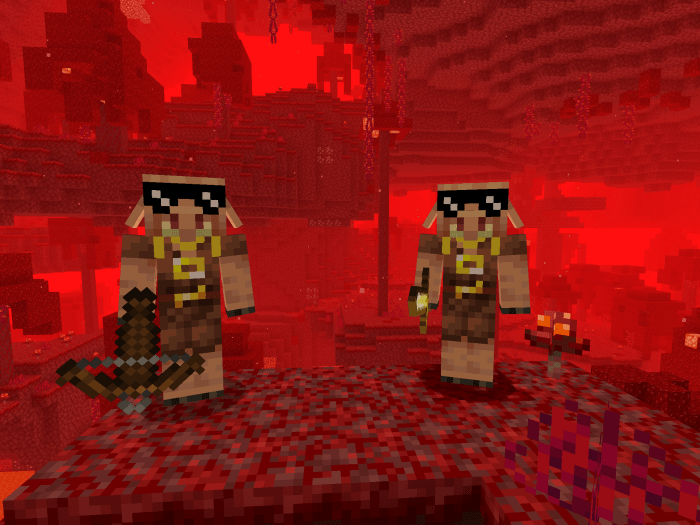 Next mob to look at is the Gangster Piglin! I made this mob mostly for fun, it’s a Piglin that looks much more swag then the normal ones. This mob was actually inspired by the “We’re the Piglin” song by SystemZee, check it out at https://www.youtube.com/watch?v=lM5bt8IRI-g&feature=share They behave pretty much the same as the normal Piglins, but they have slightly better stats. Also, their gold chains they wear are heavy, so they are a bit slower then other Piglins. Have 21 health, and deal 5 damage per attack. They will spawn anywhere in the nether, though at a lower rate then other nether mobs 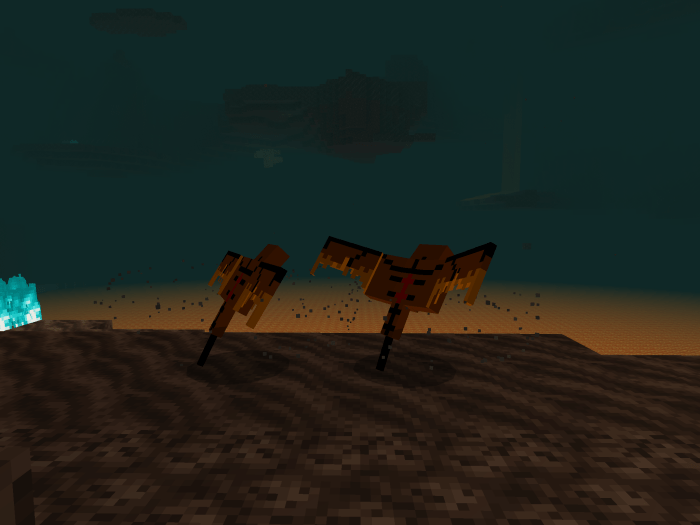 As if normal phantoms weren’t annoying enough already, this new mob is the Molten Phantom! It’s a Phantom that is seemingly made out of lava and Netherrack… but it is still as dangerous as a normal one! Even more dangerous then a normal one, in fact. It has higher stats, is faster and won’t be affected by fire! It has 32 health, deals 8 damage per attack and drops Netherrack if killed. They spawn anywhere in the nether, but are fairly uncommon! 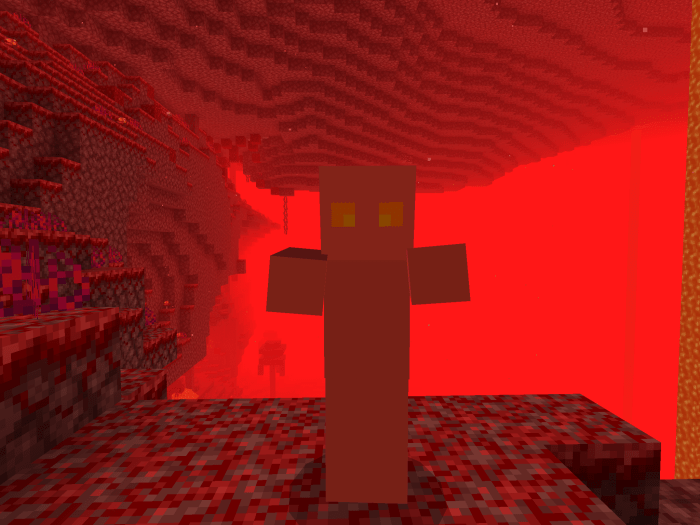 Our next one is the Crimson Beast! As it’s name suggests, you will find these mobs spawning in the Crimson Forest biomes. They are fairly slow, but have a lot of health and deal a lot of damage with each attack! It has 80 health, deals 13 damage per attack and drops rotten flesh and occasionally gold if defeated. 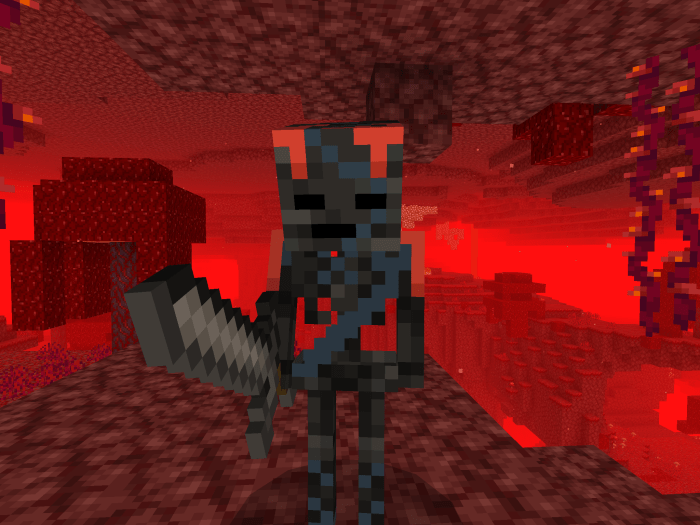 The fifth new mob here is the Vined Wither Skeleton! It’s a Wither Skeleton that has been severely damaged from everything it’s been through, and is covered in weeping vines. We can only assume that they were stranded by the other wither skeletons in the crimson forests, and they have stayed there for the entire time. While having low health, they deal almost enough damage to kill you in one hit! They attack you and Piglins, and they have 15 health and deal 14 damage per attack. They spawn in Crimson Forests 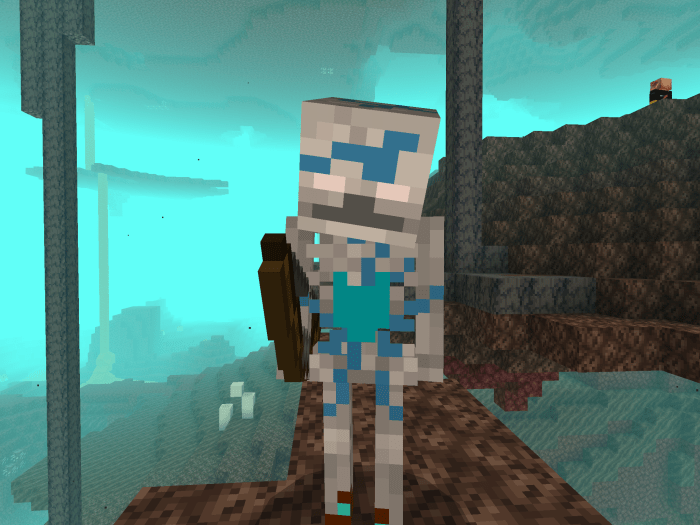 Up next, the Possessed Skeleton. Just regular skeletons that wandered a little too deep into the soul sand valleys, and were corrupted by the deep soul power within. They are much more powerful then regular skeletons, they deal more damage and fire arrows more rapidly then regular skeletons. Have 50 health and deal 5 damage per attack. As you probably guessed, you’ll find them spawning in Soul Sand Valleys. 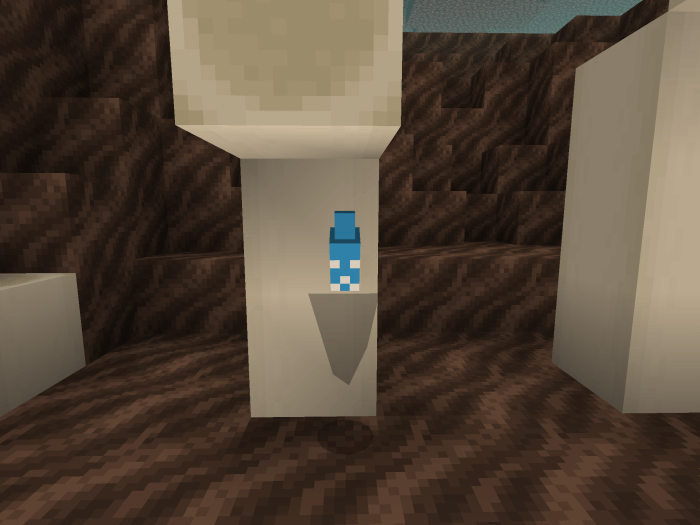 This mob is the Lost Soul! It’s a passive mob then harmlessly floats around the soul sand valleys at high speeds. Other then that, they don’t really do anything, but they do have custom sounds! They have 8 health points and spawn in Soul Sand Valleys. 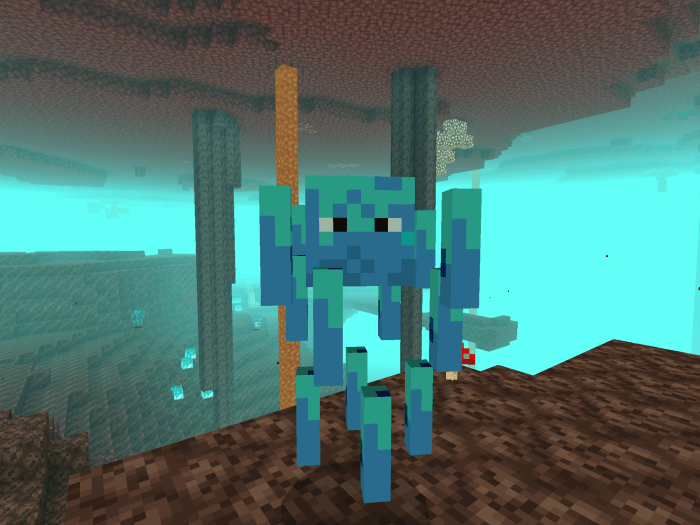 Our next mob is the Soul Blaze. It’s a more powerful variant of the Blaze! It will attack by either charging towards you to deal melee damage, or occasionally firing explosive fireballs, be careful around it! Has 35 health, deals 11 melee damage and may drop Blaze rods if defeated. Spawns in Soul Sand Valleys 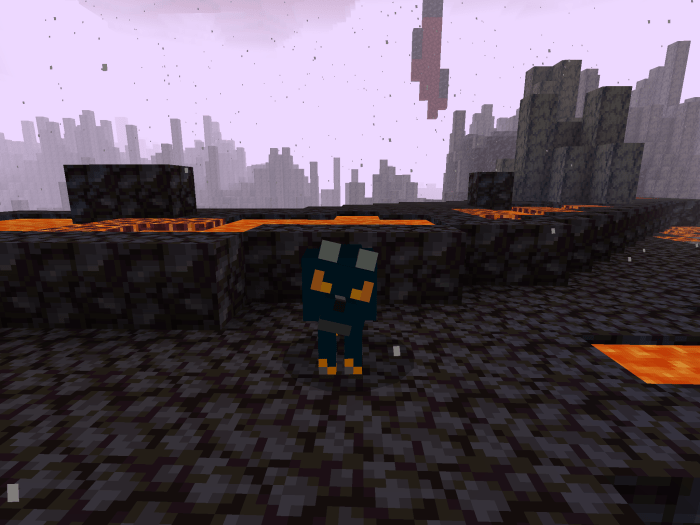 Next mob to look at is the Hellhound! It’s an aggressive, wolf like enemy that attacks you and sometimes striders with either melee attacks, or by occasionally shooting a fireball. Has 25 health, deals 13 melee damage and may drop magma cream if you kill it. They spawn in the Basalt Deltas biome. 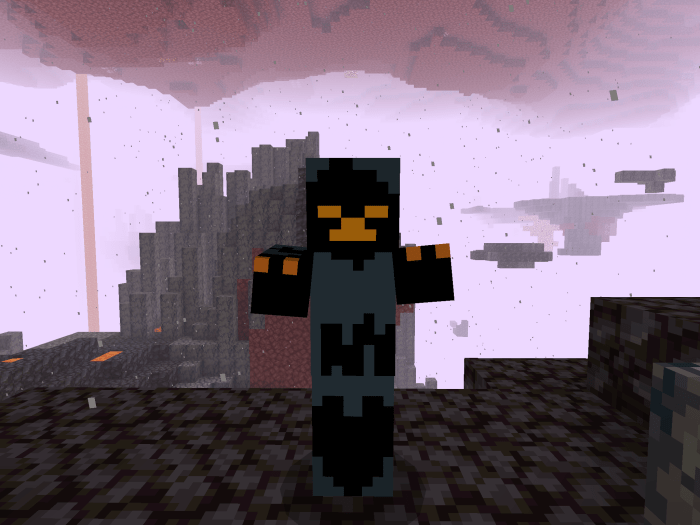 This is the Ashen Zombie. It is a new, fairly tough zombie that will spawn in Basalt Deltas. It’s slow, but will deal moderate damage with each attack. They also have a baby variant, which is even faster and more annoying! They have 30 health, deal 9 damage with each attack and might drop some magma cream if defeated. 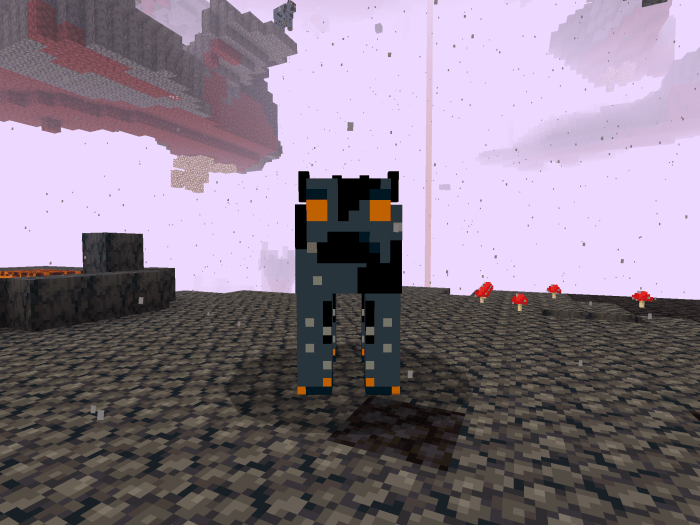 Up next, the Basalt Walker. While they may look pretty big and scary, don’t worry, they are passive mobs. In fact, they happen to already have a saddle on them, so you can ride them. If you have a regular stick on you, use it to control them around! You can also feed and tame them with either rotten flesh or Nether Wart! They are like the horses of the nether, as they will work better on land then the Strider. They have 50 health points and if you decide to kill them for whatever reason, they will drop their saddle. Find them in Basalt Deltas! 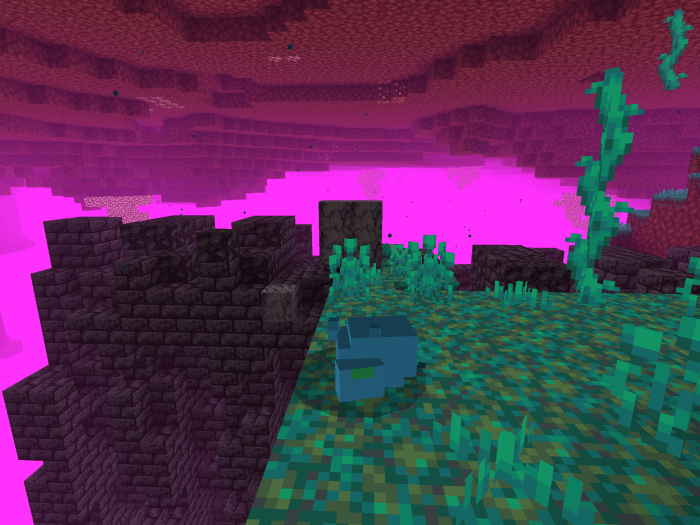 If Endermites somehow make their way into the Warped Forests, then they will be corrupted by the mysterious energy inside and become much stronger! Unlike the Endermite, the Corrupted Mites can actually be a major threat, especially if you get swarmed! Have 26 health points, deal 7 damage per attack and may drop an Ender Pearl if killed. You’ll find them spawning in Warped Forests 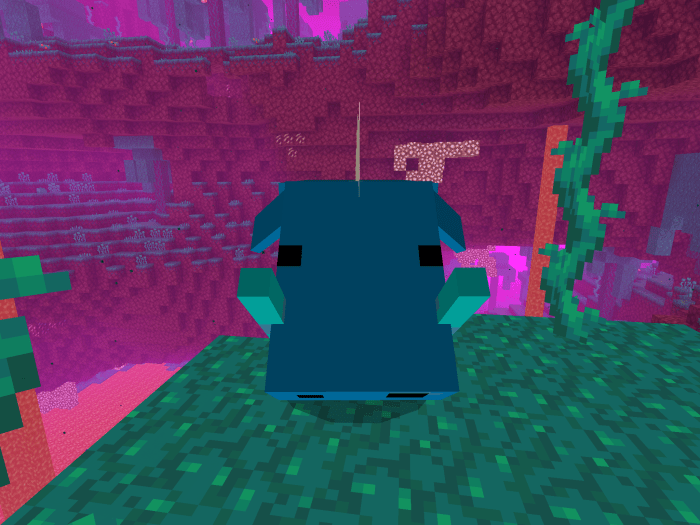 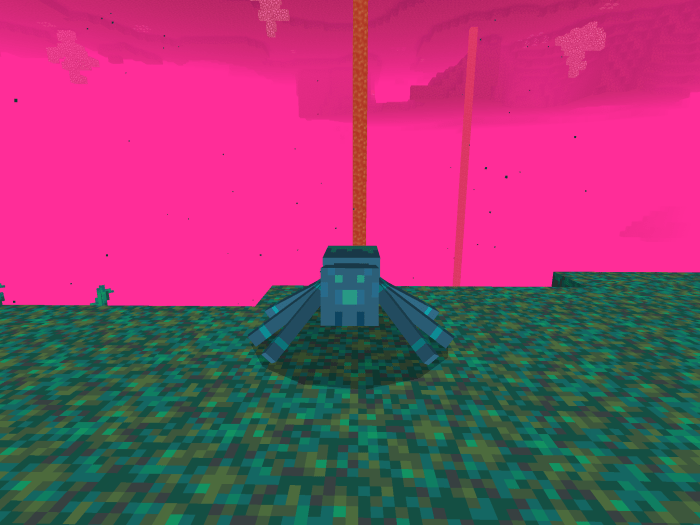 The final normal mob added by this addon is the Warper! It’s a warped variant of the spider. It’s much more aggressive then the other two spiders, and deals more damage and can teleport! It also flies sometimes, but it’s fairly uncommon. Has 32 health, deals 9 damage per attack and may drop an ender pearl if killed. Of course, you will see them spawning in Warped Forests. 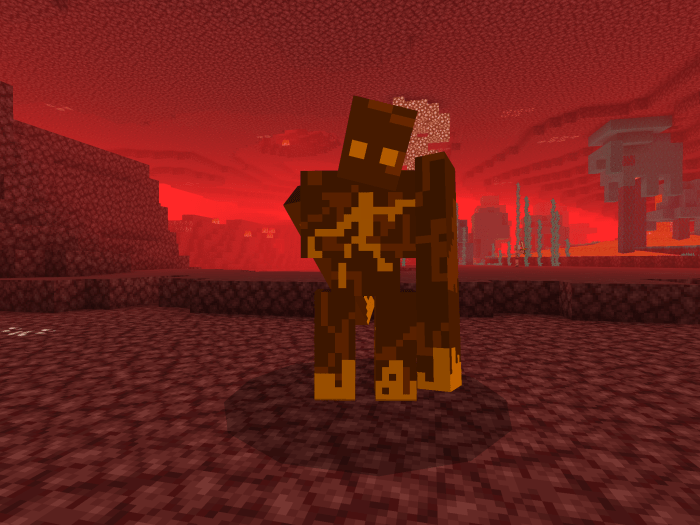 Now, the boss! The boss is known as the Ancient Golem! Again, this boss is not ENTIRELY finished yet, but it has some interesting behaviours. It can teleport, and will attack by shooting projectiles and summoning tons of Magma Cubes! It also has a melee attack if you get too close. If you defeat it, you might get a totem of undying or you might get some Netherite! It does not spawn anywhere for now, you need to spawn it via an egg in creative.

*Gangster Piglin no longer drops gold armor, as I thought this was too overpowered and made it too easy to avoid piglins

*Reduced damage of Nether Wraith from 8 to 6

*Reduced health of Corrupted Mite from 32 to 26

*Fixed Ashen Zombie having a strange model under it’s head

*Buffed the Ancient Golem. It now instead has 200 health, deals 24 damage per attack and is bigger and faster!

*Warper no longer shoots projectiles, as this was causing it to simply not attack at all

*Mobs that are able to drown will now emit bubble particles underwater, similar to vanilla mobs

*Corrupted Mite and Soul Blaze are now hurt by water

*Crimson Beast is now always hostile towards the player

*Fixed a few other things