The More Swords PE Mod adds 9 swords to the game. Each new weapon has a unique power. For example, the Dawn Star, will set the enemy on fire and the Vampiric Blade will drain the enemy of its blood and regenerate some of your health. The powers of each weapon is nicely balanced and it’s definitely a nice addition to the game.

How to obtain the weapons?

Most of the weapons can be obtained by using one of the crafting recipes found further down on this page.

If you are in surival mode, you can also use the following text chat command to retrieve the weapons or the items required for crafting each weapon. 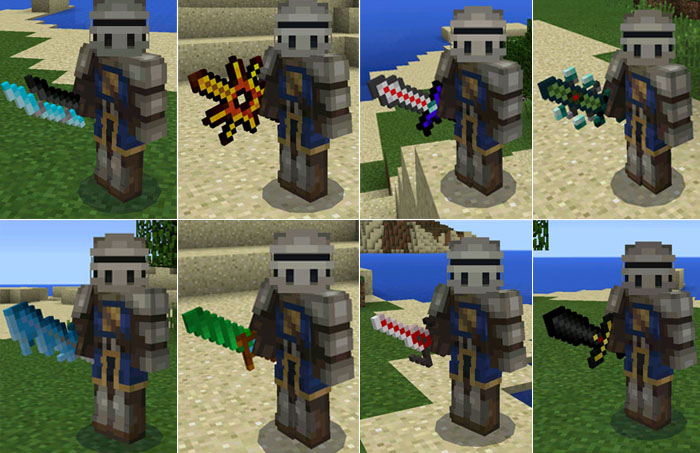 Let’s have a look at each weapon and see what they can do.

Sets mobs on fire and deals a total of 6 attack damage per hit.

Does 7 attack damage and will remove all active buffs from an enemy.

This weapon exists in-game but can’t be crafted. It doesn’t have any unique features yet either.

Adds a slowness effect to the enemy. It does only 6 attack damage which is the least (or the same to some) compared to all other weapons.

Poisons the victim and deals a total of 6 attack damage.

Drains some of the blood from the enemy (7 attack damage) and regenerates some of yours.

Adds a wither effect to the victim (-1/2 heart every 2 seconds for a little while). The initial hit does 8 attack damage.

It’s supposed to make the attacked mob fly up into the air but that doesn’t work right now. So currently it will just make 8 attack damage which anyway is quite nice.