Are you done fighting the bosses in Minecraft and want to give some use to your left over Enchanted Golden Apples? The Pesky Chicken Boss is here to solve that problem! If you think it is easy, think again. This is an extremely difficult boss to fight as it has the ability to summon The Pests and Wither Skeletons to fight for it.

How to summon the boss?

To summon the Pesky Chicken, just get a Name Tag and put “Loser” on it. You can also have a rare chance of finding it spawn naturally. 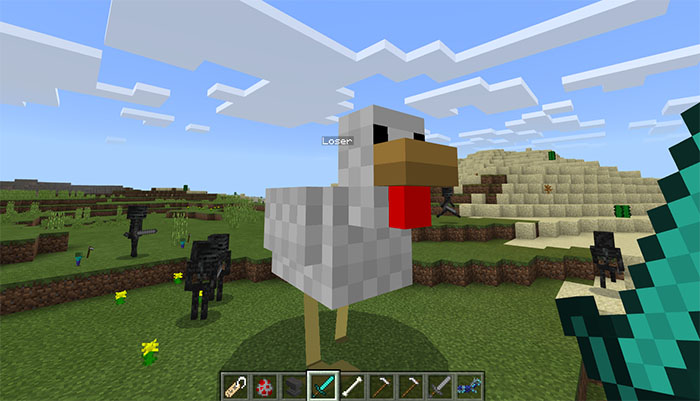 Despite it’s size, the chicken only does 1 attack, but inflicts levitation for 10 seconds. It will occasionally lay a wither skeleton to its aid.

The chicken will summon The Pests, which replace zombies. Pests only have 5 health (1 hit kill by stone sword) and deal only 1 damage, but will always get summoned in huge groups. Sometimes they will spawn as normal size and are passive. They always will hold a iron hoe.

You can sell the items you get by killing Pests to Fred the Dumpster Guy. He does not spawn naturally in the village, but can be spawned with a name tag with “Fred” on it. He takes most items that you obtain from Pests for some emeralds and diamonds. He wears a purple robe similar to a priest.

If you can’t find a village, no problem! If you turn on bonus chest when creating a new world, a map that leads to a village will be inside.

Do not attempt to fight this boss if you are not ready as death will be a high chance.