The Pixelmon Mod is probably the most enjoyed and downloaded mod of all time on Java Edition. However on Bedrock Edition there are only a few addons about Pokémon and none of these implements a deep combat system like the Java Edition Mod. With Scripting API we can get trough this limitation but these are supported only on Windows 10 so I decided to start creating it now to make it grow enough to have a lot of content when the APIs will be supported by all platforms

The development of the addon will go through several phases. The first is Combat System Test so NO legendaries battles, NO pokémon building(Exp, IVs, EVs), NO catching mons, … The main focus are combat system mechanics:

When all of these features will be implemented the addon will go to the next phase. 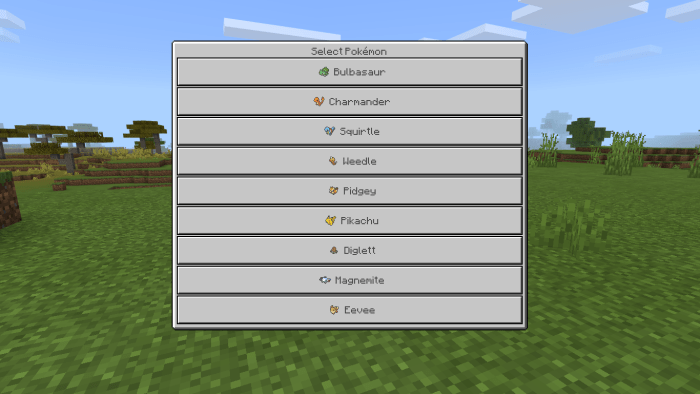 When a player join for the first time a world can choose one pokémon from those which are implemented.

To change the starter you can craft a PC with glass and iron, place it and left-click it to open the starter selection menu

To start a battle you have to find a wandering trainer and left-click him or you can do the same thing with another player!

The battle system is inspired by official Pokémon mainline games so is turn-based and every Pokémon has his base stats and 4 fixed moves. Level is set to 50 for every pokemon, IVs are set to 31 for all stats and EVs to 85 for all stats