This addon is capable of adding the mobs from this addon into your very own Minecraft world! Just remember that this addon isn’t just like any other addons, as it was dangerous and self-suicidal… just make sure to clarify that as a warning!

Wanna see something cool that I couldn’t do a long time ago? Well, why don’t you open up the vault and find out yourselves then? 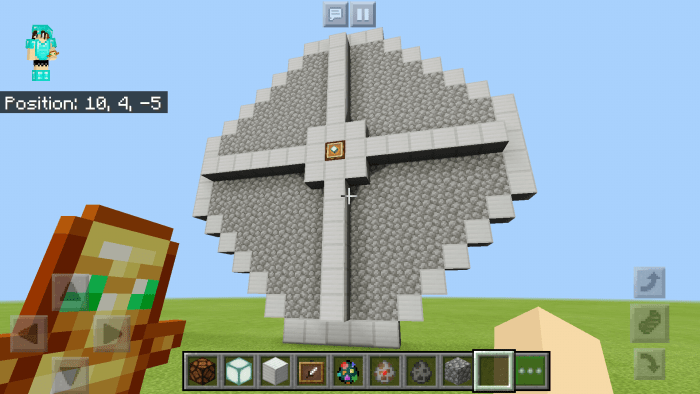 In this addon, it adds: 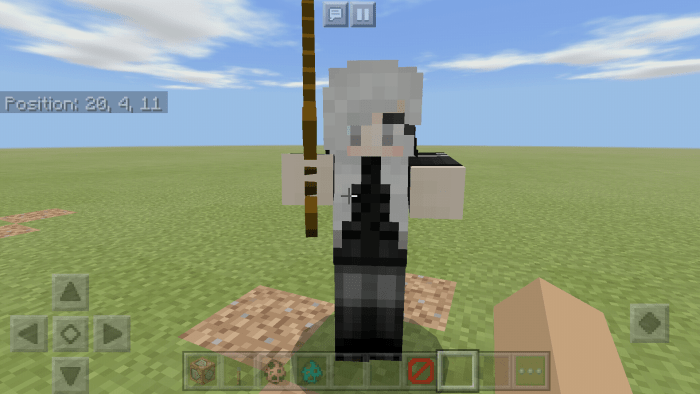 • She’s immune to fire and lava.

• She can deal 5 damage with her gold sword.

• She can be found in the Overworld but very rarely.

• She only attacks whatever provokes her. But, since she’s a neutral mob, you CAN, however tame her using potatoes from farming. Not the baked potatoes. You (probably) have a 40% chance of taming her.

• Once she’s tamed, she will now follow you instead of teleporting to you constantly every time you’re too far away from her. Just any other pets do. Well, maybe…

• She is considered as a boss, hence the bossbar above her. 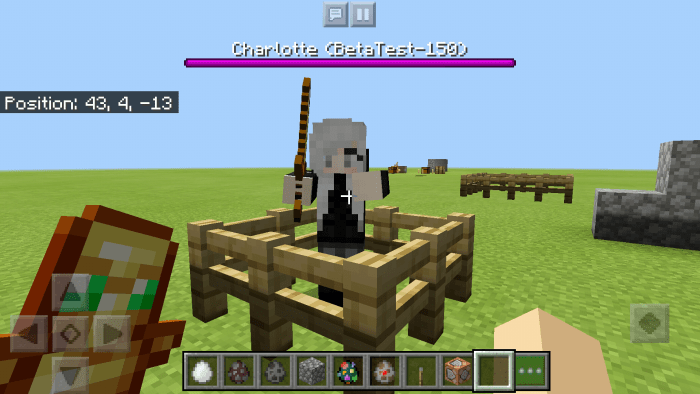 – Hatsune Miku and Slenderman has been permanently removed for the Final Frontier Update. Info about that is in the changelog below.

• Added Dyna Dynamite (Packs a punch!) and a Chunk Destroyer (Destroys an 8 by 8 chunk boundary.) 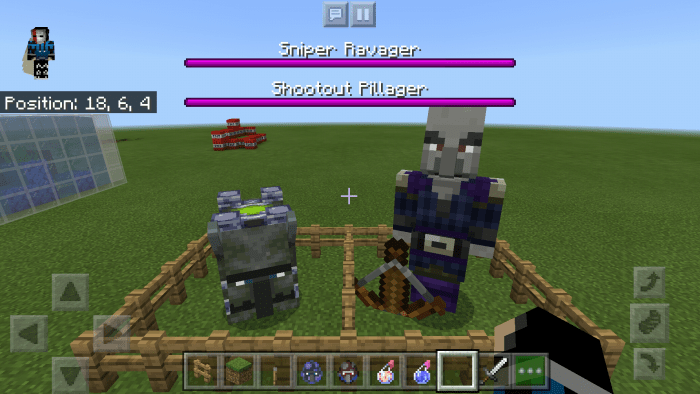 • Speciality: Deadly at close range. Far range, however? Well, he can shoot alot faster than a normal Pillager. He is also taller than any other mob in the game.

• He is considered as a boss, hence the bossbar above him.

• Disclaimer: Haven’t gotten the screenshot yet.. Same goes for some of the other new things added here. Next update is the Screenshot Update where I add the missing screenshots.

• It’s considered as a boss, hence the bossbar above it.

• ATK: Shoots 5 Large Fireballs at its target. Very hostile, too. 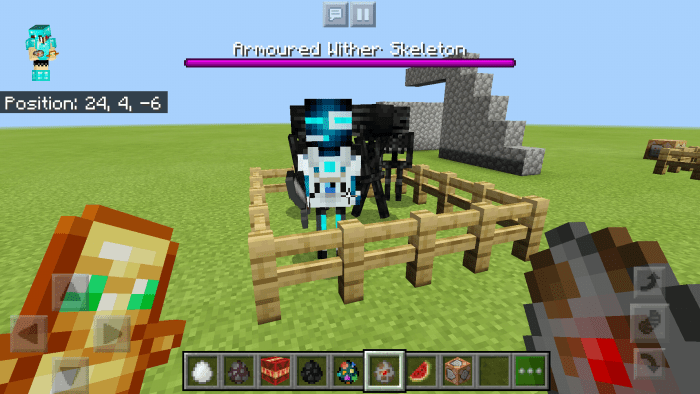 • ATK: Does 25 damage with its stone sword. A similar weapon to the Wither Skeletons.

• Just like the Shootout Pillager, the Wither Skeletons do not spawn with the Gunslinger.

• Its a neutral mob. It only attacks whatever provokes it.

• It’s no longer mistaken as a boss. 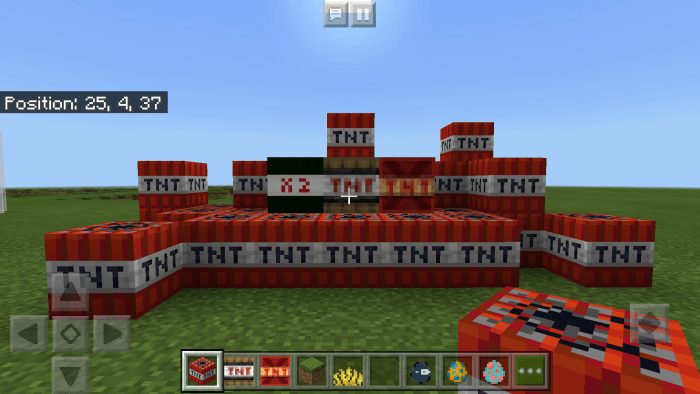 • Two additional TNTs have been added alongside the GregTech Warhead.

• When “/gamerule mobgriefing true”, it freezes the game when ignited, then… “BOOOMM!!!”, leaving a humongous crater with fire surrounding it.

• It can only be ignited with Flint and Steel or through a Dispenser. Using other ignition methods won’t budge it.

• Disclaimer: For low-end device users, it’s not recommended to have mobgriefing set to true, it will lag after performing an explosion.

• Also just a custom mob, not a block.

• Explosion radius: 30, cause fire around the crater.

• Again, not a block. Just a custom mob.

• Explosion radius: 100, cause fire around the crater. 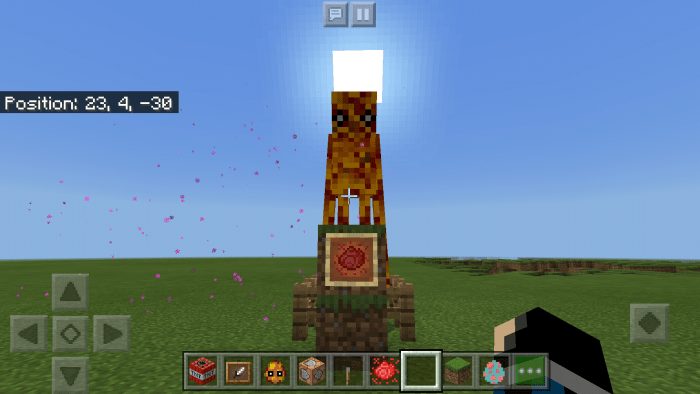 • Spawns in the Nether where ruined portals generate.

• Speciality: Has the right to kill the Ender Dragon. Drops a new item called the Crimson Nether Stalk. It has no purpose at the moment. Here’s an example of the Netherman attacking the Endermen. 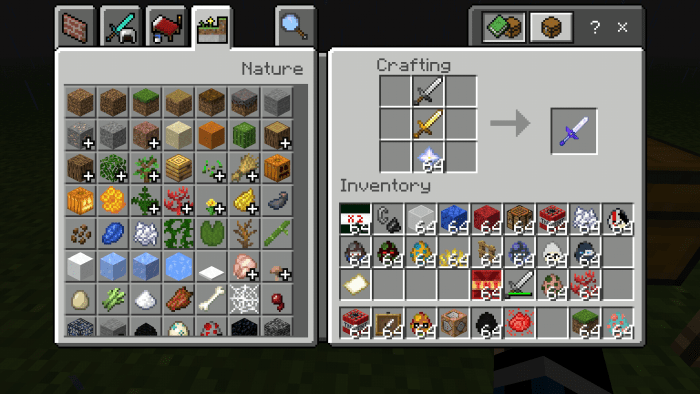 – Here’s the crafting recipe for the Excalibur. A new sword that gives you the following stats:

– Increases the wielder’s speed by 1.0

– Able to break every ore except Netherite Ore and Nether Gold Ore.

– Increases the wielder’s health by 30 and attack points by 50.

– No purpose at the moment. Drops from the Netherman apon death. 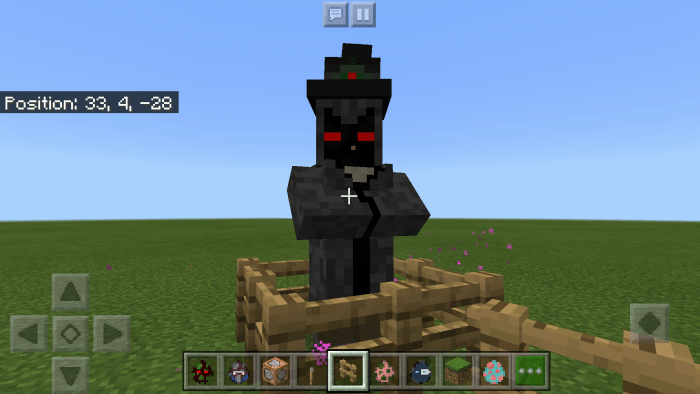 – Speciality: Can teleport, transforms into a Wither boss upon lightning strike. 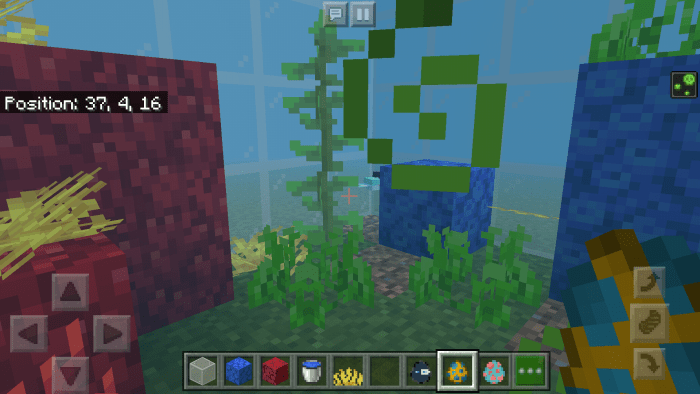 – Spawns in cold beaches and rivers among the highlights of the Savanna.

– Speciality: Fire immune. Transforms into a Spider upon lightning strike. It (Shockwave Pufferfish) doesn’t grow in size when provoked. 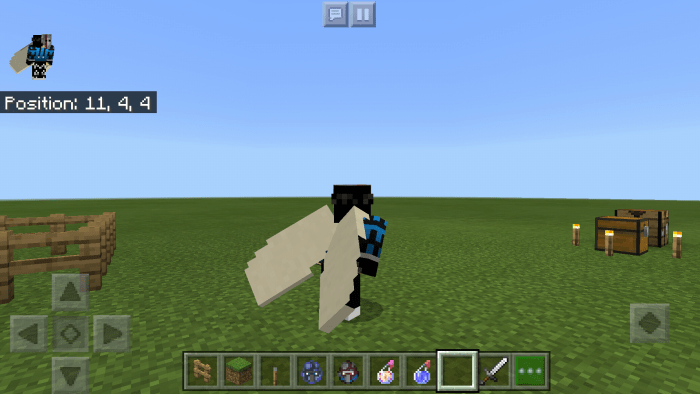 – Speciality: They’re now white in colour. No other things new to this other than just texture changes. 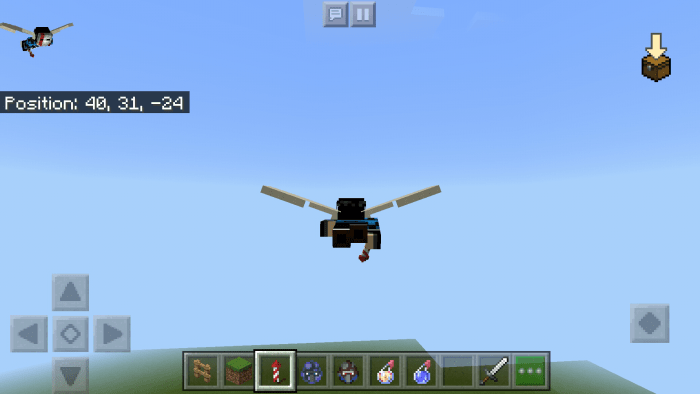 – Here’s me in flight with these wings. 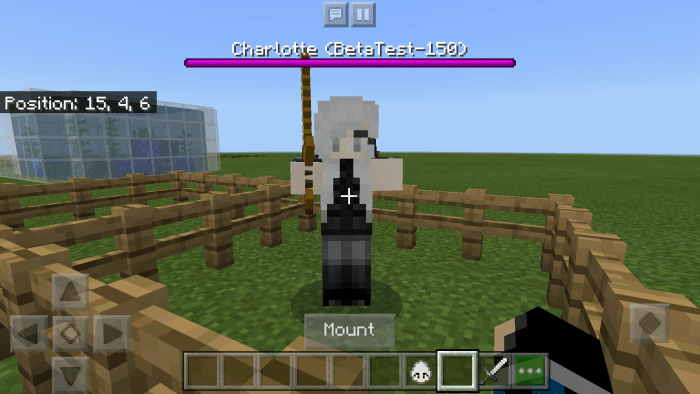 • You can now sit on Charlotte’s shoulders!

– By using a potato, you can tame her to let yourself sit on her shoulders. Trying to sit on her in Survival mode without taming her is still possible, it’s just not recommended because of her new hostile behaviour towards players.

– Umm.. It almost looks like I’m blocking her field of view with my legs… That’ll be fixed soon. 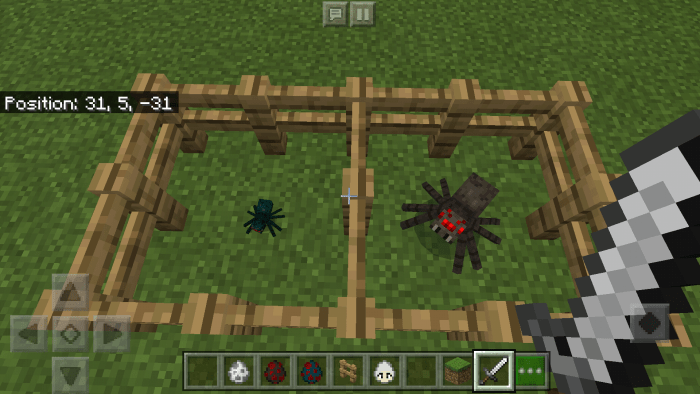 – Spiders and Cave Spiders are now a lot tinier than you think. Ghast also now shoot Fireballs a lot better than before.

Items and spawn eggs in the Addon: 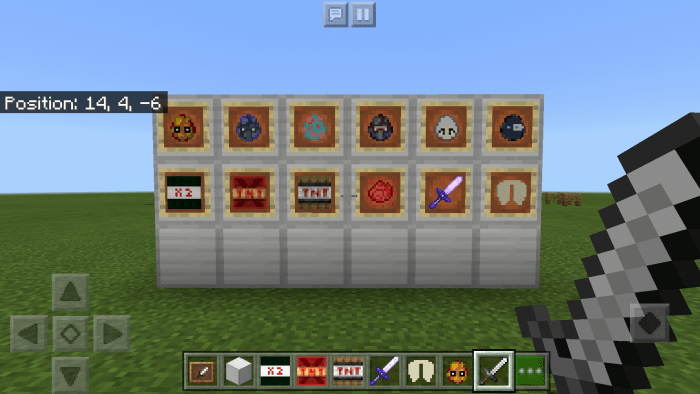 Reason why I removed Miku and Slendy:

- Hatsune Miku just doesn't seem to fit in with this Addon too well, as there's a lot of comments on this Addon's page where people have been ranting about the thought of adding things that are never fitting. That's why Charlotte's here to stay. For Slendy? Well, let's just say that adding other people's Slenderman Addon is already better.

- The Colossal Wither has its name fixed. Trust me. Same goes for the Gunslinger.

- A new mob called the Sniper Ravager has been added to fit alongside the Shootout Pillager.

The GregTech Warhead is currently under the beta build of performance fixing. Expect freeze frames when playing on low-end devices.

- Spawn rules have been fixed. It now properly works.

- Milk Stew has been temporarily removed, as we're looking forward to thinking about new ideas for more items. They will be added back soon.

- All spawn egg textures have been made to their respective mobs.

• The next update (1.1.2 update, which is called The Final Frontier Update) will be the last update. No longer will I accept anymore ideas for this Addon until I decided to receive ideas from y'all again. Don't expect me to receive ideas for custom models and advanced coding etc etc, as that was exploits and bully towards me and my Addon.

• A new Addon is under progress, expect that to be compatible with my Addons and other Addons as always..

• Twitter is the best place to send me great ideas about bunch of different types of Addons, Shaders and maps to make in the future. Don't give me ideas for texture packs, as there's hundreds out there that you and I knew were famous already.. ??

• Installation info has been extended so y'all can be nice. Not naughty. I may not be Santa, but I know a bad person when I see one.

• Addon support for 1.13 has been removed. Hence the title.

• Upcoming features listed above are delayed for a while. Patience, guys.

• Reason for banning Darkiplier and Jack the Illager Necromancer: Jack the Illager Necromancer is incredibly hard to code and even so, the attacks are still gonna be sloppy when fighting. I will however add him back to assure the compatibility of the behaviours of him with this Addon. Darkiplier will never make it to this Addon anymore. Because his skin doesn't fit well with the Json model of the Wither Skeleton. So, I removed him.

• Charlotte's health has been decreased from 2500 to 500 for good measures.

• All mobs are now custom mobs, no longer are they still replacing vanilla mobs.

• Function pack has been retested three times now. Hopefully it's not going to crash the game anymore..

- Able to ride on Charlotte.

- Allow all the mobs to spawn naturally in their respective biomes.

• I was planning to remove Darkiplier and add other mobs instead, since I can't find a proper Darkiplier skin anywhere on the types of websites I know.

• I have added a recap video back when I was testing my first Ravage and Savage Addon. Did you know? Back then, this Addon was originally called Miku and BetaTest Addon due to the uncertified name from me.

• Darkiplier's skin still looks glitched. I know that. I will be fixing that soon.

• The Slenderman and Markiplier update is finally here!

• Added Darkiplier instead of Markiplier

• Added Jack the Illager Necromancer (Thanks to BeeAltaria for that idea!)

• Miku no longer spawn in groups

• Cover for the addon has been changed to a custom cover. Thanks to the reporters on Twitter telling me to change the cover.

• The Slenderman and Markiplier update will be delayed a bit.. I promise I will release that update on Halloween!

• More screenshots were added in the description. Seriously though... those screenshots of the two mobs and their fight scenes took painfully long to get the best shots as to what I was going to expect...

• Screenshot of the fight scene is added.

• The pictures have been rechanged.

• Custom time has been removed, replaced with a post confirmation date.

• Added another supportive version (1.12) to confirm the experience of the addon.

• Both resource packs and behavior packs are now separate links.

- Review this addon for a video. Make sure you give credit to my social media. Hint: click on my profile and click on the social medias below my profile.

- Compete other people's addons with mine. Making a map with this addon is great. Just give me credit as always.

You aren't allowed to:

- Remodify this addon. You are only allowed to do so for personal uses only!

Download the addon on Mediafire or the official MCPE DL link given. If the upload fails, or you just can't download it. Report this issue to Omlet Arcade, Discord, MCPE DL or my YouTube channel. You are also not allowed to post this Addon on other websites and remodify this Addon and posting it to this website or other websites claiming that it's yours. You will be salvaged when you did so.