RoboCraft is a powerful robot which can be mounted and controlled by the player. It has many technical advantages such as the abilities to shoot missiles at hostile targets, run fast and jump high. It’s really the ultimate mountable vehicle if you want an easy and more powerful way to defeat hostile enemies in Minecraft.

How to use the robot?

RoboCraft is a powerful robot which can be spawned by the player in survival mode. All you need are four iron blocks and one pumpkin. Place the pumpkin on top of the iron structure as seen below to spawn the robot.

The player have several options for controlling the robot. By using a key (shears) a player can do the following actions: 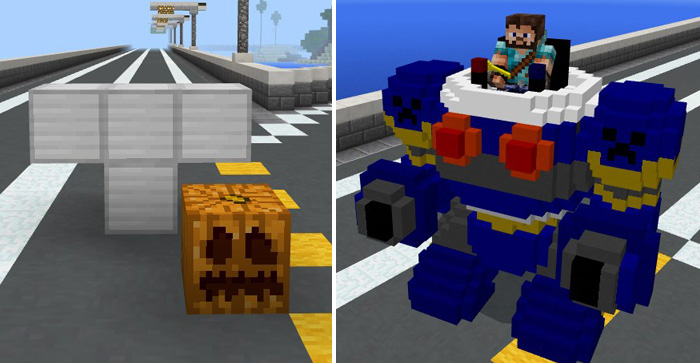 The robot automatically detects possible threats in the close proximity. It then has two different ways it deals with them. If the enemy is far away then it will occasionally shoot missiles. However, if the enemy is anywhere close to be seen it will use a powerful melee attack to eliminate the target.

RoboCraft has been designed to have the technical abilities to defeat most enemies but mostly so the Wither. According to the creator it should have the necessary power to kill two Wither bosses in one battle!