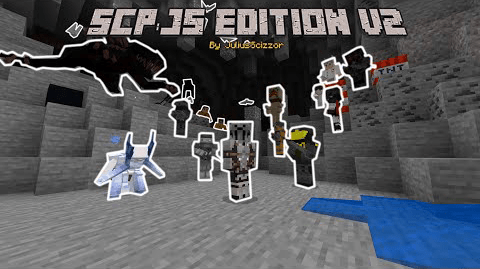 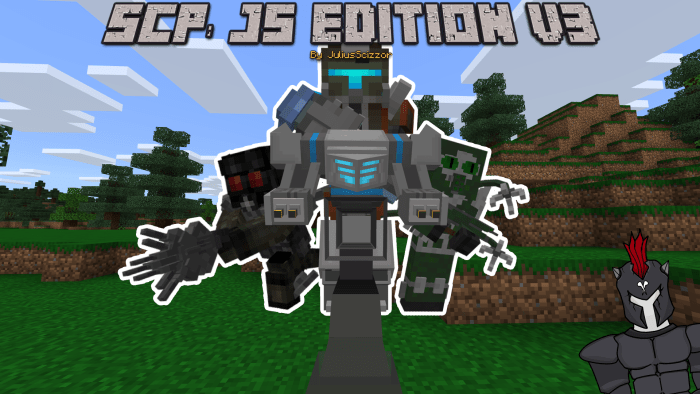 This add-on has reached it’s final update. There will be an “all features” world uploaded seperately soon

The O5s have given you tasks for you to prove yourself worthy of ?^%*?!

Gather resources. Fight SCPs. Show them your power.
You can find SCP Essence Ore at below y=16, mine it to get SCP Essence or Anomalous Fragments.

You need anomalous fragments and severed hands (from killing people’s corpses) to make a Serpent’s Hand Boss Spawn Egg. Defeat him to make him your ally, you will be awarded with the Serpent’s Hand Anomalous Generator (SHAG)

With the SHAG, you can trade SCP Essences for SCP Spawn Eggs or Anomalous Fragments for powerful armour/weapons. You can now get the SCP-4335 spawn egg. Defeat him for a lot of anomalous fragments and SCP Essences! You can also fight SCP-3000 for some Y-909.

After that you need to trade with the Serpent’s Hand for their warper in order to fight the Chaos Insurgency Leader. Defeating him will allow you to obtain an Unstable YBOD-Device

Next, you will need to find SCP-4375-1, located in the SCP-4375 forest. The GOC will probably surprise attack you there. You will get Scranton Reality Anchors after defeating them to stabilize your YBOD-Device, which will let you stabilize and control SCP-4375-1. After that you can use it to your advantage.

After finishing all objectives, you can trade with a site director for some cool stuff :D:D:D:D

Here are some links for your reference before you spam my MCPEDL, discord, twitter, and youtube comments!

I would like to thank the following people for their massive contribution to this add-on! 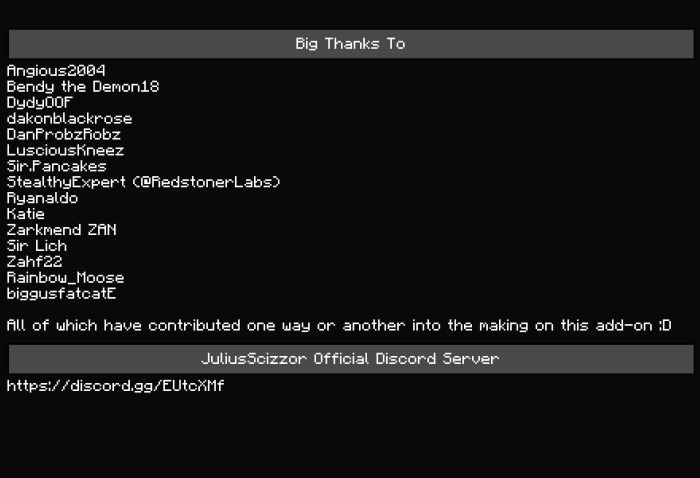 Some help with code & Assets from Bendy the Demon18

Thank you Bendy the Demon18!

MACHINE_BUILDER’s Feature Rule Generator (removed in 3.1 but i forgot to credit)

Everything contained within this add-on is based on the SCP Foundation and copyrighted under the Creative Commons Attribution ShareAlike 3.0 (CC BY-SA 3.0) license:

Therefore, this add-on is also released under the same license.
If you used any of my content (maps, add-ons, etc.), you must credit me. Show us creators some respect please. You can credit me by either linking to my MCPEDL add-on link, by linking to my YouTube
channel, or both:
> https://youtube.com/c/JuliusScizzor 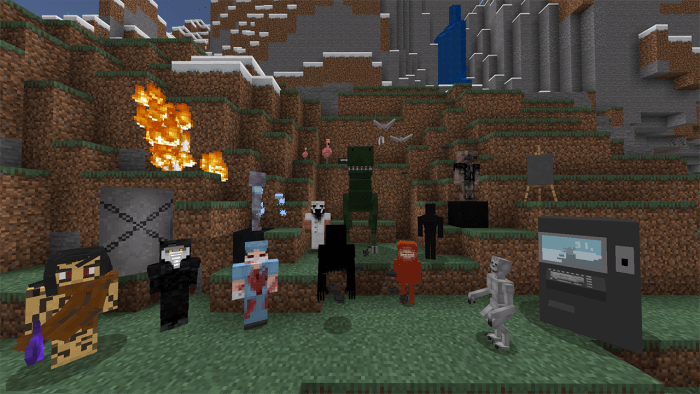 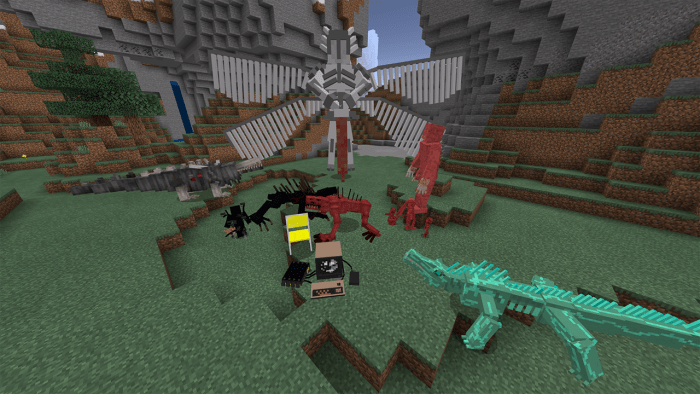 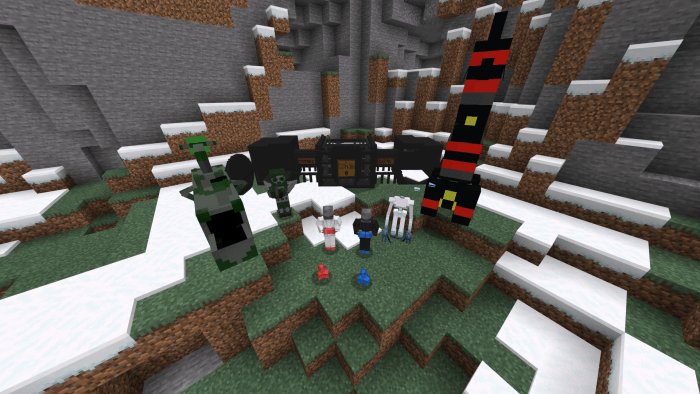 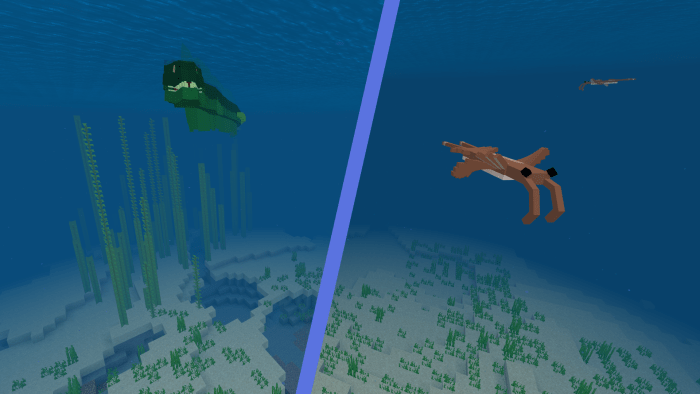 SCP-001: Gate Guardian: Annihilates everything within a 6 block radius

SCP-079: Randomly opens doors within 256 blocks, turn off by summoning it like this:

SCP-280: NO, NOT LIGHT, bfjaahhaaixhebhaah

SCP-294: “I love glitching through walls in facilities”

SCP-682: YOU DIRTY INSECTS, I WILL CRUSH YOU

SCP-914: You can’t refine dbois with it, unfortunately

SCP-4335 (Boss): Break me out of this prison, children, hasten the cycle, further

SCP-UA365: “Time is already running out”

(SCP-420-JS IS NOT WHAT YOU THINK IT IS, BE VERY CAREFUL AND THINK TWICE BEFORE HOLDING IT)

There are also a lot of custom items added to the game. Guns are an example. You can trade for ammo and it is used in crafting to reload guns. There are 3D models for the P-90 and AWM. For these 2 guns, you can hold a firework in your offhand, press & hold/right click & hold to reload your gun. Crafting works too

Mine deployer: 5 bullets, you can place mines down. The particles mark where it will end up. Reload using fireworks in off-hand like the 3D Model guns

It is recommended to fight the bosses with full diamond gear and golden apples. Guns give a huge advantage. The difficulty levels stated here are for survival mode, no enchanted golden apples and no enchanted tools.
Both boss battles have EPIC music

After defeating the SHB, it will kneel before you and become your Ally. You will be granted the Serpent’s Hand Anomalous Generator (SHAG) where you can trade SCP Essence (from SCP Essence Ore) for their respective spawn eggs

3 Stages. 1st stage has melee attack & pulls up shield randomly, 2nd stage can tp, 3rd stage can do everything and summon chaos members

5 Stages, immune to damage when shields are up. Throw any item near it to make it grow. This takes 10-15 seconds, during this time you are able to do damage to SCP-4335.
SCP-4335 does not directly attack you until Stage 5, but in all stages it summons 2 endermen every 18 seconds.
At Stage 5, SCP-4335 no longer has a shield. Instead it drops down to act as a spike barrier, dealing damage to nearby enemies (making it hard for you to melee attack it)

Defeating SCP-4335 drops a lot of anomalous fragments and enough of 1 type ofSCP Essence to spawn at least 1 of said SCP.

After defeating it you can tame it as a pet 😀
Recommended gear: Riptide trident + water breathing

There are a lot of SCP Foundation related personnel, explore what you can do with them! Each have their own unique behaviors and animations! 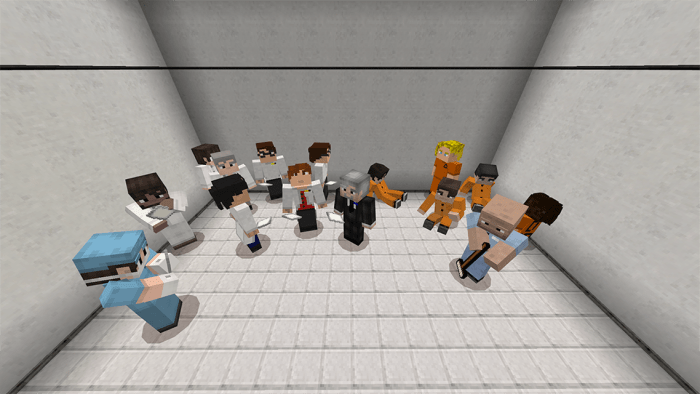 You can run any of these functions to join different groups of people:

There are many different machines in this add-on, doors, signs, computers, etc. You can play around with them or use them to build cool facilities! 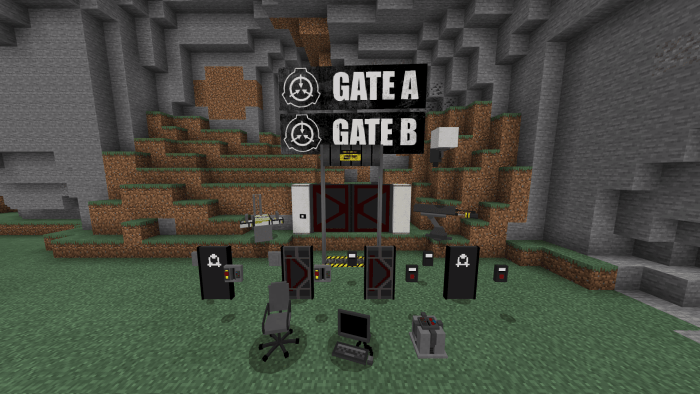 Here is a tutorial on how to use doors and rotate stuff (For Doors, Keycard Doors, Computers, Cameras)

– They can be crafted

– Hold the item to place the machine (Survival)

– Use the spawn egg like how you use spawn eggs (Creative)

– You can interact (right click / press and hold) with the bottom of the door to open / close it.

– Hold the builder item and interact (right click / press and hold) with the bottom of the door to change the level clearance of a keycard door. The different colours on the buttons represent each level. (1 – 5) – You can also punch buttons to open/close doors. – You can spawn in a button 2 blocks within the shadow (or bottom half) of a door / blast door. Punch the button to open / close the door.

– You can also punch buttons to open/close doors.

– You can spawn in a button 2 blocks within the shadow (or bottom half) of a door / blast door. Punch the button to open / close the door.

There are a ton of new custom SCP related blocks and many SCP labels for you to build amazing facilities with!

Do /function allblocks to get the blocks because it’s bedrock and 1.16 is b a d
You should do it in survival becoz there are ALOT more blocks than your inventory can hold

There have been A LOT more Pocket Dimension related blocks added in v3, download the add-on to explore them yourself! 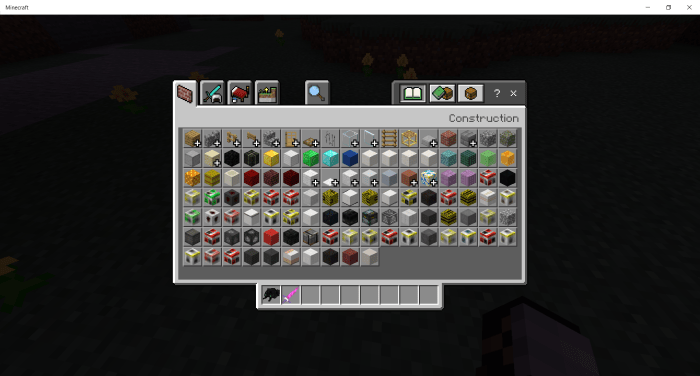 You can also explore naturally spawning SCP Facilities. Break SCP Facility blocks to spawn them in. However their doors are not 100% functional due to Minecraft limitations. But don’t worry, doors that you place down will work fine. 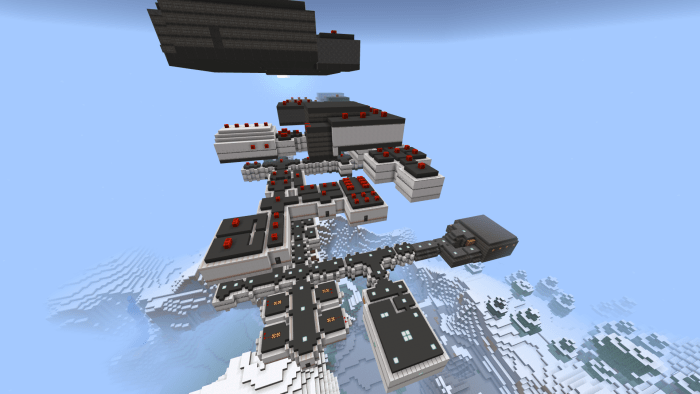 If you’ve read everything until here, thanks! I really appreciate it. Thank you all for your support throughout this add-on’s development. Without you guys I wouldn’t have made it here.

I know that majority of you don’t really care about me, but only care about my add-on / map releases. I hope you guys appreciate all the effort I put into
everything I make.

See you in my next projects! 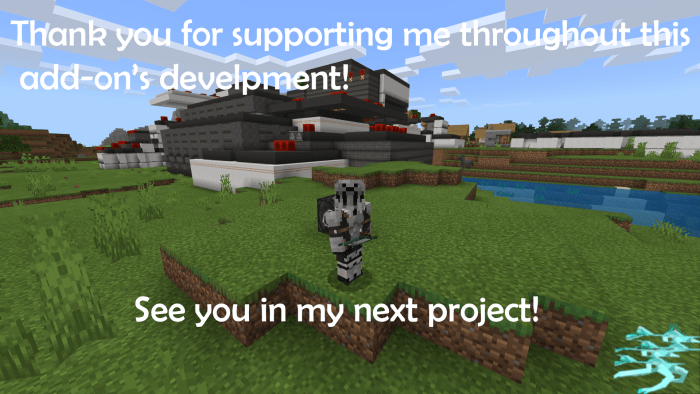 - Get ready for v4, it is my redemption, I will show everyone that i can make a good addon that does not crash your game

(there will be no more updates/bug fixes until 1.16 bug fix)

(there will be no more updates/bug fixes until 1.16 bug fix)

- Added Pocket Dimension: SCP-106 teleports you there if you went near one before

- MTF Unit Eta-10, See No Evil can now Recontain SCP-173-JS. Spawn a marker for them to bring the containment unit to

This update is just too cool man

- Add-On only lags if there are way too many entities. There is also a built-in lag clear only for bullets.

- Add-On only crashes if 2 buttons are trying to open/close a door at the same time, or just Minecraft bugs itself

- Updated a lot of models and animations

- Major door updates, the best door add-on in the world I hope

- YOU DO NOT NEED TO TYPE /function startaddon ANYMORE

- All optional features are turned on by default, except for pocket dimension

- Added Button (thx to Bendy the Demon18, it is another way of opening doors)
> Punch the button to open / close a door (button must be placed within 2 blocks on a door's shadow

Thanks to all those who took time to report bugs. Really appreciate it!

- Reduced chance of doors being in wrong position in SCP Facilities

- Added a little more loot to the SCP facility

You can refer to the following links as well:
> iOS
> Android
> Windows 10
> My video for iOS

1) Go to files app, navigate to downloads. You should see the name of the pack there.

2) Copy this file over to Documents by Readdle app

5) Now open it, press more and press copy to minecraft. It should work now

If it doesn't work, try extracting all the zip files directly into Minecraft. The folder location is:
games > com.mojang > resource_packs / behavior_packs