Welcome to GoldMC! This server has a bunch of games like a minigame server would have. It currently has 6 minigames. You may learn them in the future! The world is a Halloween themed world. It has a lot of nice features! We also themed the games as Halloween. The games are really fun! So we hope you enjoy. 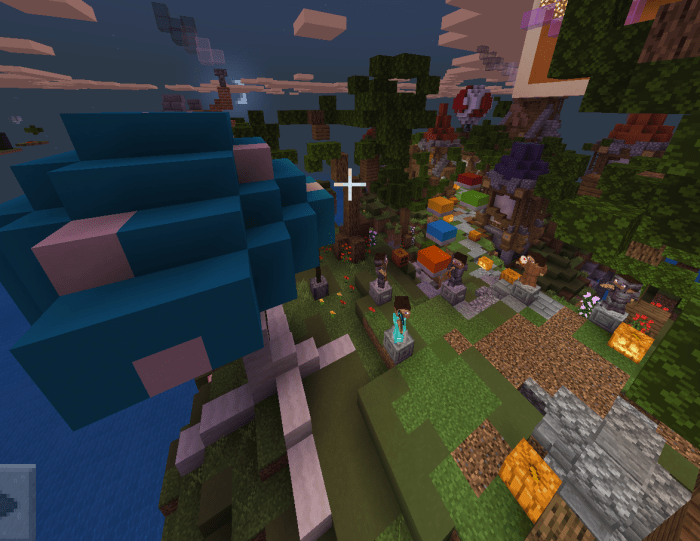 So the GoldMC server is most of the time offline. However sometimes it’s online. So people can join. It will be online most of the time when there are a bunch of players. To tell if it’s online just check if it says something other than “Server – v.0.0.0”. A list of games include:

Info about games: (If you already know then it’s ok)

There are 4 or 8 islands depending on what mode you are. There is also a a cake and a generator. Your goal is to protect your cake and destroy others. The gold and iron from the generators and diamond and Netherite gens can be used to buy utilities, blocks, weapons and armour.

So if you are a duels player you may know a mode called sumo. The mode is basically to knock off your opponent from a small platform. That last team/person standing wins.

Now this GAMEMODE you may have never heard of before but it’s basically CakeWars but there are kits and a villager to protect. The villager grants you powers everytime you buy an upgrade. Your goal again is to protect your villager and kill others. Like always, buy stuff using Netherite, diamond, gold and iron from the gens.

now you may have heard of those skyblock maps and videos. However skyblock is on ours and many other servers. You spawn in a lobby which also shows your stats and how much Coins you collected. Coins are ways to upgrade and buy keys to open crates which give you items .

Murder mystery is basically a game where there are 10 players. 8 of them are innocents which can eventually collect gold ingots. There is a detective who should try and find and stop the murderer. And finally there is a murderer. The murderer tries to stop every player including the detective. If the innocents collect 10 gold they receive a 1 shot bow. However don’t shoot other innocents otherwise you may get eliminated.

Now you heard of the movie known as the hunger games right? Well in Minecraft there is a version 2 known as Survival Games. In survival games there is a grace period for 30 or 20 seconds where you need to loot chests. Your goal is to survive and kill everyone to win. The chests have useful items.

anyways if you wanna join just copy and paste the IP and port in the top. Paste in the add server menu.

NOTE: This server is WIP. So I will work on it to make it better ok? Now have a good time. The server will be complete maybe in 2021 where it gets popular but idk because it isn’t THAT bad.

Holiday Note: I am working on a Christmas lobby. Preps will be done

Quick note that the server is changing.

Lobby update [CHRISTMAS THEMED!!!] So please wait. I will be working on that.

Updated to normal lobby. Since Halloween is over. A new lobby may be made.