This addon lets you experience the city of Bikini Bottom and meet SpongeBob and all of his friends. SpongeBob SquarePants is an animated TV show which has been on air for almost two decades. A total of 13 mobs have been turned into characters which look incredibly similar to those of the SpongeBob universe.

This addon changes 13 mobs into characters of the SpongeBob SquarePants animated TV show. And expectedly most of them are friendly.

To really maximize the fun we recommend you to download the Bikini Bottom map and then use this addon for that world. Bikini Bottom is the fictional underwater city where the SpongeBob universe exists.

Squidward Tentacles (replaces: witches): Squidward is a bitter octopus and a neighbour of Patrick Star and SpongeBob.

Sandy Cheeks (replaces husks): Sandy is squirrel scientist who lives in an aquarium and is one of SpongeBob’s closest friends.

Patrick Star (replaces creepers) (friendly): Patrick is the best friend of SpongeBob. He’s known for being ignorant but at the same time quite hilarious.

Mr Krabs (replaces skeletons) (friendly): He is the owner of the Krusty Krab restaurant and is especially known for being greedy.

Larry the Lobster (replaces iron golems) (neutral): Larry works as a lifeguard and at the Goo Lagoon beach.

Gary (replaces wolves) (neutral): Gary is a snail owned as a pet by SpongeBob.

You can tame these mobs by feeding it bones. Bones have been retextured to fish food. 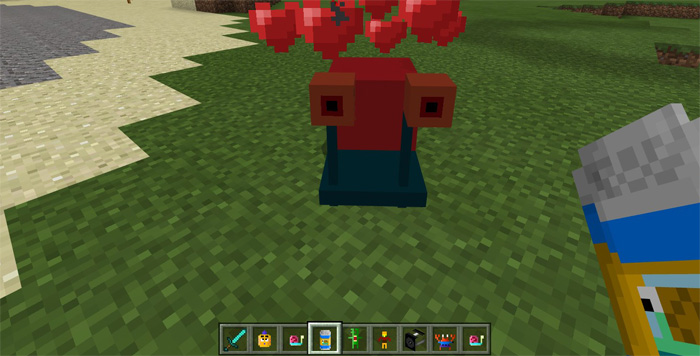 Plankton (replaces zombies) (hostile):  Plankton is the owner of the restaurant called the Chum Bucket. If he’s killed he drops dollar bills (bricks).

Jellyfish (replaces ghasts) (friendly): You have to keep in mind that Bikini Bottom (where these characters live) is an underwater city. Spawn some ghasts and pretend that they are jellyfish in water.

The Flying Dutchman (replaces the wither boss) (hostile): This is the green ghost pirate which sometimes appears in the TV show.

Boat (replaces cows): You can control the boat by holding a carrot on a stick in your hand.

You can download a .ZIP file for this addon here.