The Star Wars Add-on adds three droids (with custom sounds), a Jedi robe, lightsabers and a couple of other items to Minecraft Pocket Edition. R2-D2 and BB-8 are two of the droids which you will be able to tame and keep as loyal companions on your next adventures. But be careful. There are evil droids out there which have been programmed to kill you and your droid friends. This add-on is a must-play for anyone who like the Star Wars movies!

R2-D2 (replaces spider) is a small astromech droid with a few different utilities. Its main and most effective ability is to protect its owner from aggressors by shooting lasers at them. It also has a storage container (5 slots) which the player can use for storing blocks and items.

The droid is neutral by default and you can tame it with some redstone.

As soon as it is tamed it will follow you around.

A tamed droid is on a constant lookout for possible threats. That includes everything from monsters to hostile droids.

C2-B5 (cave spider) is an astromech droid which serves the Galactic Empire. It is hostile towards players and will attack them on sight by shooting laser.

They are also hostile toward other droids (e.g. R2-D2 and BB-8). Spawn a bunch of them and watch them fight it out.

BB-8 (replaces creeper) is an absolutely adorable droid which by default avoids players. But it’s easy to lure it with some redstone which you can then use to tame it.

Once tamed it will follow you and protect you against possible threats.

Throw some items at the droid and it will store them for you. 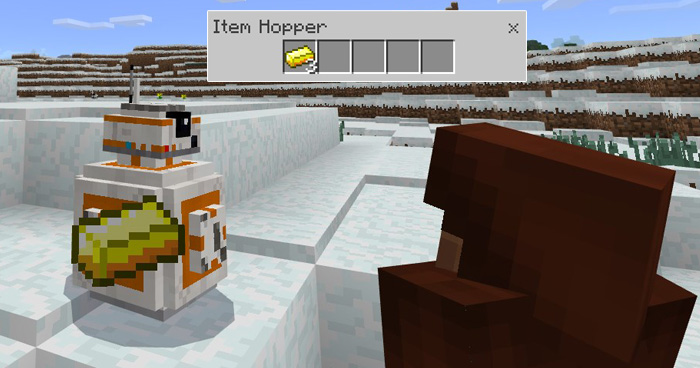 An AT-AT (short for All Terrain Armored Transport) (replaces pigs) is a huge vehicle used by the ground forces of the Galactic Empire. It requires a great amount of strategy to take this beast down.

There’s a pilot seated inside the neck of the vehicle which you should shoot down first. It’s only then that it will stop shooting blasters. However, it will continue to shoot fireballs and once in a while some Stormtroopers will storm out from underneath it and assist it in the attack. 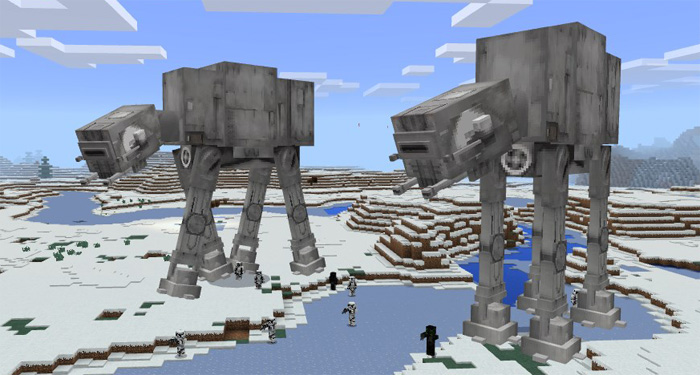 The Stormtroopers are the assault troops of the Galactic Empire. They’re equipped with an E-11 blaster rifle which they will use to fight off the enemy (players included).

The Rebel Soldiers are part of the Rebel Allience (which I guess you could say is the good side).  They are naturally afraid of the Galactic Empire and will run away if given the chance. However, they are neutral toward players and that means it’s up to you to help them to bring some justice to this world.

You can give a rebel soldier a blaster (bow) to hire him and make him work for you!

The Death Troopers are an elite force of the Galactic Empire. They are quite similar to a Stormtrooper except that they have few additional abilities which include a longer attack range, more health and faster shooting abilities.

The armor suits include a Stormtrooper armor, Rebel armor, a Jedi Robe and a Death Trooper armor. There are also a bunch of different lightsabers. All weapons (except for the bow) still cause the same amount of damage. (There is currently no way to change that for add-ons.)

The E-11 blaster rifle is a rifle usually carried by stormtroopers. It shoots laser (arrows).