The Journey of Life [Adventure]

This beautiful adventure starts you off at your treehouse and leads you through a series of quests which you need your completion. The ultimate goal is to obtain a potion of immortality and be paid enough money to be able to finally build a rooftop pool for your treehouse. It can be played by anywhere between 1 to 9 players and the map is solely an adventure and exploration map so don’t expect any battles or player vs. player instances.

You’ve been living in a treehouse for your entire life. You like it up there. It’s really close to the marketplace (also known as the mine) and the lake. You really love your treehouse but there is just one thing missing and that’s a rooftop pool. But there’s a problem, they don’t come cheap! Five years, yeah, that’s for how long you’ve spent working to save up for this pool but yet you are still nowhere close to having enough money.

One day when you are out on a stroll an old man stops you. He says that you look like a brave and adventurous human-being and offers to pay you good money in exchange for a potion of immortality which you need to find for him. How much money? Well, it’s more than enough to pay for the rooftop pool. You accept the challenge and you begin your journey! 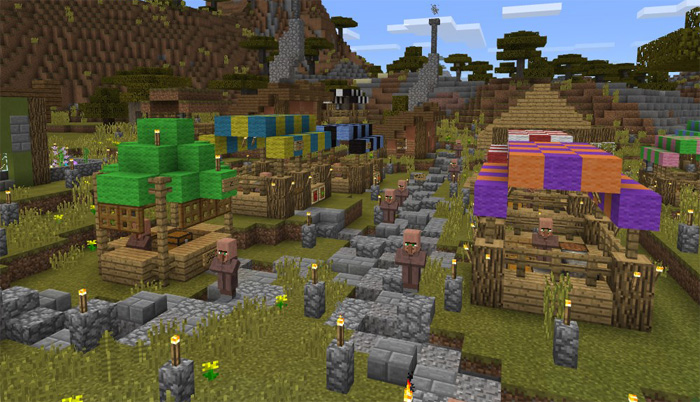 Included in the world are two shader packs. However, none of them are required. You can disable the packs by editing the world settings.