In this map you will be able to explore a twilight forest which is the home to many strange creatures and also a completely redesigned Nether with twilight monsters. There are tons of new things to explore (mostly textures though) and we highly recommend you to download it yourself to fully immerse yourself in this crazy experiment!

This map and addon was mostly created as a concept or an idea for a new type of dimension in Minecraft PE. But it should be noted that the majority of textures and models originates from a popular mod for PC called The Twilight Forest.

What have been replaced?

In and around the twilight forest you will find lots of strange mobs. Let’s have a brief look at them.

The cows and mooshrooms have got a new set of horns.

Bats have been replaced by beautiful butterflies.

Getting chased by a tree, that gotta be a first time! Iron golems look like the Ents from The Lord of the Rings. They will not move unless they are attacked. 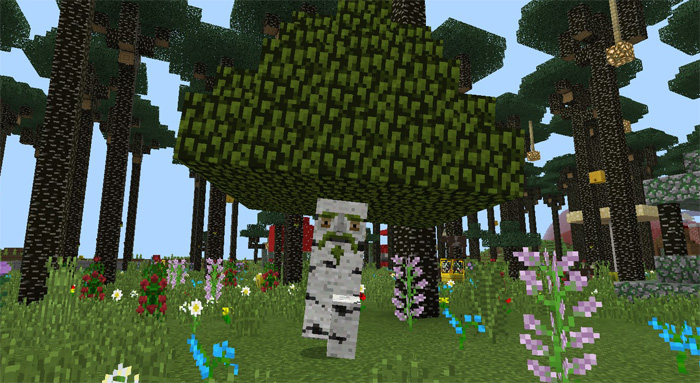 Wolves have been replaced by bears. They are supposed to be able to be tamed with fish but I couldn’t get it to work.

This is what the portal looks like which you need to enter to get to the Twilight Forest in the PC mod. If you enter through it in this map you will come to a strange version of the Nether with twilight mobs.

Here you can see some of the mobs appearing in this strange version of the Nether. 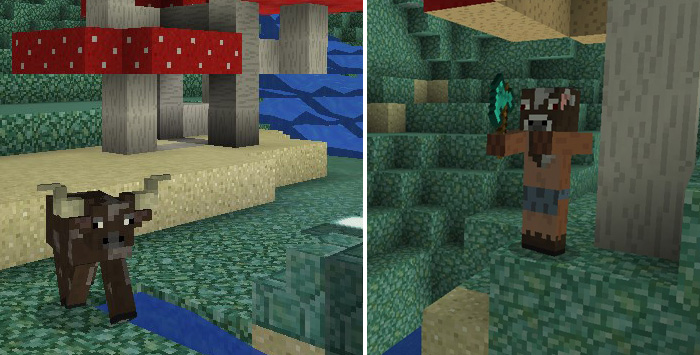 All of the wool blocks have been replaced by colored wood planks. However, it’s just the textures which have been replaced. The blocks will still have the same behaviors as wool (such as sound and time it takes to break it).

The nether reactor core have been replaced by a lucky block. Break it with a pickaxe and it will spawn a bunch of diamonds (which are actually iron ingots) and red emeralds (which are in fact diamonds).

The melon has been replaced by honeycombs.

Here you can see some other block textures which have been replaced. The purple ones are blocks found in the End but it’s actually quartz blocks.

There some more things which have been replaced but those I will let you explore by yourself!

This addon works only to download as a .McWorld file. It has a file size of more than 50 MB and as a result it can take a long time to download. But it all depends on the speed of your Internet connection.