With the amazing help testing and all the great ideas from my discord, this mod would not be what it is. I’m happy this mod has evolved from the original buggy mess of my first 5 versions and become something amazing!

This mod adds 3 new mobs(Archers, Guards, and Mages) to the game that will naturally spawn in and protect villages.

Does Not Need Experimental Gameplay

Mcpe master
Add-ons for minecraft
UTK.io
And in NO other add-ons app! It is unique to MCPEDl, disregarding this requirement can cause various problems.
It can NOT be published on other sites or create applications!
Always leave credits !!
ATTENTION! IF YOU ARE RECORDING SOME VIDEO, YOU HAVE NO AUTHORIZATION TO MAKE YOUR OWN DOWNLOAD LINK, USE THE AVAILABLE LINK, DISCORD, OR SHORT JUST THE ADDON OFFICIAL PAGE LINK ON MCPEDL!

This version is only available in my discord! If you go through linkvertise you are downloading an old version 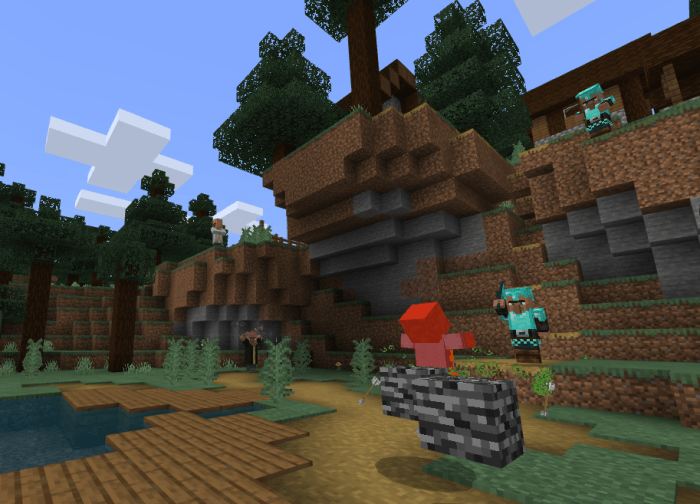 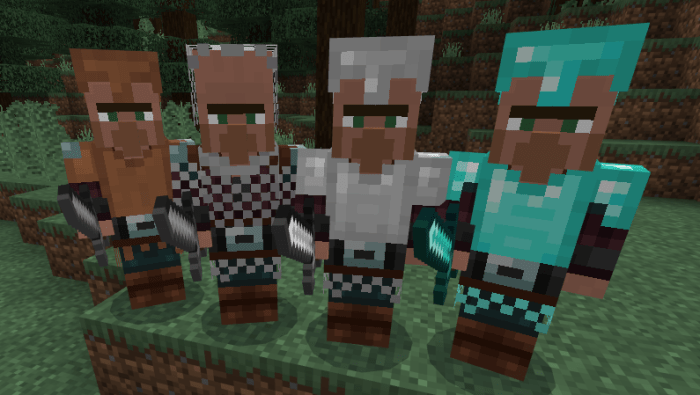 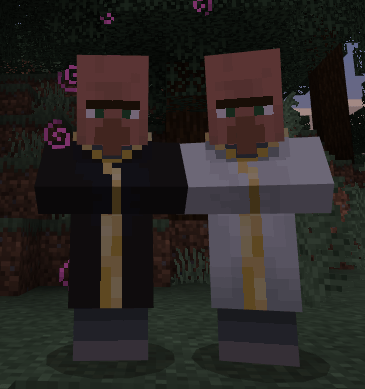 To change the movement mode interact with any of the Valhalla Guards Mobs while holding the listed item.

If a Valhalla Guard Mob is following you, you can use a paper, bell, clock, or campfire to “un-tame” them and set their movement mode.

●The mob will roam around randomly. They should stay near a village, but do tend to wander off.

●The mob will stay towards the center of the village. Will sometimes go towards the outskirts, but will always find their way back(if path is not blocked).

●The mob will stick to the outskirts of the village. Will patrol nicely on the outskirts and stay there, but can easily be outnumbered if alone.

●The mob will not move, cannot be knocked back, and cannot be pushed.

●The mob will become tamed and will follow you.

●The mob will path to a horse. The only way to demount is to kill them or the horse. They cannot mount a tamed horse. The horse will now do the path finding so the other movement modes will no longer work while mounted.

While holding a banner the Valhalla Guard Mob will follow you.

Each Valhalla Guard Mob has a 10% chance to spawn instead of a villager.

Only nitwits and unemployed can transform into guards.

When transforming from a Valhalla Guard Mob to a Villager you will not be able to transform them again until they claim a job and become unemployed again.

To transform the mob interact with any of the Valhalla Guards Mobs while holding the listed item.

Valhalla Guard Mobs each have different equipment available to them.

To change the equipment interact with any of the Valhalla Guards Mobs while holding the listed item.

Does not work with enchantments or effects unless otherwise stated.

The healer cast a Regeneration 1 on friendly targets that lasts 40 seconds.

The mage casts 2 spells. A group of vines that crawl through the ground towards their target and a launch a bedrock block at their target.

Fixed the you tube video so that it plays in the page.

Added a mod showcase video from youtube made by me

Updated permissions because old versions of my mod are being posted with out my permission and people are having problems with an unsupported version.

Completely remade from scratch because of many bugs and disappointments.

This is buggy join my discord to help me test the upcoming version. https://discord.gg/ECjHHZG

Updated F.A.Q's and made the display page's text more uniform

Complete overhaul of the guards.

No longer need to name guards for movement states.

Archers now flee from enemies instead of running to melee them.

I use linkvertise to support me and my mods. However, all of my Mediafire links are available in my discord.