Looking for a new Vampire and/or Werewolf Add-On? Maybe a new set of items? Or a greater challenge? Well today is your lucky day! I introduce to you my Vampire Add-On! 3 new entities and over 15 new items, each greater than the last!

To start your journey off, you are going to need a weapon. This new weapon is the Stake, this is how you craft it: 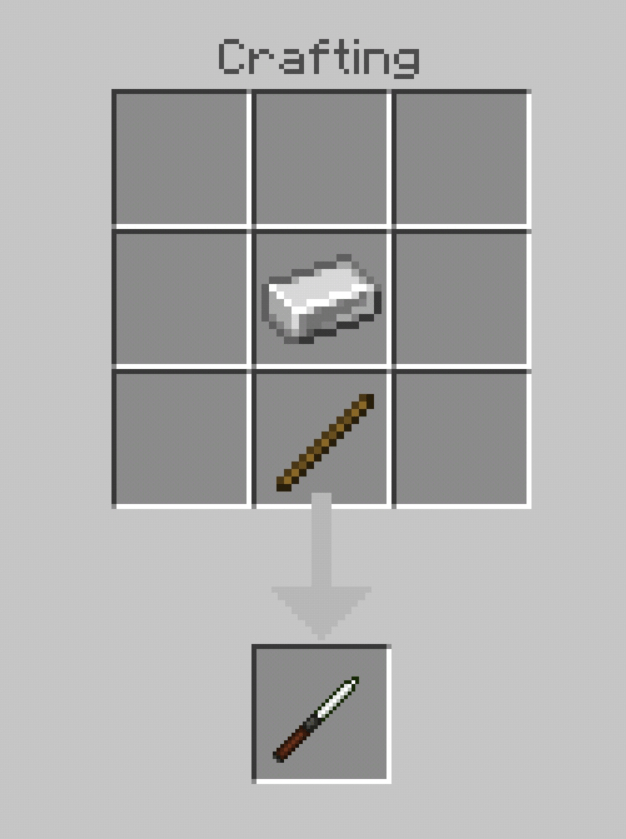 You will need 1 iron ingot and 1 stick. Place it in your crafting table like this and you will get a Stake.

With this stake, you can kill Vampires! 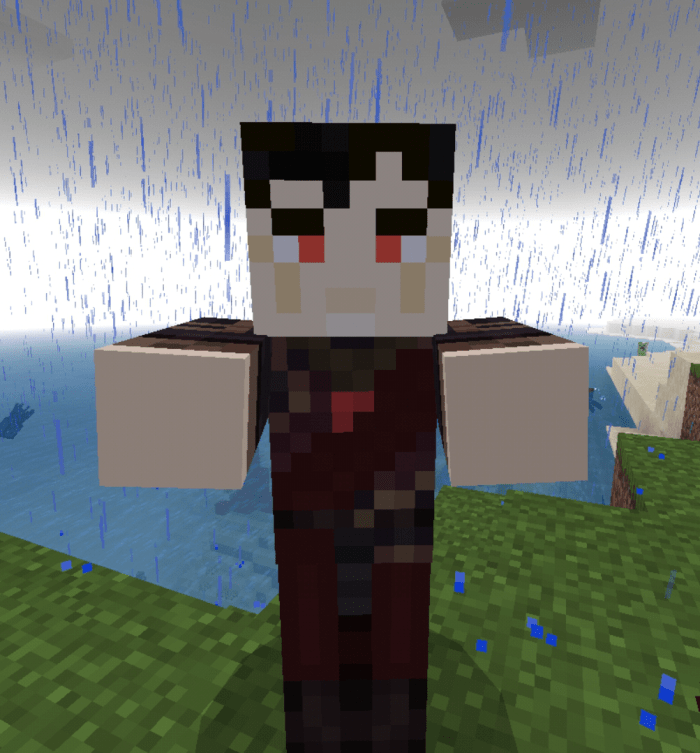 Vampires can be spawned in with its own Spawn Egg found in the Creative Menu and can be found roaming around in the night. At the moment there is only 2 variations, however that could change in the future! The Vampire attacks all Villager types, including the Player so be careful! With the Stake you can kill the Vampire quickly to avoid taking too much damage. He can sometimes spawn as a baby, which is even more dangerous!

Both Glass of Wine and Vampire Tooth can be used for crafting! 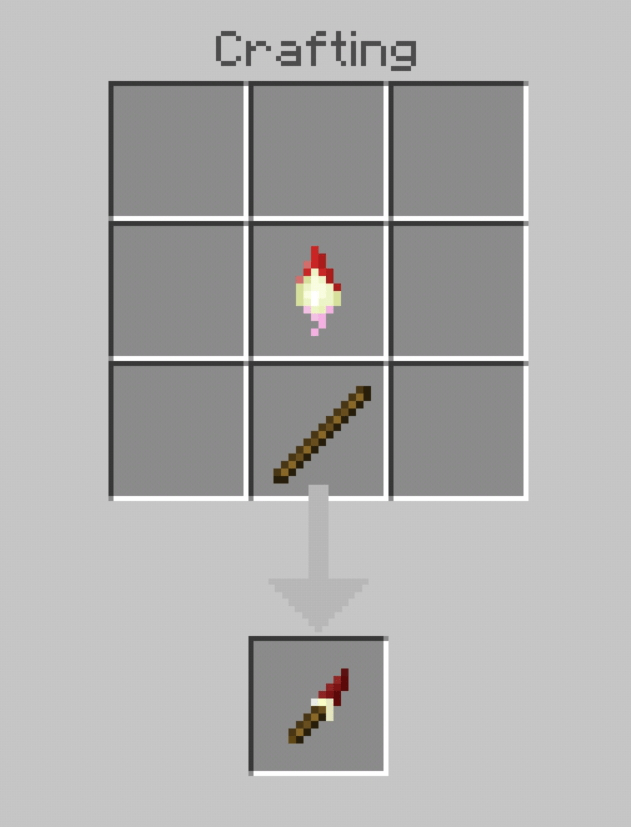 This is how you can craft a Vampire Dagger. The Dagger has 1 ability, mostly meant for quick attacks rather than big attacks. Here are some things to note: 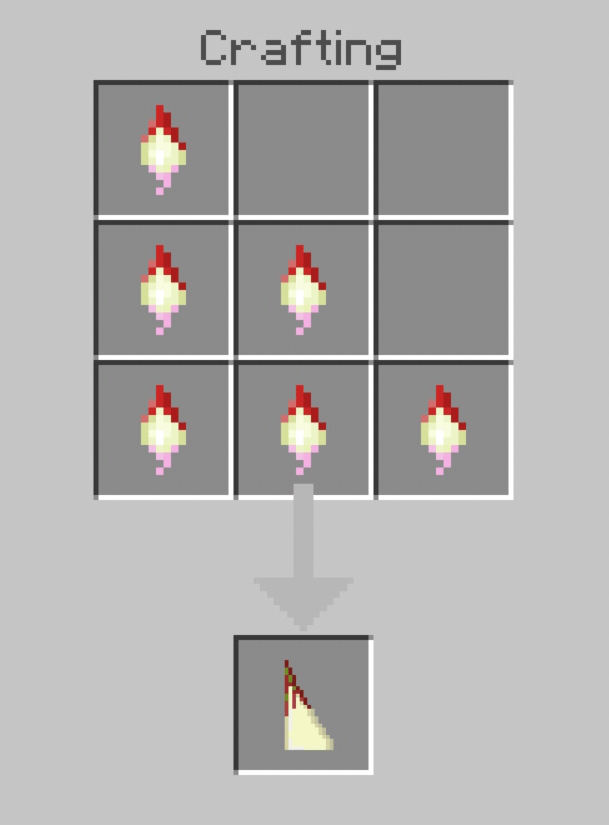 This is how you can craft a Bloody Tooth Blade. You require 6 Vampire Teeth to craft one of these. This is very important to have in order to craft the rest of the items ahead of this.

In order to cleanse the tooth from giving you a Poison Effect, you must drain the Poisonous blood into a Bucket! 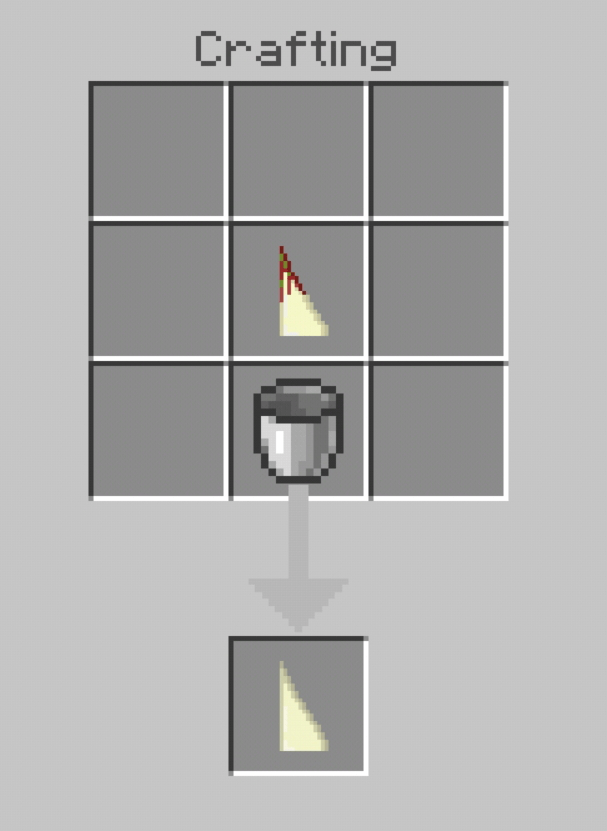 This is how you drain the blood from the Tooth Blade, you’ll need to place the Bucket in a Crafting Table. This will give you a new item and throw away the Bucket (since it has Poison in it), keep this clean tooth in your Inventory! You’ll need it for later 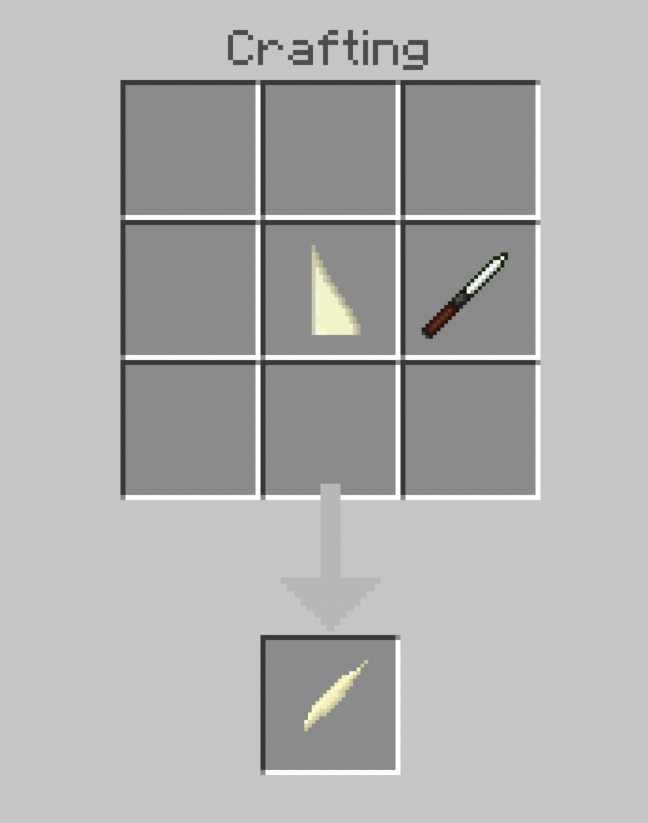 You’ll need your initial weapon to sharpen the Vampire Tooth into a cutting edge weapon! Although this takes away your Stake for a weapon that does less damage, you’ll need this new weapon for the next set of Crafting Recipes. 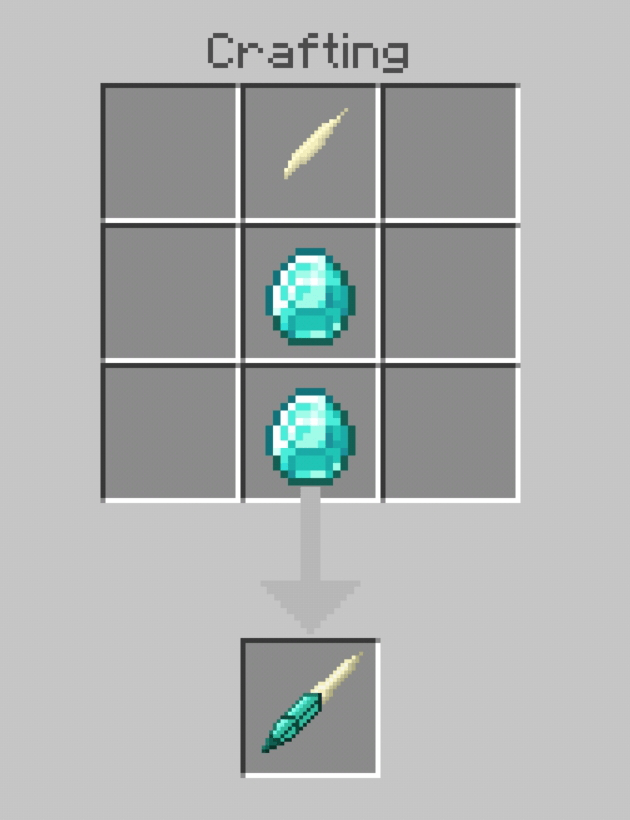 The Extended Tooth Blade is the final crafting recipe for the Vampire Tooth section. You’ll need 2 Diamonds and 1 Sharpened Tooth Blade to craft this weapon. 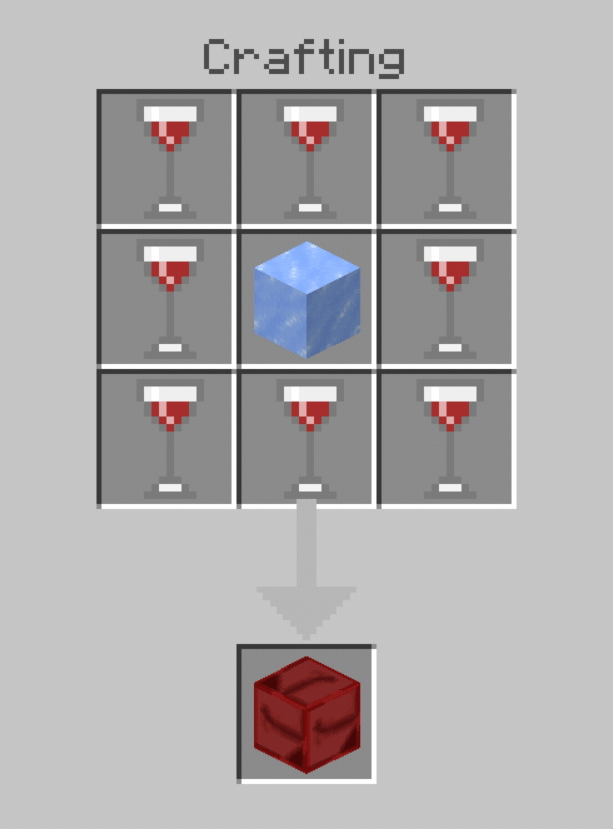 You will need 8 Glasses of Wine and 1 Ice in order to craft the Frozen Wine. When walked on, it will give you a sliding effect, like regular Ice Blocks. This block may not seem important, but you’ll be using it for the next crafting recipe which will be used in the making of a New Weapon! 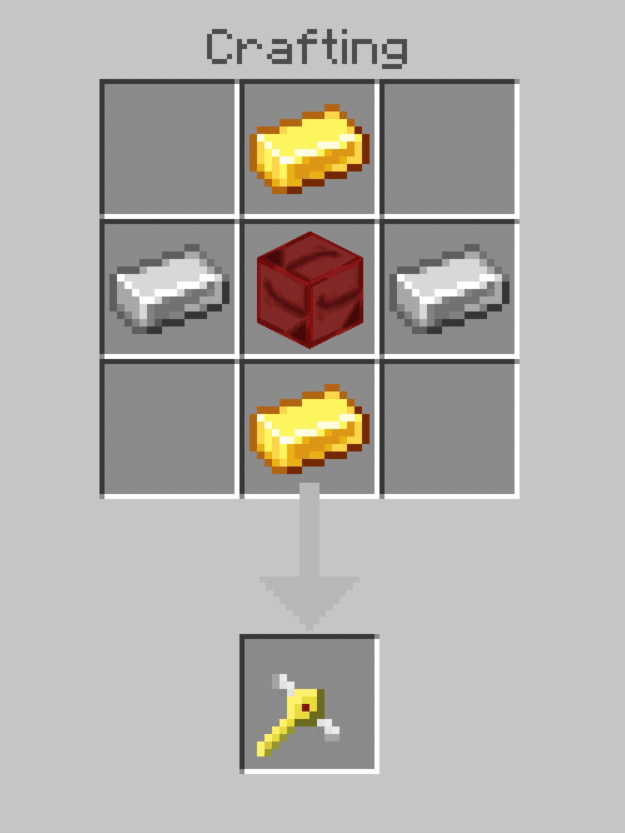 The Golden Hilt is crafted like this. It doesn’t do any damage because it is an Item, not a weapon (yet). Don’t ask me how it’s possible to fit Frozen Wine into a tiny little hilt!! 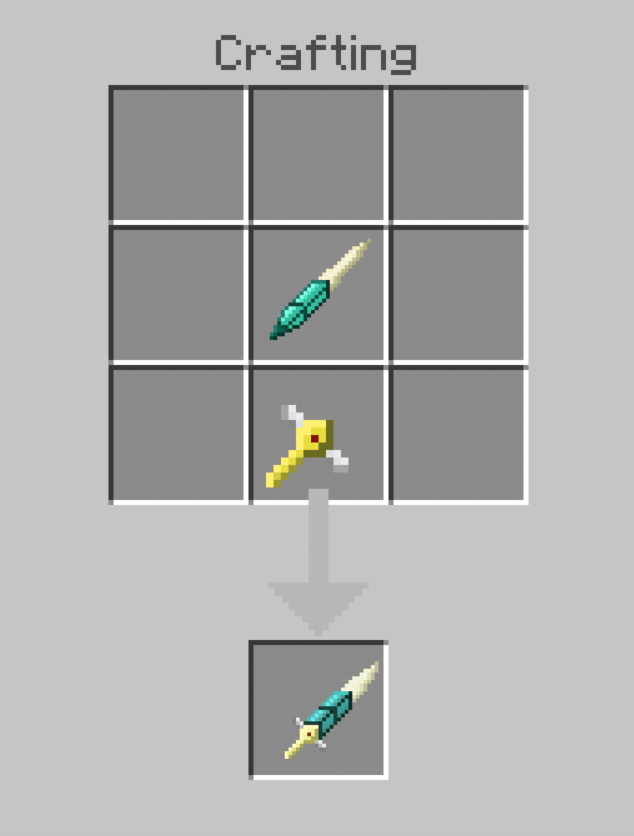 This is a small step up to building your ultimate weapon, The Vampire Broad Sword. According to my friend (and helper), you can place the materials anywhere in the crafting table and still craft the weapons and items! 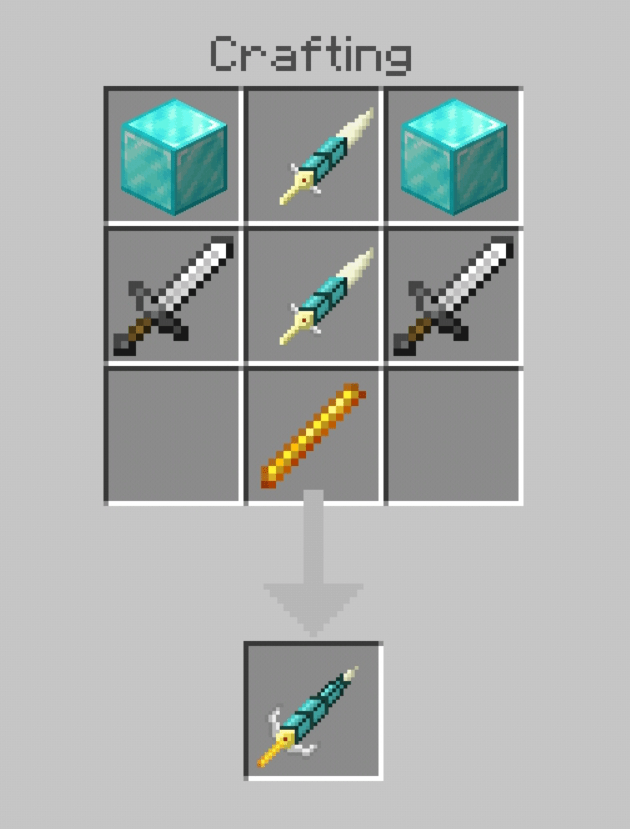 This… Is the Vampire Great Sword. You will need 2 Diamond Blocks, 2 Iron Swords, a Blaze Rod, and 2 Vampire Broad Swords!! There is no other way to craft this, so you’ll have to get to grinding in order to craft this sword. 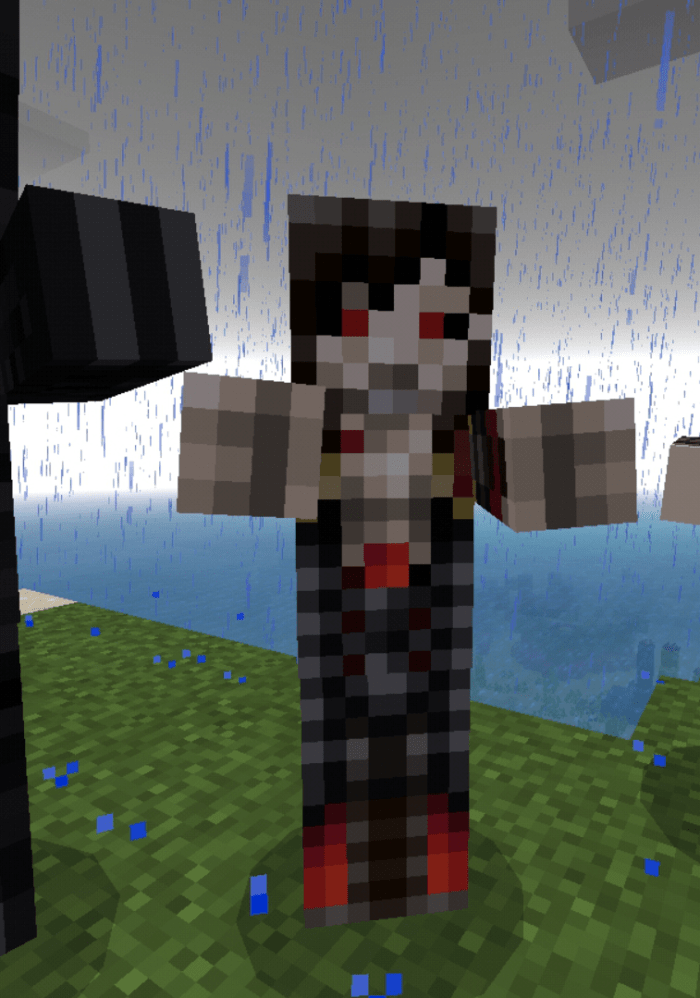 Dracula is a new Boss for your game! There are 2 main ways to spawn him:

He attacks Villagers and the Player on sight! So make sure you are well equipped before facing off against this guy! The following list are notes about this Boss 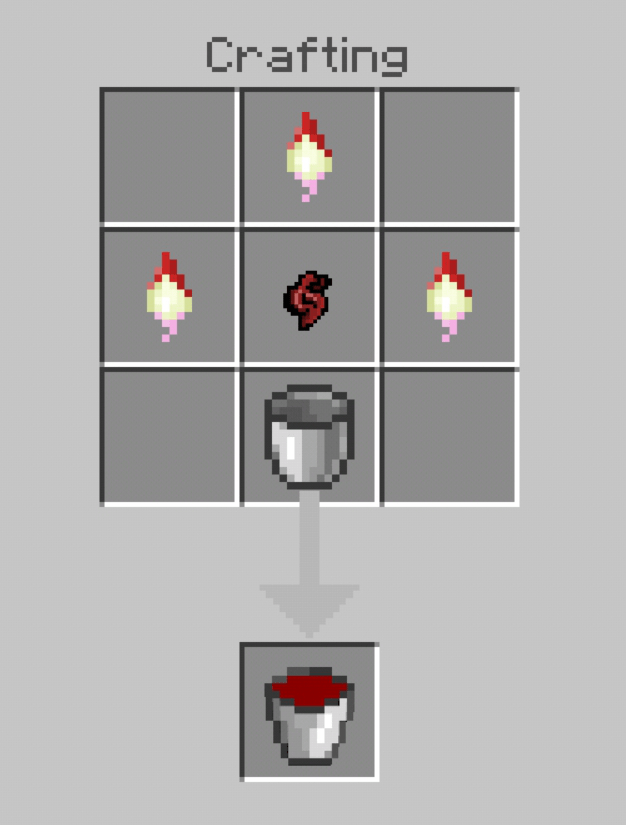 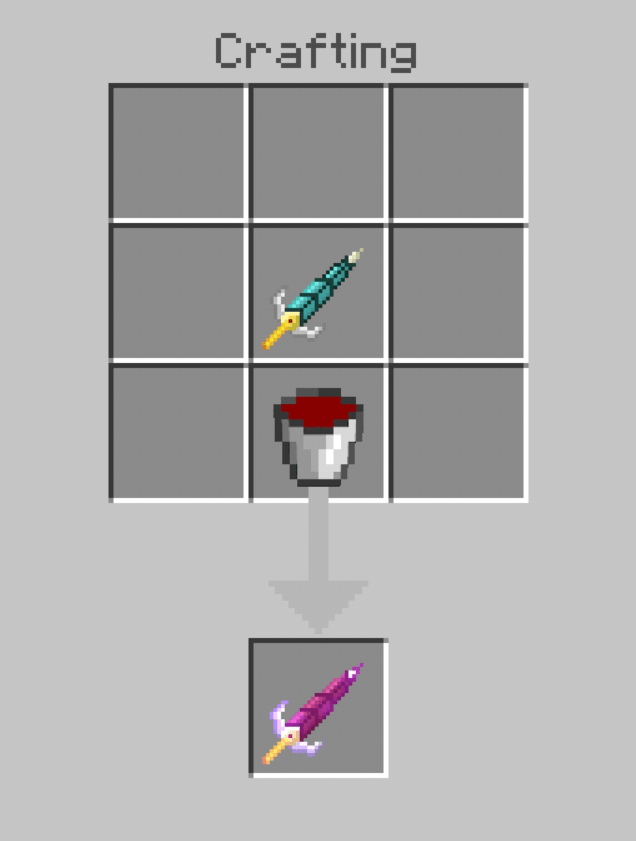 Dracula’s Great Sword is the ultimate weapon used by Dracula himself. As shown in the image above, this sword is glazed in the blood of the Vampires

If you crafted this before the Ultimate Sword, unfortunately you’ll have to craft a new Vampire Great Sword. Here’s how you can craft the next sword: 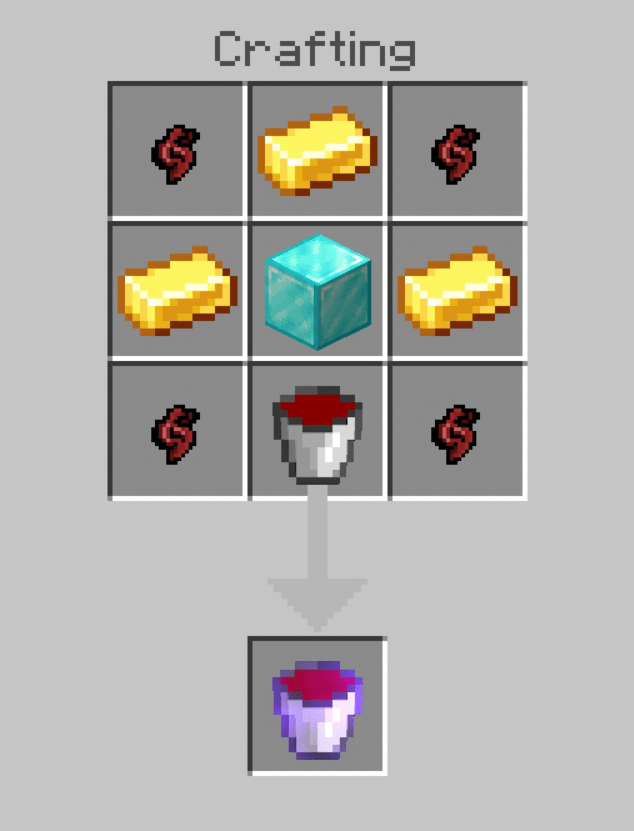 The Bucket o’ Purified Blood requires 4 Hearts of Dracula, 3 Gold and 1 Diamond Block. This new Item will be used to craft the final, and ultimate Great Sword 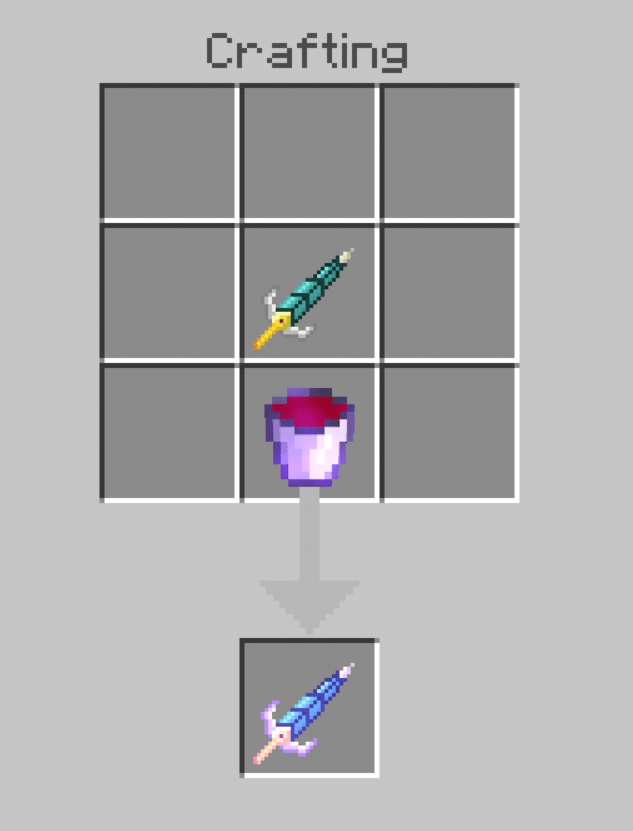 Congratulations, you have crafted the Vampire Killer’s Sword. This sword has a couple of abilities and also has an Enchantment Effect. 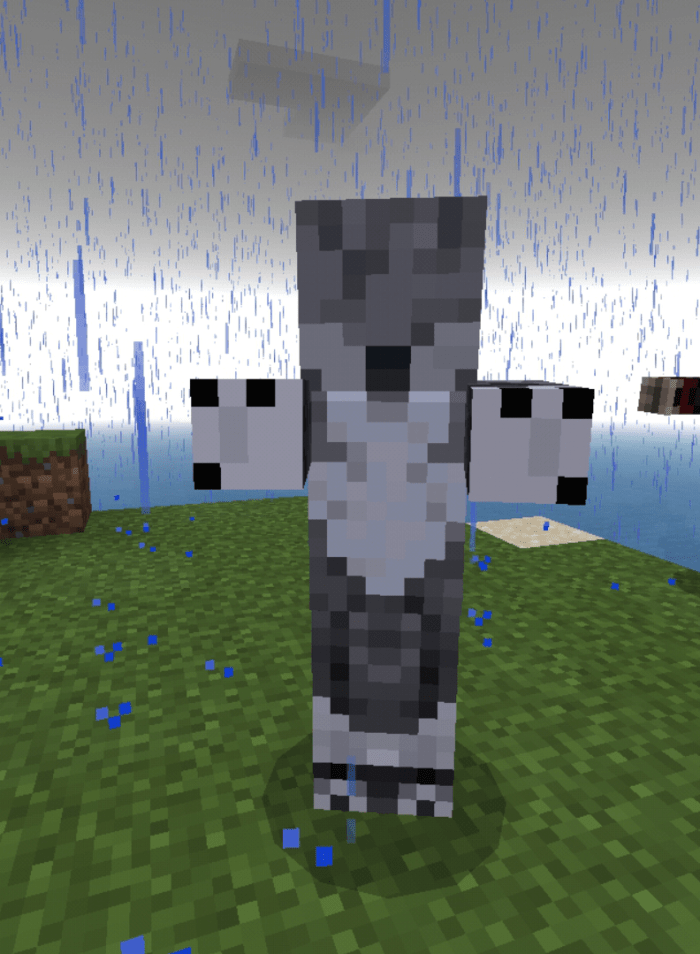 When lightning strikes Dracula, he will transform into this Werewolf!! You say you almost beat Dracula when all of a sudden he transformed?? Sounds like a greater challenge to me! He is supposed to look like a Werewolf, however his face texture is a little complicated to get correct… You can also spawn him in via Spawn Egg along side the other 2 previous mob eggs. 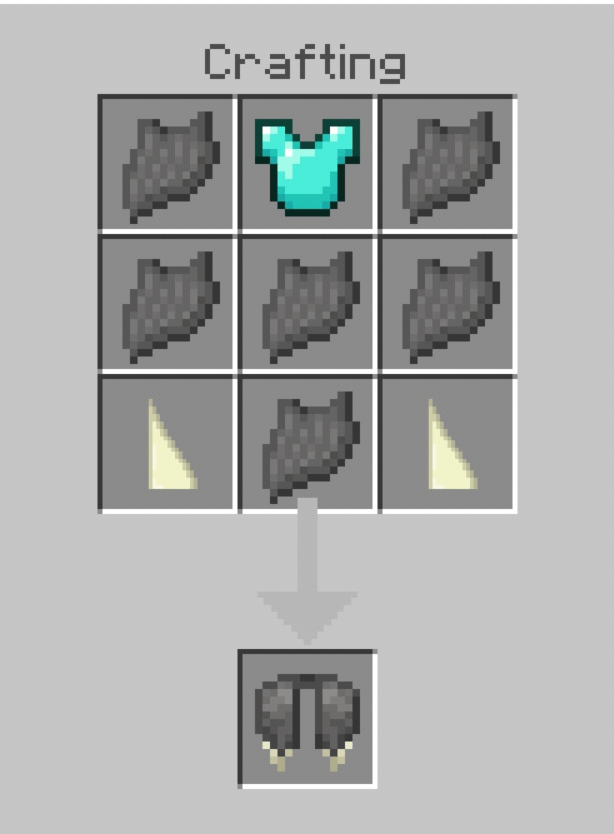 The Elytra is now Craftable! You can craft it with 6 Wolf Skin, 2 Vampire Tooth Blades and a Diamond Chestplate. The Elytra has a custom skin in the inventory and when equiped 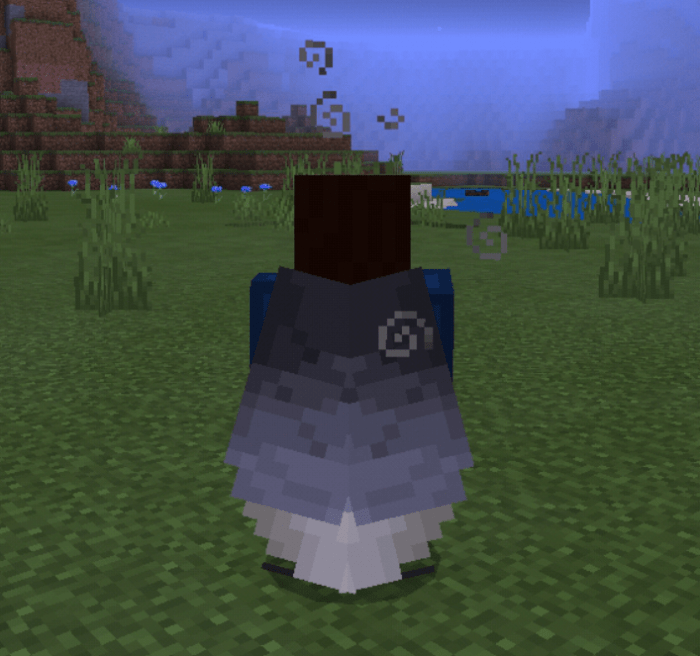 *It doesn’t give any boosts. The particle effects shown on screen are from Dracula’s Great Sword 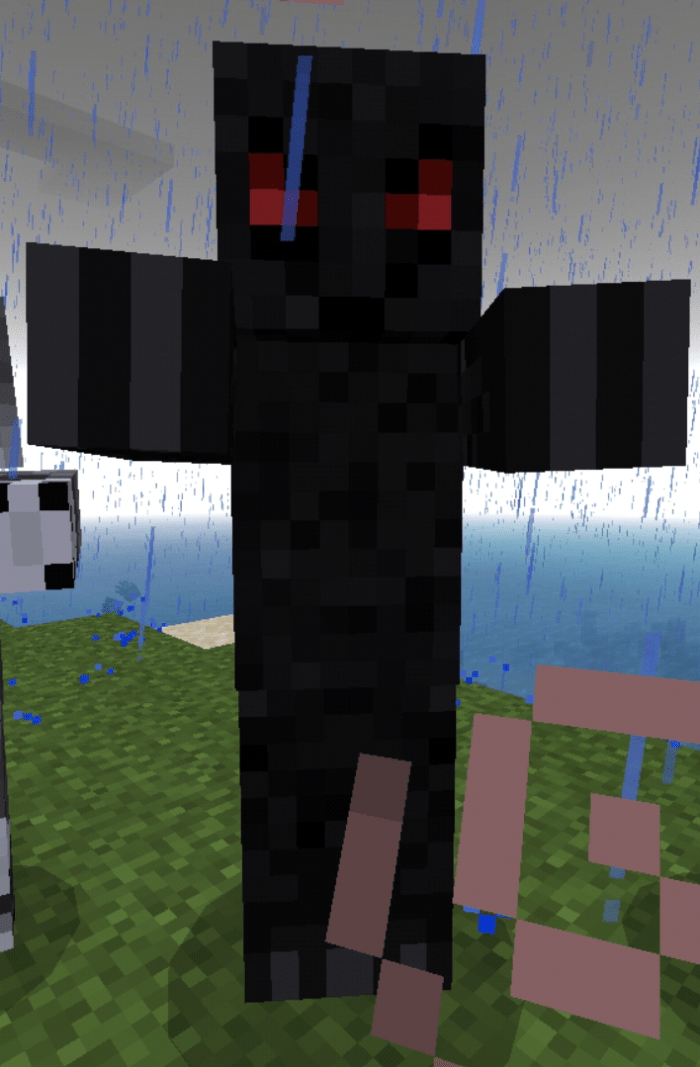 The werewolf is much bigger and stronger than the ordinary player, and much faster! They burn in the daylight just like most of the previous mobs. They spawn naturally in the night time or in really dark areas 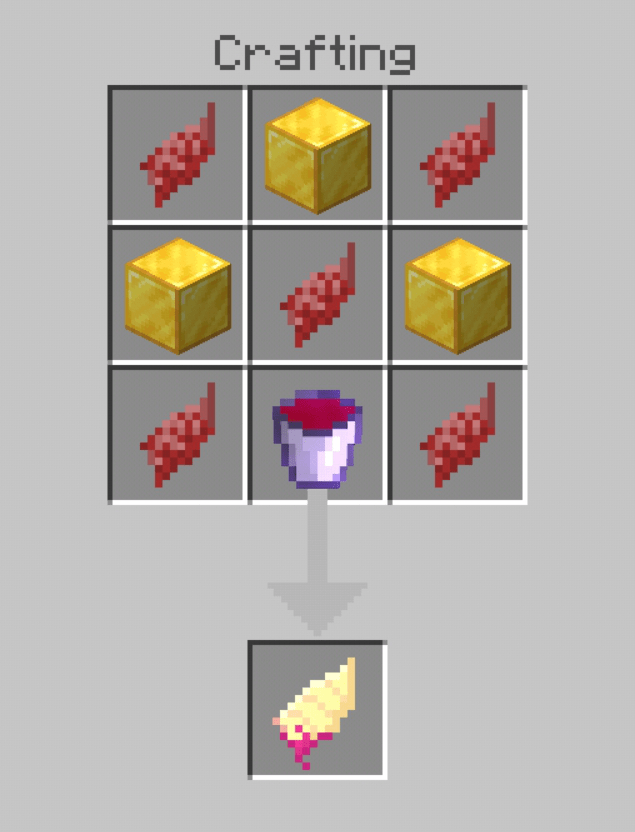 This new food is quite expensive, as well as this new update. You are required to kill Dracula a couple of times to craft this new food, Glazered Wolf Meat. The meat gives you a handful of great abilities, and it’s quite tasty! 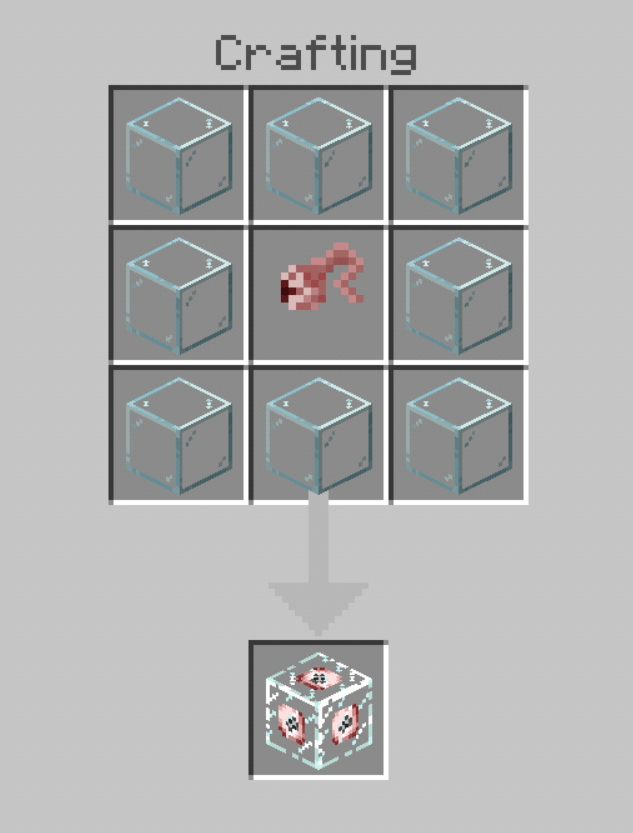 The eye itself isn’t so nutritious… However surrounding the eye with glass will allow you to craft a new block which can be used for the crafting of a new weapon! 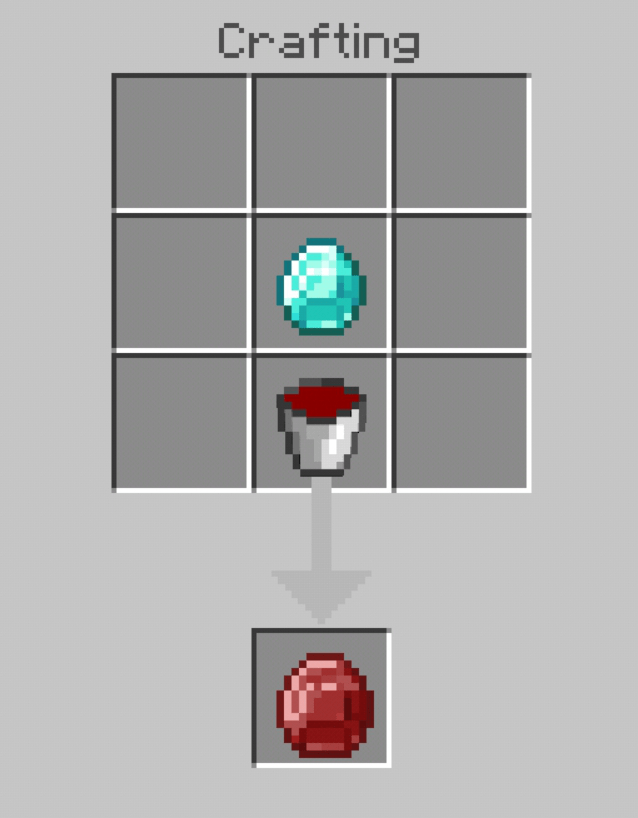 You’ll be needing plenty of Diamonds and Buckets o’ Blood for these Blood Diamonds. Not for this recipe, but for the next set of items! 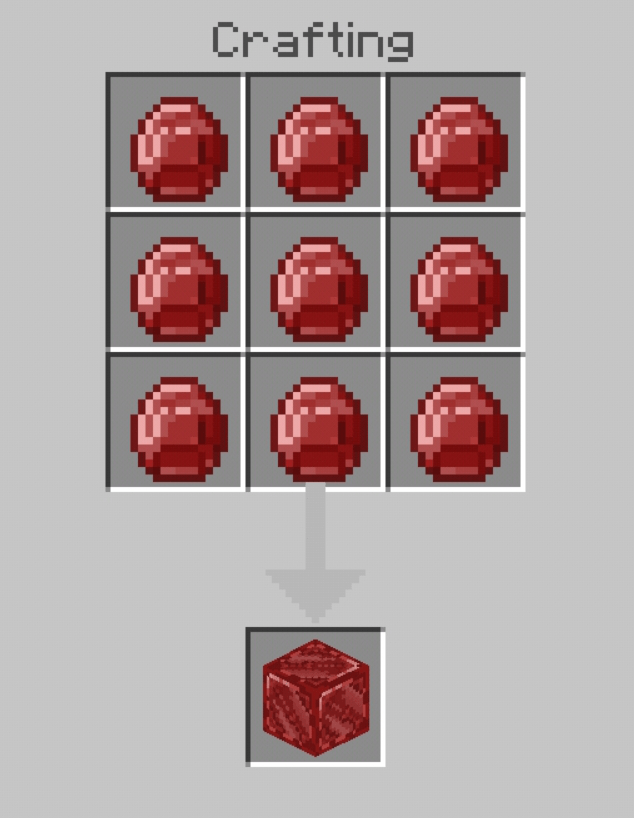 Just like a regular Jewel type material, the Blood Diamond can be crafted into a Block. You’ll be needing 8 of these blocks for the next recipe 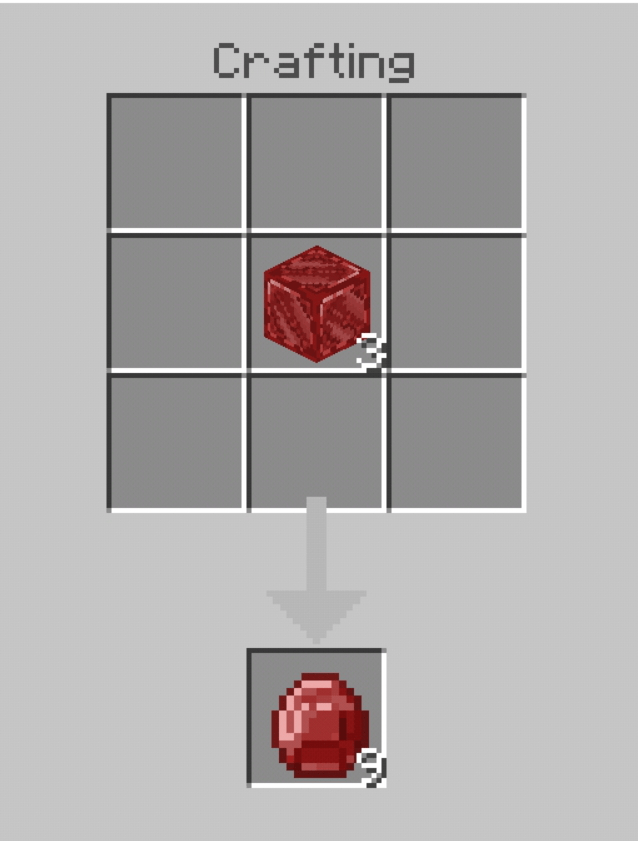 You can also craft the Blood Diamonds back in-case you don’t want the Block anymore! (You don’t need 3 blocks to craft 9 diamonds) 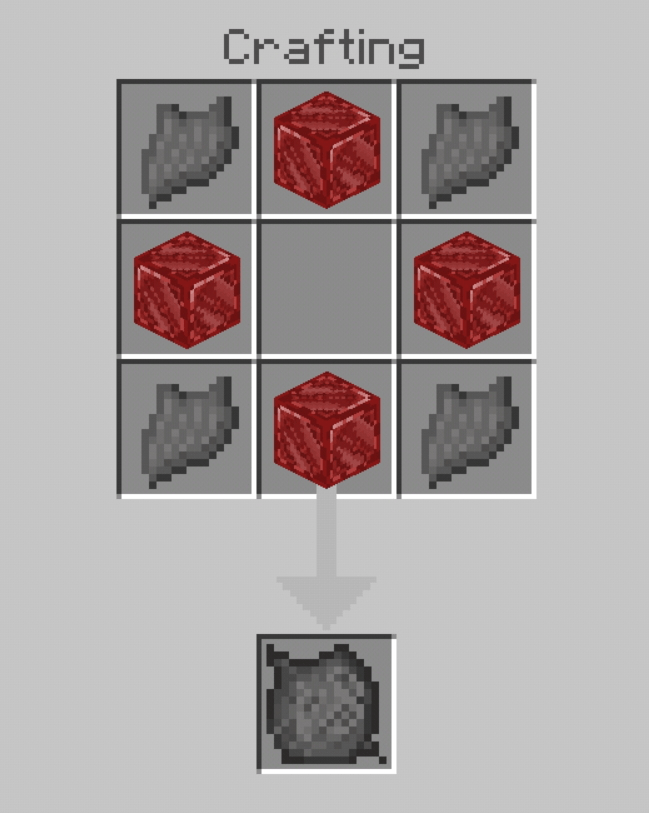 Plated Wolf Skin is a hardened, stronger version of the Wolf Skin. It is VERY expensive, but it is required for the crafting of the New Weapon 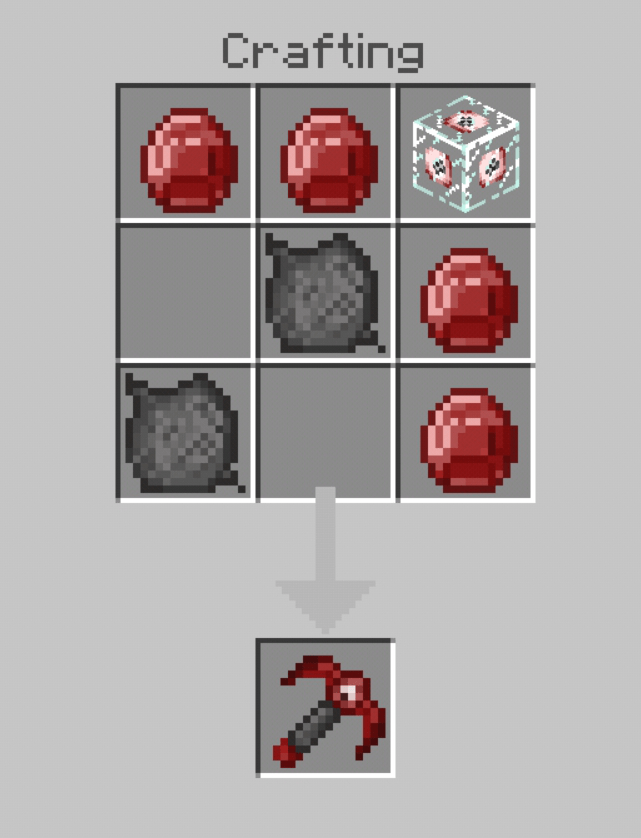 You will require 2 Plated Wolf Skin, 4 Blood Diamonds and the Glassed Eye to craft the Blood Diamond Hilt. Expensive, but worry not, for this is 2nd to the final step for the crafting of the sword 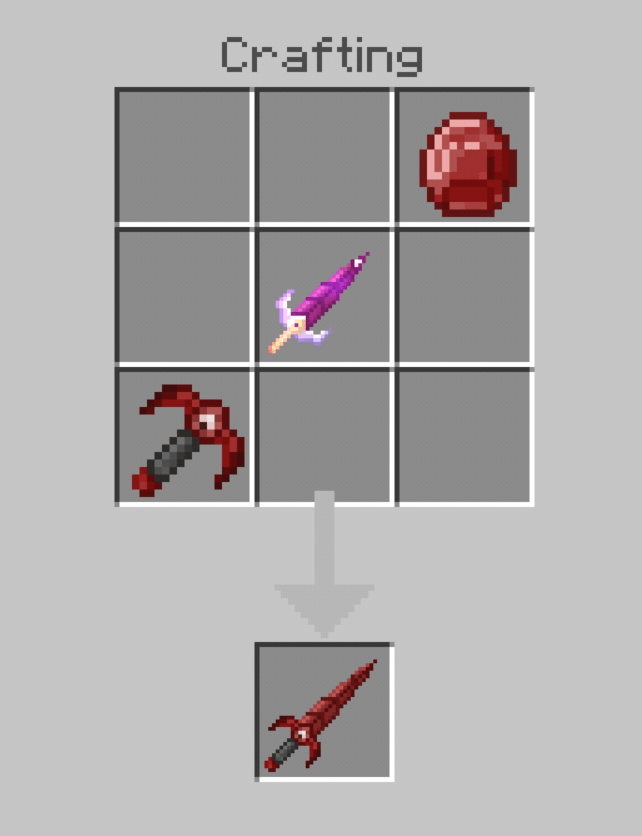 This is the final version for the Dracula Great Sword, which is now called the Blood Diamond Sword. 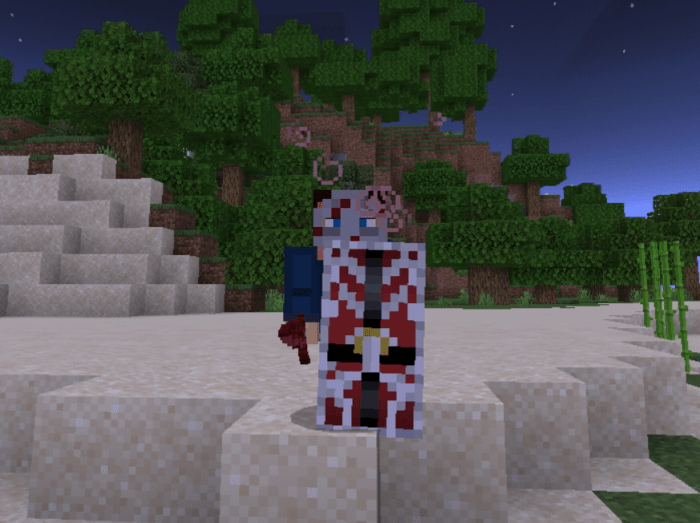 Alucard now drops his own shield upon death! You can still craft it as usual, the shield only has a custom Texture update!

How to play as a Vampire yourself?

Want to get most of the new items instantly? Activate commands and use /function givevampire to get almost all the items automatically. You can find the Spawn Eggs in the Creative Menu as said before

Here are some notes I, the Creator of this Add-On, had made

If you’d like to see these come in future updates, please let me know in the comments!

No, you do not need to download the Skins for this mod/ add-on to work. The skins are available in case you want to play with them :3 (also because they’re not mine)