This map featured a huge computer which is entirely powered by redstone and command blocks. It includes a few different features such typing, executing command lines and playing tic-tac-toe. It’s definitely one of the best looking and most advanced redstone computers so far created for the bedrock version of Minecraft.

How to use the computer?

You’ll spawn in an office with some bookshelves, a chair and a computer. Don’t worry though, there are much more to see than this!

Press the button next to the computer to access the enormous redstone computer. 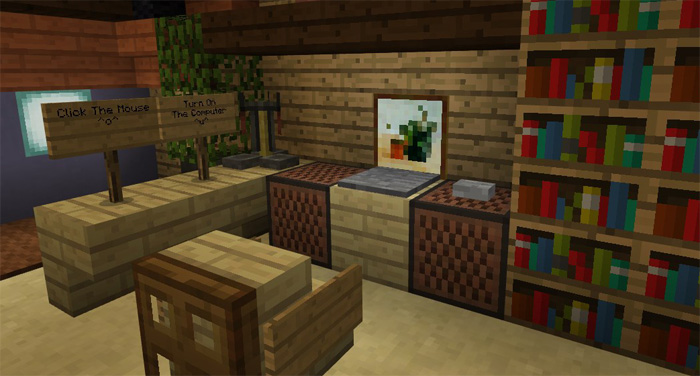 Turn on the computer by pressing the green (left) on button at the bottom right corner of the screen.

You can type things and have them appear on screen by stepping stepping on the different keyboard keys (pressure plates).

This is the “Word” feature which allows you to write text on the computer. You can reset the computer screen by turning the computer off and then on.

Another cool feature is the command line feature. Simply type a command (e.g. /night) to set the time to night.

You need to execute the command by pressing the return button in order to get it to work.