If you are looking for that dark experience, of mystery, but above all of pure restlessness (even better in survival)

Then you're in the right place!

This addon is available for 1.16.20, and remember to turn on the experimental gameplay

IF YOU WANT TO MAKE A VIDEO ABOUT MY ADDON, PLEASE CREDIT ME AND DON’T USE YOUR OWN LINK, USE THE PROPER LINK ON MCPEDL FOR DOWNLOAD

Each mob that will be shown, in addition to its own features, will have its original short story and a short story in the world of minecraft(some not yet) 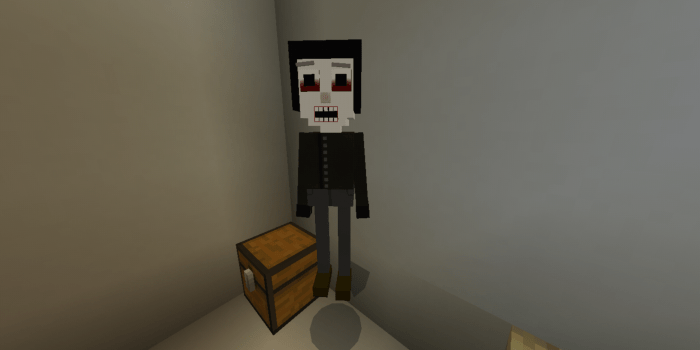 (It will not physically attack the player, but will summon the souls of its victims, the barionettes)

It will spawn inside an underground red room(There may be some mob spawners, so if you find them break them): 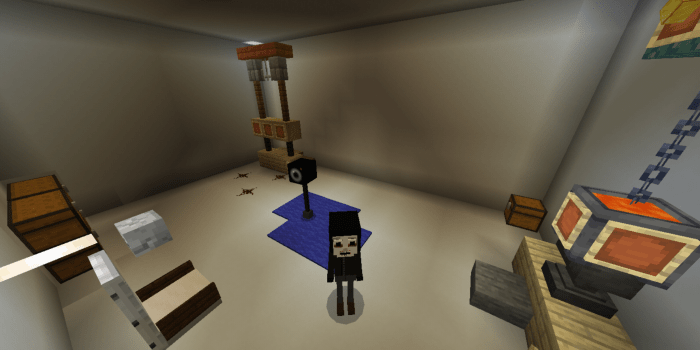 If killed, he will drop the aheno sword, a very powerful weapon that, however, if equipped, will give you wither effect, as it is possessed by the souls of ahenobarbus victims

[If you want to get the aheno sword in creative, write the command in chat /give @p cka: aheno_sword]

Ahenobarbus Henocied is the story of a man who ran a facebook account by luring minors through cryptic and coordinated messages that led to links to red room sites.

The same people he contacted ended up being victims in his red rooms (currently, however, the veracity of these red rooms is still uncertain), tortured and killed in live streaming

He is known for having kidnapped and tortured hundreds of people in the past, especially in villages looted by pillagers.

He would take his victims to his underground red room and produce snuff movies, plus he also has the ability to summon the souls of his victims. 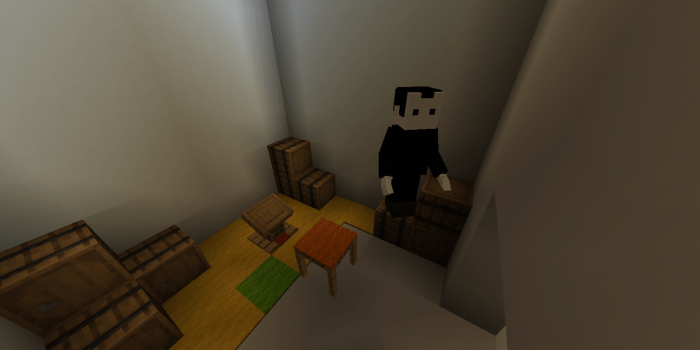 It will spawn inside an underground red room(There may be some mob spawners, so if you find them break them): 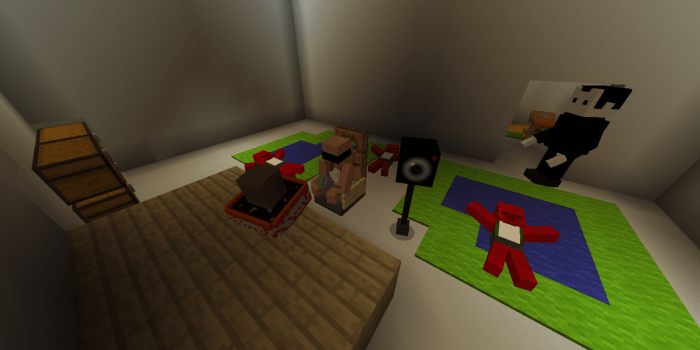 You can find the main victim eating human soup, and some corpses of skinless villagers

If killed, he will drop a lot of totem of undying

The origin of this creature derives from some videos on youtube uploaded between 2005 and 2006, where initially it was speculated on the origin of the video, thinking that it was a man kidnapped and forced to eat human soup.

However, after some research by users, it was discovered that on daylimotion there was a channel with the two characters in the video "torture soup avi" which was called "ray ray tv".

In this channel we discovered quite harmless and far away videos, besides we discover the real name of the two subjects, "ray-ray", the same videos were directed by Raymond Persi, who through these characters I try to create a mirror where each of us sees the feelings he is experiencing at that moment

The identity of the disguised subjects is not known, but it is known that they run a large black market of human flesh, always in an underground red room, sometimes before killing their victims they make them try recipes with human flesh, such as a soup, or something else

It is unknown who is in charge of this trafficking and this group, but it is thought that there is a wealthy billionaire behind who made a fortune from the illegal trade. 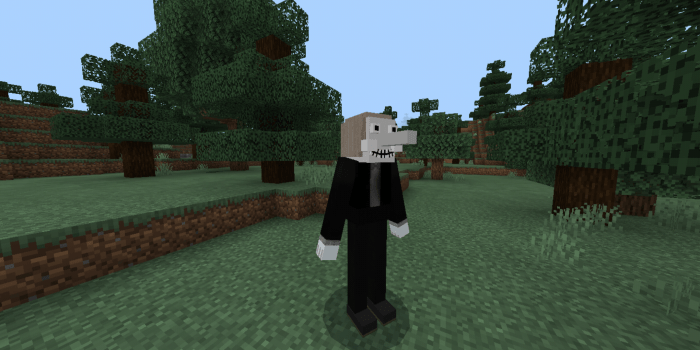 It will rarely spawn in taiga, but you can find some villagers and animals with his mask controlled by him

If killed, he will drop his masks and a mysterious box...

(To wear the masks, you have to hold on the screen for a few seconds) 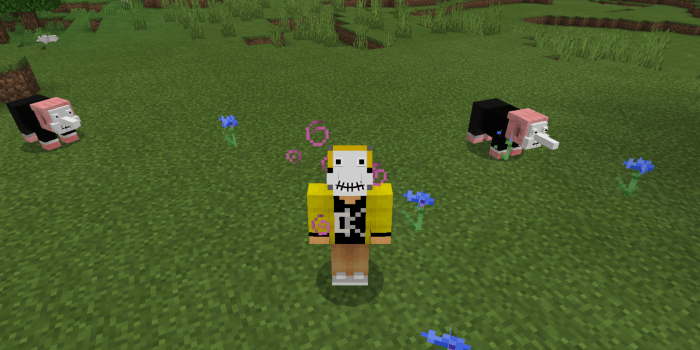 This is the main bonk mask, which when worn will evoke pig bonks 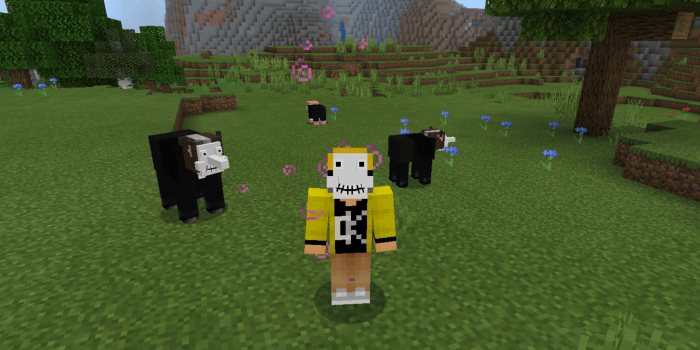 This is bonk mask 1 instead, which will summon cow bonks, both will face off against hostile mobs

(it will not be properly tamed, and it will not follow you if you do not use a leash)

To evoke more, just put on and take off the mask several times.

Obviously you don't have to wear both masks together, before putting on another one, remove the one you already have

[Many mobs manipulated by Noseybonk they walk without moving any muscles and limbs, except for a few]

AVOID WEARING OR REMOVING YOUR MASK IN FRONT OF AN ENEMY OR ONE OF THESE CREATURES, DO IT IN AN ISOLATED AREA, SINCE IT COULD CAUSE PROBLEMS....After you can quietly show you

You can obtain these mask by the command "function two_mask"

You can open the mysterious box, the "nomad petrol" by hitting it but a demonic head will come out and deform and if it attacks you it will give you the effect of nausa 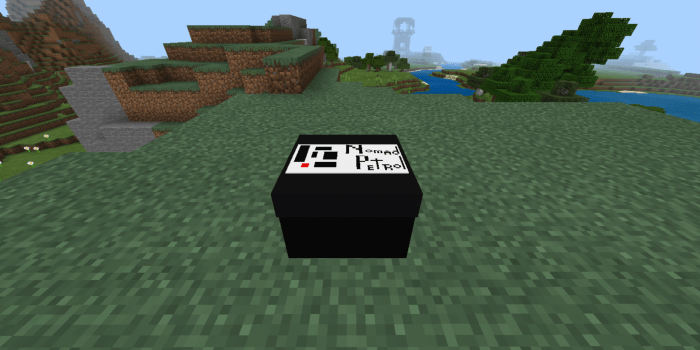 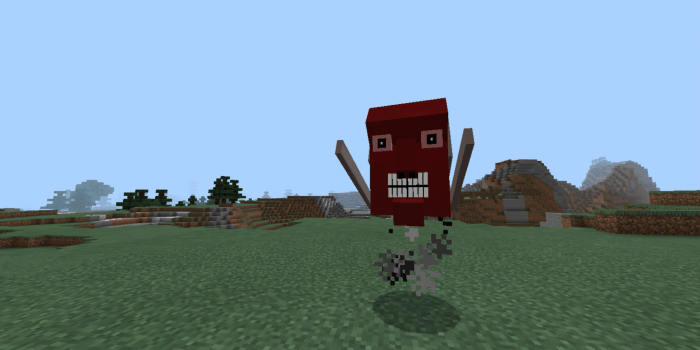 Not surprisingly, the producers of the program realized that the actor was no longer able to distinguish fiction from reality, entering into an ambiguous harmony with his character, for this reason, the executives forced him to leave otherwise they would take legal action, as his condition was worsening

In 2008, however, it reappears on youtube with some very disturbing videos

However, much was discovered at some point that in fact the mentally unstable actor never existed, and that in fact "Mr Noseybonk" was played by the same creator of the series, Adrian Hedley.

Instead, the 2008 youtube videos featuring Mr Noseybonk were made by British comedian Stuart Ashen, who reviewed games, consoles and food on youtube.

It can be seen very rarely in the taiga forests, it has managed to capture and control the minds of some villagers forced to live in small houses scattered around the taiga, and even some animals such as cows or pigs.

As if he were in effect the guardian of the creatures he enslaved, in his possessed territory

In addition to controlling and enslaving his victims, he managed to create copies of his victims and duplicate them by summoning them from his mask 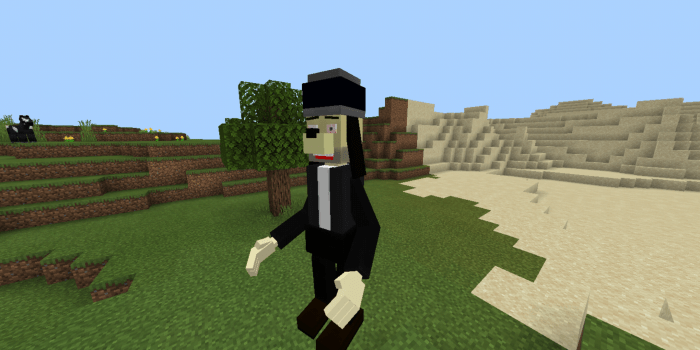 (It will not physically attack the player, but if you get close, it slowly pushes you to suicide, even causing shadow hallucinations)

However, the true origin of this character, or rather the mask, comes from comic videos made on youtube around 2010. 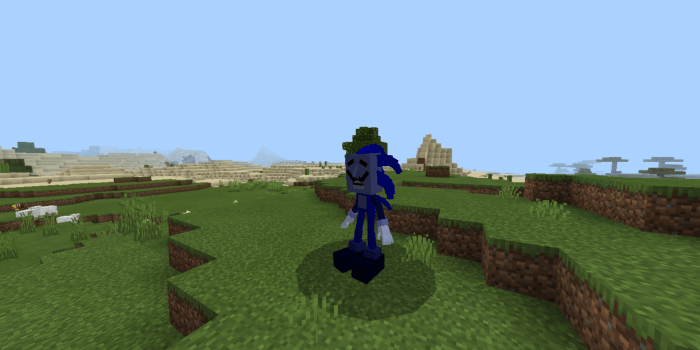 Attack: 12, it will give slowness effect

It will be very fast, it will teleport and it will have the ability to duplicate itself, It is very rare to find and it spawns in the hills 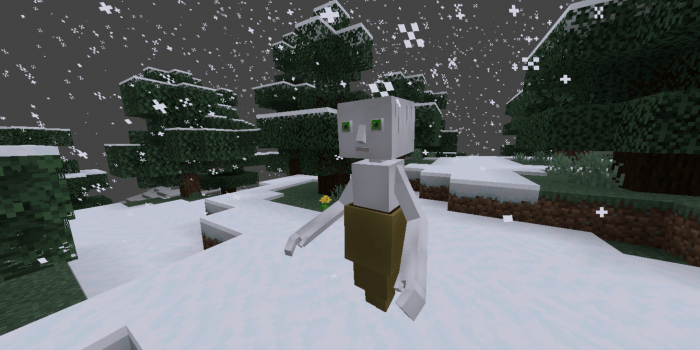 (It will not physically attack the player, launches a barrage of his little clones)

In addition to lava, if it comes into contact with water it will die very quickly

In 2012, Little Baby Ice Cream, an ice cream company in the city of Philadelphia created a commercial with a person covered in ice cream, and uses a spoon to consume ice cream from his own head

He escaped from the studio where he was shooting for an ice cream commercial, slowly becoming more than a human being a floating being on his cone, moving away from his human nature 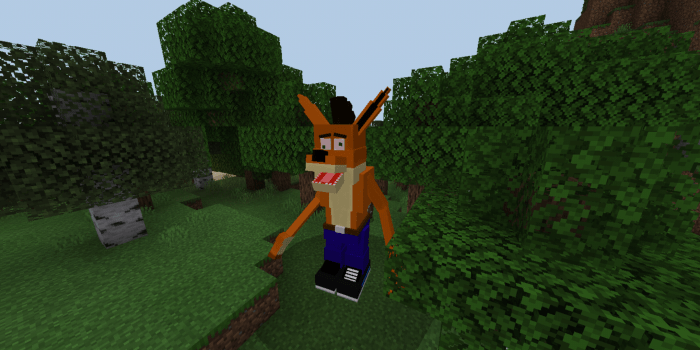 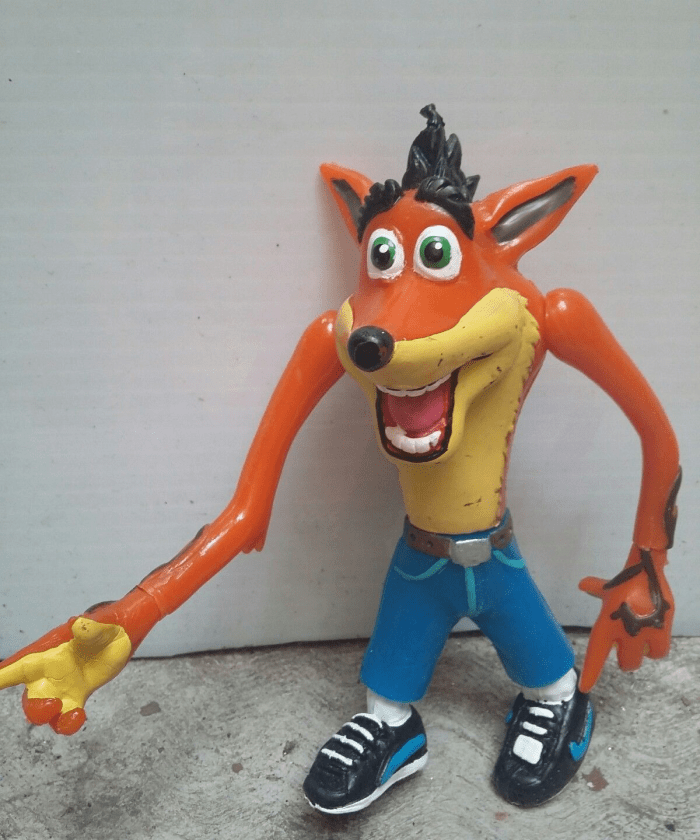 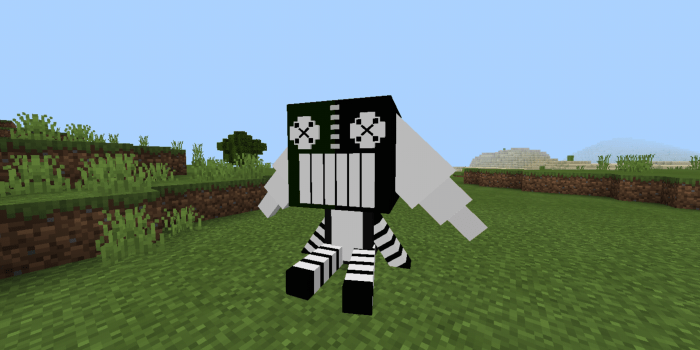 It is a big puppet made poorly depicting a bear, that if you give it bones, it comes to life and will protect you from other hostile creatures (it will not be properly tamed, and it will not follow you if you do not use a leash) 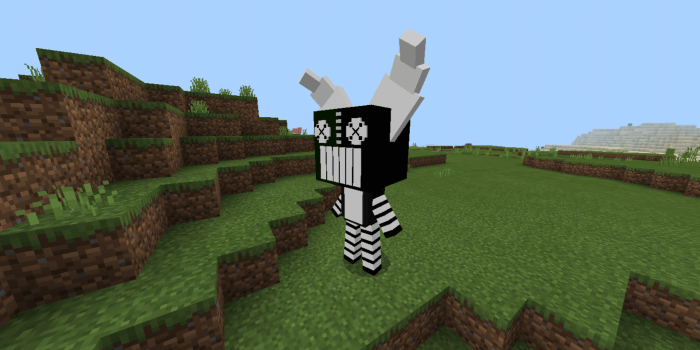 It will give to enemies blindness effect

It has 4 stages (this is the first) and to reach the final stage you have to keep feeding it with bones, and in addition to becoming more and more a true hungry bear, it will increase its attack and its health 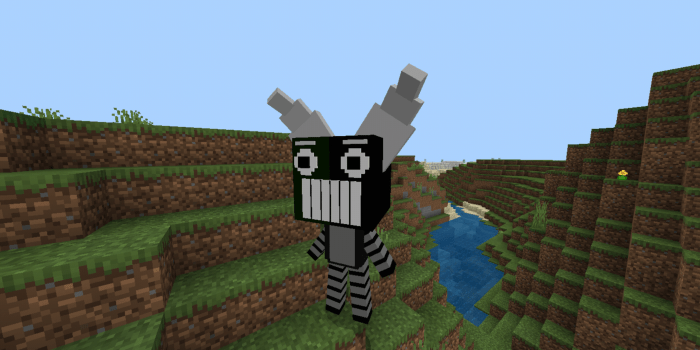 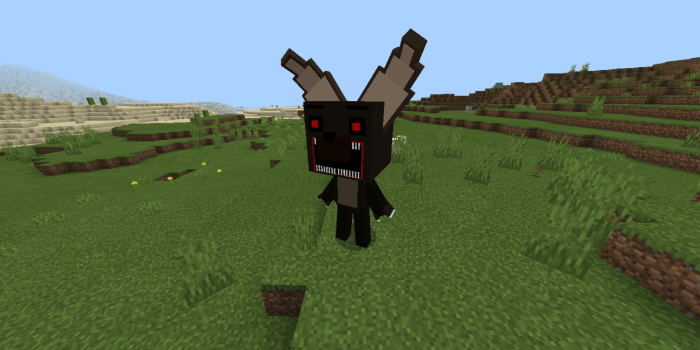 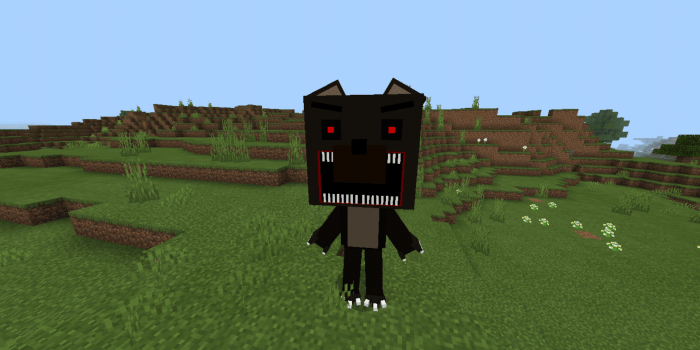 The creepypasta tells of a child who was given a poorly made bear puppet, where at a certain point it begins to come to life and asks the child to feed it with teeth and in return protects it from nightmares, and slowly it becomes more and more plus a living creature

And finally, the rest of the mobs

Cow and Pig Bonks Evil, are the animals that spawn in the taiga and are hostile to the player, not to be confused with the counterparts that the player evokes wearing the bonk mask 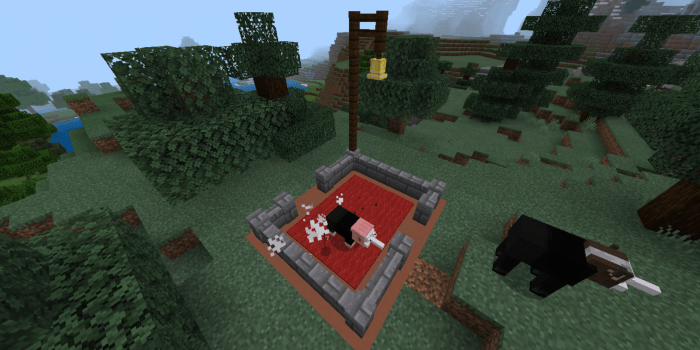 Villagers Bonk, they can be found in small houses scattered around the taiga

(There may be some mob spawners, so if you find them break them): 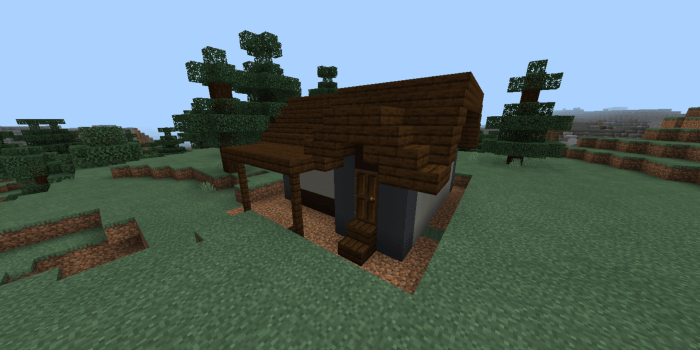 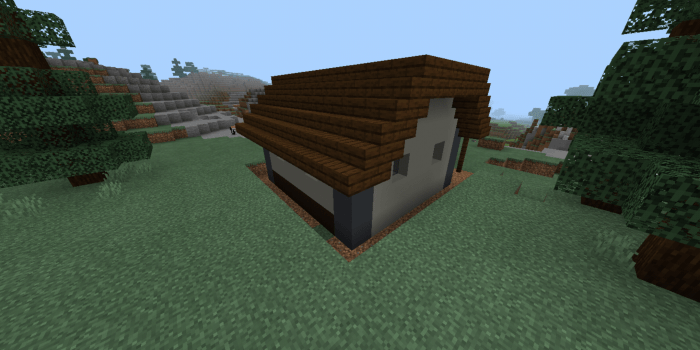 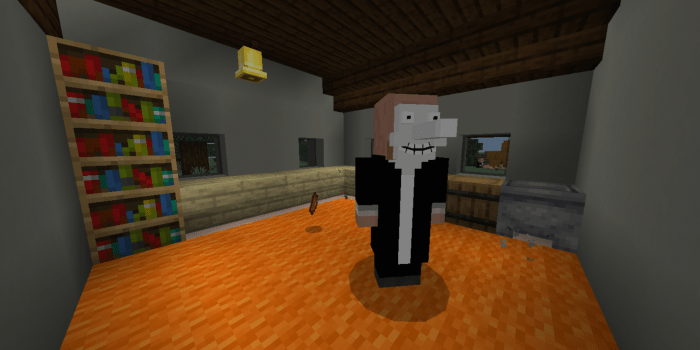 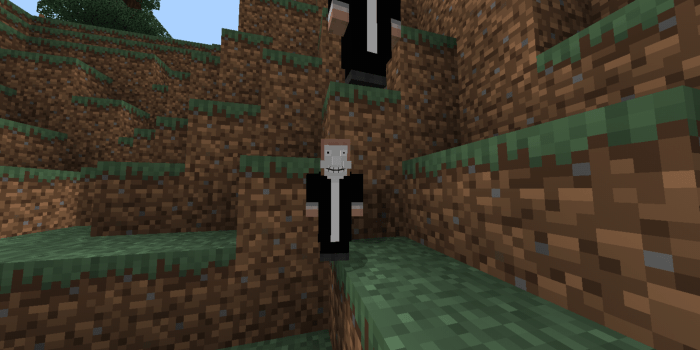 Since the structures are in the experimental phase, for safety, lower some graphic settings, such as the render distance

Little change to texture of sadly happy crash and bowl

1.For linkvertise, first of all you have to check that you are not a robot by clicking on the "recaptcha" box

You will now have 2 other steps to complete:

Activate the notifications and then restart the page, redoing the whole process from the recaptcha

Watch some advertising articles for 10 seconds

Of course, you can return to linkvertise for disable the notifications from "allow" to "block"

All this is very important to support my work and my channel, as creating an addon takes a lot of time and also resources

Both are mcaddon files, just click on it and automatically installs the resource or behavior of addon, it depends on which one you install first

March 04, 2021 at 8:23 pm
i know jonathan galindo! he is the popular instagram and discord hacker that treathens to kill your family if you dont do what he says so if a jonathan or blue whale says "wanna play a game" DONT ANSWER! for real he EXISTS its the BLUE WHALE CHALLENGE!
Log in to Reply

October 29, 2020 at 1:54 am
This addon is great, i love seeing non-mainstream creepypastas and horror-based things like Noseybonk and stuff, only issue is, i can't play this in Experimental Mode, it crashes a LOT, probably due to the structures. If there's anyway to fix this issue, this addon would be perfect, keep it up
Log in to Reply

September 08, 2020 at 10:24 am
I dont wanna play minecraft anymore because of this addon lol
Log in to Reply

September 06, 2020 at 1:23 pm
This Add-on is really cool! But it sometimes crash when I use it and I don’t think it’s me because some bigger mods are perfectly fine. But idk if it’s because I was doing it on multiplayer or something.
Log in to Reply

1
There Is No THJ

September 06, 2020 at 11:00 am
Really cool and bizarre addon. All it needs are some custom sounds for the mobs that can improve the horror factor, but other than that its a great idea so keep it up.
Log in to Reply