This function pack will bring new features to your game allowing you to do many cool things that weren’t possible before, now you just have to enter /function (action) and you are off to change the way Minecraft bedrock edition works

This function pack introduces many new features from a bunker to house and much more, one feature called banned is not fully capable of stopping hackers but it can keep them at bay. For a full list of all the functions type in /function help and it will show all the commands 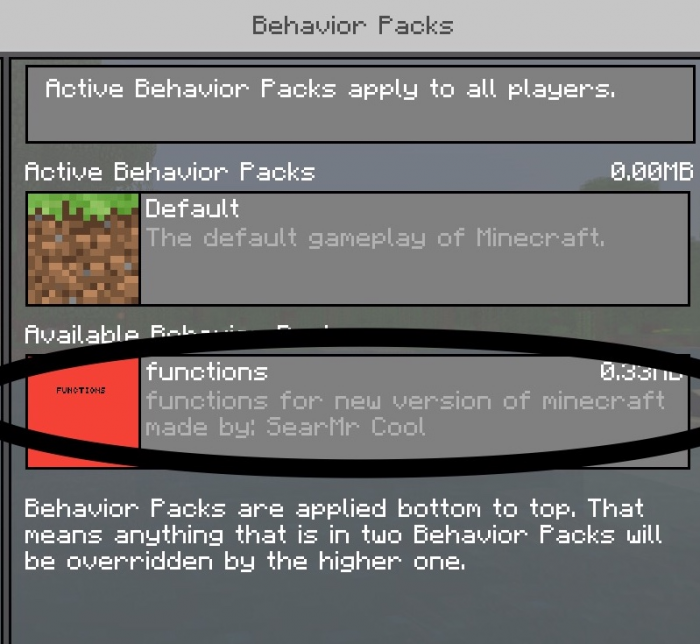 /function ban will effect players in a 5 block radius and the effects are slowness, weakness and invisibility and there milk buckets will be removed.

/function house willl give you a house to decorate.

/function bunker will surround you in obsidian and you will be given some food and a diamond pickaxe.

/function flash will make you become super fast and you will leave a trail of fire behind you, this command has to be entered into a repeating command block to work.

/function grapple gun will make arrows make a bridge where ever you shot them at, this has to be entered into a command block to work.

/function vanish will make you invisible.

/function punish_hacker will make a bedrock box with some zombies in it and then you can to the hacker there.

/function lightning_strike will strike lightning on all the players a part from the player that executed the command.

/function break will crash/corrupt your world, it does this with a little zombie magic. credit goes to element x for finding this command.

/function credit will show you the person who made it.

/function pranks/exploding_ore will make diamonds appear around the command block that is required and when you get in a 5 block radius they will explode.

/function pranks/unsolid_floor will fill an area with an unsolid wooden floor with lava underneath.

/function pranks/sick will effect all players with nausea but this will not affect the player which executed the command.

Hope you enjoy the function pack!

Equip the behavior pack Showen up around the top and you are off.

June 20, 2019 at 6:46 am
Took a peek at the functions that make up this pack. Terrible programming and extremely messy. Works on your skills man, and don't post projects that are half baked and pointlessly messy like this one.
Log in to Reply

March 23, 2019 at 7:45 am
You can use this on realms. What you can do, is export a world to your files, and then import the world that already has the pack onto the realm. If you do not have Windows 10 you probably cannot do this.
Log in to Reply

March 02, 2019 at 2:58 pm
I am not sure if this works on realms or servers so I will change the name because I have no Idea if it works or not
Log in to Reply

March 01, 2019 at 4:32 pm
The grapple gun command doesn’t work other than that it’s good helpful for trolling my little bro
Log in to Reply

February 28, 2019 at 7:23 am
I didn't tested it because the newest minecraft beta doesn't work on my PC but I think it is really good and you have made somethin in the spelling wrong at the warning
Log in to Reply

February 27, 2019 at 10:13 am
This is really bad and poorly written please work on your programming
Log in to Reply