Do you want to add more variety and difficulty to the game? Maybe this add-on is for you, this add-on will generate new creatures in your game that can be a great challenge. 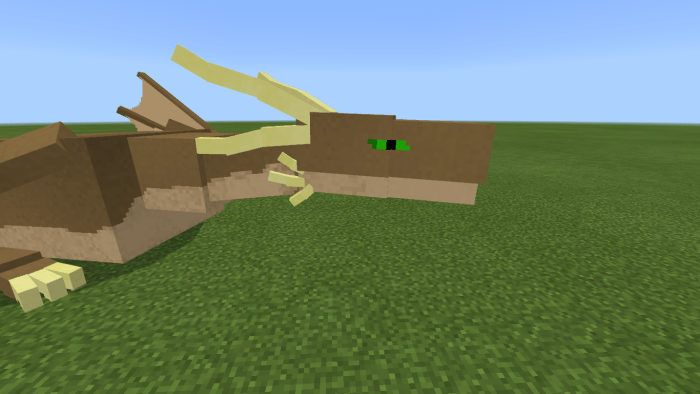 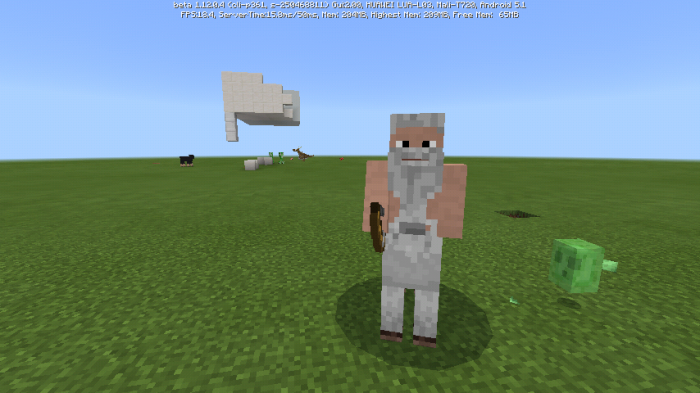 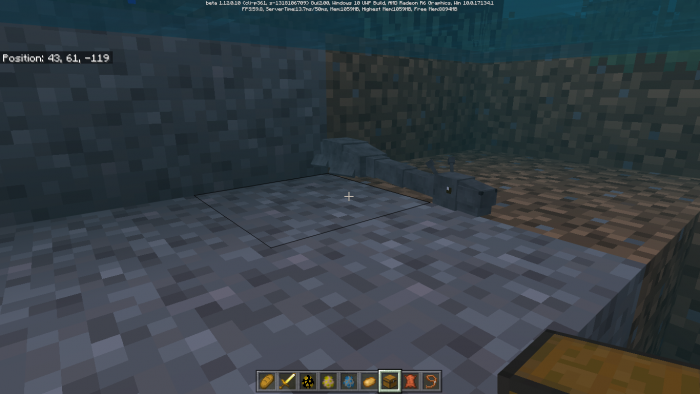 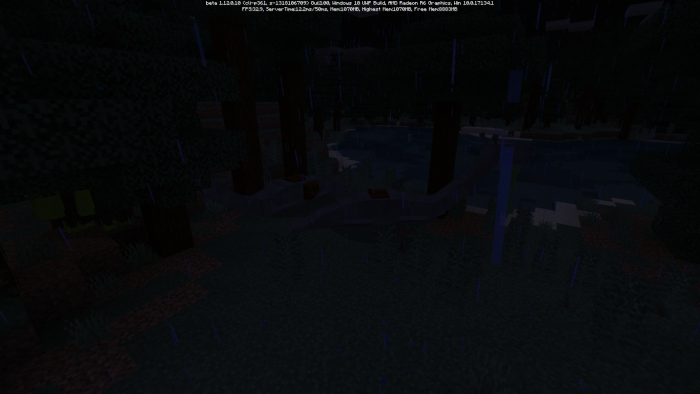 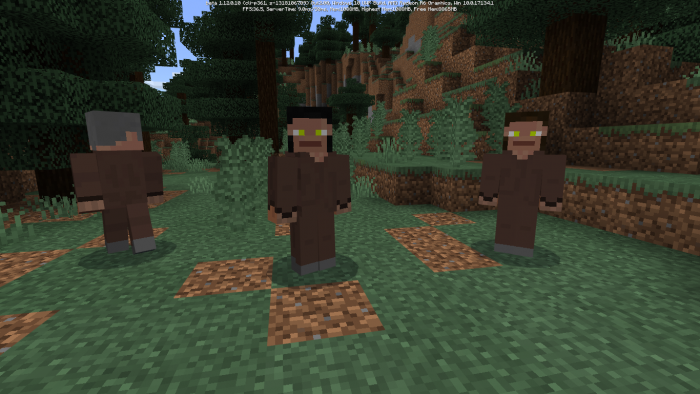 Interesting fact: Maybe before they attack they will howl at the moon. 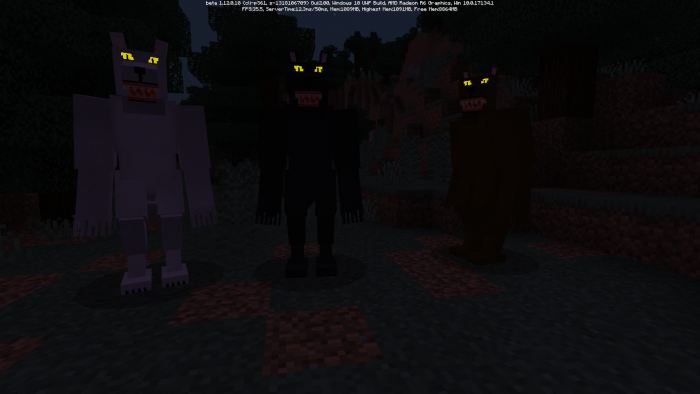 (The video is an example, the animations in-game are different)

This is a beta so it may be subject to changes, if you have any ideas or find a bug report in the discord channel, feel free to make videos of the add-on if you wish but KEEP THE LINKS PROVIDED HERE.

April 10, 2021 at 8:57 pm
This is very nice,keep the good work.Only one suggestion:It should be cool that the werewolves when they attack the players,they would get infected by them.
Log in to Reply

February 09, 2021 at 8:20 pm
Here are things that i believe should be added.
-Goblins, neutral to player, will steal things, and has unfair trades.
-Hobgoblins, like goblins but much more powerful.
-basilisk, giant snake that will turn the player to stone or kill them upon looking at it.
-naga, much like basilisk but smaller and does not turn player to stone.
-greater wyvern, large wyverns with elemental breath attacks that are similar in size to ender dragon and are similar to wyverns from the game ARK
-Dragons and Great Dragons, normal dragons are similar to the ender dragon but different colors with different breath attacks, great dragons are very powerful and rare and have many different attacks.
-hydra, much like twilight forest hydra but has 4 legs, grows more heads, maybe a golden or red color, and possibly flies.
-lich, powerful bosses with lots of health that will spawn in necromancers and any kind of undead.
-elf, humanoid creatures spawning naturally in forests that wield bows and will offer trades for rare and magical items.
-dwarves, shorter, stubby humanoids that wield battleaxes and will offer trades for ores and weapons
-halflings/hobbits, short humanoids that prefer not to fight but will offer plant and farm-based trades.
-ogres, much stronger versions of orcs wielding an entire tree to fight with.
-manticores, half lion, half scorpion with wings that will spawn in extreme hills and will inflict poison upon players.
-kraken, colossal squids that will spawn in the deep ocean and pull players and their boats underwater.
-leviathan, super rare underwater beasts that will use a multitude of attacks to kill the player, they are nearly unstoppable.
-kelpie, horse looking mobs that spawn on beaches and will transform into terrifying creatures that pull the player underwater to drown them.
-sirens, mermaid looking creatures that will sing(pulling the player near them) and then they will attack the player.
-fawns and satyrs, fawns are half goat, half human creatures that spawn in forests and will offer trades to the player, satyrs will attack the player and are larger than fawns.
-yeti, large beasts in the tundra and ice spikes biome that will pick up players and eat them.
-cyclops, giant creatures that will spawn rarely in the extreme hills and will also try to eat the player.
-medusa, a boss creature spawning in her own lair that will turn players to stone upon them looking at her.
-demons and devils, demons are aggressive flying creatures spawning in the nether, possibly wielding red tridents. devils are friendlier counterparts to demons that may offer nether based trades.
-ghosts, humanoid creatures that can phase through the ground and can only be killed with a trident with impaling or some other enchanted item.

ITEMS(possibly for when 1.12 comes out.)

-ogres tree weapon, 15 attack damage, player gets slowness as long as they wield it.
-minotaur’s hammer, causes between 10 and 25 damage
-orc’s club, does between 15 and 20 damage
-wyvern stinger, inflicts poison and does lots of damage
-leviathan tooth sword, crafted with a stick and 2 leviathan teeth(dropped by leviathan) sword inflicts between 20 and 35 damage
-possibly spellbooks, dropped by mobs like lich, witch, evoker, and necromancer, will allow the player to inflict certain effects and summon entities.

Medusa’s layer, run down building with skulls and stone statues littered all over, medusa spawns here.

February 09, 2021 at 12:08 am
The werewolf being killed by specific items is a unique idea but I think it gives the
player the burden of always having to carry that specific item. Instead maybe make the werewolf more easily damaged by the item like a blaze is to a snowball.
Log in to Reply

January 15, 2021 at 5:37 pm
Minotaur does way more environmental damage than actual damage, which gets increasingly frustrating. It's like a creeper, but less lethal and far more annoying. The Wyvern is horribly buggy, whenever i run into one, my screen is flooded with error messages until i get away from it. The fact that werewolves are damaged only by gold and not also netherite is beyond stupid. Netherite ingots are MADE with gold.

3 things need to happen: Make it so netherite hurts werewolves, either adjust the wyvern for bedrock or at least provide a version of this mod that does not have the wyvern at all, adjust the minotaur's blast radius and damage ratio to at least make sense.

P.S: Centaurs should have fire arrows...
Log in to Reply

February 13, 2021 at 8:14 pm
I think adding silver is going to change the way the werewolf is attacked btw I also agree with the comment above, it shouldn't be limited to just one weapon but one of silver should make more damage to it. The wyvern had a animation which make visual glitches, so I removed it and now it should work better and finally I'll keep in mind about the readjust minotaur blast radius. Thanks for your feedback!
Log in to Reply

December 12, 2020 at 3:57 pm
A chupacabra could spawn nearby goats in Caves and Cliffs update. It's a fact that chupacabra eats goats, the goat flees from a monster until they are 16 blocks away from it, but don't ram the player while running away. I could use that monster as a bounty event for my server. Maybe a monster could spawn inside extreme hills caves, at least a biome where goats being move to.
Log in to Reply

November 06, 2020 at 11:16 pm
I really really love your addon! Can I have permission from you to edit your addon for a modpack I'm making?
Log in to Reply

November 01, 2020 at 3:49 pm
Hey, remember that one guy who told you to add cthulhu, ogopogo and some japanese myths? well the difference between ogopogo and nessie is that ogopogo has no limbs, just snake, and by looking at a yugioh card artwork (danger ogopogo) looks like it can break wood and for japanese myths, Kahaku (a.k.a kappa, duck person who lives near lakes and kidnaps and/or drowns you) Kechibi (fireball with face, pretty sure they kill you?), Koromodako (octopus guardian of lakes) and lastly, The Kunekune, its a piece of paper that eats rice and stuff
Log in to Reply

October 14, 2020 at 8:04 pm
I was testing on Difficulty easy. When I changed to normal, mobs attacked as expected. Derp derp
Log in to Reply

October 18, 2020 at 12:00 am
This add on is amazing! I absolutely LOVE the wyvern! Maybe in the future could you add different types of wyverns like a fire, ice, thunder, dark, or maybe a light wyvern? Also, could you maybe make it so that you can ride the wyverns at a younger age? And lastly, maybe you could add more creatures such as unicorns, pegasus, dragons (or a different looking/species wyvern), griffans, and maybe add some new bosses like the king of wyverns or something like that!
Log in to Reply

Minotaur is mentally challenged and his attack is very weak against the player. Even if you attack him from behind, he still lunges in whatever direction he is facing, and the attack only pushes the player back. No damage at all. I got more damage from falling.

Wyverns hit box doesn't include the wings.
Log in to Reply

November 01, 2020 at 10:06 pm
Hey Santiago the link doesn’t work to download the resource or behaviour it just comes up with ads after i skip adfly and i really want this addon can you please help
Log in to Reply
Report Comment
Follow:
Login Sign Up Submission
Tweets by MCPEDL
Tweets by MCPEDL