Beautiful, squeaky-noise mammals that struggle somewhat on land but do wonderfully in the deep. Much better than you, that's for sure. These graceful creatures will transform your oceans. For the better. More or less.

Largest toothed whale by a mile. Well, by 70-odd short tons, but who's counting? Will generally only attack players if they attack first. Unless you're really unlucky and you come across the fabled Moby Dick. Get those coords real quick!! You're going to need them if you ever want to see your stuff again. 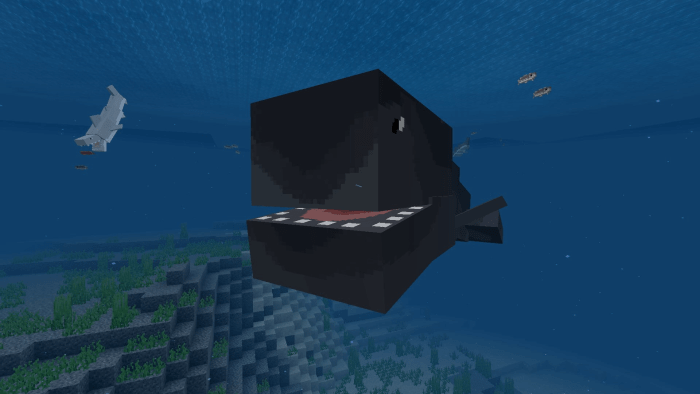 Everybody's favorite black and white oceanic apex predator. You may know them as Orcinus orca, but to others they're just plain ol' killer whales. These will spawn in all oceans that's aren't considered frozen. Breedable (not easily, however) with fish (thanks Sushikè for the idea). There are three variants with slightly different behaviors. 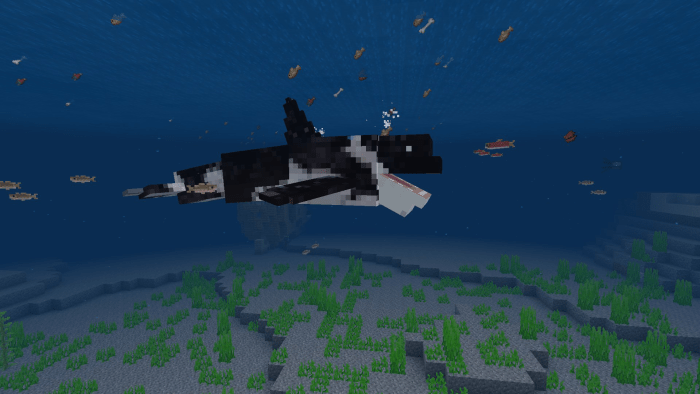 FIxed (I think) the whale-stop-moving problem. Also made the orca breedable, but it's quite difficult to make it happen. Thanks to Sushikè for suggesting both improvements.

1
AsaTsui April 05, 2021 at 2:24 pm
Best ocean addons for whales, but orcas are dolphins and not whales. Also, they can fight and eat fishes! Thanks for adding aquatic mobs!
🧡

Guest-1215591560 May 20, 2020 at 9:46 am
Many illegal and non illegal things like sea world exist this is how people die near orcas. Treated horribly and made do things. But to people who say they are peaceful in the wild? Well that’s just because we don’t inhabit the middle of the Arctic Ocean. Good addon, but it’s a death sentence to even touch a whale because not much loot for very high health. Maybe a pile of bones?
🧡

Guest-3566030803 April 30, 2020 at 12:29 pm
mno you should make a stingray addon also can u please make a resource and behavior seperate files on this one and nethercat my device does not except mcaddon files
🧡

1
JKACrazy April 24, 2020 at 3:58 pm
And i am a animal specialist and orcas are more on the dolphins side of things and orcas have killed humans but really they are peaceful creature and in most instances they save humans and help them there not the one’s killing us were the one’s killing them. there have been less deaths from orcas then lions sharks bears dogs snakes combined. and also bigger orca’s are to old and vulnerable to attack humans and large creatures so a lot people need to work on.
🧡