Pocket Mythology it's a addon that investigate all the things and creatures of the mythology of any culture to recreate in Minecraft Bedrock Edition. At the same, this add-on adds more fantasy things in Minecraft BE

The add-on adds the next things: 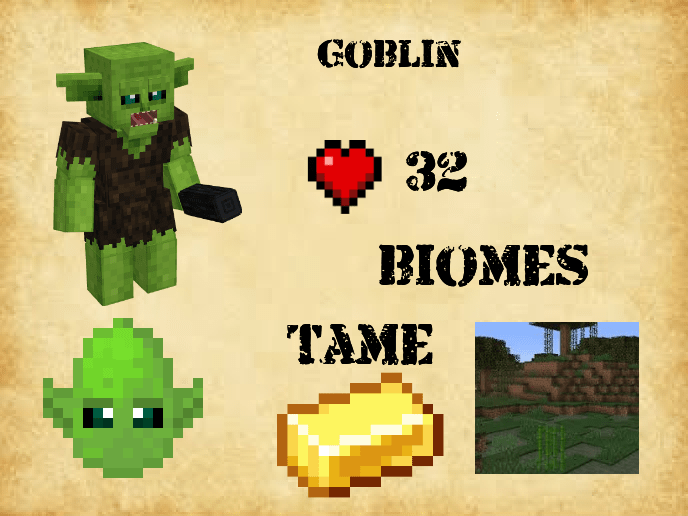 This Goblin appear in the swamps, it's a neutral mob that defend another goblins if one is on attack. You can take this mob with gold ingots.

The mob has 32 life points 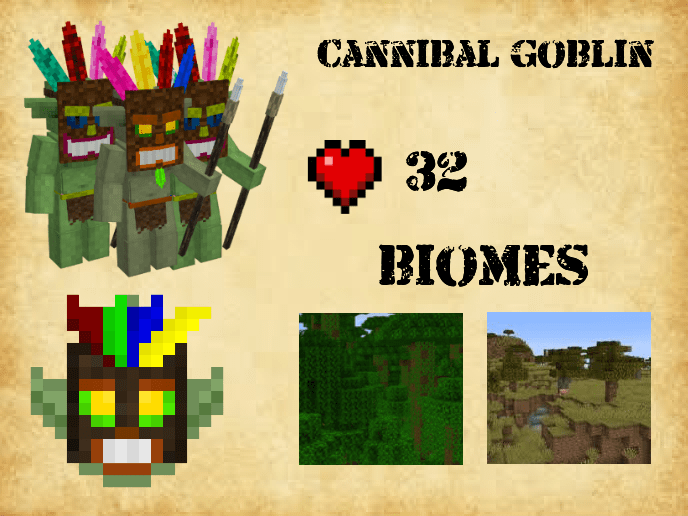 This mob is hostile, appear in the jungles and in the savanna biomes. Like the goblins, this has 32 life points but, at difference that a normal goblin, this mob is hostile and they will attack you.

If you kill the goblin leader, the others don't attack 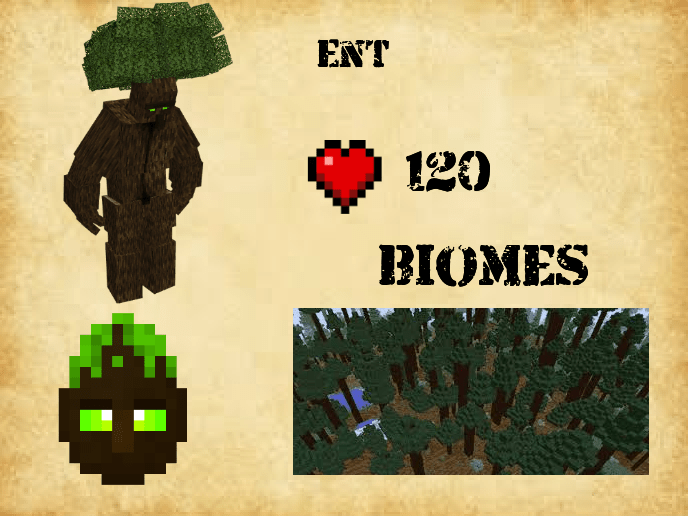 This mobs appears in the mega taiga biome, it's a neutral mob that just go around of the taiga forest.

It has 120 health points, the eyes of the mob, glow in the dark 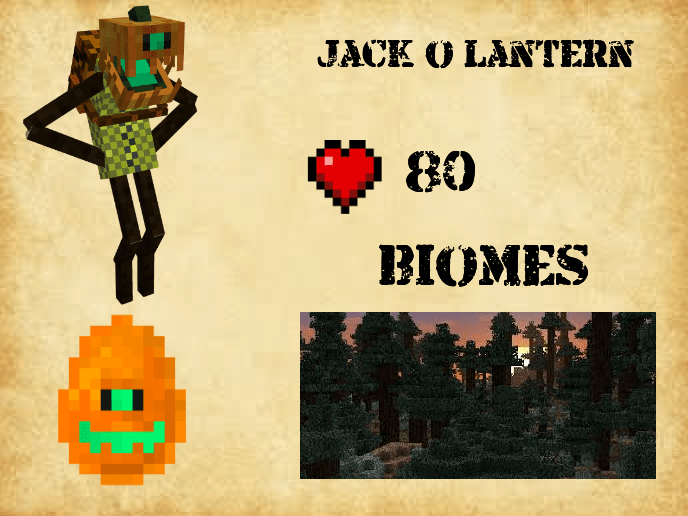 This mobs appears in the mega taigas, it's a neutral mob. The quality of this mob is that you can trade some things with him.

This mob has 80 health points, the mouth and eye of the mob glow in the dark 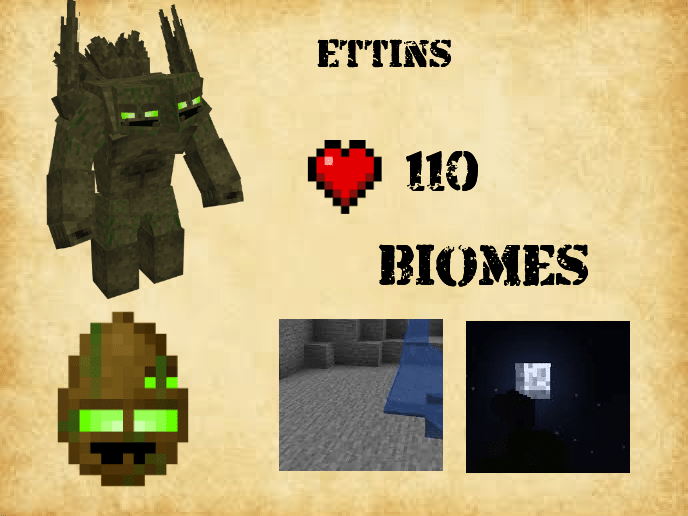 This mob can appear in caves and in the night. This has a 110 health points and it's really agresive.

When the caves and cliffs update be released, the mob appear in the lush caves. The eyes of the mob glow in the dark 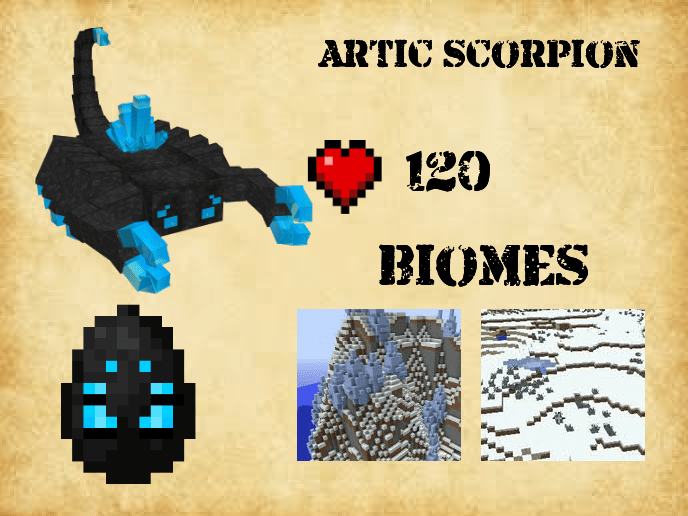 This mob appears in the snow mountains and in the snow plains, it's a agresive mob and has 120 health points 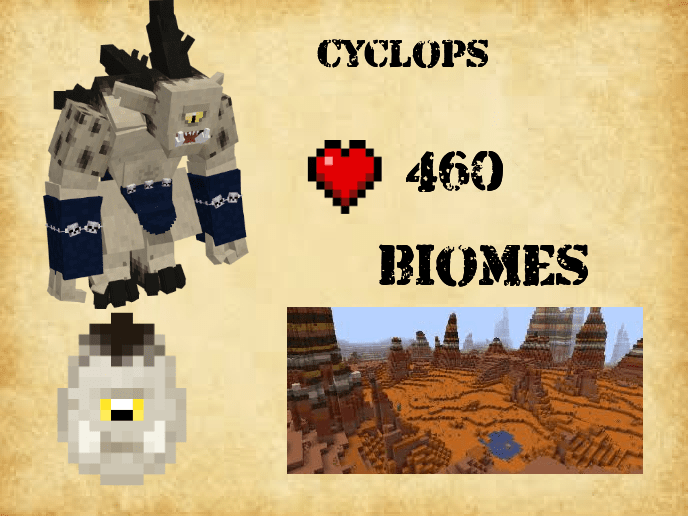 This mob appears in the Mesa biome and it's a boss mob, it has 460 health points and it's agresive at the player. 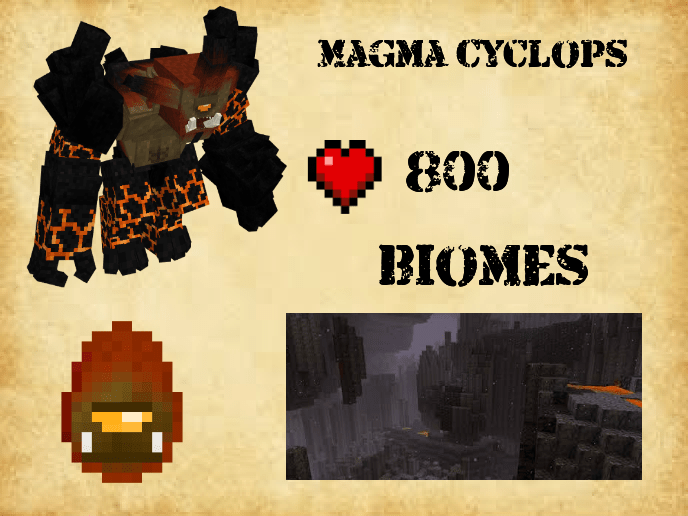 This mob it's another boss and at the moment it's the most stronger.

This mob appear in the basalt deltas biome and has 800 health points. This mob can glow in the dark and drop a new item that can be used for make a new weapon 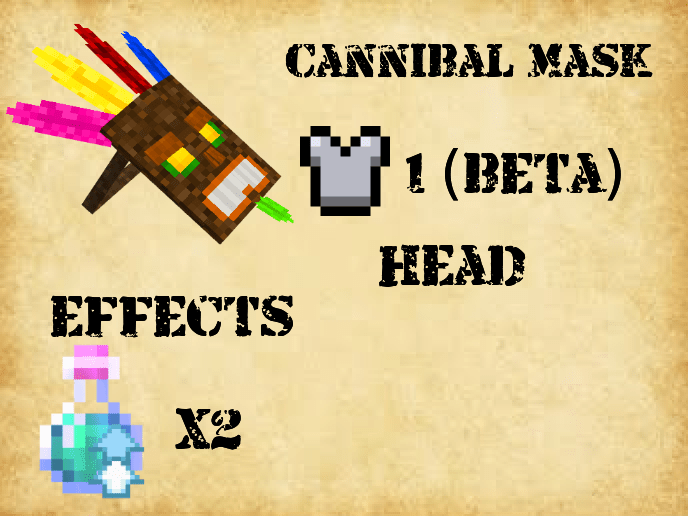 The ice armor it's in four pieces: 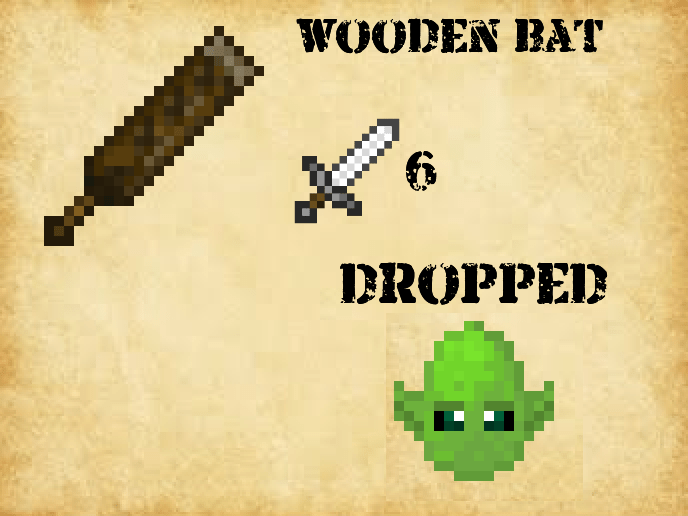 Makes 6 damage, can be dropped for the Goblin 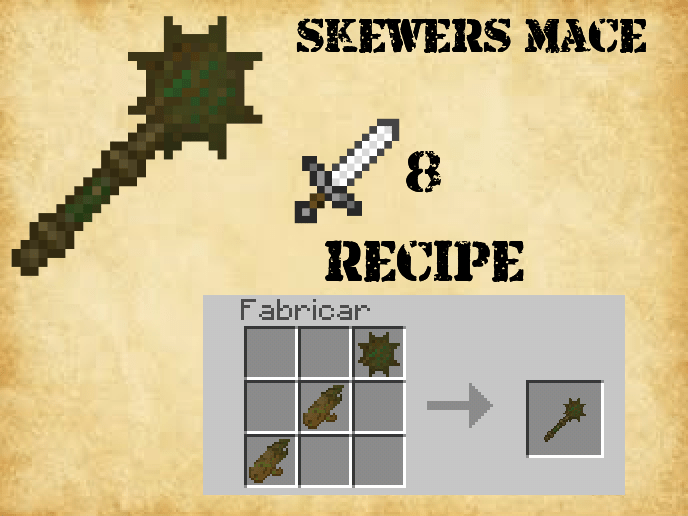 Makes 8 damage, you need to craft with Stalactites and a ball of spikes. The Stalactites can be obtained with the ettins 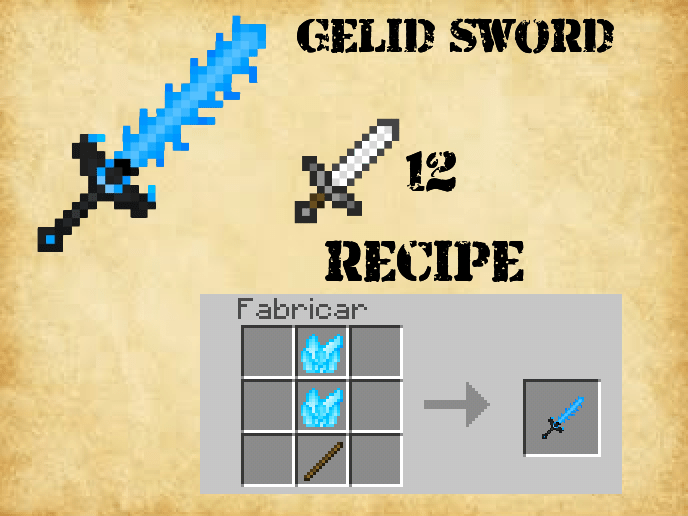 Makes 12 damage, you need to craft with ice crystal that  can drops the ice scorpion 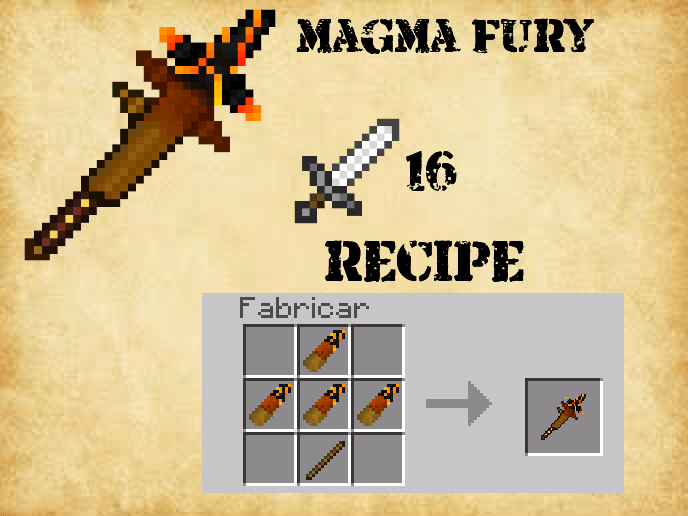 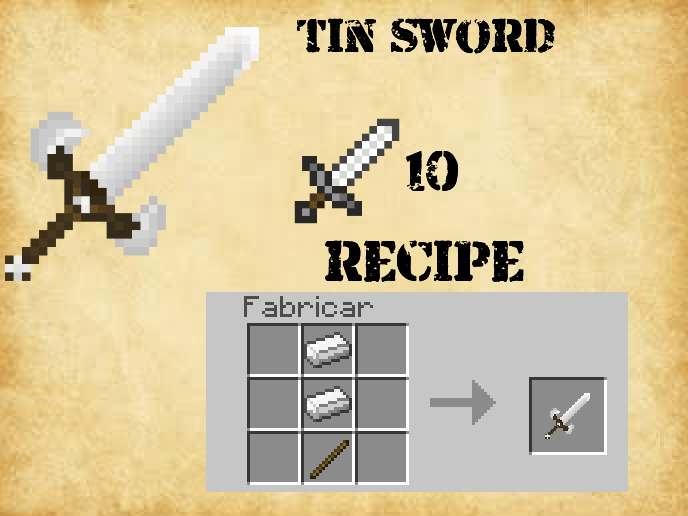 Makes 10 damage, you need to craft with tin ingots, that its a new item that the add-on adds 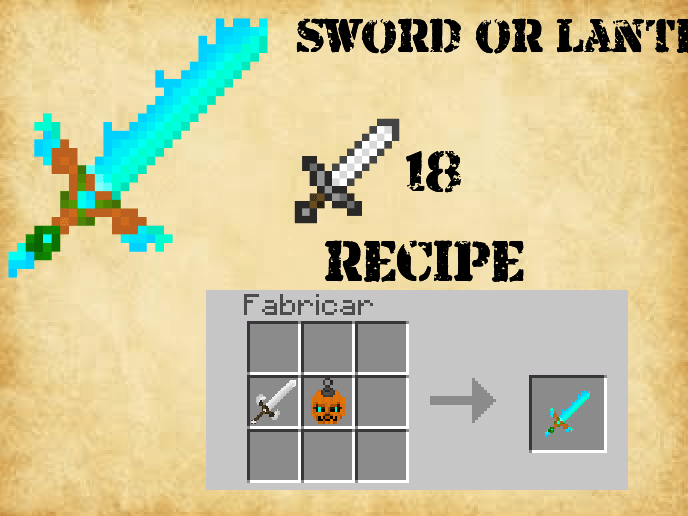 Makes 18 damage, you need to craft with the tin sword and the Halloween lantern, this lantern can be obtained with the jack of lantern

This addons add more items and blocks that you need to play to known how to obtain. Like the ball of spikes. So what's waiting, download to discover all the things of the add-on

The request to make a review of the add-on it's the next:

You need to put the following chanels

Next, you need to put the discord server

August 30, 2021 at 9:59 pm
EVERYONE IM SORRY HE WILL NEVER COMMENT THAT MEANS SOMEONE NEEDS TO MAKE THE ADDON
Log in to Reply

July 09, 2021 at 5:31 pm
Does anyone have the media fire link because the adfly does not work FIX IT PLEASE OR 0 stars
Log in to Reply

June 20, 2021 at 7:52 am
Hello
I’m just wondering if you could please make a separate mod/link for the 2 goblins only?
Mainly cause I’m looking for a goblin mod and yours are perfect.

May 14, 2021 at 9:05 pm
I think this is really well made, the only issue I have is some of the mob's health is a bit too high in my opinion also I think some of the weapons do too much damage.
Log in to Reply

April 08, 2021 at 7:44 pm
Are you playing to add structures to go with the mob for example cyclops or a goblin hut
Log in to Reply

April 08, 2021 at 7:45 pm
Are you playing to add structures to go with the mob for example cyclops Cave or a goblin hut
Log in to Reply

January 13, 2021 at 5:17 pm
Aye man do the mobs spawn naturally cuz I haven't seen any spawn naturally yet. I am trying to use this for my twitch and not sure if I can use it if the stuff doesn't spawn
Log in to Reply

January 08, 2021 at 10:17 pm
The content is amazing but creatures are not spawning naturally (I downloaded it for survival) and the discord invite is down, is there a reason for this? is mod not working or problem is my world ? and can you update the discord invite if it still on to follow your work?
I love the mod but would be happy if i could play it =(
Log in to Reply

December 15, 2020 at 12:59 pm
Hello.I really like your mod, it works great for my build. And i want to make a 3D model of armor for minecraft pe as in your fashion. But I have neither knowledge nor a laptop (mine is broken), but I really want to make 3D armor. It's not hard for you to tell how you did it.
Log in to Reply