Do you like slimes in Minecraft? I do! But are you sad that there are currently only two types available in the game? I am! So this addon will aim to change that by adding over 10 new slime related mobs, as well as a new slime boss!

As mentioned above, this addon currently adds 12 new mobs, a new boss, 4 new blocks and 11 new items! Most of the new slimes will be able to spawn naturally in specific biomes. Let’s take a look at them all! 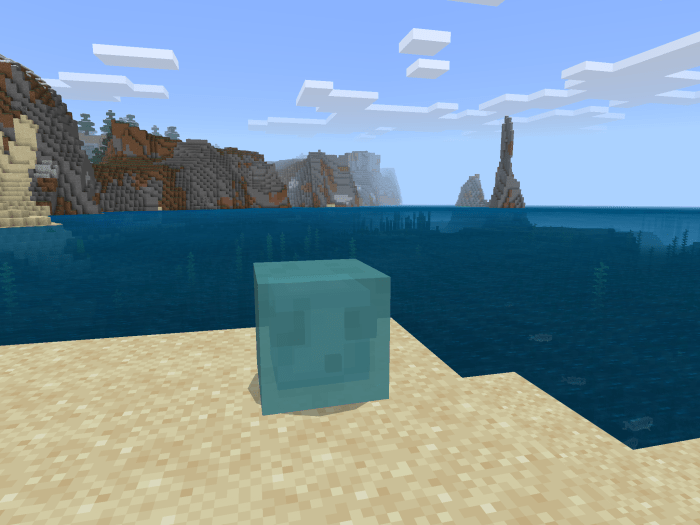 The first new slime mob is the Blue Slime. It’s probably the most basic of the new slimes added, as it’s peaceful and will never hurt you even if you attack it. They spawn on beaches and in oceans. If you kill one, you’ll get a blue slimeball. The blue slimeball has two uses; you can make it into a Frozen Slimeball by surrounding with ice or you can make a blue slime block with 9 of them! 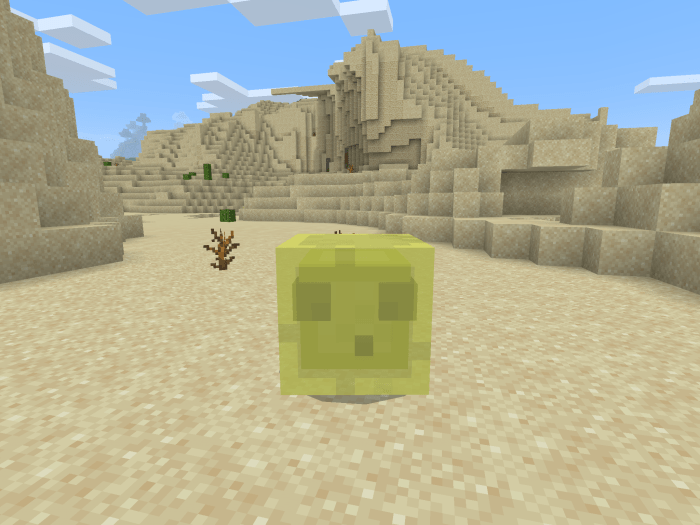 The second slime is the Yellow Slime! It spawns in desert biomes. It is able to damage you, but only if you get too close to it. Even then, they don’t deal that much damage so don’t worry. Drops a Yellow Slimeball and sometimes some sand if killed. You can make the slimeball into a new yellow slime block! 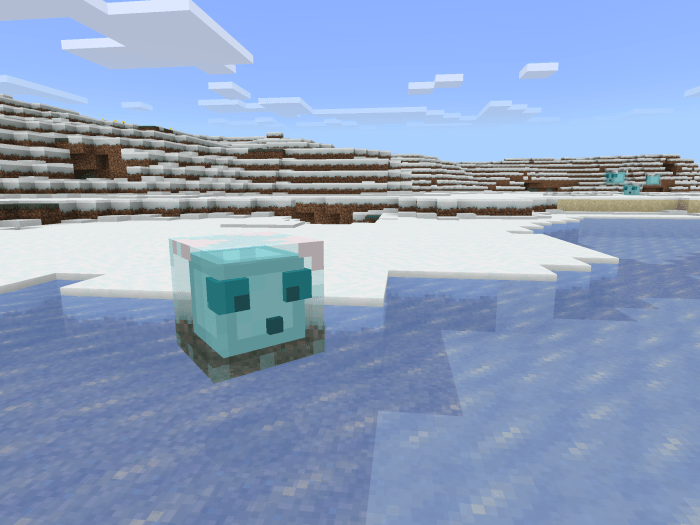 This slime is the Frost Slime. As you probably guessed, it spawns in snowy biomes. This slime is quite slow and has little health, but it’s attacks will inflict slowness on you so watch out! Killing it will reward you with some ice or an ice slimeball. Use the ice slimeball to make a Frozen Slime Block. It’s like the opposite of a honey block, it has incredibly high friction so you will run super fast while on it! 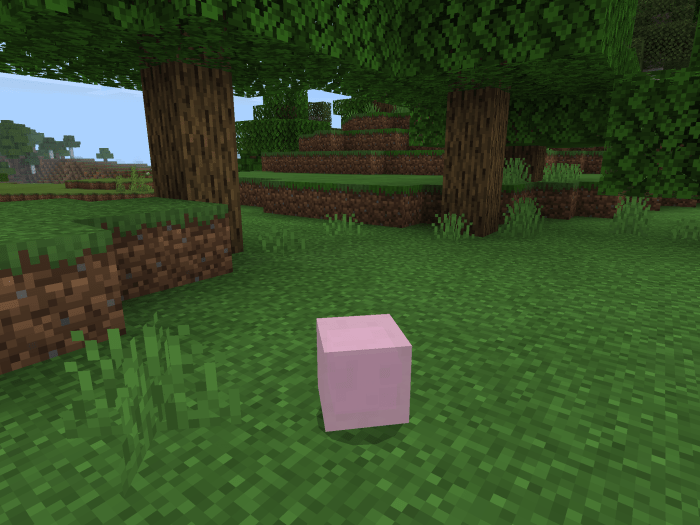 Next up: the Pink Slime! This is a TINY slime, definitely the smallest one of the bunch. However, due to it’s high cellar density, it has over 100 health points! It’s also incredibly fast, but deals a very small amount of damage. This slime was actually inspired by the Pinky enemy from Terraria. Killing it gives you a Pink Slimeball, use 9 of them to make a sticky pink slime block! Pink Slimes will spawn in flower forest biomes. 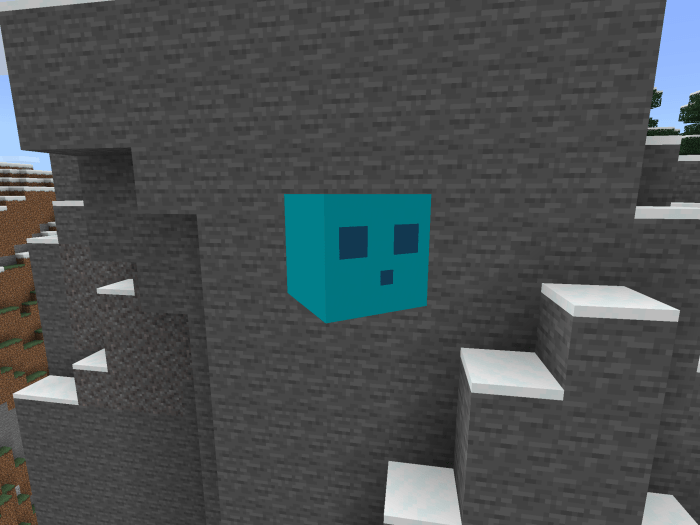 Here is the Heavenly Slime. It’s a slime that somehow learnt how to fly! Because they are so busy flying, these slimes will never attack you even if you attack them. They spawn in the extreme hills biomes, and may drop a feather or a blue slimeball if killed. 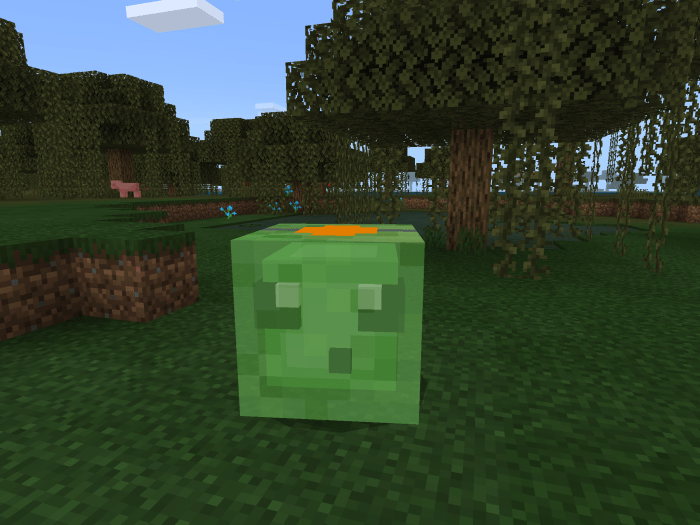 The next new slime is the Friendly Slime! As it’s name suggests, this slime is also peaceful and won’t ever attack you. In fact, you can ride on top of them! To control them, hold a regular stick and the friendly slime will go in whatever location you are pointing. Unlike horses, they can float on water while you are riding them and can climb blocks fairly easily! You’ll see friendly slimes in swamp biomes, and killing them will give you a saddle. But please don’t kill them, you monster. 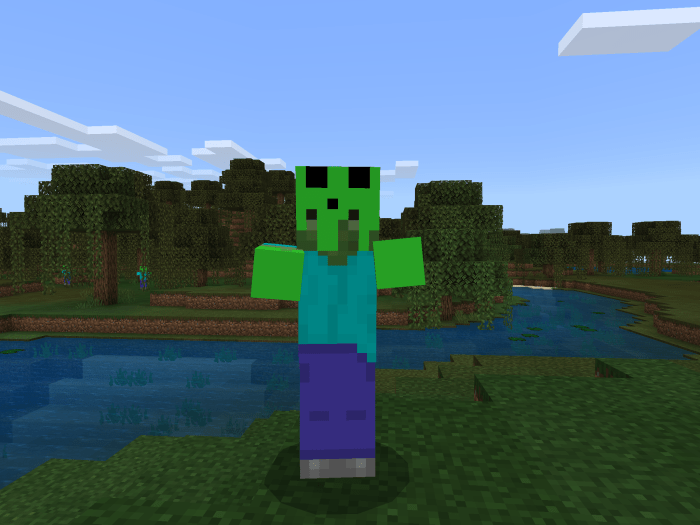 On the topic of swamps, this mob right here is the Slimed Zombie! As you probably already noticed, it’s not a slime. But it is a zombie that’s covered in slime, so it’s close enough! Because they are covered in slime, it means they won’t burn in the sun and have some extra health! They will attack you and deal more damage then a normal zombie. If you kill one, you might get some rotten flesh or a slime block. They spawn in extreme hills, dark oak forests and swamps 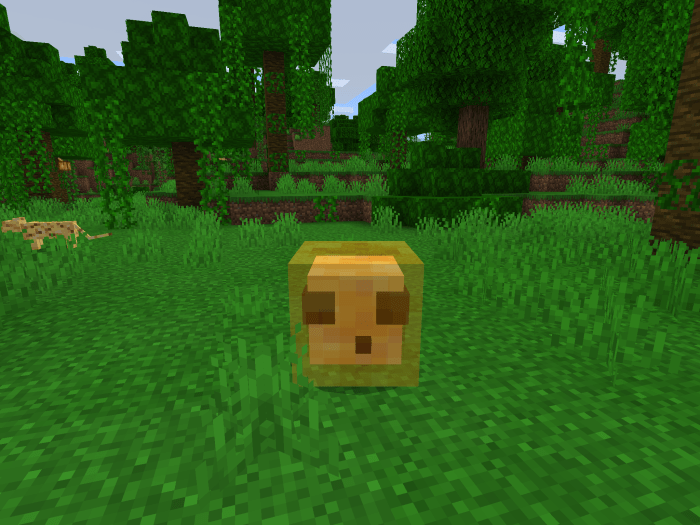 Here is a Honey Slime. This sticky slime will be found in jungle biomes! As it is very sticky and dense, it has quite a lot of health! Additionally, their attacks will inflict slowness onto you. Killing one will give you a Honey Slimeball or a honey block. You can turn a honey slimeball into some extra honey! 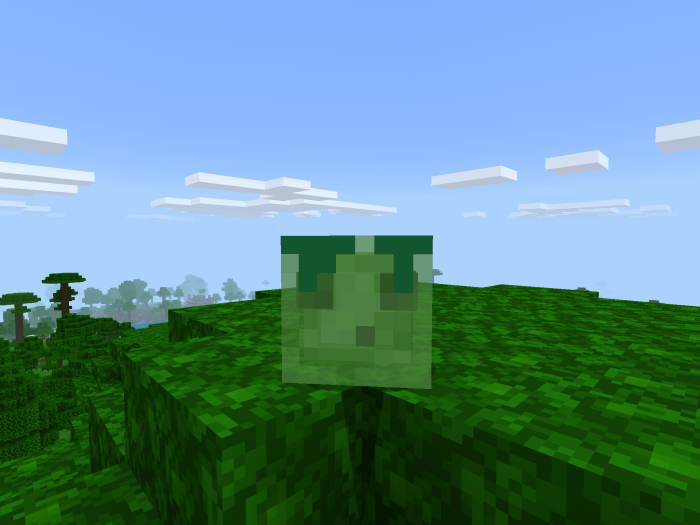 The next new mob is the Mossy Slime! It’s...well... it’s a slime covered in moss. But it is quite dangerous! Their attacks do a fair amount of damage and will poison you for a bit. If you kill one, it drops a Mossy Slimeball. Mossy Slimeballs don’t have any use for now, but you can craft one with some vines and a slimeball! Mossy Slimes spawn in the jungle. 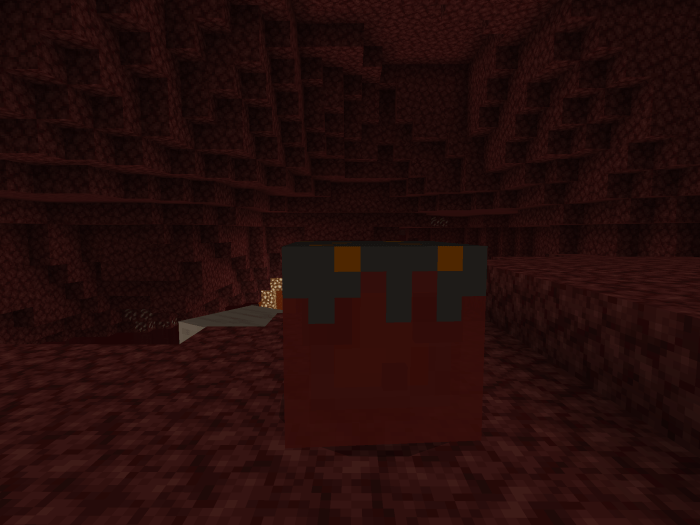 Now up next is the Fiery Slime. They spawn commonly in the Nether. Please be careful around them, as they are very powerful for just a slime! Their attacks do quite a lot of damage and will inflict blindess on you. Of course, being a nether mob, they are immune to fire. Managing to kill one will reward you with a Fire Slimeball. The fire slimeball is non functional...for now... 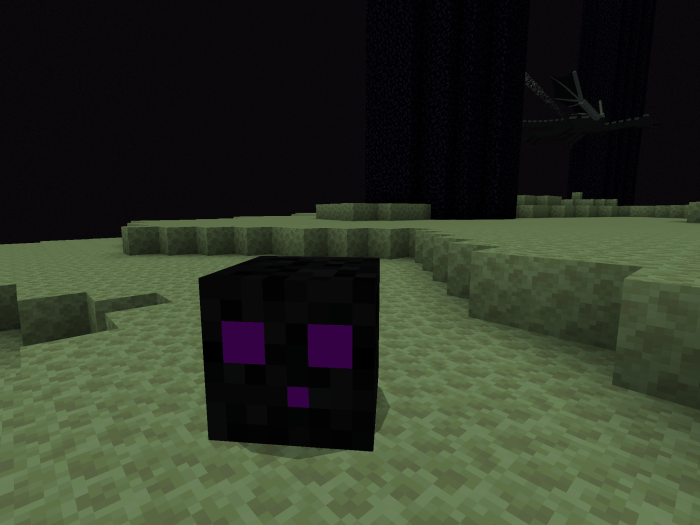 This is the Ender Slime! Ender Slimes are definitely a major threat you’ll need to watch out for while exploring the End. They can teleport, and their attacks do a LOT of damage and will weaken you. They drop an End Slimeball if killed, which does nothing as of right now. 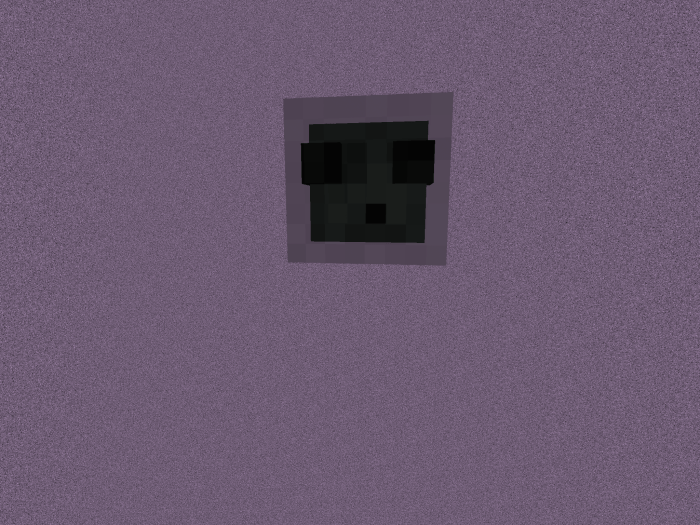 Up next: the Void Slime. This slime actually doesn’t spawn anywhere for now, as I don’t quite know where it should spawn. They cannot move from the block they are spawned on, but they will attack you by shooting projectiles at you! Void Slimes currently do not drop anything but experience 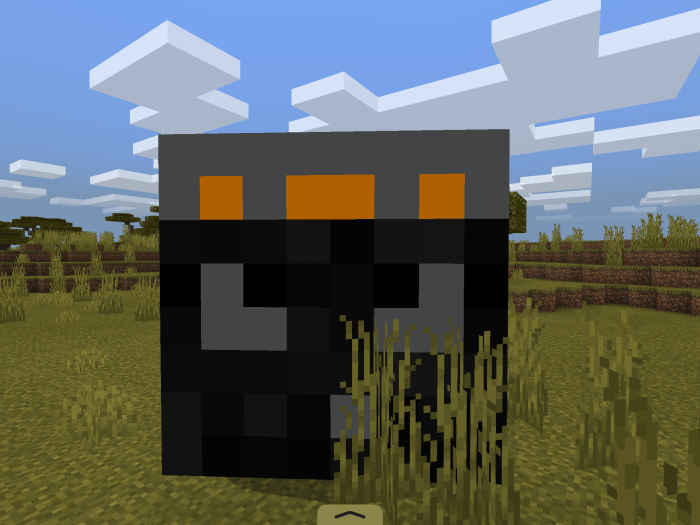 Now let’s look at the boss! The boss is known as the Colossal Slime. And it definitely shows, as this is one big slime! You could consider him the king of all slimes. The Colossal Slime has two methods of attack: the first one is just hoping towards you in an attempt to deal melee damage and the second one is to summon a bunch of slimes to attack you! It also frequently teleports around. Pro tip: the Colossal Slime hates water! If defeated, you will be rewarded with a ton of experience and a Royal Slimeball! The Royal Slimeball can be crafted into two powerful weapons, the Bane of Slimes and the Elemental Slime Bow. If you have these two weapons, it shows that you were powerful enough to take on the lord of the slimes and all his minions.

1
Dragonrider2023 December 17, 2020 at 8:46 pm
for the void slime you should make it drop void balls, that when crafted into a void slime block will pull you towards it and bounce you in the opposite direction it pulled you in from... just an idea I thought you might like to add.
🧡

1
An Epic gamer September 14, 2020 at 9:44 am
Whoops, I’ve come across a small issue with the new weapons! They don’t work properly! Especially if you have other mods on. When this addon gets updated next, the weapons will be fixed. Also you have to turn on experimental gameplay or nothing will work. I shouldn’t really have to say this because it’s pretty obvious, but you probably knew already
🧡

Magma slime I'm I a joke to you

1
GibbsX September 13, 2020 at 7:40 pm
And also you should upgrade the model of the ender slime or just replace it with the void slime's texture since the void slime is useless also the fiery slime should be scrapped since there's already a nether slime and also the texture of both the pink and king slime should be upgraded (no offence but the currently just look like shit still gunna download tho)
🧡

1
GibbsX September 13, 2020 at 7:51 pm
Ok i would take back that 5 stars if i could this addon is just lazy
The sword doesnt work, the bow doesnt work, the textures look worse in game, the flying slime can take fall damage?? And its all just a hot mess this should be a beta version becuase it looks like nothing is complete except maybe the frost and honey those are gud
🧡