This addon introduces a new type of strider which is the depth strider, the overworld version of the nether strider! You can now walk across oceans on a mob instead of a boat!

The strider is a new mob in the nether used to traverse the lava oceans of the Nether, what if the overworld had it's own version called the "Depth Strider. This new mob allows you to traverse the peaceful oceans in the most peaceful way possible!

The Depth Strider Mob looks like this and can only be spawned in with creative mode as this mob isn't as fast in water than it is on land (I tried my best, sorry). 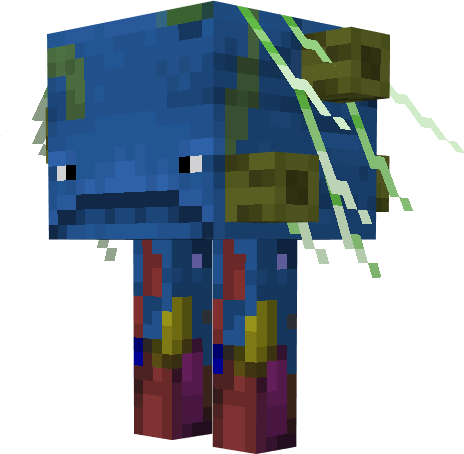 To control this mob, you'll need to create a kelp on a stick which is crafted with a fishing rod and 1 piece kelp. If you right click with the kelp on a stick while riding, you will get a boost! You also need a saddle in order to ride him, basically works just like a normal strider mob!

Here is a video explaining this mob in further detail:

July 01, 2020 at 9:41 pm
I like the addon, however I have a couple suggestions and such to improve it and a couple other ideas:
•rename the Depth Strider to Water Strider or something as the creature has a similar name to the enchantment with the same name.
•make it so they don’t spawn naturally really or they spawn so very very rare. A way you could get them is by drowning a normal strider

Now for a strider suggestion:
•Frost strider- they spawn in or near frozen lakes and areas rarely they will stride across snow and ice quickly. Upon nearing water the striders make water turn to ice so they can easily walk across.

June 19, 2020 at 6:02 am
Make when strider drowned in water it will transform into depth strider
Log in to Reply

Depth strider (enchantment): am i a joke to you
Log in to Reply

April 30, 2020 at 5:52 am
Hello your addon is so cool but you can rename it Ocean Strider or Water Strider because Depth Strider is an enchantment
Log in to Reply

April 30, 2020 at 5:10 am
Lol then it will became more faster and you can control him in underwater
Log in to Reply

April 30, 2020 at 2:54 am
If possible make a zombified strider . It is much faster than normal striders but gives you nausea when you ride it .
Log in to Reply

April 30, 2020 at 2:50 am
Make an end version of the strider . The depth strider although great is just a horse . An ender version will be good .
Log in to Reply

May 04, 2020 at 2:32 pm
END VERSION OF THE STRIDER? What's the point of that? I mean where on End would End Strider traverse to since there's no water neither lava there? It would just fall into the End's void. ?
Log in to Reply